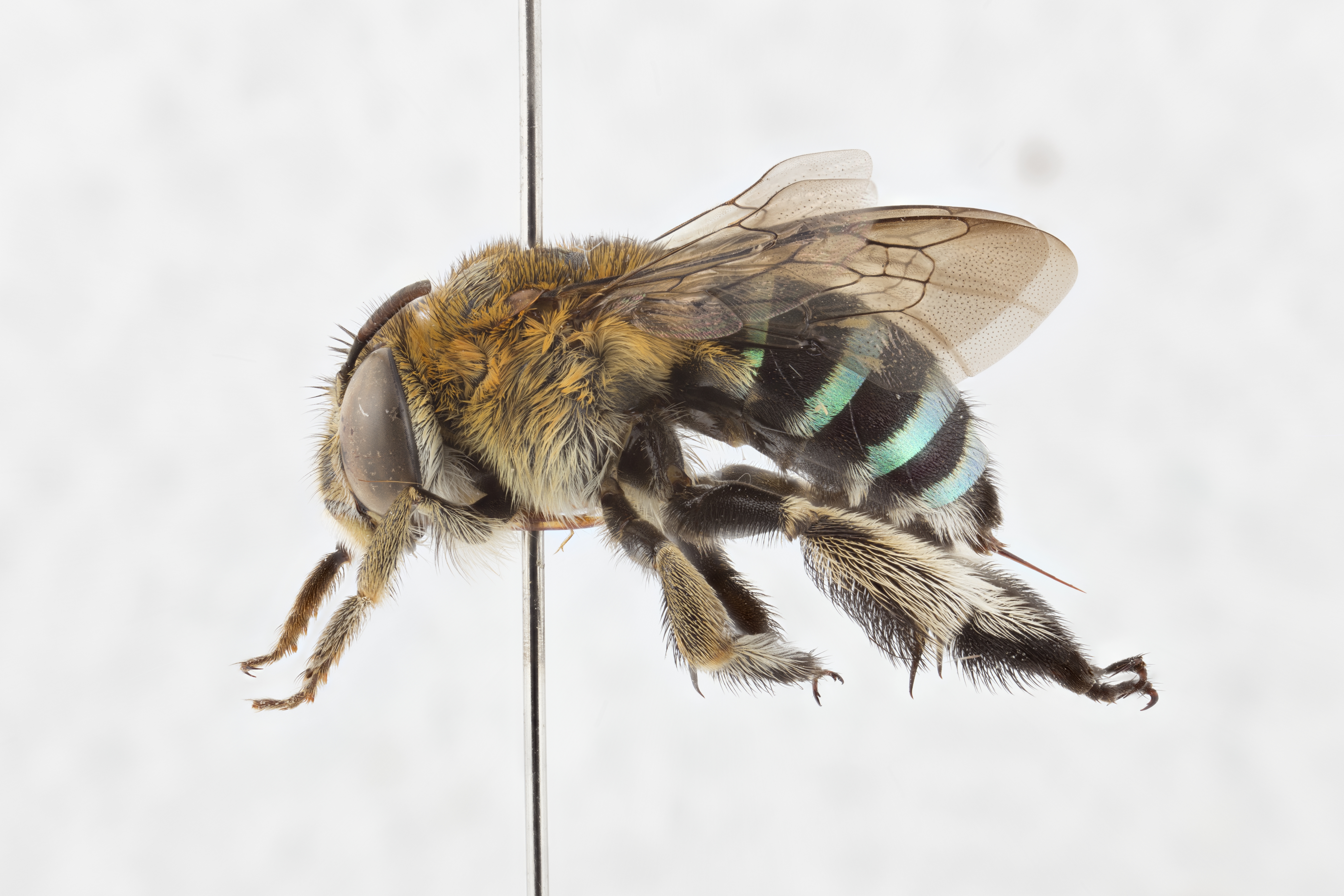 When one thinks of bees, the image that comes to mind is that of the typical honey bee, with its trademark black and yellow abdomen. However, there is a large variety of bees that do not follow this form, of which many can be found in Singapore. One such example is the Blue-banded bee (Amegilla zonata) which, as its name suggests, has blue bands on its abdomen instead of yellow.
“Blue-banded bee” can actually refer to many different species within the genus Amegilla which share this characteristic blue banding. Amegilla spp. are found strictly in the Old World

. They are largely similar to and can be confused with bees of genus Anthophora, but Amegilla is easily differentiated by its lack of arolia, which are padlike projections between the tarsal claws

.
Due to the relatively large distribution and snumber of species in Amegilla, it is further divided into 11 subgenera. Amegilla zonata is placed in subgenus Zonamegilla, and is the type species of this subgenus

Through this webpage, I hope to be able to showcase a remarkable and unique bee species in Singapore, and show that not all bees are like the more commonly known honey bee.

The species name zonata is derived from the Latin “zonatus”, which means either “belted” or “zoned”. This likely refers to the distinct metallic-blue bands on its abdomen. Its common name directly refers to this feature on the abdomen as well.

The following characteristics can be used to differentiate Amegilla zonata from other bees, whether in Amegilla or other genera

. For reference, a diagram showcasing the morphology of a typical bee can be found here. 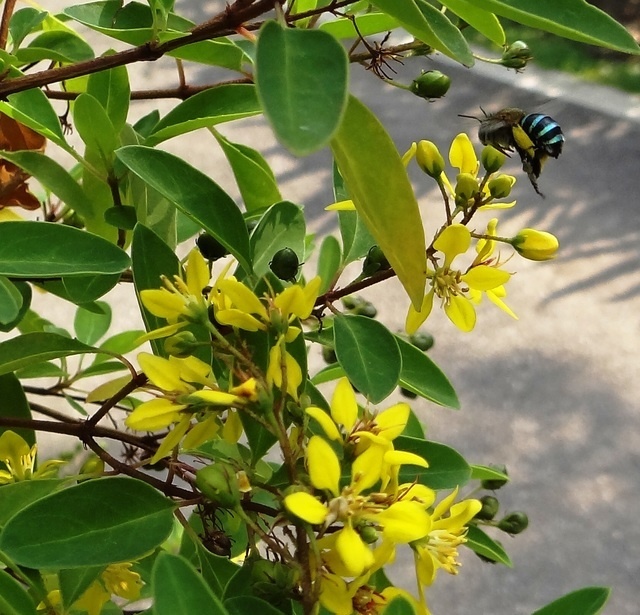 Amegilla zonata shares many resemblances to other Amegilla spp., particularly those in subgenus Zonamegilla. In Singapore, we are able to find one other species of Amegilla, namely Amegilla korotonensis. Fortunately, these two species are relatively easy to differentiate through the following characteristics:

Amegilla zonata employs buzz pollination in order to obtain pollen from flowers, a method not employed by honey bees. This involves grabbing onto the anthers of the flowers and vibrating the wing muscles at the right frequency to dislodge the pollen

. We can see an example of buzz pollination in Video 1. The pollen is then gathered on the hairs of the hind legs of the bee

. A. zonata is also able to use its relatively long proboscis to feed on nectar at the base of the flower

, which means that it regularly visits the same flowers for food. In Singapore, A.zonata can be observed visiting flowers such as Melastomamalabathricum (Fig. 9), Asystasia gangetica

, and Galphimiaglauca (Fig. 10). They forage diurnally, but can be found more frequently during the late morning hours

Amegilla zonata serves an important role in most ecosystems by pollinating various flowers. It has been found to be especially important in tropical rainforest understories, which lack the large quantities of eusocial bees normally found in forest canopies

. Bees like A. zonata are particularly important as their target flowers may not be able to be pollinated without this buzz pollination. Many of these flowers even form specific relationships with their respective pollinators, further highlighting the importance of A.zonata in such forest settings.

Amegilla spp. have also been found to be effective at pollinating crop plants, such as tomatoes, under greenhouse settings. Such an ecosystem service would allow us to cultivate certain crops in Singapore and slightly alleviate our reliance on importing food. This also removes the need to import potentially invasive bees, such as honey bees or bumblebees, as A.zonata can be readily found in Singapore

While the honey bees typically construct nests with hexagonal honeycomb cells, Blue-banded bees do things differently. Like most Anthophorine bees, Amegilla zonata builds its nest by burrowing into the soil

. While they are solitary bees, they often nest together in nearby burrows

. Various bees of Amegilla spp. may even be seen nesting together

. It has been suggested that pheromones released from the Dufour’s gland into the excavated soil may attract other females to nest

. Aggregated nesting appears to lend an advantage against destruction, predation, or parasitism

. Individuals have even been found returning to successful nesting sites of previous generations

The burrows branch into individual cells, which are lined by secretions from the Dufour’s gland that later solidify into a waxy layer

. The female then lays an individual egg into each cell, depositing it onto a provision of nectar and pollen. The female then closes up the cell with more of the waxy lining. The nectar, pollen, and even the waxy lining act as food for the larvae when it emerges. We can contrast this with the honey bee, which uses the nectar it collects to create honey, which is then fed to its larvae

. One might argue that the pollen and nectar mixture that A. zonata produces reflects a rudimentary form of honey production in Anthophorine bees.
Males, on the other hand, do not nest in burrows, nor do they assist in the excavation. Instead, males rest on plant stems by grabbing on with their mandibles

. We can see this behavior in Video 3.

Amegilla bees are known to be targeted by kleptoparasitic Thyreus spp., commonly known as Cuckoo bees

. Thyreus bees break into the cells of the host nest, oviposit in it, and seal it back up with earth. The larvae then hatch and take advantage of the food deposited by the female A. zonata

. Thyreus bees also possess blue markings and bandings on their abdomen, which may serve as a form of camouflage against Amegilla. This has led some to propose that Thyreus may have evolved from a common ancestor as Amegilla, hence their similar colouration and associations, although this hypothesis lacks strong evidence thus far

Besides Thyreus spp., Amegilla spp. have been observed to be parasitized by insects from other Orders, such as Diptera (Miltogramma sp.) and Coleoptera (Zonitis sp., Trogoderma apicenne, Lusioderma serricorne). Some cells have even been found with fungal colonies that feed on the deposited food and the larvae itself

Amegilla zonata have been described to be found throughout India, Myanmar, Sri Lanka, extending through the Malayan peninsula to Australia

. There have also been records as far north China and Taiwan, however these may be misidentifications as many Zonamegilla species share strong resemblance

Amegilla zonata can be found at the locations in the below map. Data is obtained from National University of Science Bee Lab (collected by J. S. Ascher, S. H. Chua, S. X. Chui, K. Y. Ng, Z. W. W. Soh, E. J. Y. Soh, J. W. T. Tan, and K. S. Yow). As we can see, A. zonata can be found at many parks and secondary forests ranging throughout Singapore, so keep a look out for them the next time you are in a park or our nature reserves.