The White-breasted Waterhen is a bold bird that can be often seen foraging openly in both natural and urban habitats such as wetlands, mangroves and even canals.

It has a loud, distinctive call that can often be heard in the evenings (Figure 2).

This bird is considered a native species in Singapore and is also found in many different countries.

According to the IUCN Red List, this species is catagorized as Least Concern (LC).

Figure 2: Call of the White-breasted Waterhen (Taken from Lena Chow)

The genus name Amaurornis is derived from the Greek words amauros, meaning dusky or brown, and ornis meaning bird, while the specific epithet phoenicurus is in reference to its red tail.

The White-breasted Waterhen is also native to several countries (Figure 4).

The adult White-breasted Waterhen can be identified by its yellow legs, light green bill, red vent and grey feathers all over its body except for the face, throat and abdomen which are white (Figure 5). 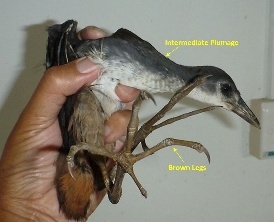 Juveniles have plumage which is an intermediate of the adult and chick, and can be distinguished from adults by their size and brown feet (Figure 6).

The White-breasted Waterhen chick can be identified by it black downy feathers, black legs and absence of white colouration at the throat and abdomen (Figure 7).

This species has been recorded in a wide range of habitats such as wetlands, mangroves, marshes, coastal areas, grasslands, gardens, parks and canals.

However, this species has been declining in number due to the loss of the habitat caused by urbanization and the removal of water bodies due to the threat of dengue in Singapore.

The White-breasted waterhen has three main foraging strategies, and the strategy they use depends on the location of their feeding habitat, size and diet.

These strategies are foraging and feeding while walking (to capture insects), while wading (to consume mollusks and fish) and while running.

They maximize foraging after overnight fasting at night by foraging actively before noon, with peak feeding obeserved during early morning.

After the first bout of feeding, these birds would then hide to avoid conflicts with other birds.

Water is essential for the breeding and rearing of chicks in the White-breasted Waterhen, therefore egg nests and brood nests are found near water bodies.

Vigorous calls and fights occur among the birds in the morning and evening and this eventually leads to pair formation.

Once the pairs have formed there is a long courtship period which includes bowing, billing and nibbling displays. Finally, the male mounts the female at the end of the courtship period.

The breeding pair then look for nesting sites and occupy and defend their territory early in the breeding season.

The pair then proceed to make nests and eggs are laid consectively in the morning once the nest is completed.

The breeding pair is also more aggressive in defending their territory after egg-laying.

Both parents participate in incubation of the eggs, which can last from between 19 to 21 days, and all eggs hatch on the same day.

Once the eggs have hatched, the breeding pair proceeds to make a brood nest, which is larger than the egg nest, within its territory.

One parents would roost with the chicks in the brood nest.

Figure 13: Early description of White-breasted Waterhen by Pennant (1769) that was published in Indian Zoology (1790).

In Figure 13, the White-breasted Waterhen is described as the "Red-Tailed Waterhen (Gallinula phoenicurus)" which is a synonym for Amaurornis phoenicurus.

The White-breasted Waterhen (Amaurornis phoenicurus) was originally described by Pennant in 1769 and the syntype series consisting of four syntypes can be found in the British Natural History Museum, under the name "Red-Tailed Waterhen (Gallinula phoenicurus)" (Images not available).

A hierarchical summary of the taxa within which the White-breasted Waterhen is placed is provided below:

The White-breasted Waterhen belongs to the family Rallidae, also known as the "family of wading birds".

It also belongs to the genus Amaurornis and according to prior morphological analyses, this genus is considered polyphyletic (derived from more than one common evolutionary ancester or ancestral group).

Species of birds found in the genus Porzana are often confused with the species found in Amaurornis because the distinctions between these two genera are poorly defined, and this often leads to confusion.

There have also been instances where some species of Amaurornis were previously placed in Porzana and vice versa.

To resolve the confusion, a study was conducted in 2012 to determine the phylogenetic relationships among the Asian rails found in Rallidae.

This study was conducted using mitochondrial DNA sequences of Cytochrome c oxidase subunit I (COI) and cytochrome b (CYTB) sequences, and these sequences were aligned using Clustal W, Maximum Parsimony analysis and Bayesian anaylsis and the tree in Figure 14 was obtained.

Four well supported clades are obtained and these results show that the genus Amaurornis is polyphyletic, and Amaurornis phoenicurus is closely related to Gallicrex cinerea (Watercock).