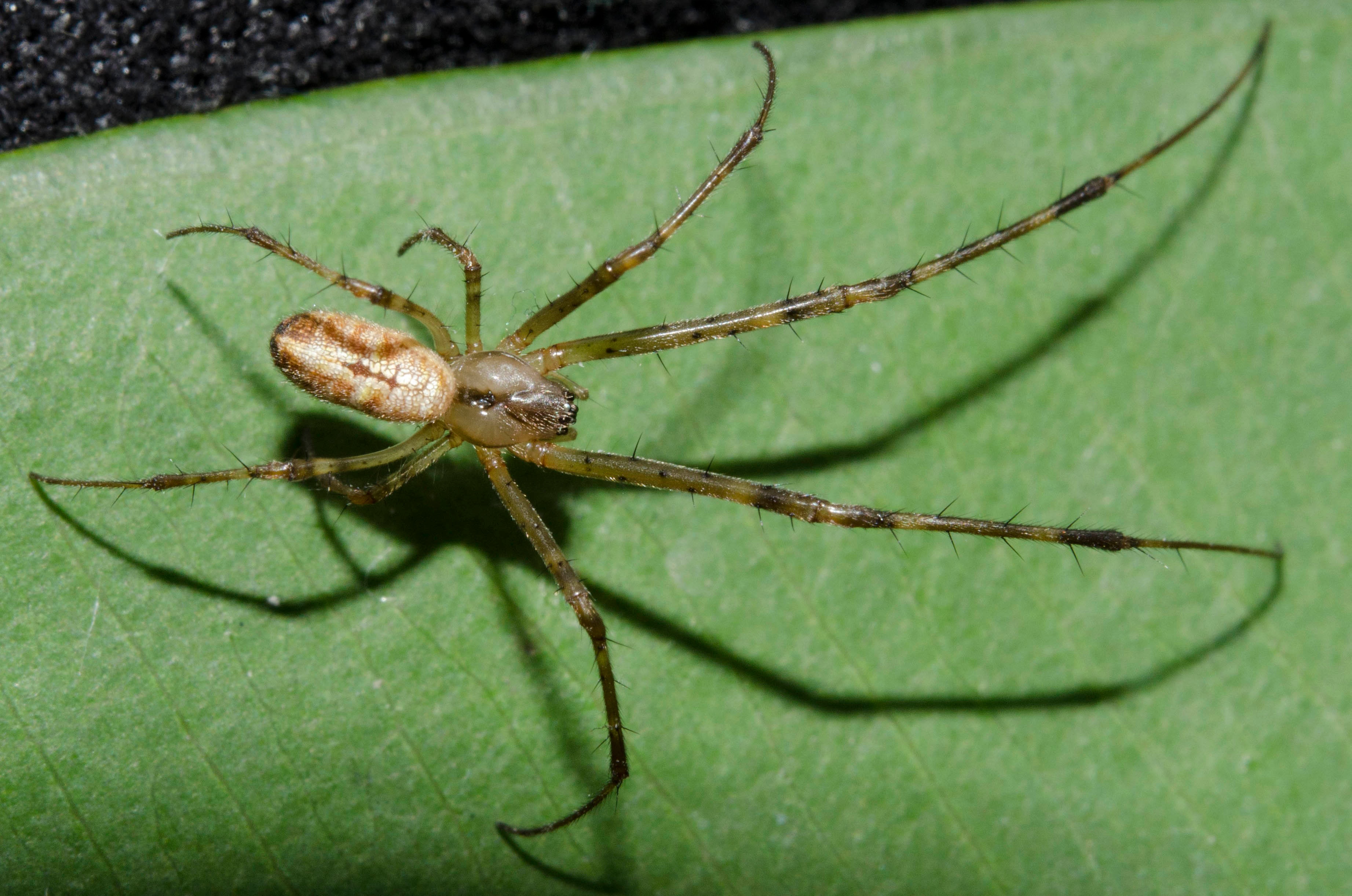 Tylorida ventralis (Thorell, 1877) belongs to the family Tetragnathidae. They are long-jawed orb weavers with long legs because they have a distinctive cherlicerae that are long and wide, and their webs are shaped delicately like an orb with open hubs. Under the genus Tylorida Simon, 1894, they can be easily distinguished from other genera of the sub-family Leucauginae from their first pair of legs, which are longer than their second pair by a ratio of more than 1.6. 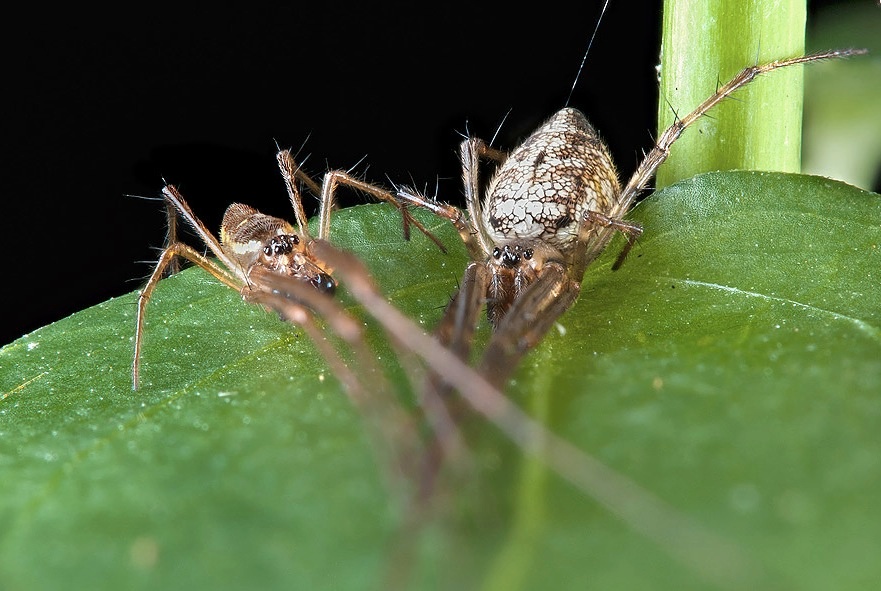 Copulation in all spiders with the exception of the harvestman (Order: Opiliones) occurs indirectly through a process called sperm induction. This process involves the transference of semen from the genitalia at the ventral side of its abdomen into its palps situated in front of its head first, before inserting the palp into the epigynum of the female located at the ventral side of the abdomen. [1]

Usually, the male will chew on its palps, which by wetting them may help with the absorption of the semen. 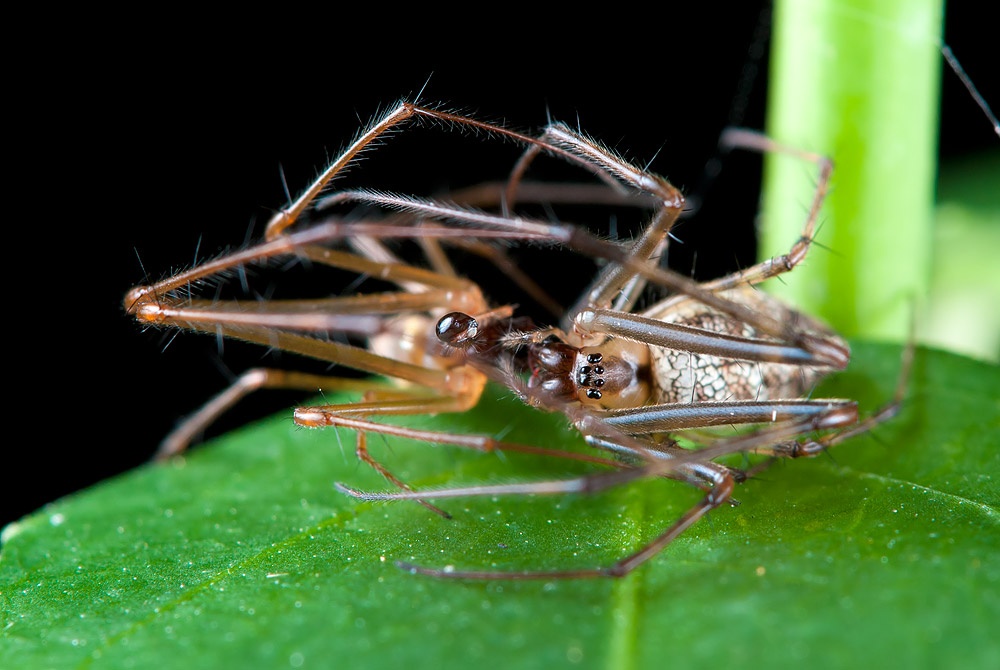 Male (left) flexing his palp on the chelicera and approaching the female (right). (Photo taken by Nicky Bay (C))

Copulation in T. ventralis usually occurs within the female's orb-web where the male will approach the female in the web and flexes his palps in a rotatory manner, which is normally a prelude to sperm induction and copulation. Contrary to the conventional notion that female spiders are reluctant or passive in sexual advances by the males and is extremely aggressive or even cannibalistic towards their partners, a study by Mafham and Cahill [2]

observed that the T. ventralis females showed positive response to the presence of males and will actively participate in or even initiate copulation. 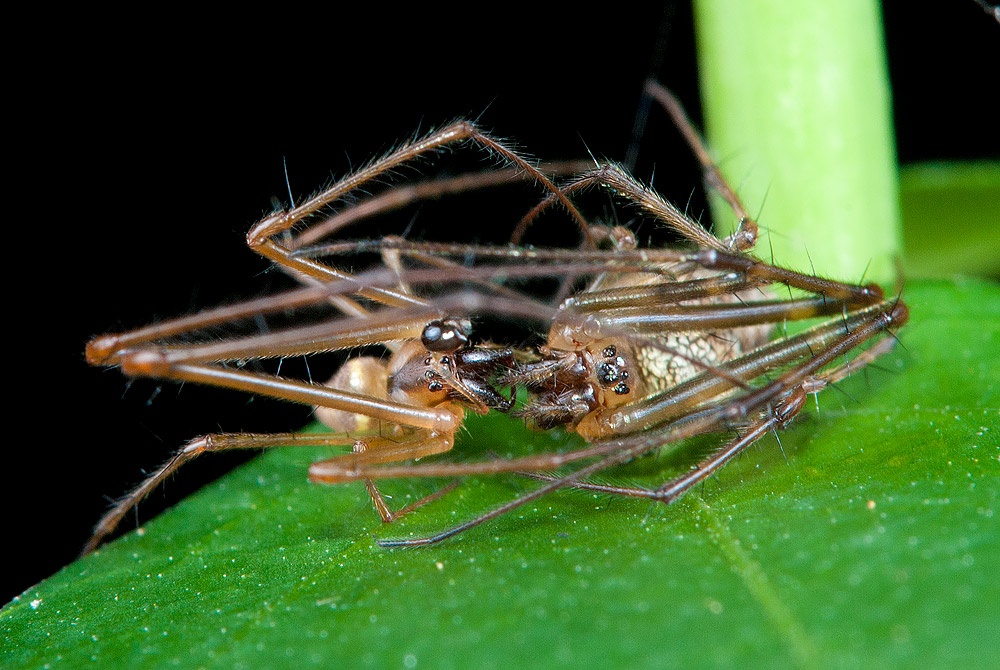 Moreover, insertion of the palp (containing the sperms) into the epigynum in T. ventraliscan be repeated hundreds of times during the mating period which can last for as long as 10 hours. [2]

This behaviour is uncommon in other species such as Tetragnatha extensa and Micrommata virescens, which will only insert its palp once. 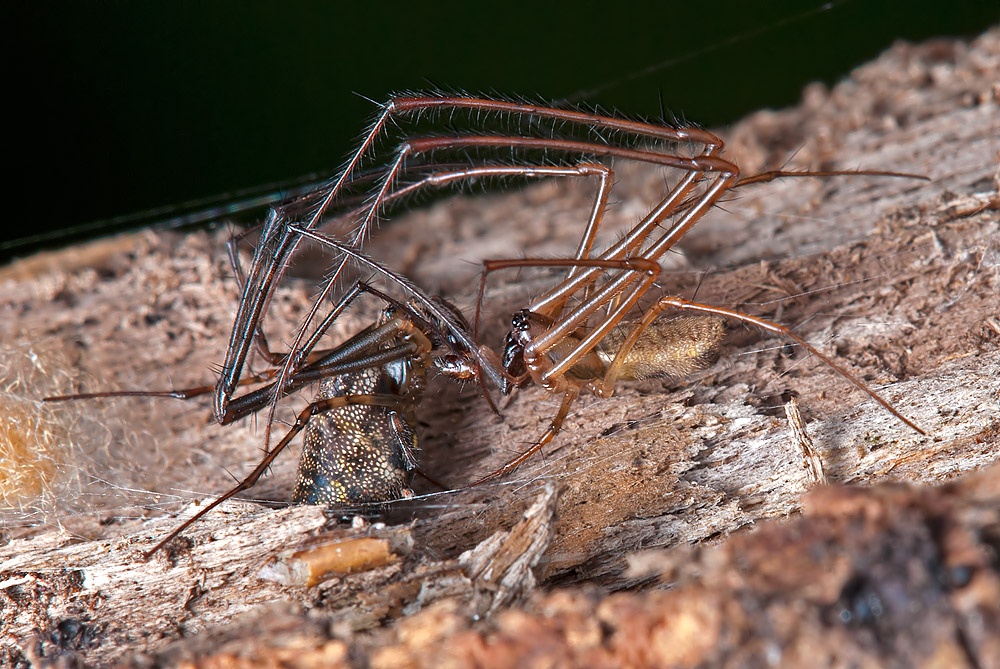 There are two possible explanations for this bizarre copulation behaviour inT. ventralis. Firstly, this behaviour seems to constitute an unusual form of mate-guarding and will prevent any further insemination by other males, thus confering higher sperm priority. Secondly, by staying in the web longer, the male derives benefits by stealing a proportion of the food meant for ovarian maturation by the female. At the same time, the female also benefits from the extended copulation by reducing the risk of predation or capture (50% reduction). [2]

After insemination, the female is able to retain the sperm mass outside of the uterus in a specialized structure (spermathecae) until the eggs are ready for fertilization.
Thus, they are able to lay several batches of eggs. She will then protect the eggs by spinning a soft layer of fine yellow silk (Tubiliform silk) as shown in the photo below. In most cases, the mother will care for the offsprings and actively secure food for her brood until they hatch. 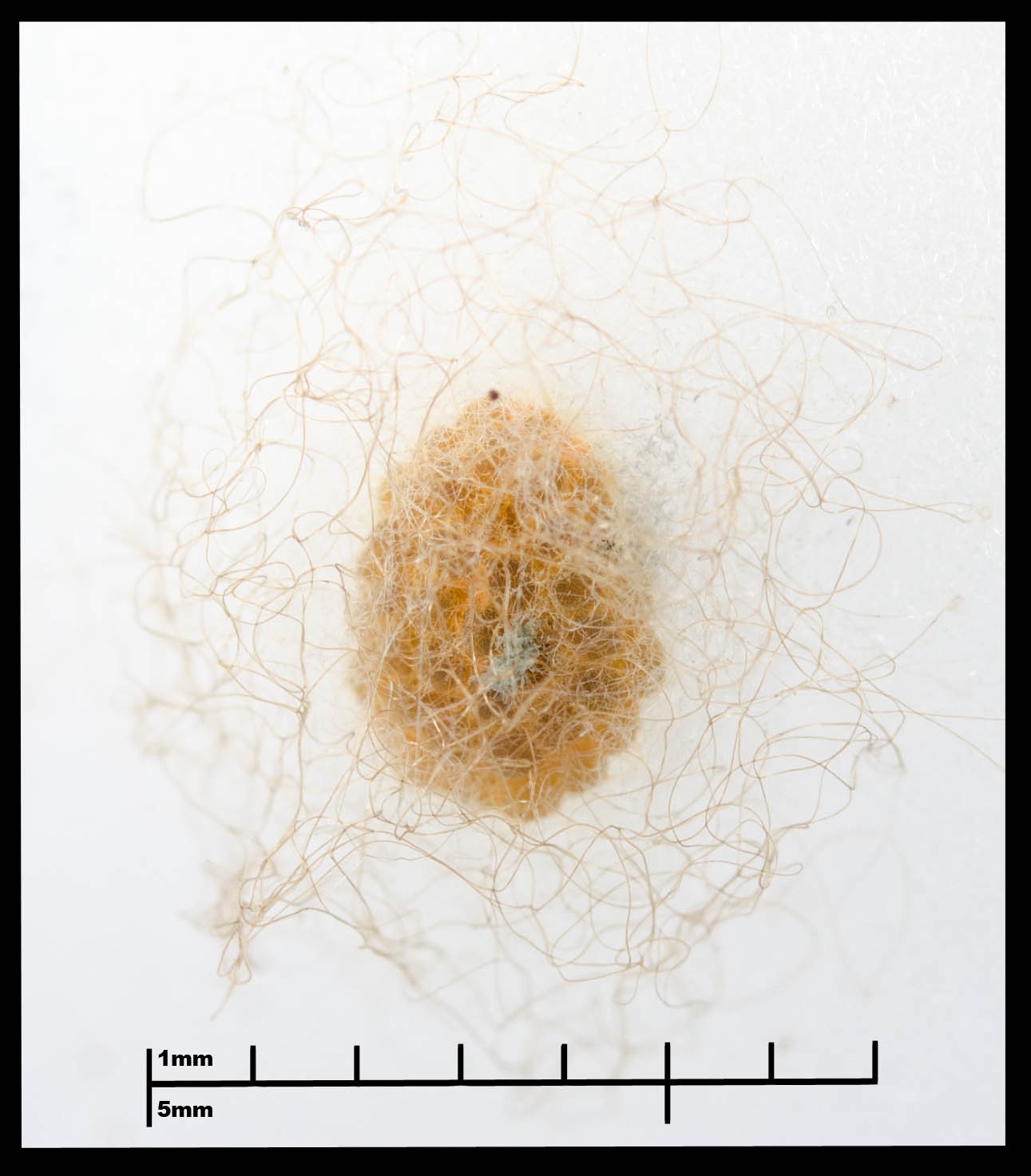 Physiology of feeding and digestion

Digestion of their prey occurs externally where once the prey has been subdued via wrapping them with silk, it will cut and mash the prey with its cheliceral teeth and pour in enzymes derived from the front end of the alimentary canal. Once the internal organs of the prey starts to liquify, it will be sucked out and more enzymes will be introduced until the internal contents have been fully digested and consumed. The liquified content will then be ingested into the midgut due to the action of the sucking stomach. Any remaining particulate solids will be filtered out through the bristles around the mouth as well as by a filter system in the throat. The final stages of the digestion and adsorption of food occur in the midgut. [1]

Based on personal observation,T. ventralis seldom feed by trapping its prey using its web. Instead, it lies motionless on its web, sensing the web tension with its trichobothrial and when the prey is within striking range, it will grab its prey and wrap it with silk.

T. ventralis are orb-web spiders and their web type can be classified under aerial ladder-webs.

These webs are often built in open vegetation such as heathland and forests.T. ventraliswill spend most of its time resting at the web's open-hub, monitoring the tensions and vibrations of the web using its sensitive trichobothrial hairs on its legs. The web hub is usually situated at the extreme top of the web, which allows equal access times to all parts of the web because it can run faster downhill than climbing upwards

. Although little is known about the foraging ecology ofT. ventralis, a study conducted onT. ventralismating behaviour has shown that the females usually construct or renew their web in the early morning, indicating that it may be the most productive period or their usual feeding period.

Tylorida ventralis are commonly found in forests and heathland, usually hiding under leaves or camouflaging against a branch. However, they can also be found in the urban areas such as in the water ducts under the streets as recorded by Jäger and Praxaysombath in Laos.  [5]

In their resting position, they can be found on orb-webs with their first pair of legs outstretched forward and close together, camouflaging like a twig or stick on the web. 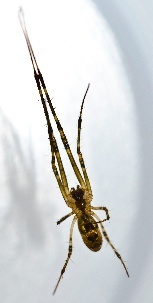 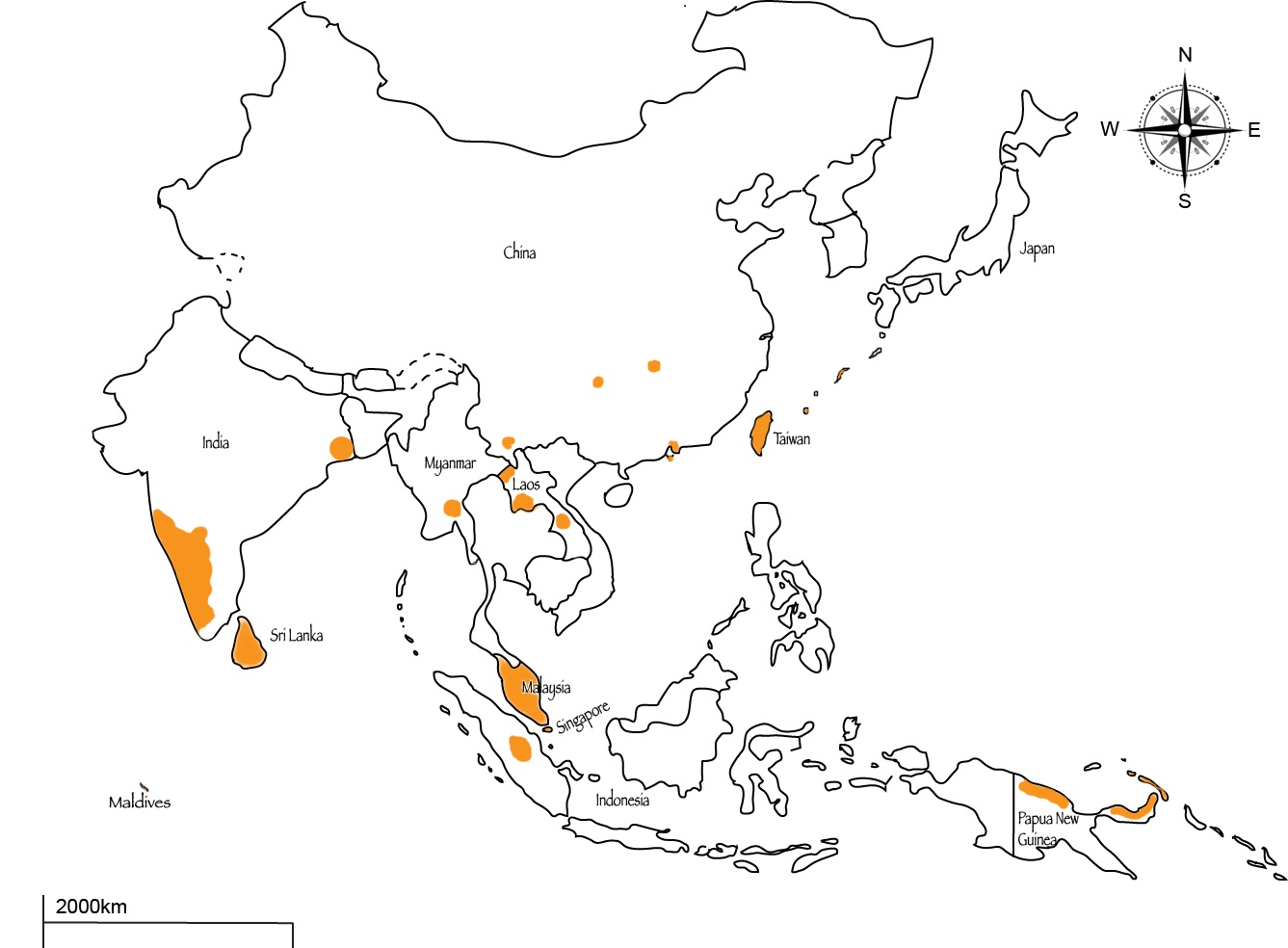 Map showing the distribution of T. ventralis (Orange parts indicate presence of T.ventralis). The distribution is based on the information of examined specimen by various authors as shown in Table 1.

Table 1 shows the information of collected specimens in various locality. 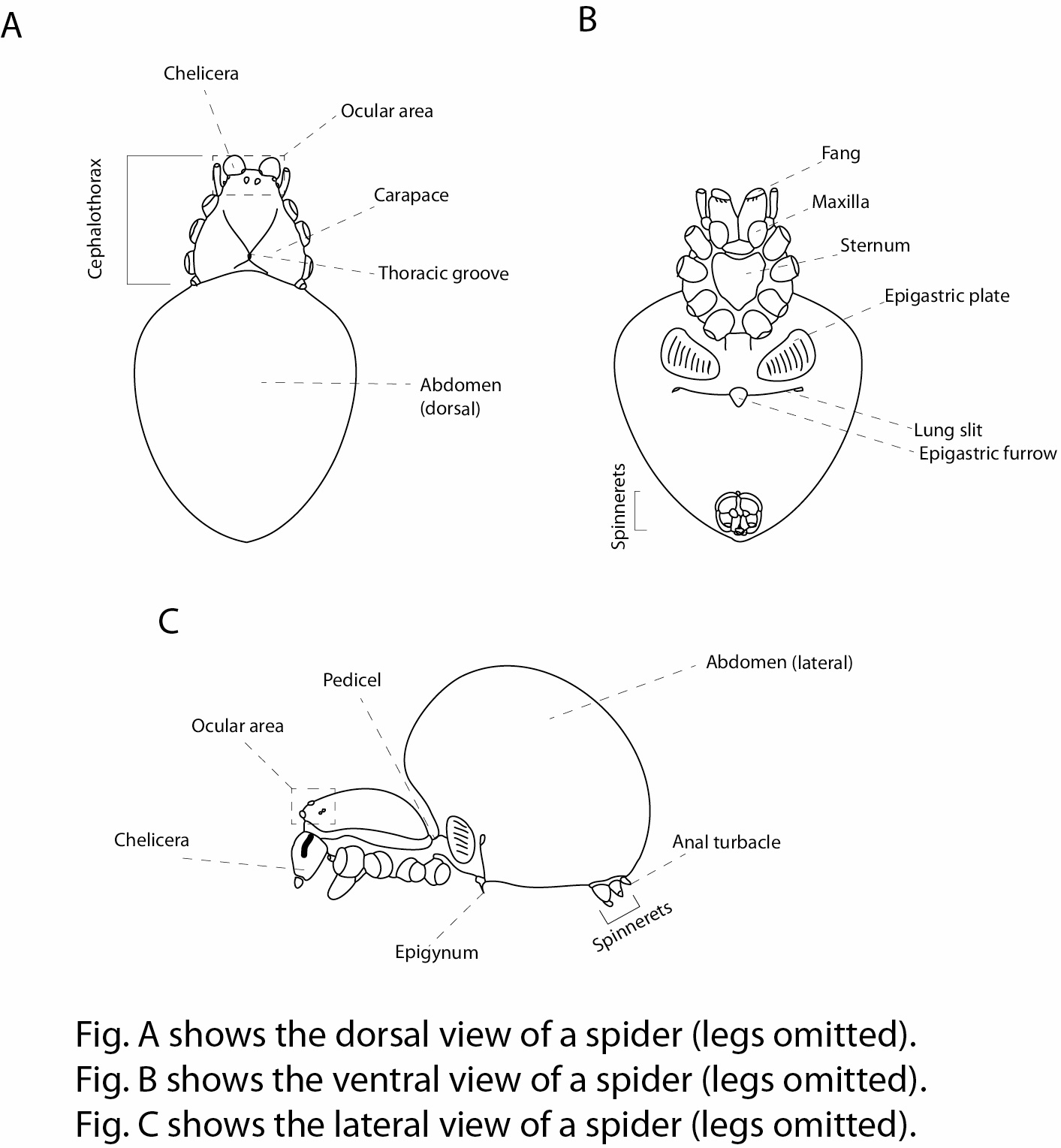 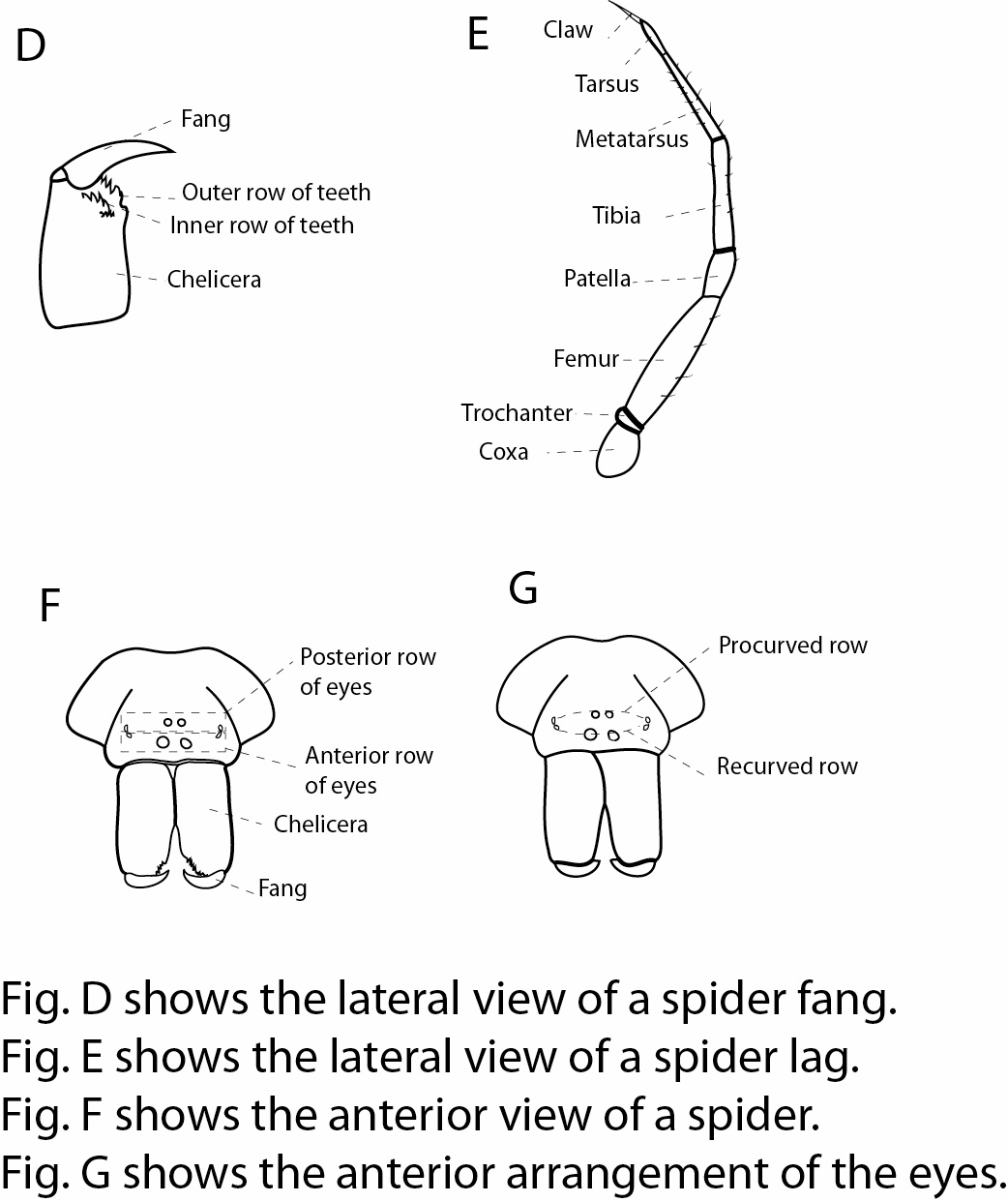 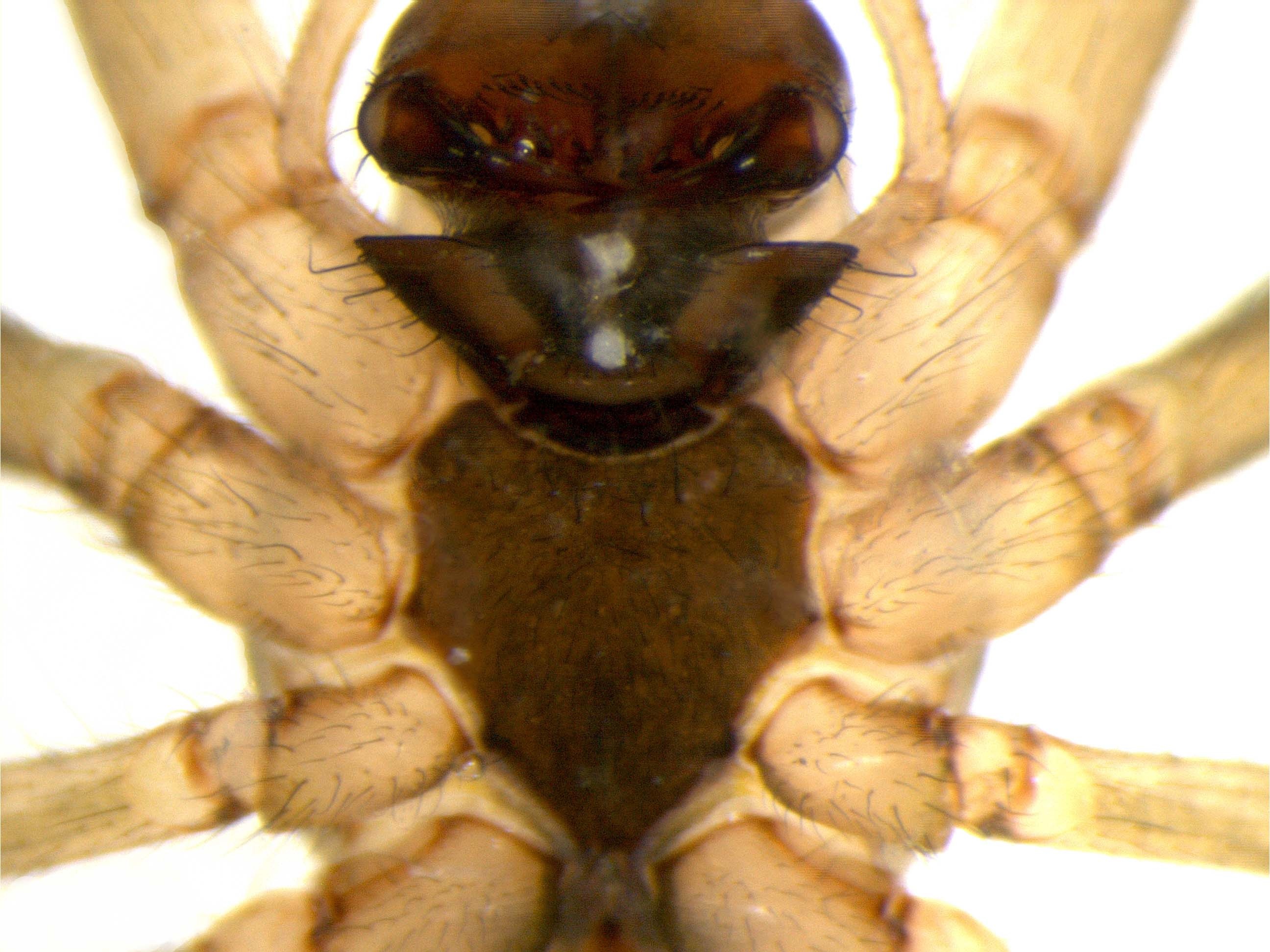 Sternum of a female T. ventralis (ventral side) (Photo by Diego (C)) 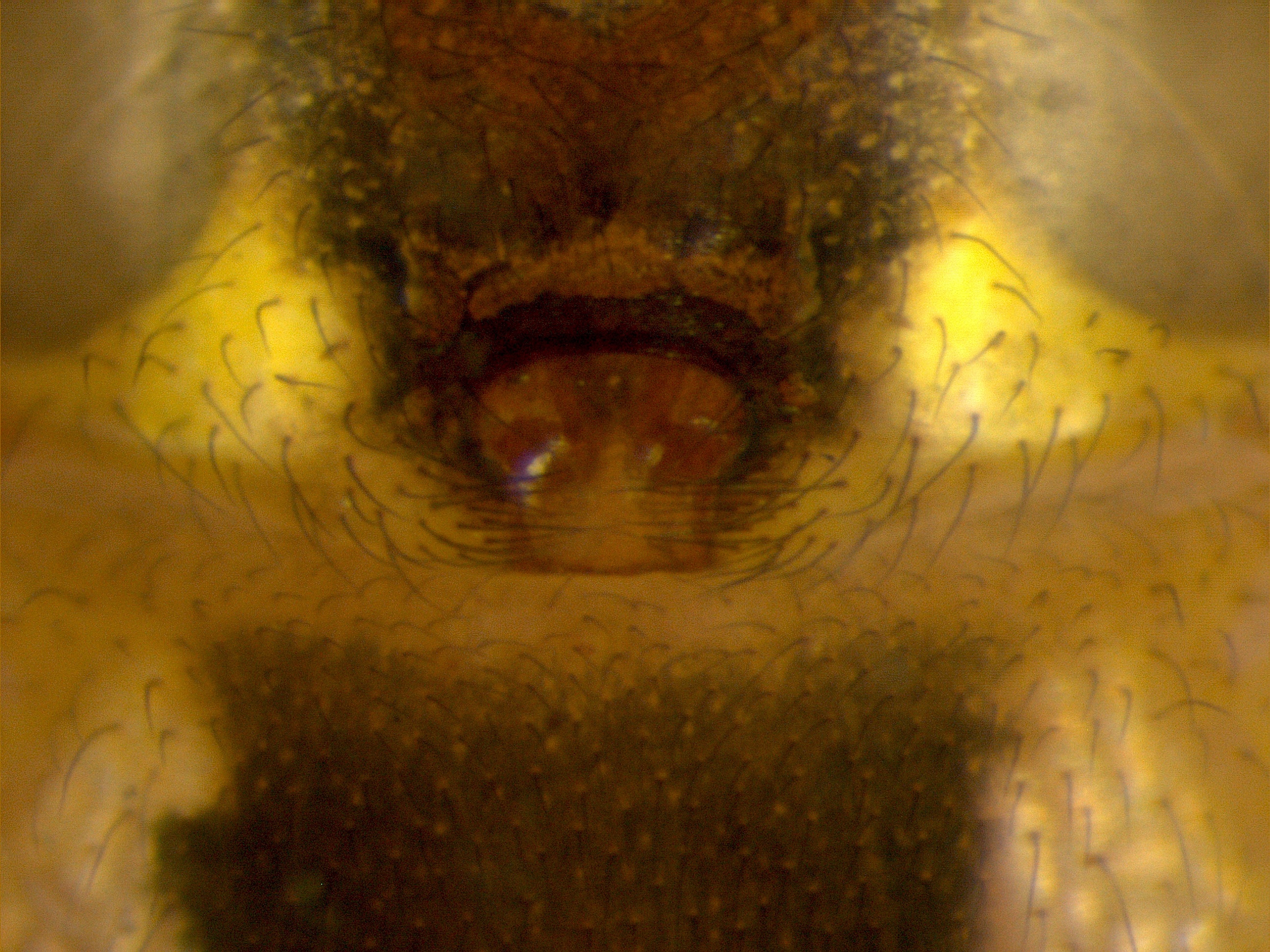