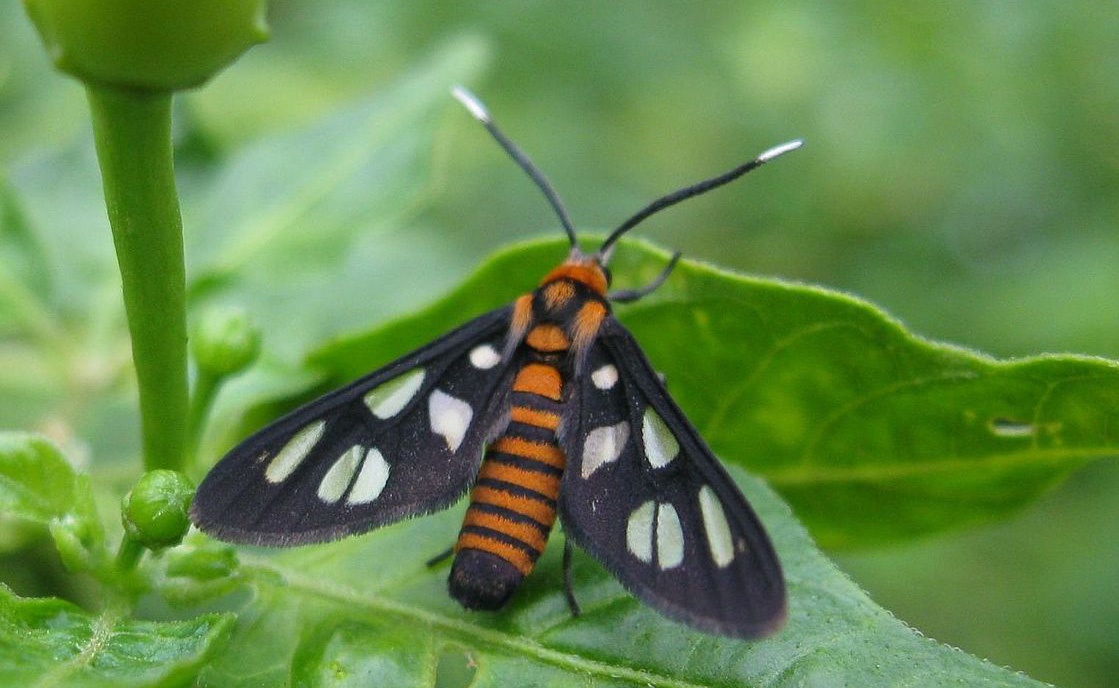 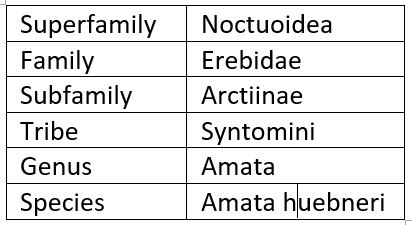 Photos, illustrations or even descriptions of the larvae, caterpillars, of the moth is very hard to find, they are however documented to feed on a rice, Oryza sativa1

. Common features of all caterpillars in Arctiinae is secondary setae that make the caterpillar fluffy 2 , hence the common name woolly bears. One article lists Amata huebneri as a minor species attacking Mikania micrantha, a mile a minute weed, in peninsular Malaysia 3 .

There is no formal documentation on adult feeding habits 4  but videos and photos show them feeding on, and therefore pollinating a variety of flowers. The species can be found in various places around Singapore, this video is showing Hübners wasp moth feeding with its probiscus on a coatbutton flower, Tridax procumbens.

As its common name suggests Amata huebneri is a wasp mimic. Other genera are made unpalatable or poisonous due to their diet 4 , however, no species of Amata are known to be so. Therefore Hübners wasp moth is likely a batesian mimic despite its diet being largely unknown, predation is reduces even though the moth itself is eadible since predators learn to avoid eating thing with this color and pattern.

Amata huebneri copulates, as most other moths, facing opposite directions with posterior ends of abdomen meeting 5 as in the video below. Wings are held horizontally which is common among Amata species 5 . In most cases the females head will be pointing upward (to the sky) during copulation, one source indicates that this might not be the case in Amata huebneri but results are not conclusive 5 .

The conservation status of Amata Huebneri has not been assessed be IUCN 6 . Likely the species is currently of least concern but it is concerning that we know so little of its life cycle. It is notable that the caterpillars have been found to feed on rice since this might be of economical importance would the species to become a pest under particular circumstances. Hübners wasp moth caterpillars must, however, have some other host plant in Singapore since they are reproducing here as well. What this plant or plants might be is unknown as far as I know.

A. huebneri is present in most of south-east Asia, including Singapore, as well as in northern parts of Australia 7 .

The only other Singapore native species that might cause misidentification is Amata dilitata. This species has similar wings and pattern but is brown rather than black, with yellow windows and only one large window on the hind wing 8 .

It might also be confused with Amata trigonophora since the pattern of body and wings are fairly similar. Amata trigonophora is not native to south east Asia but the species might overlap in north-eastern Austrailia. A. trigonophora can however easily be distinguished by larger size, it has a wingspan of about 30 mm 9 , and by the yellow coloration of its wing windows.

Amata passali is native to India and Sri Lanka which mean that its distribution might overlap with A. huebneri in these places and the species seem to often be mistaken for each other. Amata passalis can be recognised be the different patterns of the wings, by having two orange lines on the over side on the thorax and by being larger, 36-44 mm10 . The video bellow claimings to be showing egg laying in Amata huebneri, based on the apperance of the moth and the fact that it was filmed in India it is likely not A. huebneri but A. passalis. In any case it is a nice video of egg laying in Amata. 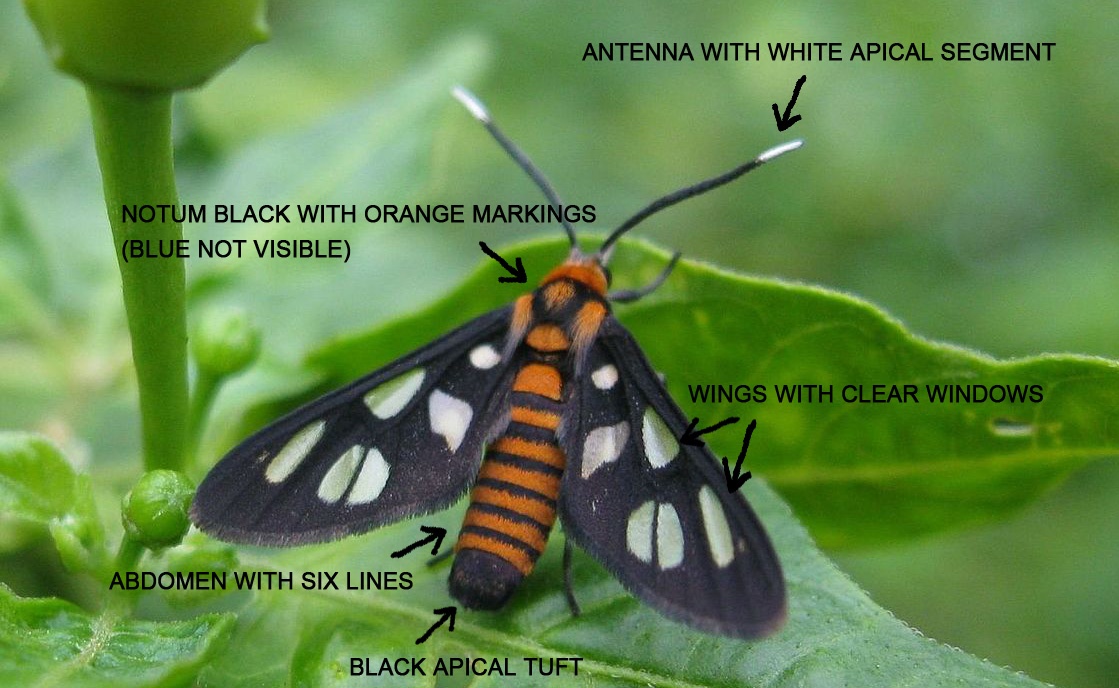 Amata huebneri is small moth with a wingspan of 22-24 mm 11 , black with orange markings. Important morphological features are summarized in the table and in the picture to the right. 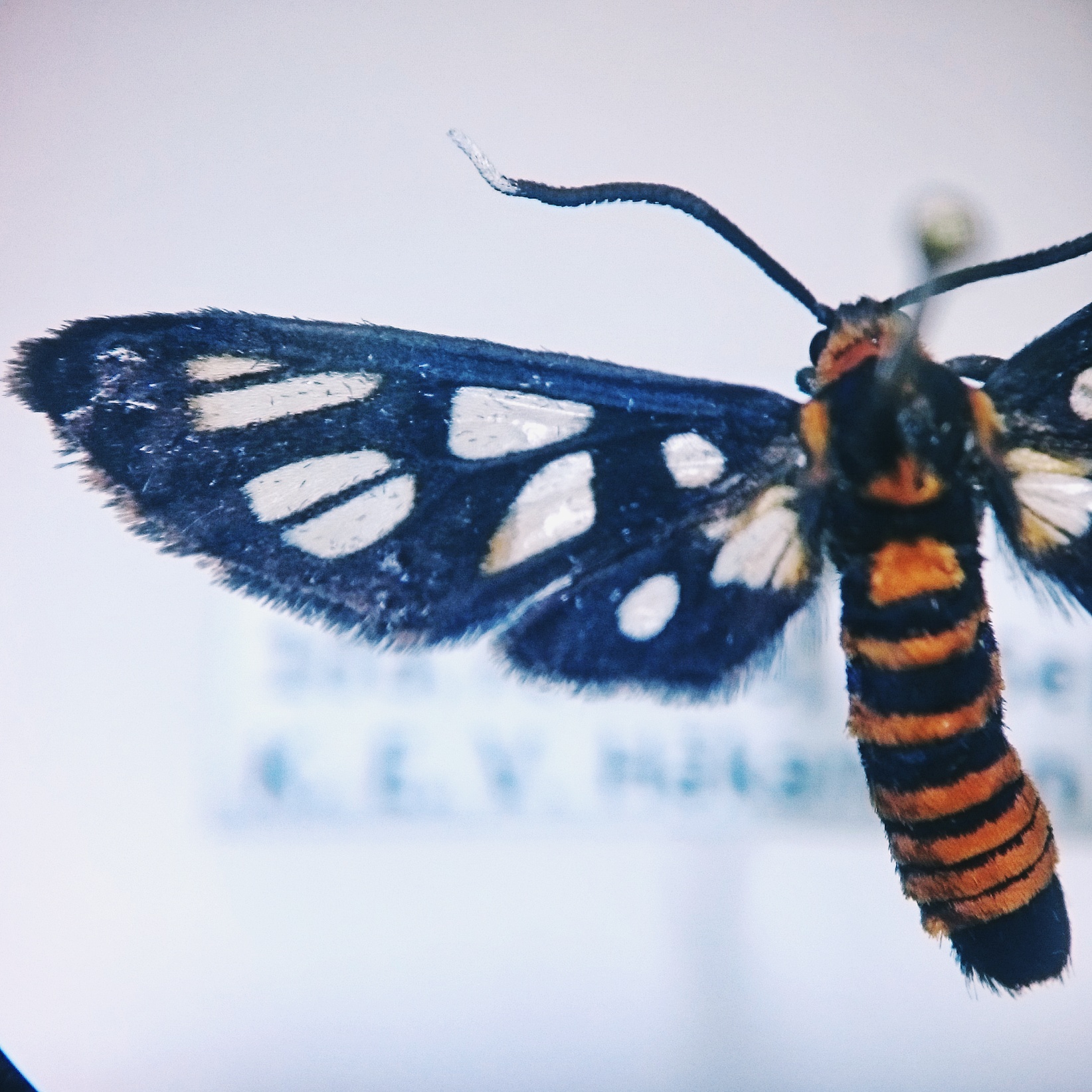 The original description was published in 1829 by Jean Baptiste Boisduval in a monograph on moths. The
description is in French and under the original species name Syntomis hubneri 14 .

In the first description Biosduval placed the species in the genus Syntomis but the genus has been changed multiple times since then, as has the species epithet. The following is a list of synonyms to the accepted name Amata huebneri (=hubneri or hübneri) 15 :

The genus Amata is a monophyletic group, best distinguished from closely related genera by having asymmetrical genitalia in both sexes 16 . Identification to species within the genera is also most reliable from characers of the genetalia. A 1966 publication by Obraztsov 17 includes a dichotomous key to species based on structure of male genitalia. Morphology of genetalia is often a good method of distinguishing cryptic species because the morphological differences are likely to cause, or in any case perpetuate, reproductive isolation. Reproductive isolation is commonly an important part of the definition of what a species is. 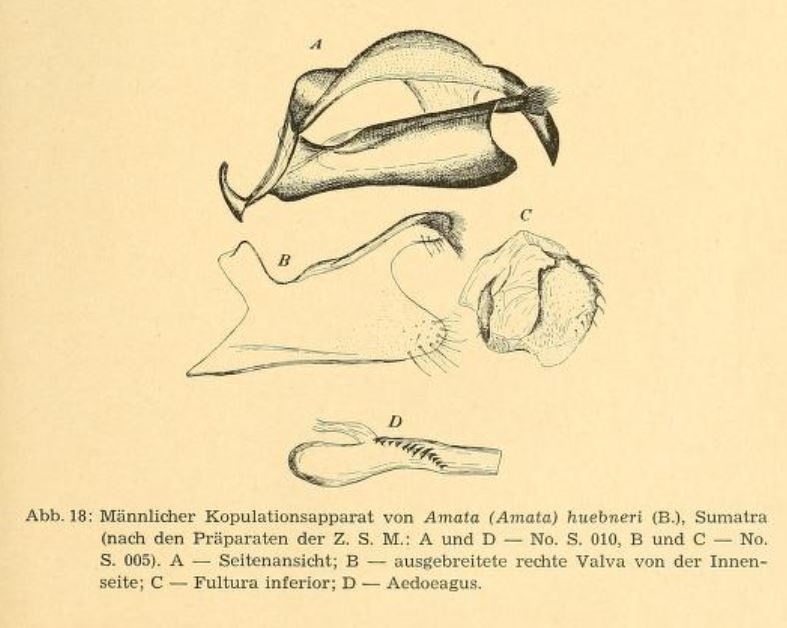 Excerpt from dichotomous key in Obraztsovs Die palaearktischen Amata-Arten 2 for determining Amata huebneri.
The subfamily containing Amata, Arctiinae, can be uniquely recogniced by the presence of a metepisternum tymbal organ (organ for creating clicking sound located on the sternum of the metathorax) and visible, dorsal pheromone glands in females8 . However, these characters are lost in some taxa 19 . Species of tribe Syntomini are distinguished from the two other tribes in Arctiinae, Lithosiini and Arctiini, by the structure of aforementioned pheromone glands as well as by the fusion of certain hind wing veins 20 .

The systematics of the tiger moths and wooly bears, Arciinae, is far from set in stone. Change has been extensive the last 20 years and relationships between Arciinae and other taxa within the superfamily Noctuidea are still uncertain 21 .

The table below summarizes some of the historical changes to the taxonomy of Arciinae. Knowledge of such changes is necessary for analysis of available literature. The book tiger moths and woolly bears from 20008 21 and the website moths of Borneo4 , for example, places Syntomini in Syntominae instead of Actinae. In addition, genus Amata has previously been placed under subfamily Ctenuchinae22 .

Historically, much misclassification of the tiger moths has been due to distantly related species being superficially similar as adults 21 . Phylogenetic reconstruction yield very different results depending on whether morphological features are used or molecular data 21 . Of course, neither method gives one true answer, resuts depend on what morphological characters are used as well as what DNA is analysed and how. Phylogenetic studies of Arctiinae are few, Syntomini is even less studies and often underrepresented 4 and studies including Syntomini sometimes lack representatives from genus Amata 7 . No phylogenetic studies include Amata huebneri, all of these factors increases the uncertainty of its placement in the phylogenetic tree.

A 2014 paper 4 constructs a tree for some large taxa in Arctiinae including Syntomini with two species of genus Amata (not A. huebneri). The study uses MAFFT alignment of nine different sequences including one mitochondrial (COI) and 8 nuclear genes. Results show strong support for genus Amata(100/1) and tribe Syntomini(100/1) using maximum likelihood and Bayesian posterior probability. However, as mentioned, the limited sample size makes the results less reliable.

Part of tree showing phylogenetic hypothesis for taxa in Actiinae with relevant likelihood estimates and taxa names highlighted. Modified from 24

Another study from 2016 22 investigating the phylogeny of the four tribes of Arctiinae including Syntomini also supports the monophyly of the taxon using maximum likelihood an Bayesian. This study uses almost the same set of genetic sequences, alignment is done using a software called MEGA 6 which supports both ClustalW and MUSCLE, the authors do not specify which is used. This study strengthens the support for Syntomini, however, it uncovers the paraphyly of other taxa 22 . The is still a long way to go. As far as I know, no studies have been done on the phylogenetic relationships on the 100+ species in genus Amata. Such studies might reveal valuable information. For example it might shed light on relatedness compared to similarity in pattern: Are the very similar species described earlier closely related or are the result of convergent evolution of wasp mimicking moths. Some of the species might prove not the be separate species at all by a phylogenetic definition of species, meaning they are genetically very similar even if observed to be reproductively isolated. But more commonly, use of the phylogenetic species concept (sensus Mishler and Theriot) leads to splitting of species. On the other hand, other species might not belong to the genus at all.