The Brahminy Kite is a bird-of-prey or raptor that can be commonly seen in a wide variety of habitats across Singapore and its offshore islands (e.g. Pulau Ubin and Coney Island).Its head, neck and chest is white while the rest of its body is chestnut-coloured.Easily recognizable by its contrasting plumage colouration, the Brahminy Kite is nothing short of a spectacular sight in our skies! Read on to find out more about this bird!

-The Brahminy Kite is considered to be a sacred bird in India as it is seen as a representation of Garuda ("King of Birds"), the mount of the Hindu Lord Vishnu.

-The Malaysian island, Langkawi, is said to have been named after the Brahminy Kite, with the name Langkawi originating from the old Malay words "helang" which means eagle and "kawi" which refers to a type of red-coloured stone, hence drawing reference to the chestnut plumage colouration of the bird. 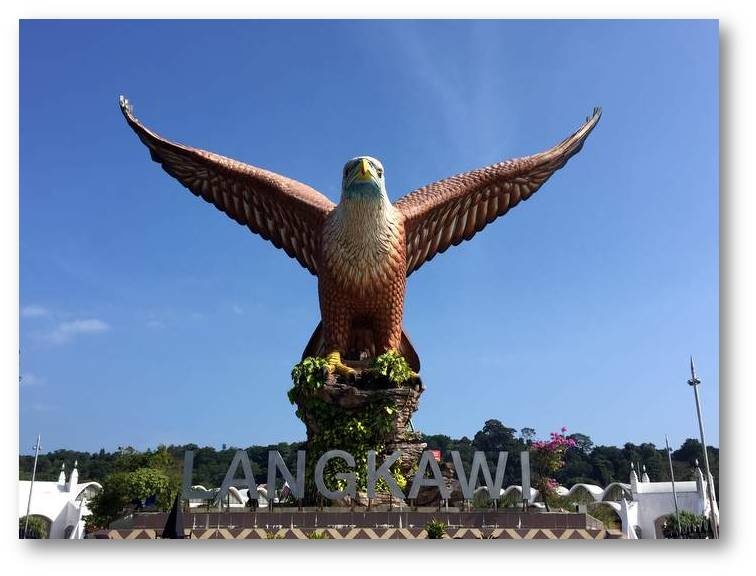 Statue of the Brahminy Kite at the Eagle's Square in Langkawi, Malaysia. Photo by: Janis [Permission pending]. Accessible at: http://www.travelingwiththejones.com/2014/12/28/12-fun-facts-about-langkawi-malaysia/.

-The Brahminy Kite has been adopted as the official mascot of Jakarta as a sign of the Indonesian government's commitment towards protecting its native wildlife.

The Brahminy Kite is a medium-sized raptor,

ranging from 45-51cm in length. It has a white head, neck and chest and a characteristic chestnut-coloured body. The contrasting plumage colouration of this bird is one feature that many birders typically use to recognize it from afar. On closer inspection, one can find that it has fine streaks that run down its crown, nape, throat, chest and upper belly.

It has a strongly hooked beak which can be yellow, grey or white in colour,

and yellow feet with sharp, curved talons or claws. 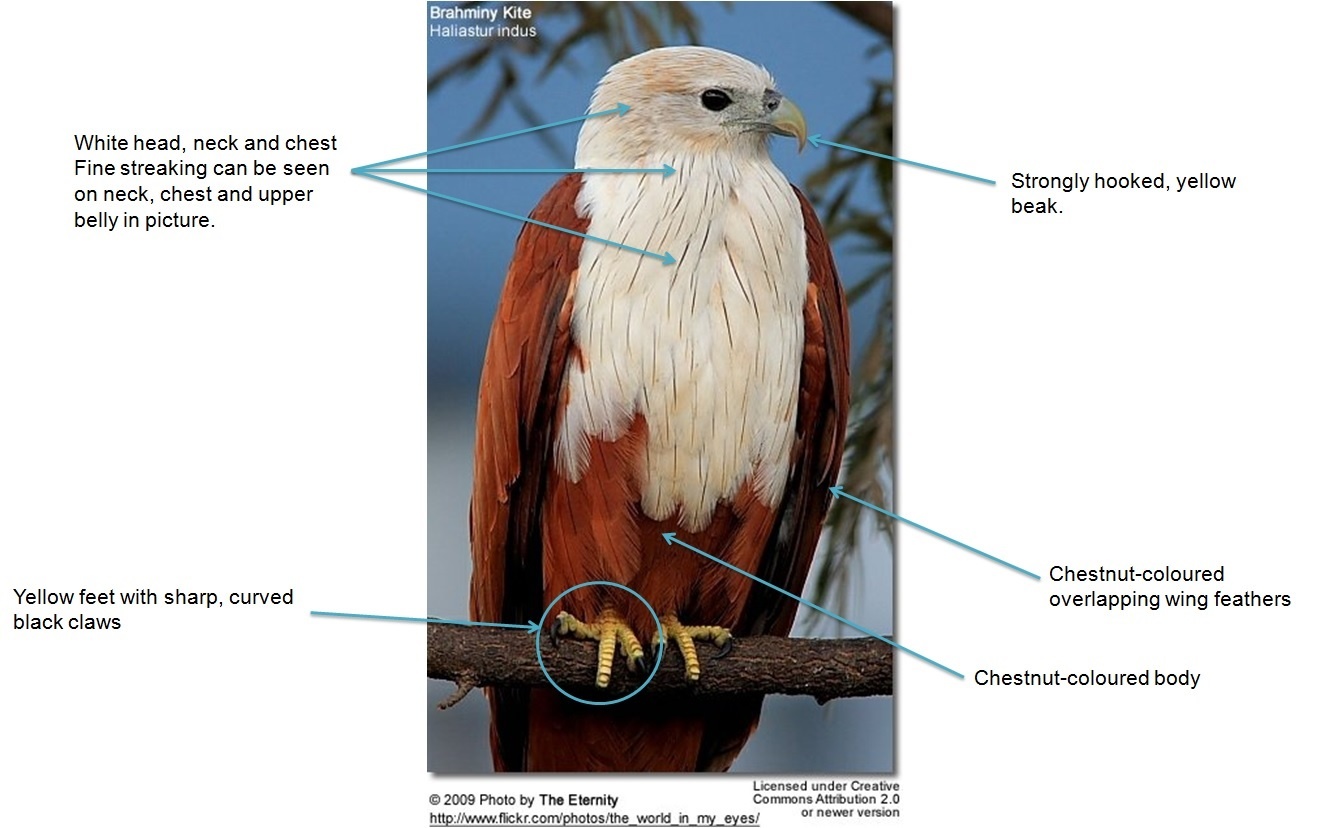 The upper-wing feathers of the adult Brahminy Kite are chestnut-coloured, with characteristic black wing tips that spread out in a finger-like manner when it flies.

Its under-wing coverts are also chestnut-coloured; its under-wing and tail flight feathers are however paler brown in colour.

The tail of this bird is relatively short and its tail base appears to be slightly rounded when it is in flight.

(For a diagrammatic illustration of the flight feathers of a bird's wing, see here.)

The juvenile Brahminy Kite differs from the adult mainly in its plumage colouration; the juvenile has an overall brown plumage, which is lighter at its head and undersides and darker on its upperparts.

It also has fine streaks which are paler in colour than the adults that occurs along the crown of its head, nape and its undersides. In addition, the juvenile has a black beak.

The male and female Brahminy Kites are identical in appearance, but the females can be 3-7% larger than the males.

This phenomenon of reversed sexual size dimorphism is typically seen in birds-of-prey, where the females tend to be larger and heavier than the males. A larger body size in female raptors is likely to enable them to be more successful in securing a territory, breeding and in rearing their young.

The black kite (Milvus migrans) is not native to Singapore; it is however known to visit the country to escape the winter season in its native ranges.

Indeed, the form of their tails is what separates Kites from the genus Haliastur (e.g. Brahminy Kite) and Milvus (e.g. the Black Kite).

The white-bellied sea eagle (Haliaeetus leucogaster) is a resident bird species of Singapore. The juvenile of this bird species can also sometimes be mistaken for a juvenile Brahminy Kite,

especially since both bird species occupy similar habitats and have slightly overlapping diets and behaviour.

Distinguishing features that enable birders to tell the juveniles of these two bird species apart have been depicted in the comparison chart below.

The Brahminy Kite has a distinctive call that sounds like a cat mewing or an infant crying. Its call consists of a nasal 'Ngeehhh' sound.

Have a listen to the vocalization of the Brahminy Kite through the embedded Xeno Canto audio link below!

Brahminy Kites are usually spotter in coastal areas, mangroves and estuaries. They can also be found inland, soaring over forests where they sometimes stop over for a drink at forest streams, rice fields, marshes and even rivers.

In Singapore, they can be found in a wide variety of habitats including secondary forests, scrubs, mangroves, old plantations and they have even made appearances in urban areas,

suggesting that they are tolerant of human presence.

They can also be found on the offshore islands of Singapore like Pulau Ubin and Coney Island.

(For recorded sightings of Brahminy Kites in Singapore, see here.)

1. The Brahminy Kite is said to be an opportunistic scavenger.

It feeds on carrion like stranded fish and even crabs.

The Brahminy Kite has been observed to take advantage of fish-traps set up by fishermen in order to capture stranded fish.

It is also known to scavenge food from other sources like food wastes and garbage released from boats or at dumping grounds.

2. In addition, the Brahminy Kite has also been reported to steal fish from aquatic birds, like shorebirds, a phenomenon known as kleptoparasitism.

3. It also hunts for live prey by employing a variety of hunting techniques. It searches for prey when gliding in the sky or when perched and subsequently, swoops down to seize its prey.

The Brahminy Kite is able to capture its live aquatic prey from below the surface of the water with its talons, without actually diving into the water!

It subsequently brings its catch back to its perching site to feed or simply consumes them on the ground.

Probably most interesting about the Brahminy Kite's feeding strategy is that it is capable of aerial feeding, whereby it catches and feed on small prey like insects while in flight.

The Brahminy Kite has even been recorded to feed on larger prey like fishes while in flight!

A test of the foraging skills of the Brahminy Kite and Black Kite. Notice their ability to capture prey from the water surface with their talons.

The breeding season of Brahminy Kites varies in different parts of the world.

They tend to construct their nests in trees that are within close proximity to water bodies like rivers or within agricultural areas.

In Singapore, they have been found to nest in Casuarina trees near coasts and reservoirs. 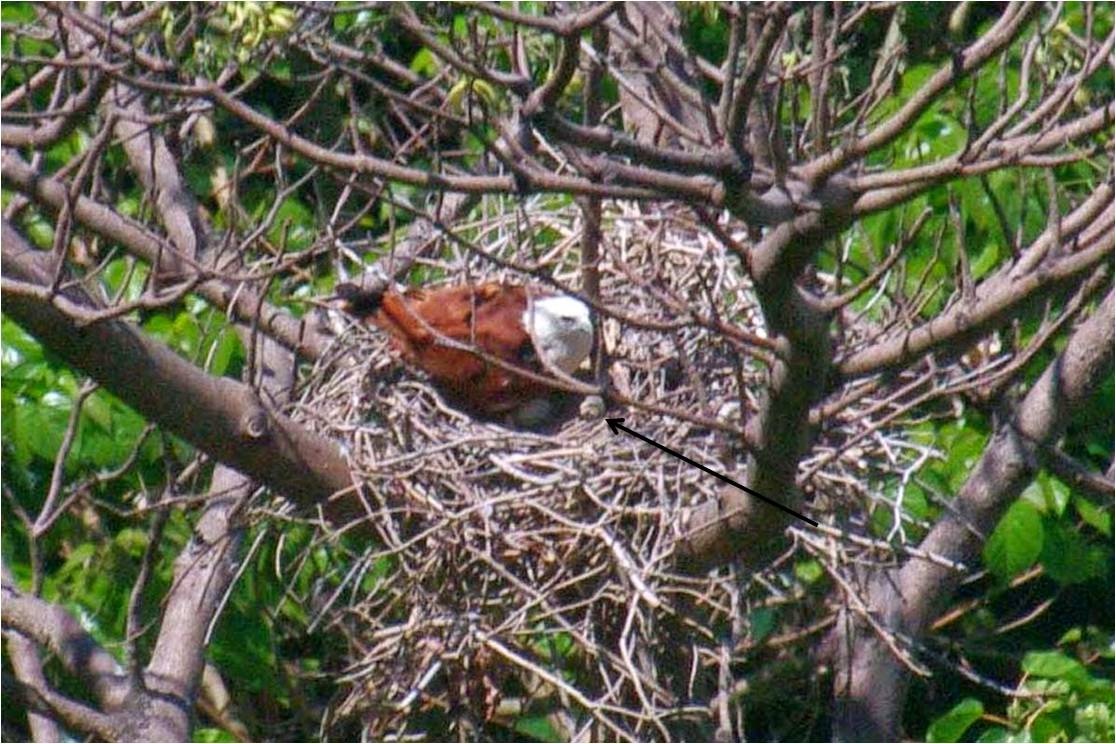 The incubation period typically lasts for a duration of 26-28 days.

During this period, both the male and female play a role in incubating the eggs; they take turns to incubate the eggs.

The nestling period lasts for a duration of approximately 43-45 days.

The male Brahminy Kites play an important role during this stage; they deliver most of the prey items for the female and the nestlings during the early stages of the nestling period.

Further into the nestling period, the young Brahminy Kites grow and start to be able to thermoregulate. During this phase, adult females will reduce their brooding of the young nestlings. As the nestlings gradually develop feeding capabilities, the adult females spend increasingly less time in the nest and only feed the young occasionally. 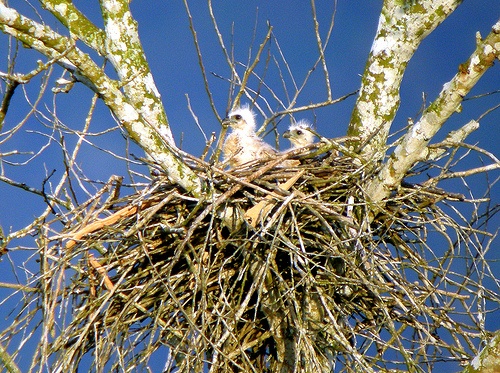 Although the ecological roles of the Brahminy Kite have not been directly studied, being primarily a scavenger, the Brahminy Kite plays an important role in keeping the environment clean by removing carrion like stranded fish or crabs. Huijbers et al (2013) found that the urbanisation of sandy beaches has modified scavenger guilds, therefore becoming less favourable feeding sites for scavenging raptors like Brahminy Kites.

— yet another adverse effect of human modification of coastal habitats!

The Brahminy Kites have a very wide natural geographic range that extends from India to Southern China, through the coastal sites of Southeast Asia, and down to Australia, where it can be found along the coastline, stretching from Western Australia to Northern Australia (where it is more commonly found) right down to New South Wales. 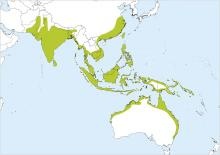 Global distribution of Brahminy Kite. Map adapted from: HBW and BirdLife International Illustrated Checklist of the Birds of the World [Permission pending]. 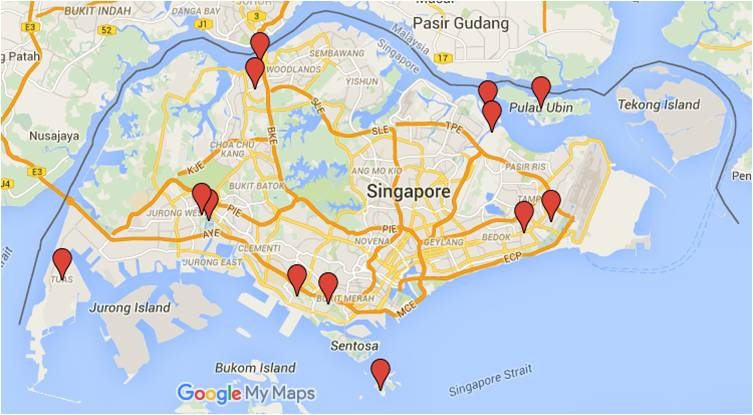 Google Maps showing local distribution of Brahminy Kite. Compiled based on recorded sightings of the Brahminy Kite in Singapore.

Owing to its very large geographic range and large population size, the Brahminy Kite has been assigned to the Least Concern category in the IUCN Red List of Threatened Species.

Brahminy Kites are being driven to local extinction due to habitat loss (as a result of land-use conversion), hunting, pesticide over-use in the 1960s and a decrease in availability of wastes which the kites can potentially feed on due to increased hygiene standards.

Based on the DNA sequences of the large nuclear RAG-1 exon, the phylogenetic relationships of birds in the family Accipitridae was recently re-evaluated.

Through the DNA-based phylogenetic analysis, it was found that the genus Haliastur to which the Brahminy Kite belongs is a closely related sister group of the genus Milvus, which has also been previously indicated by studies that analysed phylogenetic relationships based on morphological characteristics.

Both of these groups are in turn closely related to the genus of sea eagles, Haliaeetus. 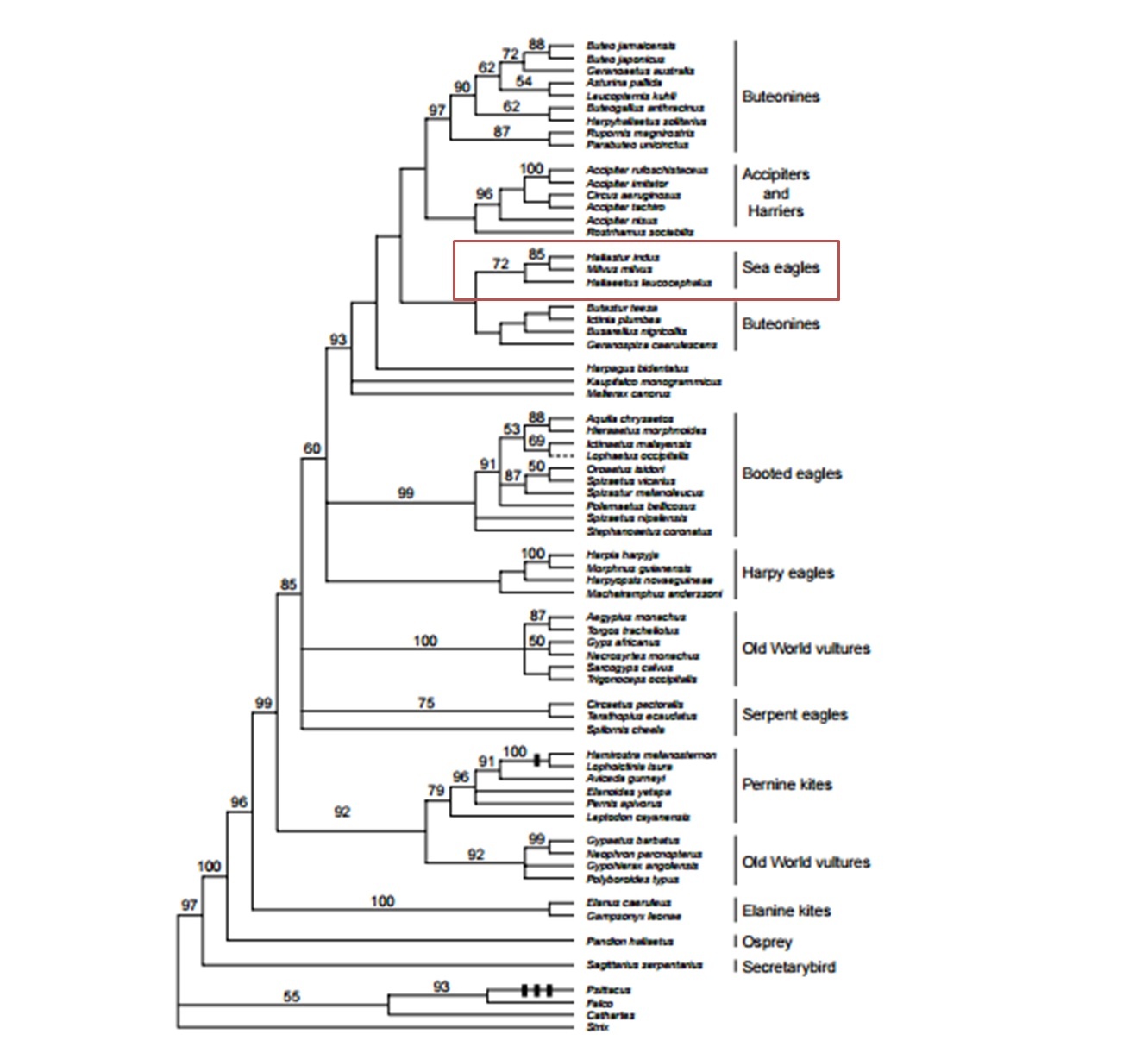 Maximum parsimony tree based on RAG-1 DNA sequences. Group within which the Milvine kites (Kites belonging to the genus Haliastur and Milvus and Sea eagles) fall under is highlighted in red box. Adapted from: Phylogeny, diversity, and classification of the Accipitridae based on DNA sequences of the RAG-1 exon. Journal of Avian Biology, 38(5), 587-602. Maximum likelihood tree based on RAG-1 DNA sequences. Group within which the Milvine kites (Kites belonging to the genus Haliastur and Milvus and Sea eagles) fall under is highlighted in red box. Adapted from: Phylogeny, diversity, and classification of the Accipitridae based on DNA sequences of the RAG-1 exon. Journal of Avian Biology, 38(5), 587-602.

This page was authored by Gayathiri