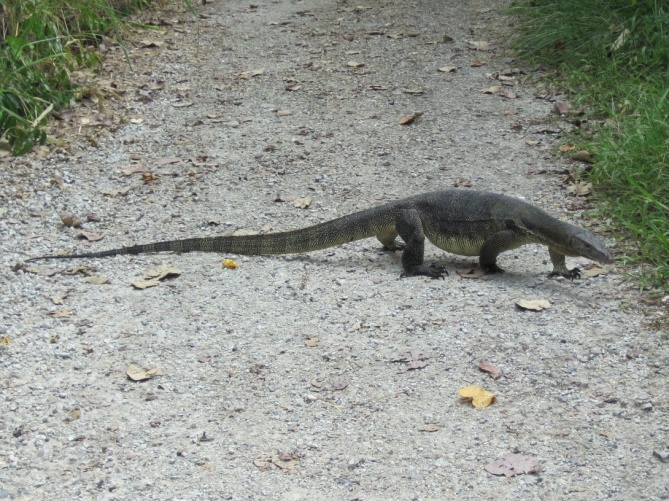 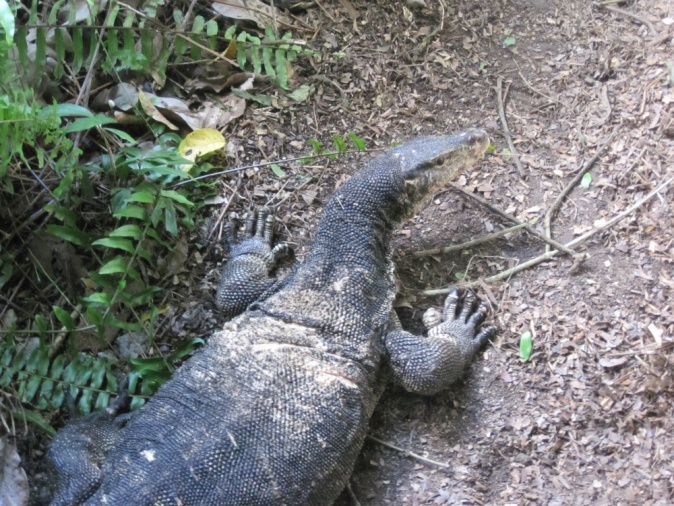 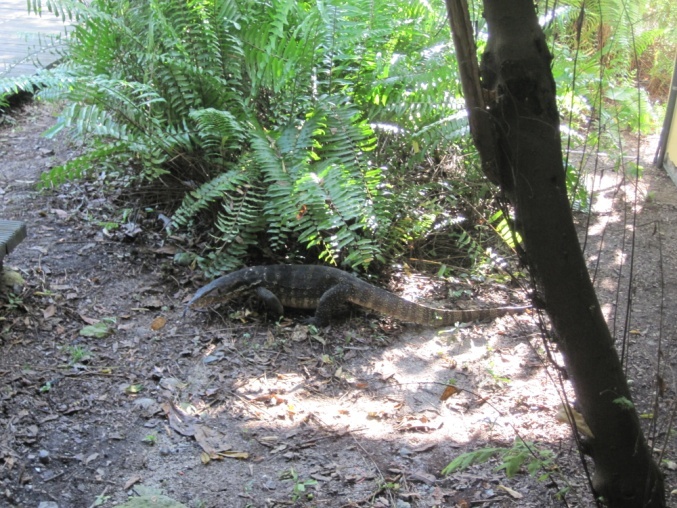 Water Monitors are among the largest lizards in the world with a wide distribution. Varanus salvator are a common sight in Singapore (subspecies macromaculatus) and across other parts of South and South-east Asia. Their coloration range from brown to black with orange, yellow or white spots or ocelli. Their heads are ventrally flattened with an elongated snout. Their tails are long and powerful and are used for swimming, fighting or hunting.

Varanussalvatorare typically found near freshwater or marine water sources and have a very wide distribution ranging from Sri Lanka in the north-west to Philippines in the north-east, all the way down to Java in the south. There are currently four recognized subspecies (2011), and the distributions of the different subspecies do not overlap.

They live in tropical evergreen rainforests and sometimes in subtropical forests, but never stray too far from a water source. They are classified as semi-aquatic, spending significant time on land or in water, although they are occasional arboreal (climb trees), particularly to escape predators.

, however, in view of the great variation within the species (see the different sections for each of the subspecies), the key is only useful for deriving the identity of V.s. salvator.

Scales
Scales on the head are large, flat and sooth with four to eight well-differentiated supraoculars (enlarged scales on the crown immediately above the eye) and 48 to 60 scales positioned in a straight line from rictus to rictus (gape) above the head.

Vision
Their visual field is approximately 240° and consists of monocular as well as a small range of binocular vision (which allows for depth perception). The eye is covered by two eyelids, one which remains open when the animal is swimming.

Smell
They have a highly developed sense of smell that helps them acquire prey with the Jacobson’s organ, as well as keep track of fellow individuals in the area by the means of the vemeronasal organ.

Hearing
It is believed that the primary function of the ears in lizards is for maintaining balance.

Being ectotherms (“cold-blooded” creatures), Water Monitors have a low basal metabolic rate and rely heavily on anaerobic respiration for their energetic needs, which is suitable because aerobic respiration is not optimal at low temperatures. Having a low metabolic rate also means that their energetic requirements are lower as they do not have to spend energy on maintaining a constant body temperature as in homeotherms (“warm-blooded” creatures). Their heartbeat rates are proportional to their body temperature and increase with increased body temperature.

Monitor lizard hearts have efficient blood buffering activity and high blood acidity tolerance to deal with the fluctuation in pH levels due to the high dependence on anaerobic respiration for their energetic needs. A positive feedback exists to increase breathing rate to remove excess carbon dioxide and increase pH levels when blood acidity is high.

Due to the animal’s ability to respire anaerobically (without oxygen)for long periods of time, they are able to spend relatively long periods of time underwater, which allows them to escape from predators or to catch prey.
Varanids have scales and no sweat glands and so reduce body temperature by water loss through the eyes and mouth. In warmer climates, they may even enter the water to cool off.

Being cold-blooded (ectotherms), Monitor lizards spend a good deal of their time basking in the sun. They are also known to spend some time on trees although they lack specialized climbing structures. Juveniles spend a lot of their time in tree hollows as cannibalism is common in Water Monitors and they are vulnerable while young.

Male have internal testes and a hemipenis. Females have a cloaca through which reproduction and excretion of bodily wastes occur. Clutch size is typically related to female body size, and in V. salvator, the egg mass produced is approximately 23% of the female’s body mass.

Least concern, although it is heavily exploited in the leather trade

Introduction to the more technical sections of this article

Below, additional information regarding the specie’s taxonomic status and more detailed information is discussed.

Taxonomy is a branch of science that deals with the organizing and naming of plants and animals, as well as the process of it. This system of classifying plants and animals was introduced by Carolus Linnaeus. All species that are formally recognized have been “described” by a person or a few people. For a description of a species to be valid, it must have a unique name including genus name and species epithet, a written description as well as what is known as a “type”. This type may be the specimen used to describe the species, or may be bones, fossils, drawings or photographs. It must be something that can be used to compare with and identify if another specimen is similar to it or not.

Also highly discussed in this article is the issue of subspecies. A species is the smallest recognized taxonomic unit. There are several competing theories on what defines a species, but while this is clearly a problem, I shall not discuss the issues in this article due to space issues). The most popular theory is that of reproductive isolation, and this is the theory most commonly taught in schools. According to this definition, species are groups of organisms that are able to interbreed to produce viable (fertile) young. Subspecies are members of the same species that are able to interbreed, but appear different. Subspecies differ more than races, but less than different species.

According to morphological, chromosomal morphology, MCF tests and sequencing data, the phylogenetic relationship of V. salvator against other varanids is as follows

:
As seen from Fig 5, Varanus salvator is mostly closely related to Varanus dumerilli and Varanus bengalensis. Although is this the most recent paper presenting the phylogeny of Varanids, this paper was published in 1998. The phylogenetic position is based on a specimen from V. s. macromaculatus; locality Indo-Malaysia. Since then, many species have been elevated to the species level from the V. salvator complex. It is likely that in view of these changes, several species were excluded as they were previously considered under the V. salvator complex. 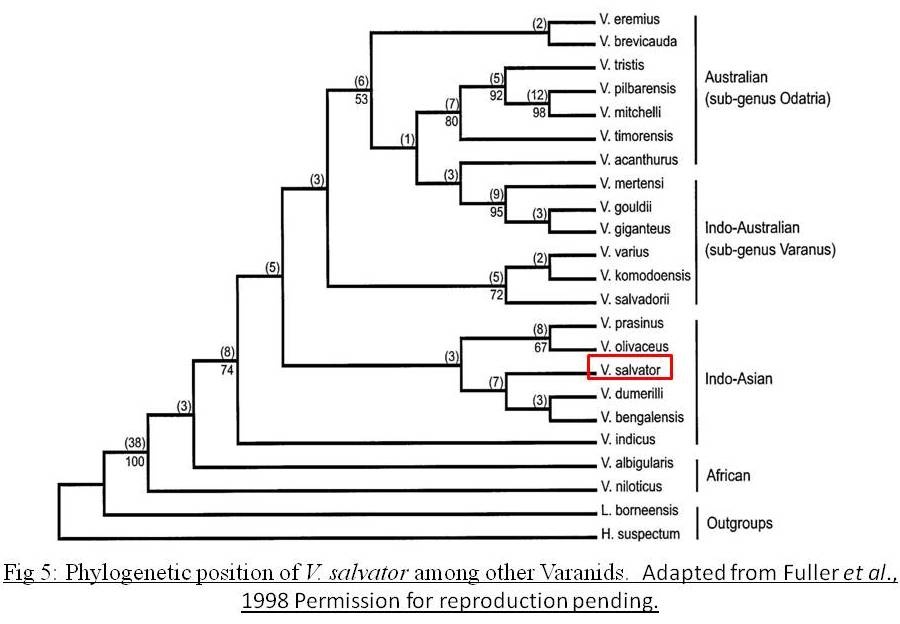 Neotype: ZFMK 22092, juvenile, collected by B. Schulz, March 1978, donated by B. Schulz, April 1978.
Holotype: IM 2176, juvenile [andamanensis]
Lectotype: RMNH 3179 [celebensis, designated by De Lisle 2009] The type belongs to the subspecies Varanus salvator salvator, which is a subspecies endemic to Sri Lanka. The type species was described by Laurenti in 1768 in Sri Lanka

Although common, many aspects about the species have not been resolved due to their phylogeny. The consequences are such that due to longstanding confusion, some of the information in the past (particularly before 2007) filed under this species name actually belong to taxa that are not included under Varanus salvator.
It is said that Varanus salvator is a species complex which comprises of several cryptic species. In previous years, several subspecies have been upgraded to the species level, and much work is still under way to resolve the confusion about its phylogeny.
Although the Water Monitor has been described well over two hundred years ago and their presence greatly felt, the taxonomic status of the species is very uncertain. Upon close inspection it appears that Varanus salvator may actually be a species complex. In the past, may sub-species have been described, which have subsequently been elevated to a species, or species relegated to Varanus salvator. Indeed, numerous shuffling was and is still occurring with regards to the various members of the Varanus genus, which explains the high number of synonyms this species has. Even the statuses of the subspecies are unresolved and have been renamed and regrouped multiple times in the past as well as in the present. All this confusion is amid analyses and comparisons of morphology, biochemistry and even molecular methods

. In view of the species complex and potential future changes in its taxonomic status, where it is possible to narrow down the research subjects to subspecies level, I have presented the information in the appropriate section.

The different subspecies may be recognized and distinguished from each other by the following characteristics:

This page was authored by Wong Li Jing