. While much is known about the biology of this species in Sabah and Brunei, little is known about the populations in Singapore, where small and fragmented forest habitats may have an impact on the viability and behaviour of this majestic giant ant of the forest. 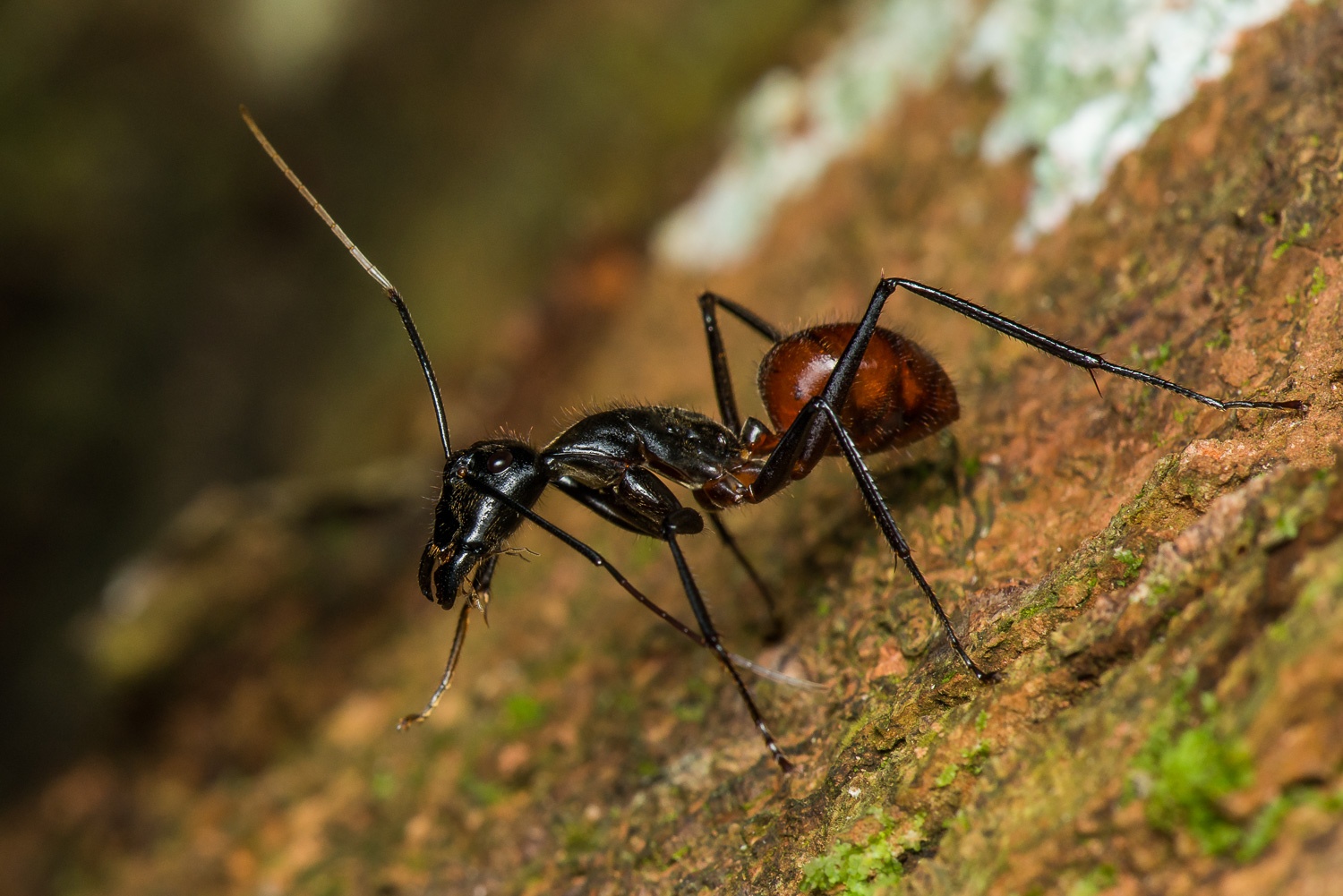 as recognised latin names for the giant forest ant.

The giant forest ant is a common inhabitant of the rainforest in Southeast Asia from Thailand, Sumatra, Borneo, Malaysia to Singapore, with one recognized subspecies, Dinomyrmex gigas boreensis found in South Borneo 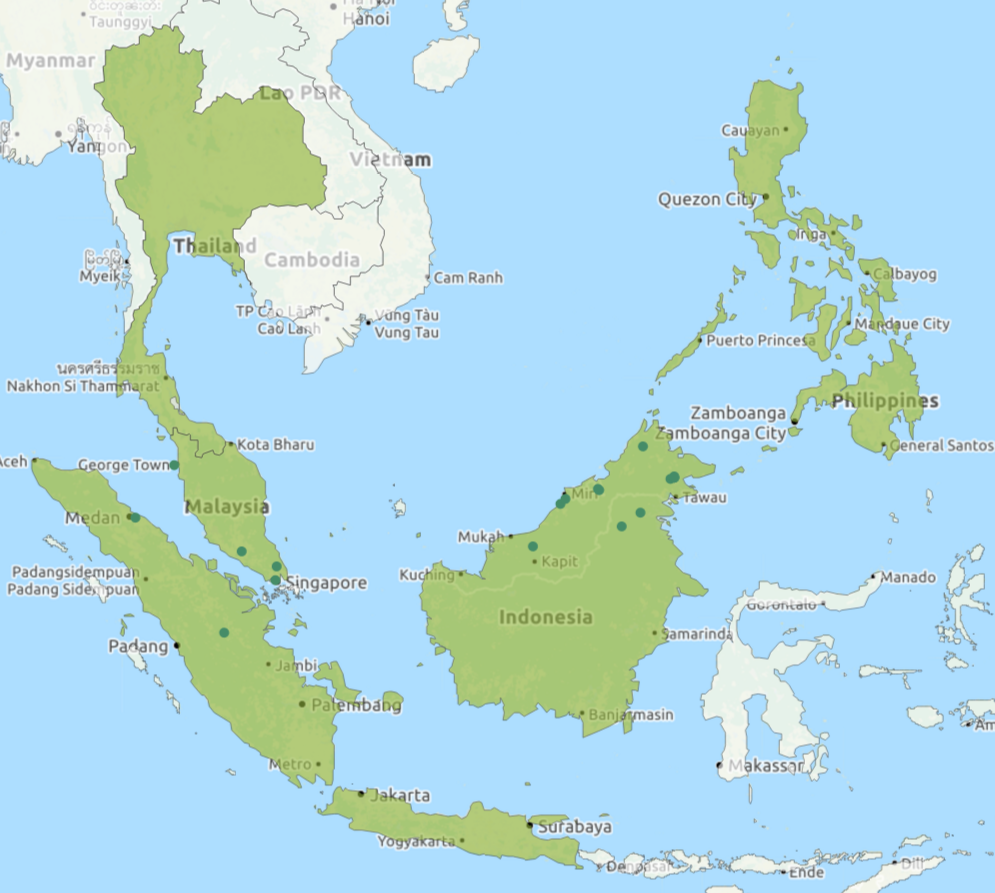 Figure 3. Map showing distribution of Dinomyrmex gigas retrieved from antmaps.org (pending permission). Note that the giant forest ant is not found in Philippines (Christian Peeters, pers comm.) The green dots on the map represent physical specimens that have been collected at that location. Click on image to see an interactive version of map with GPS coordinates.

How to identify the Giant Forest Ant in Singapore 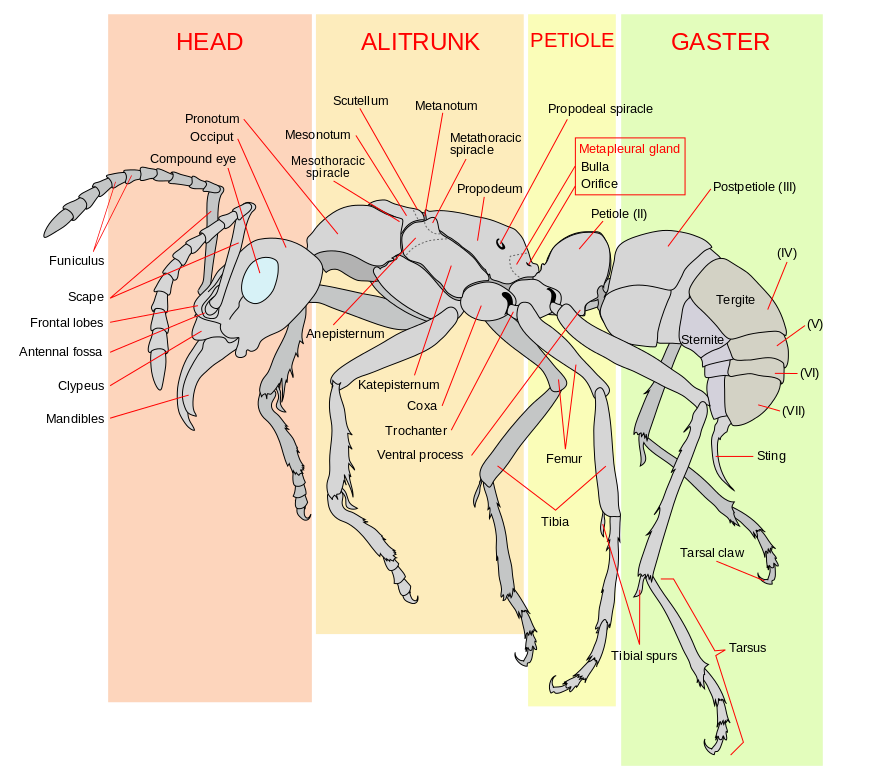 The following combination of features are used to identify the giant forest ant, Dinomyrmex gigas

The major worker is a sterile female whose primary role is to defend the nest and protect foragers. Notice the large heart shaped head of the major and the large mandibles with sharp mandibular teeth! The major workers also possess a single reduced ocellus on the top of its head, its function however is still a mystery but suggests a distinct development pattern from minor worker (Christian Peeters, pers comm.). These ants are also rarely involved in foraging

The giant forest ant has a moderately sized colony compared to other ant species, however its large size allows it to forage over a much greater area. The best studied colony in Sabah had a population of about 7000 workers with a foraging range of 0.8 hectares. Numerous studies concluded the giant forest ants to have polydomous colonies, with workers of each colony distributed unevenly among numerous nests

Ants are exogamous and invest a lot of energy into reproduction, therefore it is essential that mating flights match their neighbouring colonies to prevent energetic waste. Many different cues can be used to synchronize the mating flights of different ant colonies of the same species. These cues are called zeitgeber and include, temperature, humidity, global radiation and the development of a brood which is intricately linked to the seasonality in temperate zones. However, in the tropics which are mostly aseasonal and development of brood is not limited by temperature other cues have to be sought. The giant forest ant follows a circa-semiannual nuptial flight pattern where the time between each nuptial flight was observed to be 188 ± 5 days. This suggests a strong endogenous or ‘internal clock’ component involved in the reproductive cycle of the giant forest ant

Notes on tagging of workers

Marking of ants was often use to observe and collect data about all aspects of the biology of the ant from ant foraging behaviour to movement between nests. Such marking was done on the thorax and/or abdomen of the ant using either durable numbered plastic tags 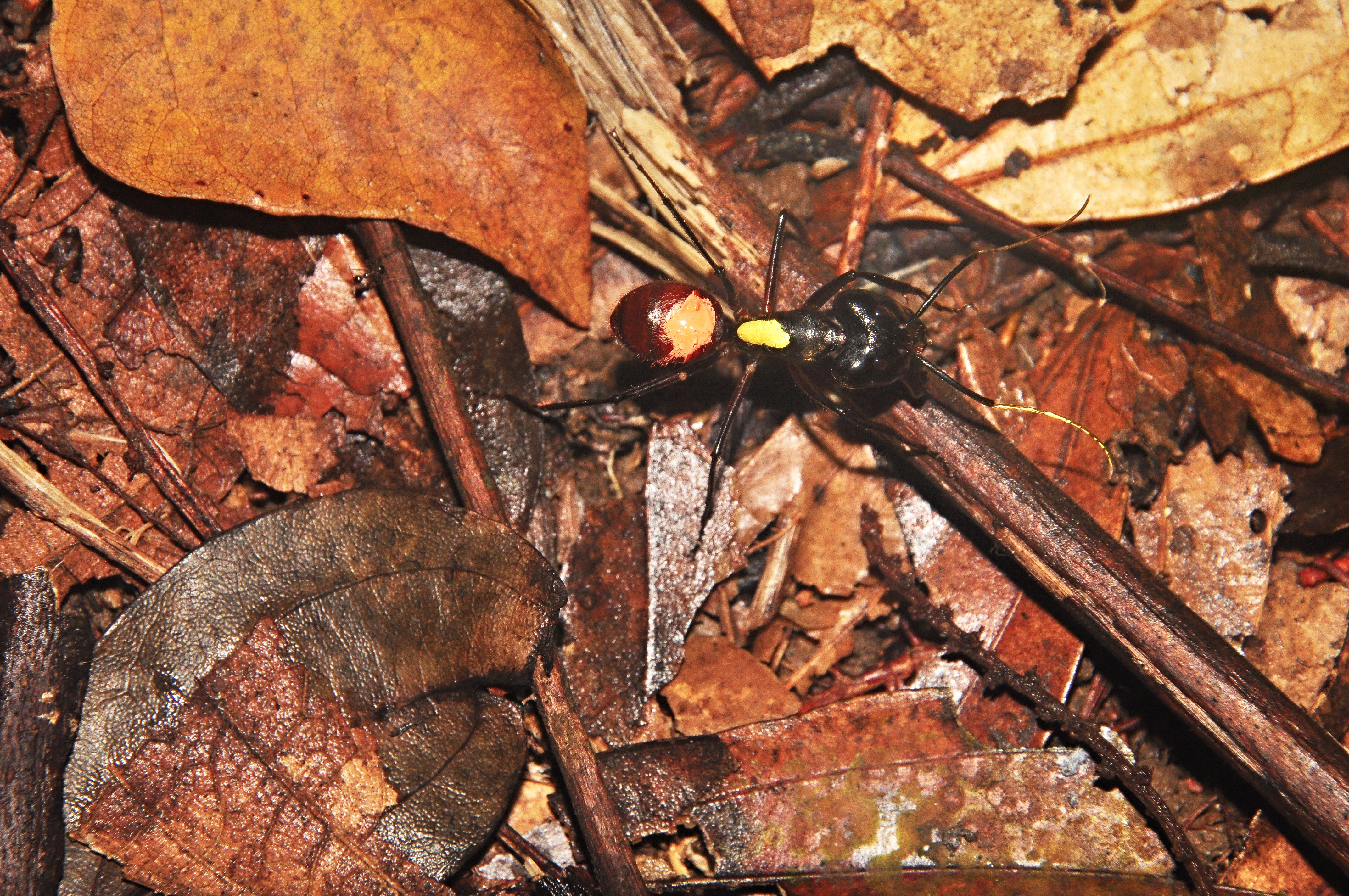 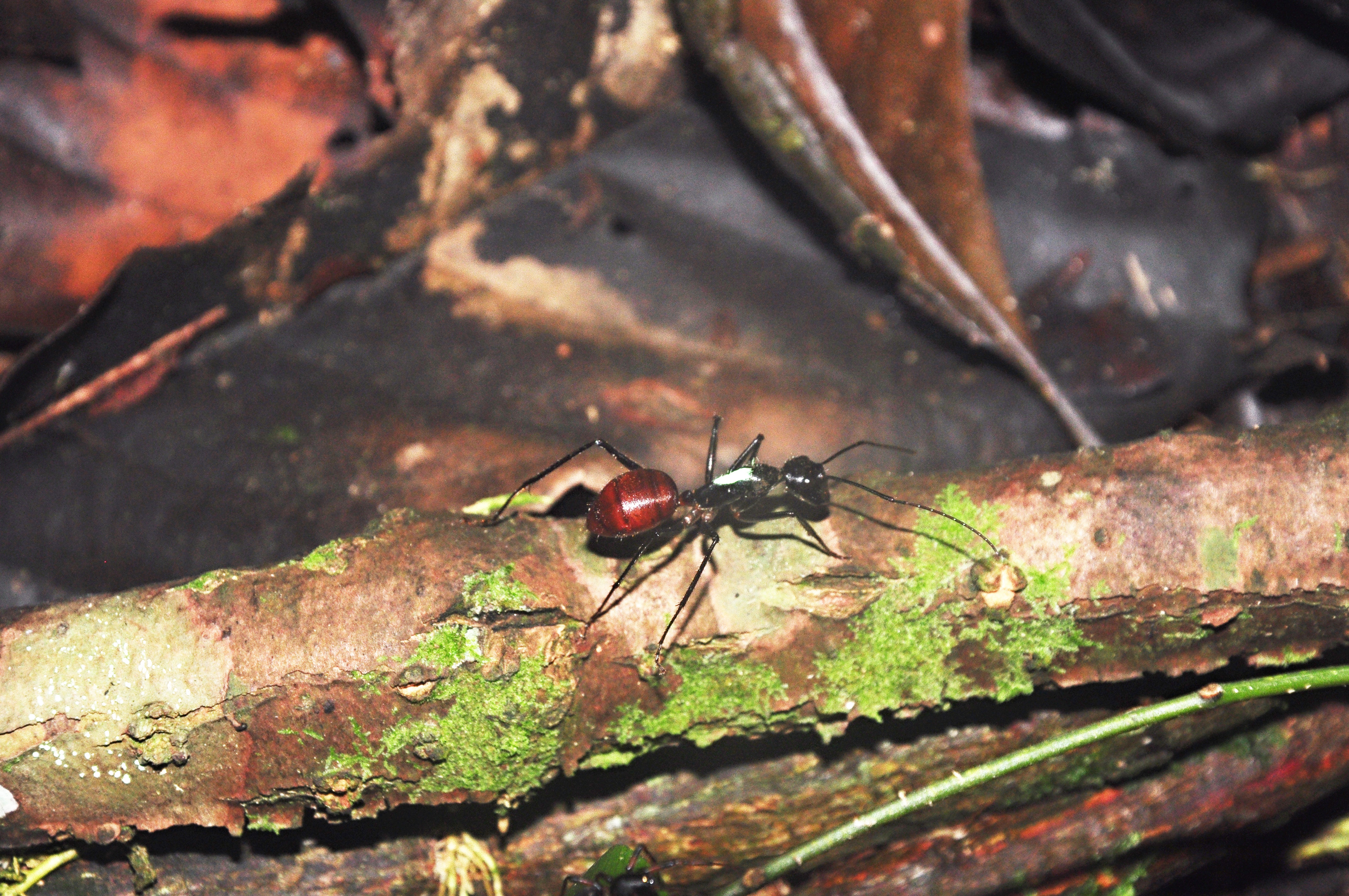 While not much is known of the distribution of Dinomyrmex gigas in Singapore, it is known to inhabit only good quality forests which are diminishing in numbers. The large territory that each colony occupies coupled with reducing forest patch sizes and fragmentation could spell trouble for the viability of this species in Singapore. The map below details the current known distribution of Dinomyrmex gigas in Singapore using data obtained from collected specimens. Anyone with a sighting of the giant forest ant is invited to comment on this page with a picture of the ant, locality and date to update the map!

Figure 22. Google MyMaps showing the known locations where Dinomyrmex gigas has been collected or sighted in Singapore.

Disclaimer: The next section maybe technically challenging to the layman reader but one is encouraged to read on to gain more information on the science of naming and delimiting species!

Dinomyrmex gigas is part of the subfamily Formicinae, which is a large group with about 3030 described species. It is a successful group with a global distribution across a wide range of different terrestrial environments 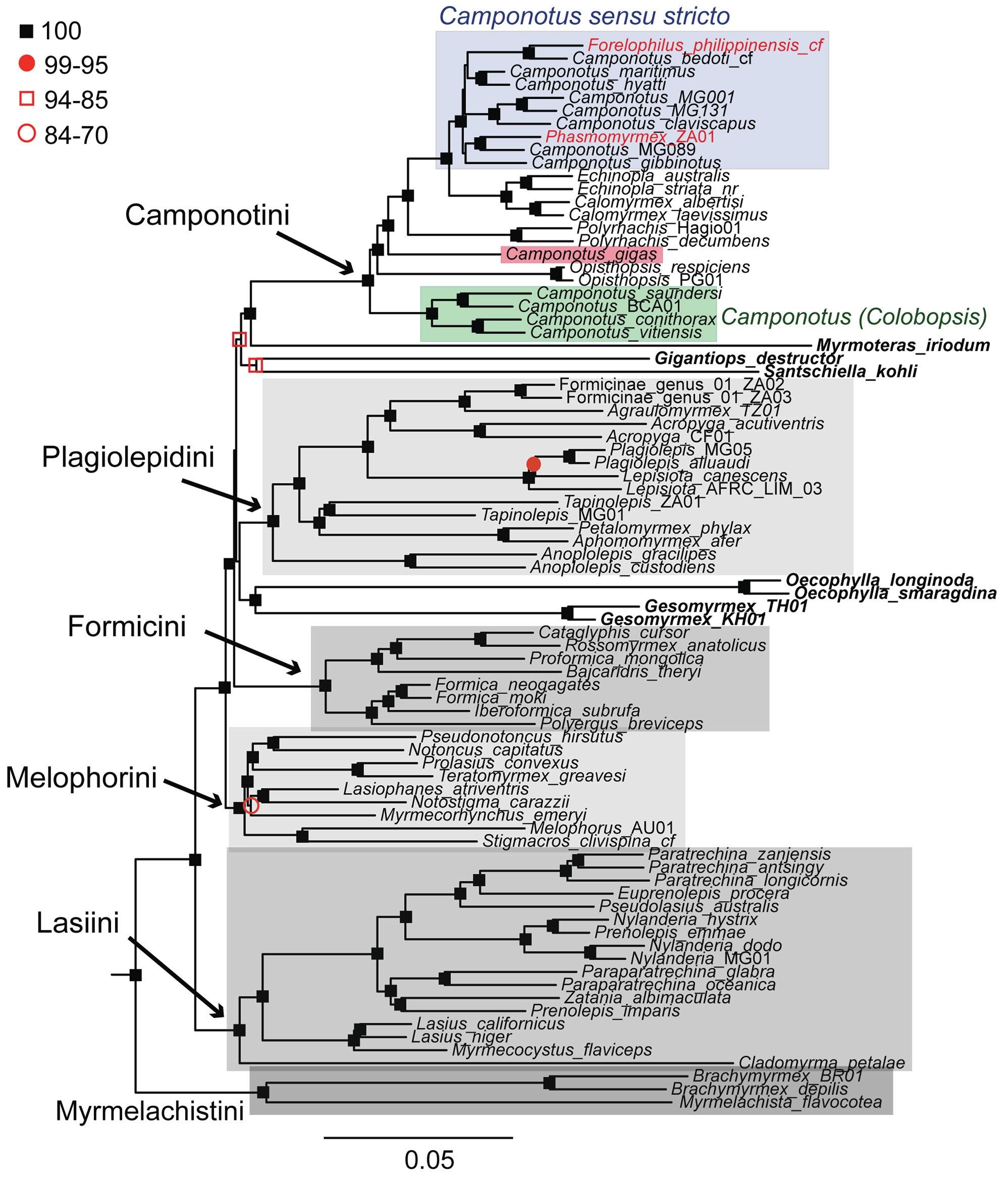 Figure 23. Phylogeny of the subfamily Formicinae based on phylogenomic analysis. Legend for maximum likelihood bootstrap support values shown on top left hand corner of the picture. Camponotus gigas as it was previously known is found in the tribe Camponotini and can be seen to have a different lineage (100 bootstrap node support) compared to Camponotus sensu stricto, leading to the resurrection of the subgenus Dinomyrmex to genus and the new combination Dinomyrmex gigas as the recognized name for the giant forest ant. Figure from Ward et al., 2016 (Fair use)