To the untrained eye, the pigeon fly may look like any other ordinary fly... However, as you will discover, there is more to this fly than meets the eye!

Pigeon Fly or Pseudolynchia canariensis (Macquart, 1839) is a biting fly in the family Hippoboscidae. The Pigeon Fly mainly parasitizes birds from the family Columbidae, such as pigeons and doves, thus its common name. However, it has been recorded on other birds. The pigeon fly is remarkable for its life bearing methods, parasitism, and phoresy which will be further elaborated in the sections below!

Unlike most flies, pigeon flies “give birth” to their offspring instead of laying eggs. A mother fly "gives birth" to only one offspring maggot at a time. A single egg will hatch inside the fly’s uterus and feed on the secretions from the “milk glands” within the abdomen of the mother. After the 3rd larval instar stage and when the larvae has reached its maximum size, it forms a prepupa or a puparium. The mother will then “give birth” to it. Shortly after leaving the mother’s body, the prepupa will harden to form a brown puparium. The puparium are generally found around bird's roosting sites or even on the birds themselves. Finally, it will undergo complete metamorphosis and emerge as a young adult 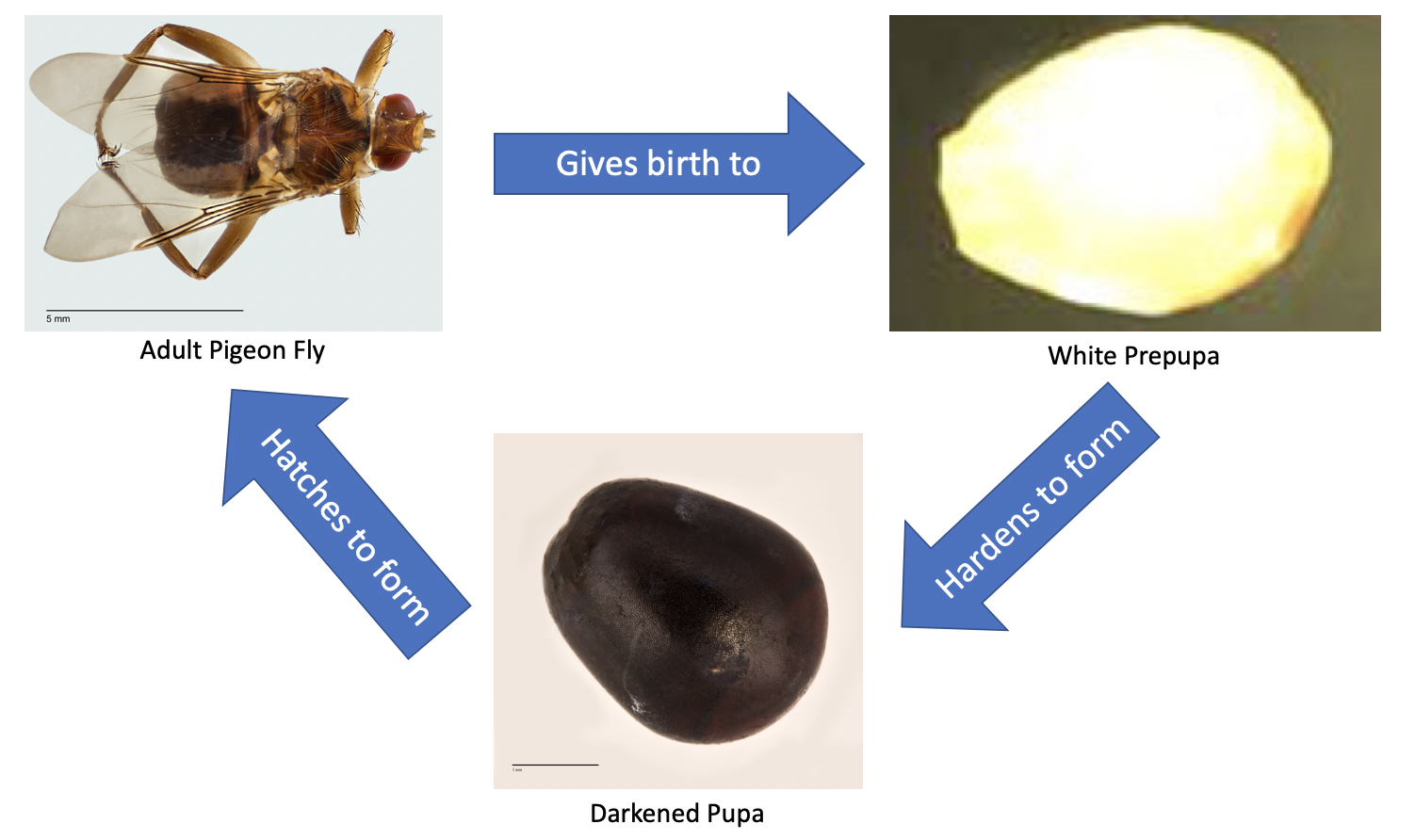 Figure 4: White prepupa (Mature 3rd larval instar which has stopped feeding and immediately begins to form a puparium when it is delivered by the mother), brown pupa and an adult pigeon fly. Image Credits: Karen Wheeler, University of Florida.(Pending Permission)

The mother pigeon fly has to provide nutrients for her young until it emerges from the mother's body. Moreover, the prepupa would have to be of a similar mass to the mother itself, otherwise the young would get smaller with each generation. Imagine giving birth to a baby the same size as you! These flies would go through that 10 to 20 times throughout their lives. This shows the mother's commitment to passing her genes on to the next generation, no matter how tough it may be.

The pigeon fly's main host is the pigeons and doves from the Order Columbiformes. It has piercing mouthparts that punctures the skin of the bird and sucks the blood of its host. With its ability to fly from one bird host to another, the Pigeon fly has been found on many other bird hosts from the Orders Ciconiiformes, Falconiformes, Cuculiformes, Strigiformes, Coraciiformes, and Passeriformes. 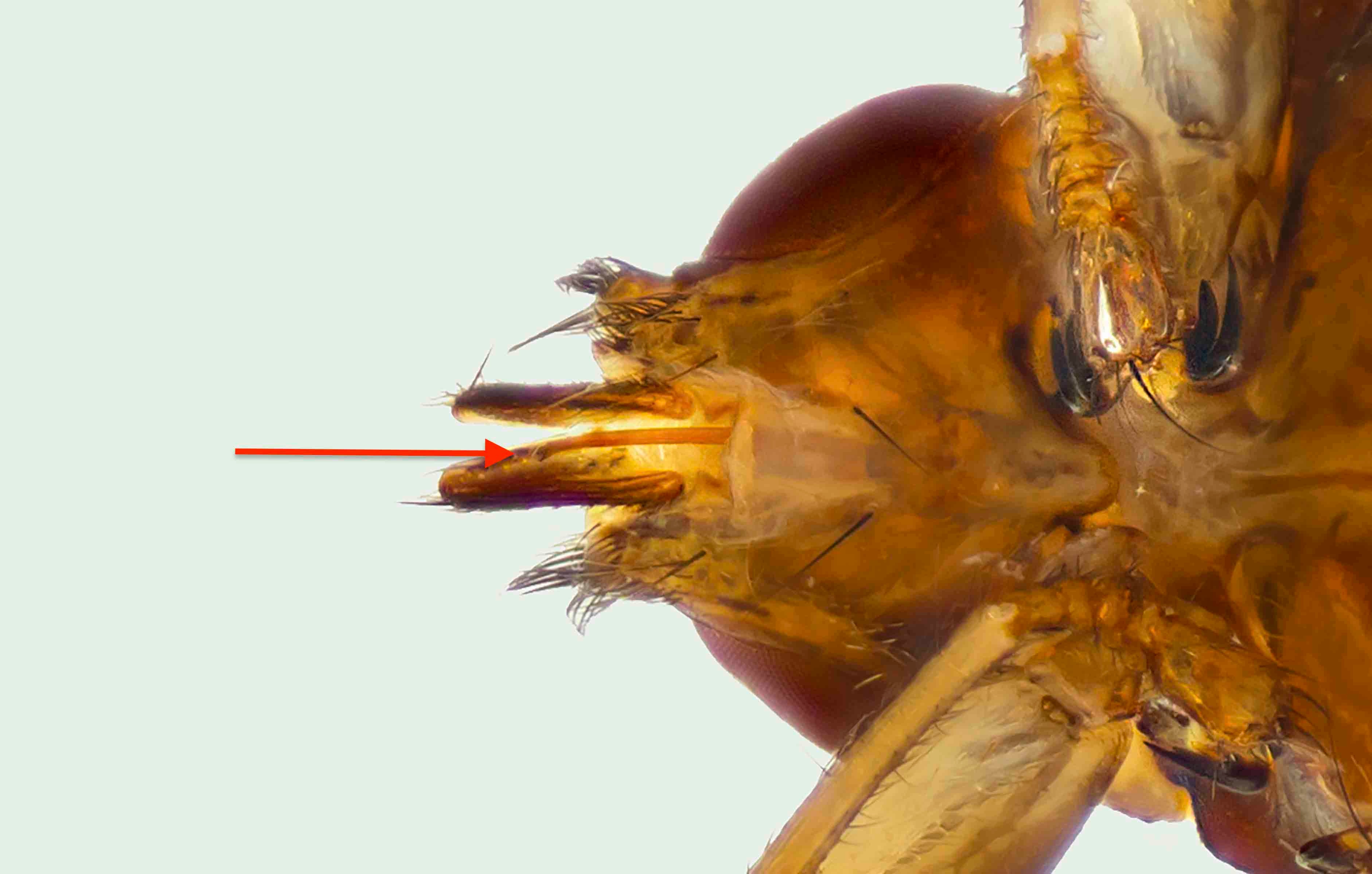 Phoresy is a type of commensalism where one species hitches a ride on another species to ensure its dispersal. Pigeon flies have a phoretic association withmite species, such as Myialges spp. and Ornitocheyletia hallae volgin, and amblyceran and ischnoceran lice. Many bird lice and mites are host species specific and they do not have wings to fly. As such, they need to find another method of moving around. Their answer lies in the pigeon fly. The pigeon fly (and other flies from the family Hippoboscidae) help disperse these lice and mites throughout a wide range of birds. The lice will only drop off when they have reached their specific host. This helps the lice and mites infect many birds without the need to travel on foot from one bird to another. This is especially important for these parasites as the hosts will eventually die. Hence, the Pigeon fly is an escape route for them to travel to another host to propagate and survive to pass on its genes to the next generation. 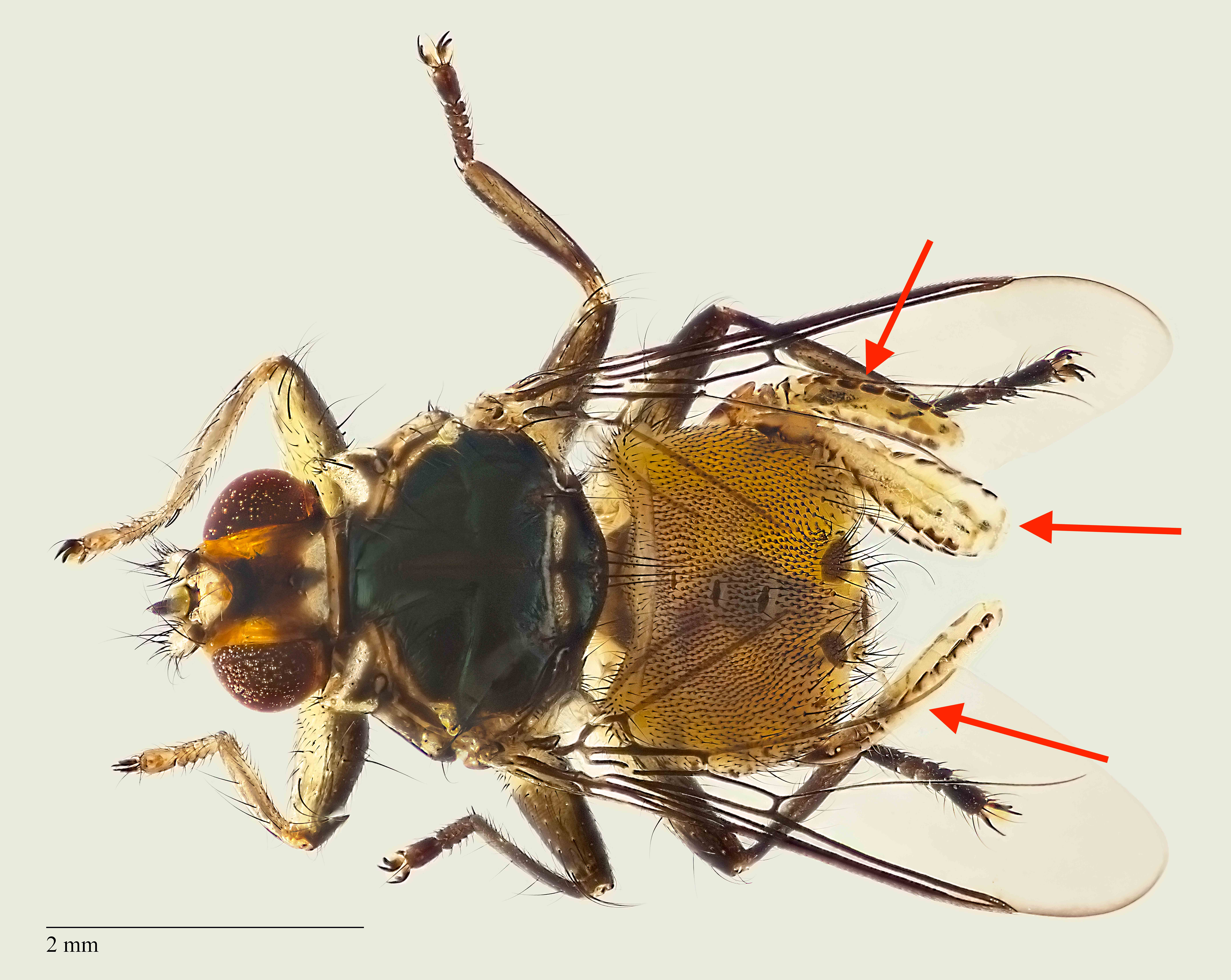 Figure 9: An image of the unidentified louse from Figure 7. Image credits: Leshon Lee

Figure 6: Photo of Pseudolynchia canariensis from a captive rock pigeon (Columba livia) with 2 amblyceran lice attached to it

Figure 8: Image of Myialges sp. egg cluster on the abdomen of a fly from the family Hippoboscidae. Image credits: Leshon Lee 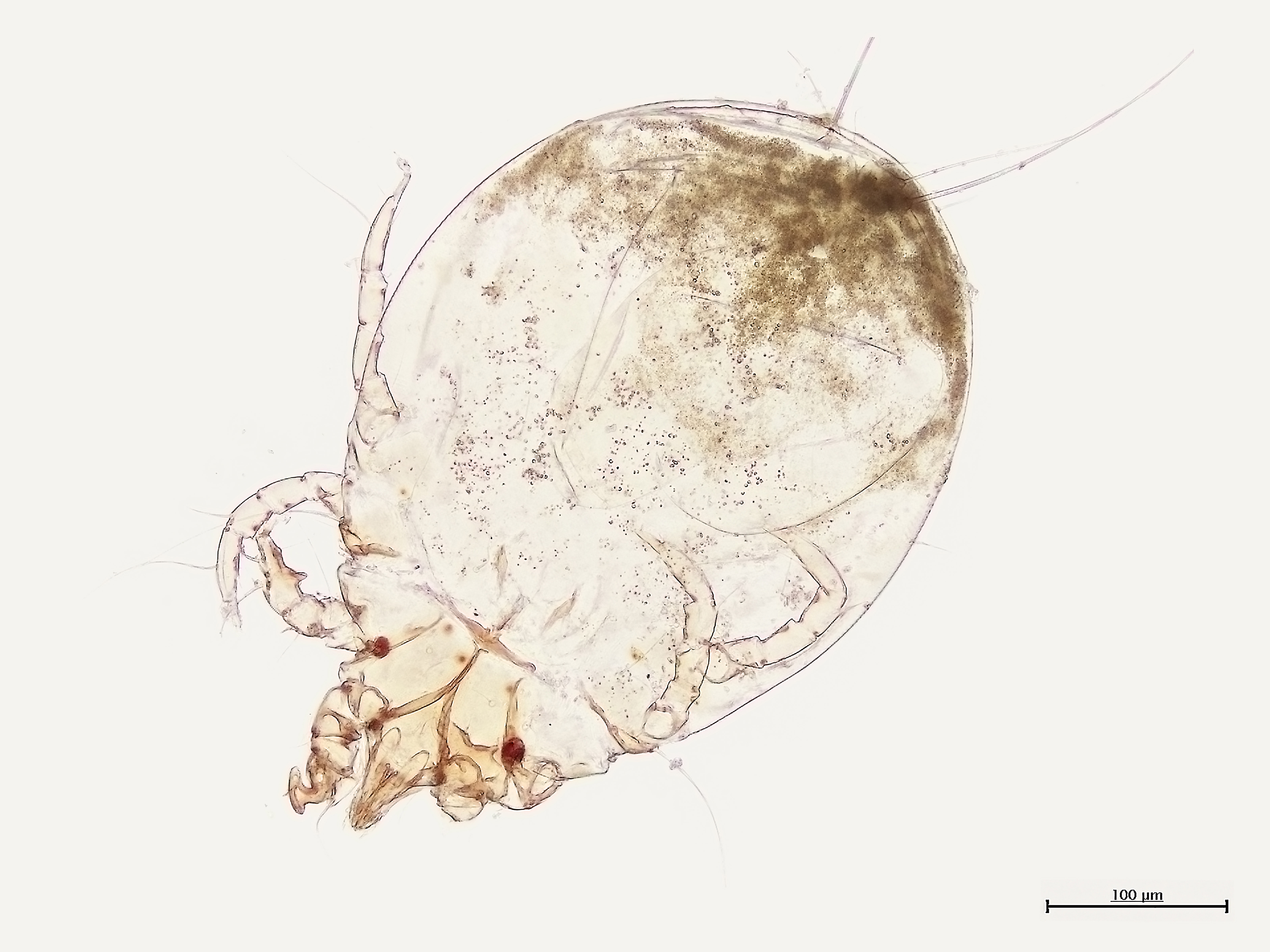 Figure 10: Image of Myialges sp. mite that was found on the abdomen of a fly from the family Hippoboscidae. Image credits: Mackenzie Kwak

Pigeon flies have been known to be a carrier of Haemoproteus columbae, a protozoan that causes pigeon malaria, around the world. However, it is not known if it is present in Singapore.

It may seem like an obvious answer but a daring study in 1931 done by G. Robert Coatney found that the Pigeon fly is able to feed on humans! Coatney recruited 2 friends to carry this experiment out by forcing the flies to bite them and suck their blood, effectively becoming the host for the flies. However, they only feed on human blood when there is a lack of choice, on in this case, when being forced to. A red and itchy bite mark appeared which persisted for 6 days, 9 days, and 20 days for Coatney and his friends respectively. The reason for the variation in the number of days taken for the appearance of the bite mark is unknown and such an experiment has never been repeated since then

This effectively shows that the Pigeon flies are host specific and only by feeding on birds will they be able to survive and reproduce. Therefore fret not! Unless pigeons have been wiped out throughout the world, humans do not have to worry about these little critters sucking our blood and potentially transmitting deadly diseases to us.

Pigeon flies are a cosmopolitan species and are found everywhere in Singapore and in most parts of the world (mainly subtropical and tropical) where pigeons can be found. Currently, the pigeon fly has only been found on the Rock Pigeon (Columba livia) and the Pink-Necked Green Pigeon (Treron vernans) in Singapore. More studies and counts are needed to establish the distribution of the pigeon fly in Singapore.

Figure 11: The original description of the pigeon fly.

If you ever find a fly scurrying around the feathers of pigeons, it is most likely a pigeon fly. Here are a few specific morphological features to identify them!

The 313 base pair barcode is as shown below: 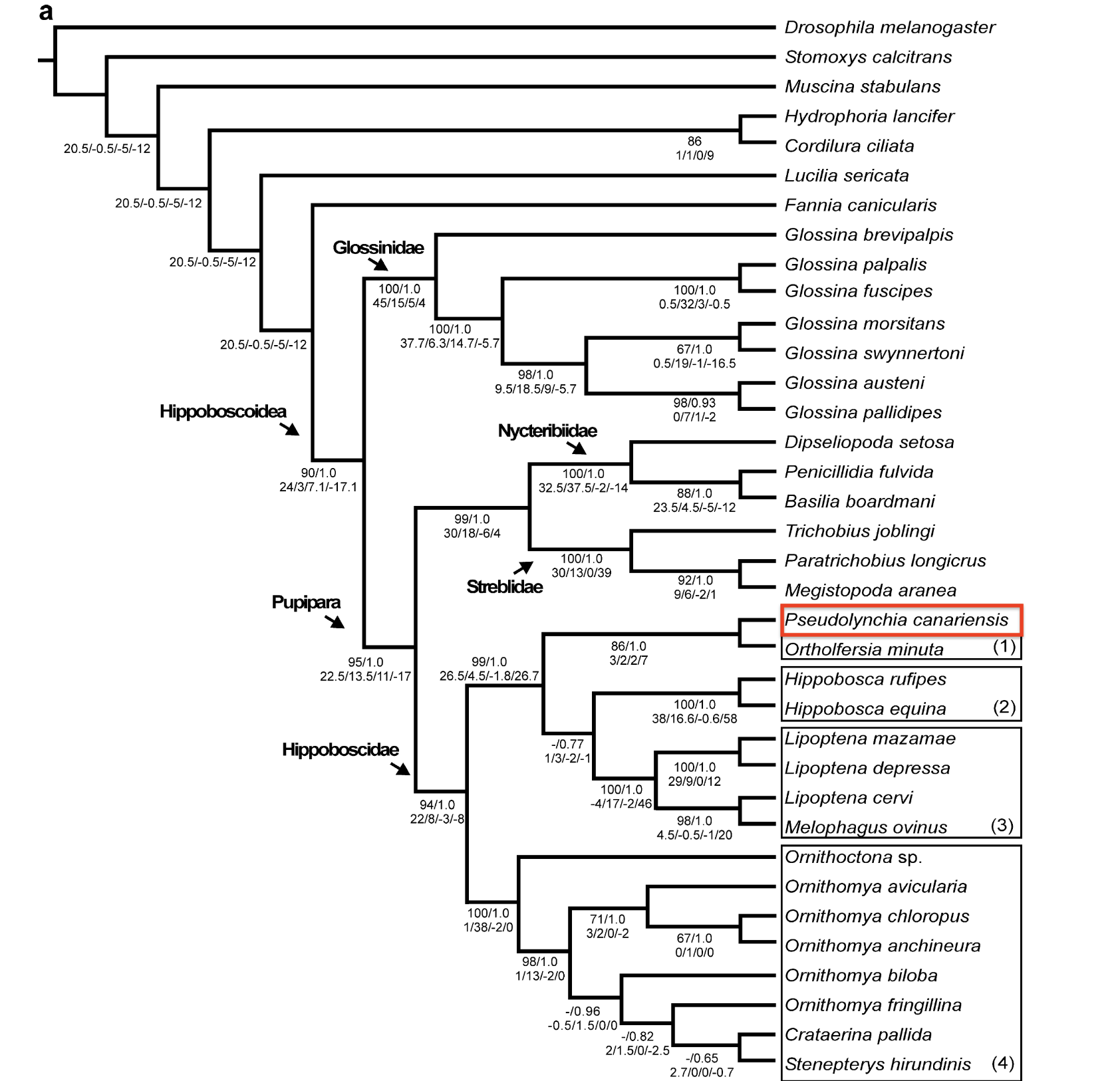 Petersen et al. (2007) sequenced a 760 bp fragment of the carbamolyphosphate synthetase (CPS) region of the CAD gene(also known as "rudimentary" in Diptera), 2kb of 28s DNA, and partial sequences of Cytochrome Oxidase 1(CO1) gene and 16s rRNA. This tree was built by Petersen et al. (2007) using maximum parsimony and Bayesian inference. Bootstrap values as shown in fig. 19 are generally high, thus showing high support for the nodes. The node containing Pseudolynchia canariensis has a bootstrap support value of 86 which shows that it is pretty well supported. However, the bootstrap values within the clade Ornithomya are less than 50. Additionally, the posterior probability values using Bayesian inference are generally high, with a value of 1.0 (Maximum value showing strongest support) for the node containing Pseudolynchia canariensis. However, those values should be taken with a pinch of salt because posterior probabilities have been criticized for providing an overestimate of support

According to one of the authors, Bayesian analysis was used as there were no Maximum Likelihood softwares available in 2007 that could handle a good bootstrap analysis for the dataset. More genes could also be sequenced to build the phylogenetic tree to see if those initially poorly supported nodes would have a higher bootstrap/ posterior probability value after factoring in more genes.

As seen in fig. 21, viviparity, which is the retention and growth of the fertilized egg within the maternal body until the young animal, as a larva or newborn, is capable of independent existence, has evolved very early on in the phylogenetic tree, resulting in presence of viviparity in all organisms within Hippoboscidea. However, at that time, the larvae were still able to move. It was only when "true" ectoparasitism evolved, then the larvae had reduced movement, resulting in the change from the larvae burrowing into the soil to pupate like the flies in the Glossinidae family to becoming incapable of burrowing and in some cases pupate within the mother's body. The host shift to bird evolved independently in the tree, thus showing convergent evolution.

: Lice from the most primitive group of chewing lice that specialises on both birds and mammals.

: Divide into 2 branches or forks.

: An association between two organisms in which one benefits and the other derives neither benefit nor harm.

: The upper side or back of an animal, plant, or organ.

: Flattened along the dorsoventral axis.

: Cells that line the interior surface of blood vessels and lymphatic vessels, forming an interface between circulating blood or lymph in the lumen and the rest of the vessel wall.

: A eukaryotic germ cell that divides by mitosis into other gametocytes or by meiosis into gametes during gametogenesis.

: A single physical example (or illustration) of an organism, known to have been used when the species (or lower-ranked taxon) was formally described.

: Lice from a group of chewing lice that specialises mainly on birds, with a small family specialising on mammals.

: A sporozoan trophozoite produced by schizogony that is capable of initiating a new sexual or asexual cycle of development.

: Forms and structural features of an organism

: The hardened last larval skin which encloses the pupa in some insects, especially higher diptera.

: A cell that divides by schizogony to form daughter cells.

: The posterior portion of either the mesonotum or the metanotum of an insect thorax.

: A motile spore-like stage in the life cycle of some parasitic sporozoans (e.g. the malaria organism), which is typically the infective agent introduced into a host.

: Any one of two or more biological types that is listed in a description of a taxon where no holotype was designated.

: The underside of an animal or plant; abdominal.