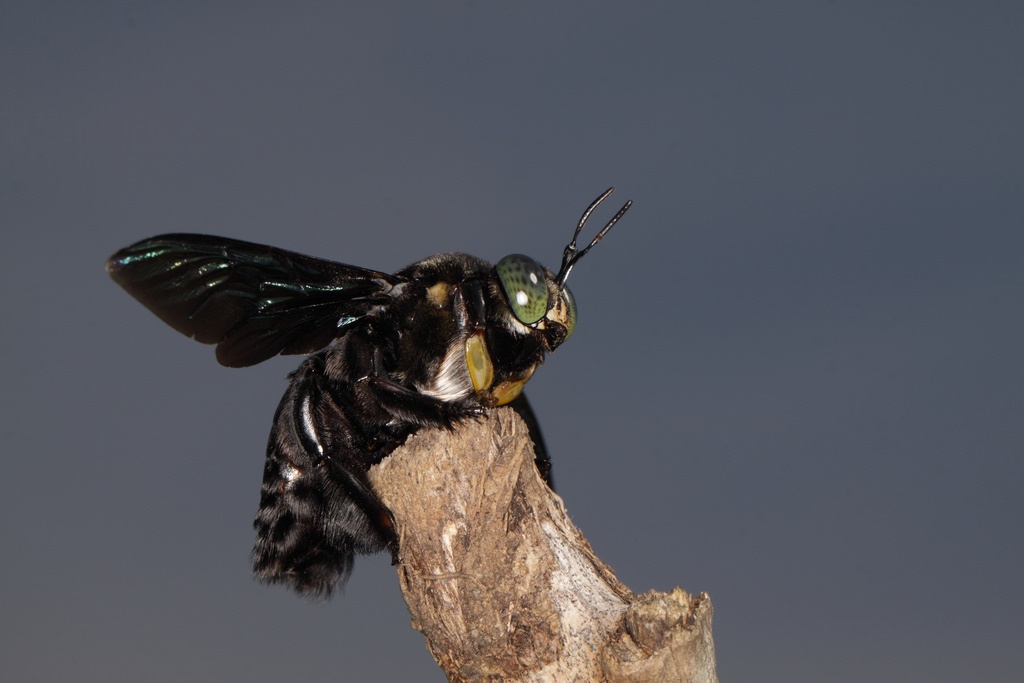 It is big. It is black. It is scary. These are just some phrases that a layperson will describe the largest bee in Singapore, the Tropical Carpenter Bee (Xylocopa latipes)1 . Despite being one of the largest species of bee in the world, one should not be afraid of its loud, droning hum because they are relatively unaggressive and rarely sting2 .The layperson commonly mistakes theXylocopaspecies as Bumblebees of the genusBombus3 . However,Xylocopaspecies have a shiny abdomen which differentiates them from theBombusspecies with hairy abdomen.

Xylocopa latipesshares many similarities withX. aestuansin terms of foraging, nesting and pollination behaviour—mostly covered by Ng Kai Yi in the species page 'Xylocopa aestuans'. Hence, this page would focus more on the other interaction that X. latipeshas with the environment. The page targets insect enthusiasts as well as students in the field of environmental biology and ecology.

Click here to link you to detailed labelling of the different body parts of a bee.

Due to its large size (largest bee in Singapore), Xylocopa latipes can be easily distinguished from the other carpenter bees found in Singapore. X. latipes is about the size of a 9 volt battery (Figure 2).

Although not taxonomically fair, but it is generally possible to distinguish the female carpenter bees of Singapore to 2 or 1 species based on thoracic hair colour alone (Table 3). But fair warning, this should only serves as a guide and has to be taken with a pinch of salt. For more detailed species delimitation based on morphology characters refer to section 2.2.

The real problem lies when trying to distinguish between X. latipes and X. auripennis because both species look very similar. However, X.latipes is generally larger in size than X. auripennis. Figure 4 presents the key to distinguish the Xylocopa species in Singapore:

Like the female Xylocopas of Singapore, it is generally possible to distinguish the male carpenter bees based on their thoracic hair colour (Table 6).

Presented in Figure 8 are additional morphological characteristics that describe X. latipes. This is to ensure precise delimitation of male X. latipes from the other Xylocopa species from Singapore.

The males have enlarged eyes which converges above the head (Figure 9b). This is unlike the female, whose eyes do not strongly converge towards the top of her head (Figure 9a). Additionally, the males also have the front white tarsus (Figure 7), which is absent in females.

Xylocopa latipes diurnal species and is most active from about 8am to 11am in the morning (personal observation, 2016). It is also a generalist when it comes to floral resource use—and will frequent large flowers due to its large body size (Video 10). For more detailed description, click here to go to the 'X. aestuans' page.

Xylocopa latipes holds on to a flower, shivering its indirect flight muscles at specific frequencies6 , triggering the release of pollen from the anthers of the flowers (Video 11). This is the process of buzz pollination. For more detailed description, click here to go to the 'X. aestuans' page.

At times, Xylocopa latipes uses its proboscis to cut through the tubular bases of flowers to obtain nectar (Video 12). The plant is not pollinated in the process of nectar robbing, and this behaviour reduces the reward (nectar) for other legitimate pollinators who visits the flower7 .
For more detailed description, click here to go to the 'X. aestuans' page.

During mating the male X. latipes uses his mid legs to hold onto the female thorax, pressing her wings down in the process (J. S. Ascher, personal communication) (Figure 13). The male then uses its front tarsi with the elongated white hairs to cover the female compound eyes. If the female tries to move he would then stroke her eyes, calming her down. This is similar to other species of solitary bees, like leaf-cutter bees (family: Megachilidae) with similar structures on their front tarsi8 9 .

Xylocopa latipes utilises wooden beams, logs or hollow bamboo to make their nest11 . In wooden beams or logs, X. latipes bores a tunnel with 2-6 branches which are half an inch in diameter12 ; in hollow bamboo they use the cut or broken end as the enterance. At one point in time there can be as much as 4 generations in one nest. However, such behaviour is damaging to wooden structures like houses5 , as they weaken the structure. The male does not play a role in constructing or providing for the nest. For more detailed description, click here to go to the 'X. aestuans' page.

There are mites that act as negative selection pressure on the host as they either are kleptoparasites (Horstia virginica; steals food from host) or by killing off the host eggs or larvae possibly consuming it as a resource (Sennertia americana).

Not all the mites are considered to interfere with the development with the host, in fact it was postulated that there is a positive selection for one of the mite species Dinogamasus sp. This genus of mites, feeds on microorganisms that potentially harms the bee larvae and pupa.

There are other mites that have a commensal relationship with the host. One species (Tarsonemus platynopodae) is a fungivore which helps the host to rid fungi from the nest; other species (Cheletophyes sp.) preys on smaller mites.

Generally, X. latipes can be found throughout Singapore and on some islands around Singapore. Figure 16 below depicts the localities where X. latipes has been caught from. However, the map may not be complete as there might be unexplored places with X. latipes sightings.

It was further postulated that both subgenus were separate but closely related lineages5 . This is evident from morphological evidence. Modifications to the first pair of legs were present in males from Platynopoda, while the modification were on the second pair of legs in Mesotrichia. The non-overlaping and apomorphic modification, within their own lineage, suggest the presence of 2 separate but closely related lineages.

Hence, this evidence suggest that Platynopoda is a subgenera on its own. However, further comprehensive phylogenetic analysis is required to fully understand the status of these lineages.

The high posterior probabilities seen in Figure 17 is due to the same relationship branches appearing in most of or all of the sampled trees used to construct the consensus Bayesian tree16 . This is caused by the Markov chain Monte Carlo computation sampling the same set of trees multiple times, resulting in an over liberal posterior probabilities.
On the other hand, the use of bootstrap values in the maximum parsimony tree as support for phylogenetic analysis is more appropriate. This is because the bootstrap values treats the original sequences as single evolutionary event realised with errors that occur at random probabilities16 . Hence, bootstrap values are more conservative and more appropriate as errors tat occur at random probability is always present in original sequences.
Presented in the same paper by Leys et al. (2002) is the maximum parsimony tree (Figure 17a) and maximum likelihood tree (Figure 17b) which might be a viable alternative to the linearised Bayesian tree. The common themes in all three trees are that the genus Xylocopa is further separated into 3 clades—Ethiopian (made up of African and Oriental clade), Xylocopa s. l. clade (geographically diverse group) and a American clade.
The 3 clade this is supported by all 3 trees just indicates that there were 3 common ancestors, 1 for each clade. These 3 common ancestors went through many speciation events to give the many subgenera seen in the trees. Additionally, based Figure 10c, the common ancestor for the Xylocopa S. I. clade begun to speciate first, followed by the common ancestor in the American clade and Ethiopian clade.

Perhaps, the common ancestor of all 3 clades was a global species very much like the Xylocopa S. I. clade. Then one of the individuals of the common ancestral species decided to nest and propagate within the new world (America) around 35 million years ago, and another decided to nest and propagate within the old world (Africa + Oriental) around 30 million years ago. This could possibly have given rise to reproductive isolation, and the common ancestral lineage began to split into 3 distinct lineages, producing the 3 clades that we see now.

On a side note, X. auripennis (other black Xylocopa species found in Singapore) is the representative for the subgenus Biluna, which was found to be basal to all the other subgenus with strong support from both the maximum parsimony and Bayesian analysis.

The type information is The locality is most likely to be erroneous. X. latipes is an "eastern species"12 , hence there is a high chance there might be a mistake in sorting or recording the locality.

This page was authored by Tan Yong Guang