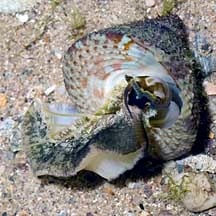 FeedingThis species is a non-selective grazer and is considered to be a nocturnal feeder. It feeds on macrophytes, blue-green algae and benthic diatoms. Things common in its diet include green alga (Enteromorpha sp.), red alga (Hidenbrandtia sp.), and benthic diatoms (Navicula sp. and Nitzchia sp.) T. maculatus is not a picky eater and will consume other food when its preferred food is unavailable (Thapanand et al, 1995). A study has found that moderate disturbance in terms of freshwater runoff and ecologically relevant amounts of the heavy metal copper can reduce grazing activity by T. maculatus without a corresponding decrease in macro-algae production (Elfwing and Tedengren, 2002). Grazing helps to maintain low macroalgal standing crops in the tropics, and such a reduction in herbivory can result in phase shifts, where large and fleshy macroalgae increases at the expense of hard coral cover (Done, 1992; Hughes 1994).ReproductionSeparate sexes, external fertilization. Eggs are laid singly in seawater and hatched as free-swimming planktonic larvae, or bound in gelatinous masses and then frequently hatching as crawling juvelines (Rome, 1998). Fertilized eggs metamorphose into the creeping stage within 7 days and can be observed by the naked eye within a month. T. maculatus can only spawn in the new moon period and may be induced to do so using thermal shock (Chunhabundit et al, 1994).

FoodCollected for its edible flesh and nacreous shell in Japan and Philippines and other Southeast Asian countries.Craft/DecorativeShells are utilized by shellcraft industries, sometimes serving as mother-of-pearl or as lime material.

StampsT. maculatus is featured on a 1985 stamp from the Cocos Islands (Keeling Islands):

T. maculatus is widespread in the Indo-West Pacific, from East Africa to Melanesia; north to Japan. and south to Southern Queensland and New Caledonia. Here is a map showing the distribution (Rome,1998):

Want to know for sure that the snail you're staring at on a rocky shore is T. maculatus? Here are some simple pointers on how to distinguish T. maculatus from other similar Trochidae species. (images from Rome, 1998) 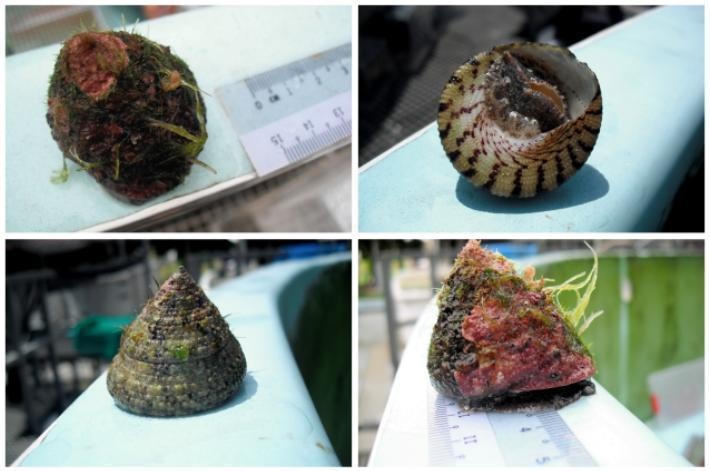 Here are the resulting phylogenetic trees from 2 studies that have included T. maculatus.A molecular phylogeny by Williams et al. (2010) for Trochidae and Calliostomatidae based on analysis of concatenated sequences from four genes (28S rRNA, 12S rRNA, 16S rRNA and COI) produced by Bayesian analysis incorporating an uncorrelated relaxed, lognormal clock using BEAST. All taxa for which sequence was available for both 28S rRNA and at least two mitochondrial genes were included. Tree is a maximum clade credibility tree with median node height based on 67,500 trees. Support values are posterior probabilities (PP) (only shown where PP > 50%). All trochid subfamilies were recovered as monophyletic groups as indicated by grey boxes and are labelled on the right in grey text. No scale bar is provided because the root was arbitrarily set to one, and all other branch lengths are relative. Species names used in trees are ‘traditional’ names and do not reflect changes to taxonomy suggested by this study.

Below is a Wagner tree illustrating the hypothetical phylogenetic relationships among 6 taxa from the genera Trochus and Tectus. Total tree distance was 2.419 (Borsa and Benzie, 1993).

Here are some links to databases providing sequences for phylogenetic studies and other uses:Nucleotide (14)Protein (5)PopSet (7)Taxonomy (1)

If you have any suggestions or comments, please feel free to start a discussion under the 'Discussion' tab at the top of this page. All comments will appear in this section. Alternatively, you may directly click on a post below to reply to it.

This page was authored by Jamie Low Su Lin