Trigonon = ( a triangle or hatchet) and Stigma = (a spot or brand)

hetero = (differing) morpha = (form); indeed T. heteromorpha can be intuitively observed to be different from T. somphongsi, T. espei and T. hengeli; the latter two can be easily mis-identified as one another. 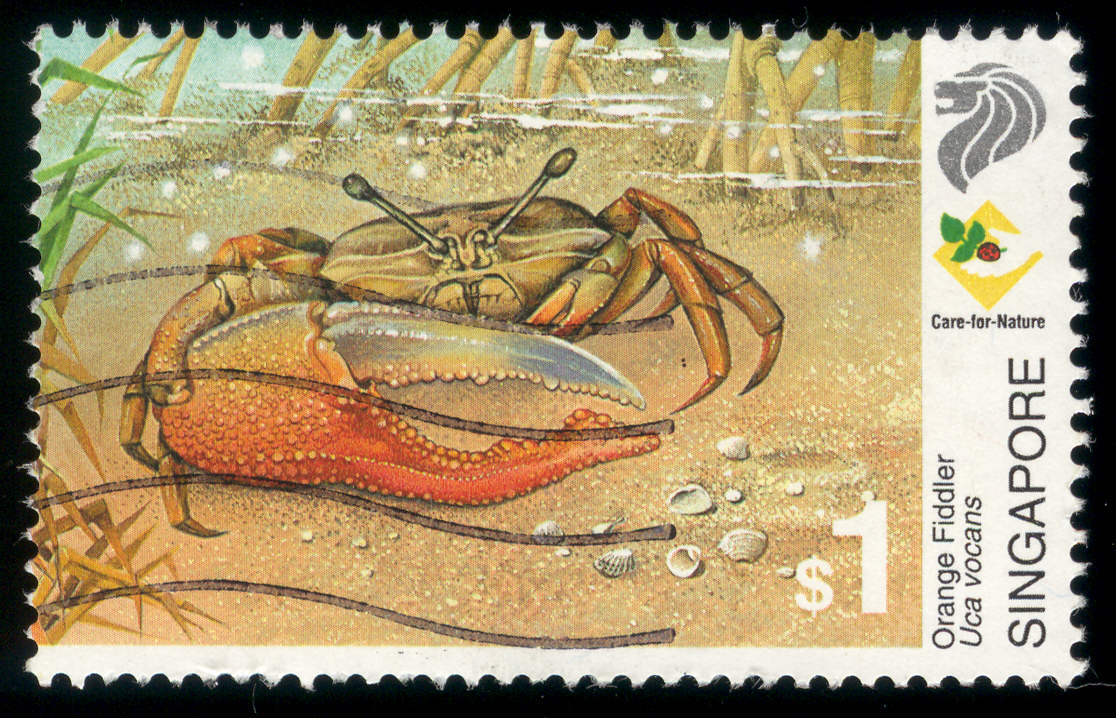 Singapore local postage stamp with an illustration of Trigonostigma heteromorpha.

Posterior half of the body possesses a broad bluish-black to black area almost representing a triangle (Mohsin, 1983; Kottelat, 1993). The dorsal and ventral side of the triangle runs parallel to the dorsal and ventral side of the body, the apex of the triangle is directed posteriorly up to the caudal peduncle and its base runs downward from below the dorsal origin to a point above the pelvic insertion (Mohsin, 1983).

In terms of identification, the broadness of the triangular blotch serves as a distinct character state that differentiate it from Trigonostigma espei and hengli, which both possess a triangular blotches that are intuitively observed to be smaller than that of heteromorpha. Quantitatively, I would hypothesize that the TB/Body Dept ratio of T. heteromorpha is way above 50%, while that of espei and hengeli is 50% or lesser. TB = Triangle base (here refer to the side that is more or less parallel to the caudal peduncle). 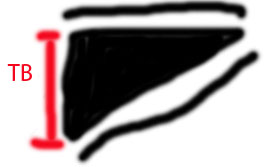 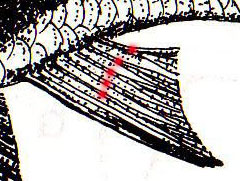 Trigonostigma heteromorpha are surface to midwater dwellers. They can be found in und in forest streams & major peat swamp. T. heteromorpha are indigenous to Singapore. At present, it survives only in certain small streams (pH = 5 to 6) in the central catchment forest in Singapore, and currently listed as endangered locally (Lim and Ng, 1990). 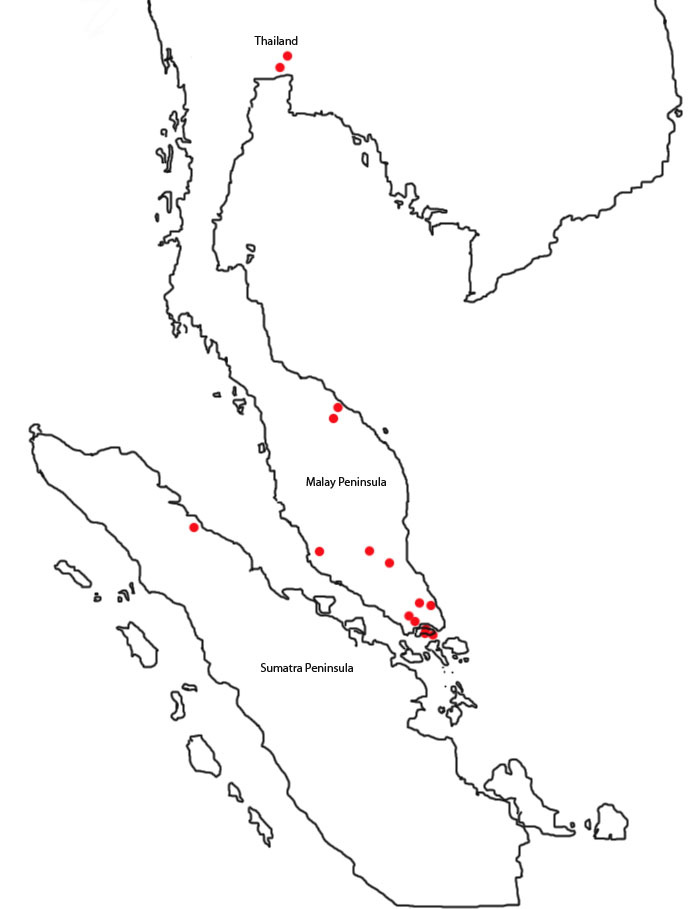 MAP 1: Distribution map of Trigonostigma heteromorpha: (RED DOT = present of T. heteromorpha). This distribution map is plotted based on the information of collected specimens below (table 1); it is a pitty that GPS coordinates were not readily available. Specimen from the trade are not included in the map.

The distribution shows that most of the specimens were actually collected from the Malay Peninsula. Specimen collected from Khlong Toh Deang (Thailand; Bangkok) were not plotted onto the map.

The earliest reference with a brief species description of Rasbora heteromorpha that is accessible and written in English is in the book Freshwater fishes of Singapore by Eric R. Alfred in 1966. According to Eric (1966), Rasbora heteromorpha was first described from specimens taken from Kuala Lumpur; Negri Sembilan and Singapore; lake in the Botanical Garden.

According to the information provided by the catalog of fishes (CAS), Duncker deposited most of the specimen he collected into the Zoological Museum of Hamburg (ZMH), however no holotype was designated, eventually he designate one of the specimen he collected from Semunga-Benung, Malaysia as the lectotype, which I personally think is the holotype. One of the paralectotype was deposited in the Zoologisch Museum, Amsterdam (ZMA).

The specimens that were being observed by Alfred (1966) were actually those collected by R. Hanitsch in 1912, N. Smedley in 1927 and Alfred himself in 1963 and 1966. He also had a chance to observe the 3 paratypes that were being deposited in the Zoologisch Museum, Amsterdam in 1901.

Kottelat (1999) did a re-description of Rasbora heteromorpha, and placed R. hetermorpha, R. hengeli, R. espei and R. somphongsi into the genus Trigonostigma; more of a genus hypothesis. Individuals placed in the genus Trigonostigma exhibit unique breeding behaviour during which eggs are spawned at the underside of broad leaves and similar structures. This unique spawning behavior differentiates individuals in Trigonostigmafrom the rest in the genus Rasbora. In the latter, the eggs are spawned in mid-water or among plants, for example Rasbora dorsiocellata spawns on the upper surface of submerged leaves close to the water surface (Wickler, 1976). It is important for systematists and taxonomists to realize that names above the species level are generally not objective and are mainly the result of following the Linnaean classification system, hence genus boundary can be subjective. Nevertheless, there are evidence that the genus Trigonostigma is monophyletic.

The genus Trigonostigma was being introduced by Kottelat and Witte (1999) as a genus hypothesis (refer to Nomenclatural History above). This separation was made on the basis of the spawning method that differs from all other rasbora; in these four species, the female attaches the eggs to the underside broad leaves, and the male comes along to fertilize them. Other species of rasbora are egg scatterers. Subsequent studies (Conway, 2005) have confirmed this division on the basis of phylogenetics except for T. somphongsi. 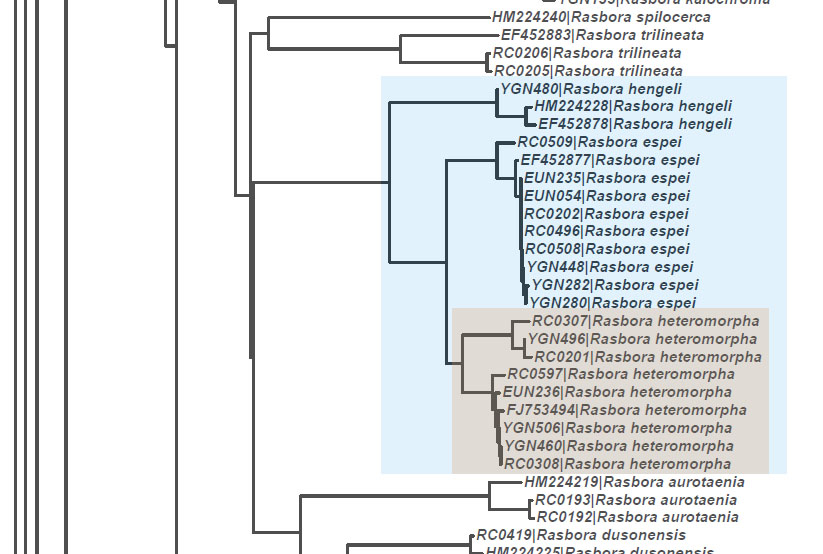 The above is part of a neighbour joining tree based on cytochrome oxidase subunit 1 DNA sequence showing the monophyly of the Trigonostigma genus, this group is nested in the larger Rasbora clade. This definitely shows us that genus boundary is subjective, however if the phylogenetic concept is being applied, Trigonostigma is defintely a monophyletic group according to this piece of information. Cladogram based on morphological characters have also shown that the Trigonostigma is a monophyletic group (Refer to Figure 1 & 2 below) (Conway, 2005).

There are currently no data regarding phylogenetic relationship of the Trigonostigma somphongsi to the rest of the species within this group, except for those provided by Kottelat and witte (1999). 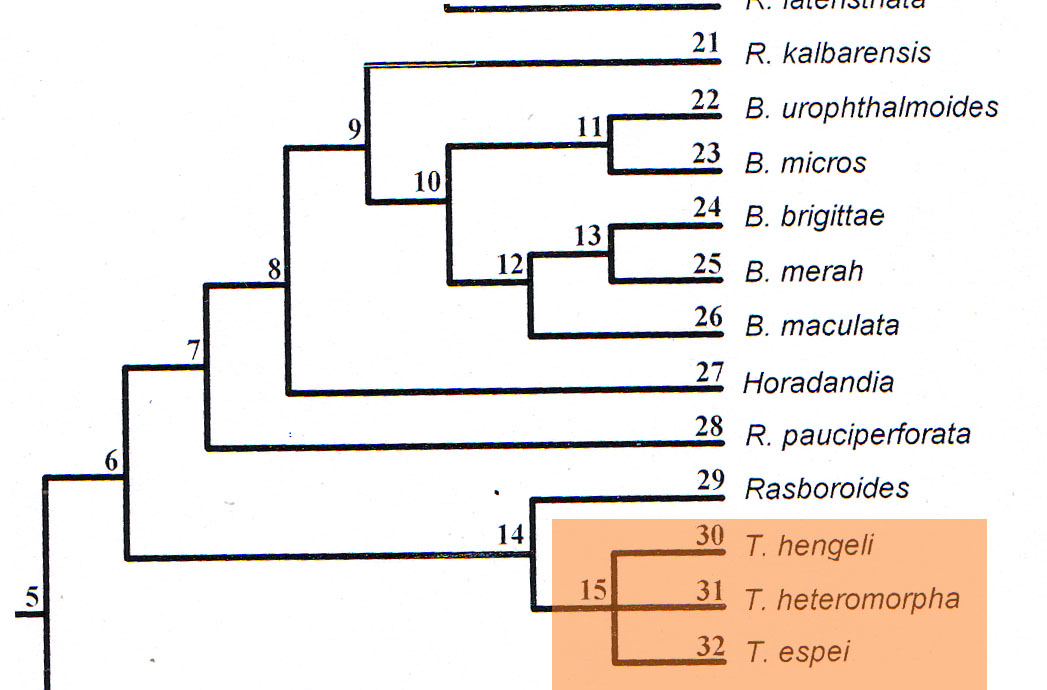 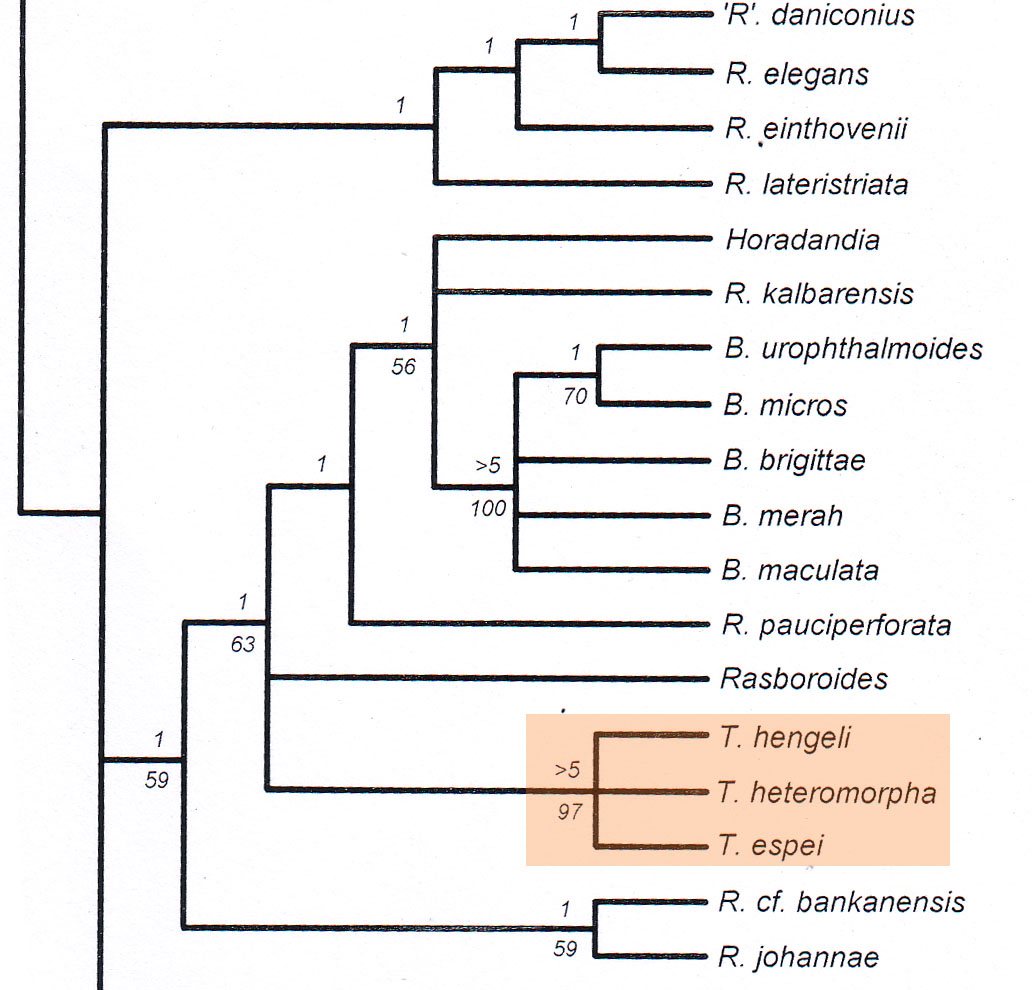 *Urohyal: median and posterior elements in the hyoidean arch of fishes (In simple terms, it's a piece of bone for lower jaw muscle attachment).

Thines (1966) studied the schooling behaviour of T. heteromorpha in the presence of alarm substances in-vitrolly (substances secreted by the epidermis of fish when they are under threat, eg. upon observing the presence of predator.).

The general findings from this paper suggests that schooling density in T. heteromorpha is higher in the presence of light, and lower in darkness, irregardless of presence or absence of alarm substances.

Trigonostigma heteromorpha is more responsive to alarm substances in the presence of light, as indicated by increase in schooling density, this suggest that phobic reaction spreads more easily when optic information is available in T. heteromorpha.

Please use the Genbank Accession numbers below to search for the related DNA sequences.

This page was authored by Yi Youguang