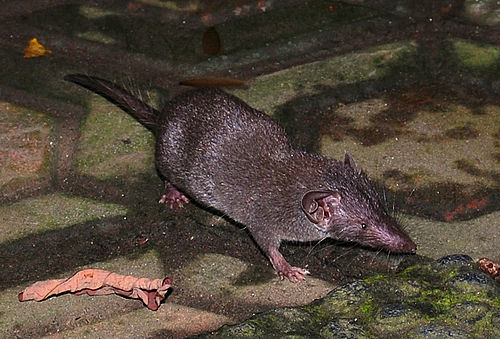 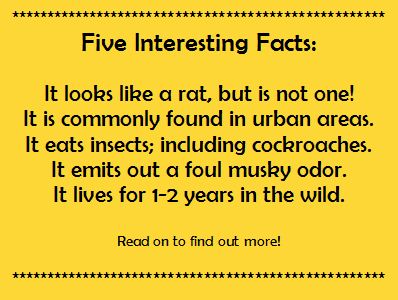 This is not a rat! Photo by W. A. Djatmiko, Wikipedia Commons

The word “shrew” was originally coined to refer to a small mammal. The Old English form of the word was “screawa” or “shrew-mouse”. The other meaning of “shrew” as a "spiteful person" came from the Middle English form “shrewe”, referring to an “evil or scolding person”, arose from then negative perception of the animal, which was believed to have a venomous bite. This was later discovered to be true in some species of shrews. The Asian House Shrew was named as it is commonly found living alongside human habitations (houses) in Asia.
ref: Schmidt, 1994 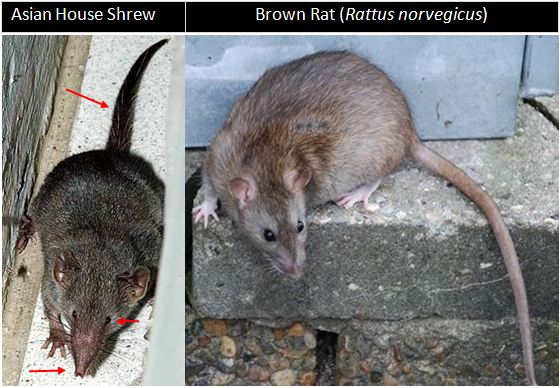 Among the shrew family, the Asian House Shrew is the largest species of shrews. It can be differentiated from its closest relative, the Asian Highland Shrew (Suncus montanus) by its bigger size, thicker tail and lighter pelage, both dorsal and ventral.
ref: Meegaskumbura et al., 2010

Contrary to popular notion, this species is not native to Singapore, but is an introduced species. The Asian House Shrew is believed to have originated in the forest of central India. With the help of early human transportation both on land and sea, this species then dispersed to surrounding areas, including Africa, Middle East, Southeast Asia and Japan.
ref: Ellerman, 1961; cited in Meegaskumbura et al., 2010; Global Invasive Species Database, 2006; Corlett, 1992 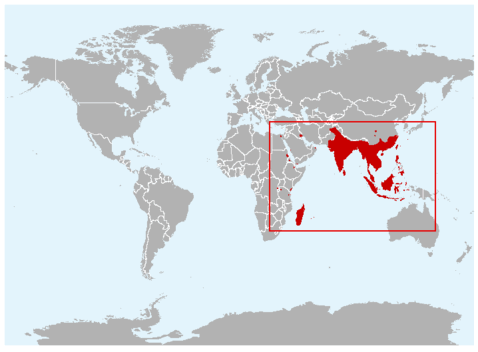 In general, the body colour, size and chromosome number varies between localities (between different populations at different areas).

Adults
Colour: Light grey in Sri Lanka, grey in Bangladesh, to dark grey in almost all areas of Asia
Length: Head + Body up to 15 cm; tail up to 9.5 cm
Face: Small eyes, long pointy snout with conical sharp teeth, long jaws containing rows of pointed teeth
Tail: Thick at the base and hairy
Weight of females: 23.5 g to 82.0 g
Weight of males: 33.2 g to 147.3 g
Sexual dimorphism: Males generally larger than females and having well-developed scent glands on the sides of its body (in females this is variable)
Chromosome number: Generally 2n = 40; but can range from 2n = 30 or 32 in South India and Sri Lanka to 2n = 35 to 40 in the Malay Peninsula 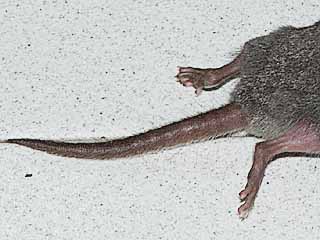 Tail thick at the base. Photo by Ria Tan. www.wildsingapore.per.sg 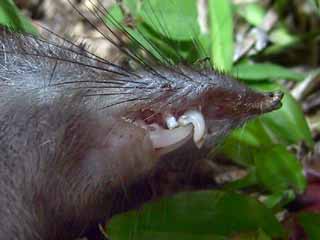 More information on the anatomy of Suncus murinus is detailed in Sharma, 1958.

Habitat
Asian House Shrews are commonly found in human habitations, including urban areas. They can also be found in the forest.
ref: Global Invasive Species Database, 2006

Feeding habits
Asian House Shrews are insectivores and eat mainly a wide range of insects. They are also opportunistic feeders and feed on variety of other food items such as plant material, a wide variety of invertebrates such as cockroaches, as well as discarded food items. The Asian House Shrew has a high metabolic rate and are nocturnal and hence requires multiple feeding periods throughout the night.
ref: Chua & Lim, 2011; Balakrishnan & Alexander, 1979

Reproduction
The mating system of the Asian House Shrew is unknown. Sexual dimorphism in sizes suggest that they may be polygynous, however as both sexes are known to collect nesting material before the female gives birth, it is suggested that they may be monogamous.

Reproduction occurs throughout the year, peaking during spring and summer. Female Asian House Shrews reach sexual maturity at 35 days old and do not have a behavioral estrus cycle; the process of mating will induce the development of the follicles and start of ovulation. The sperm will spend a long time in the female's reproductive tract before fertilizing the egg.

Nests are constructed in hidden areas called snags using any available resources such as leaves and other loose materials.

Gestation period usually lasts for 30 days. Two litters of 4 to 8 young (usually 3) may be born in one year. The young are weaned at 15 to 20 days old. The young stay in the nest until they are about 75% grown. Should they travel out of the nest however, the young will travel in a convey train with the mother, each clamping its jaws tightly to the rear or base of the tail of the preceding shrew. This caravaning behavior is reported to appear only in very young shrews, initially for the mother to retrieve her straying young back to the safety of the nest. Later on, when the young's eyes are opened, caravaning serves as an environmental exploration.
ref: Global Invasive Species Database, 2006; Nowak, 1999; Muhammad et al., 1999; Tsuji, 1984

To see how the caravaning behavior looks like (in another species of shrew), check this out!

Defense mechanism
Asian House Shrews have been reported to emit a musky odor to deter predators. The musky odor also discourages other males from following, allowing even distribution of the Asian house shrew population. This musky odor is secreted by the sweat glands on its throat and behind the ears which may also be trapped by the oily secretions of the specialized sebaceous tubules localized in the sideglands to make the odor last. This musky odor also contributes to its alternative common name, Asian Musk Shrew.
ref: Dryden, 1967

Sound
It emits a variety of chirps, buzzes or shrill squeaks which may be associated with aggressive behavior. The constant small chattering noises it makes resembles the jingling of coins, and hence is also named as the Money Shrew in China.
ref: Chua & Lim, 2011; Burton & Burton, 2002; Nowak, 1999

Negative
Due to its high reproductive rate and low predation risk, Asian House Shrews are a growing ecological threat to many plant and animal species and are considered an invasive species in some countries. Their ability to survive in high densities near human habitations, while damaging foods and other materials has also resulted in them being labelled as pests in some areas. More studies on the management of this species in urban environments are required.
ref: Global Invasive Species Database, 2006

Positive
Being insectivores, Asian House Shrews predate on many insect pest species, such as cockroaches, hence helping to control their population. Asian House Shrews have also been successfully domesticated as a laboratory animal in USA and Japan and is a model species in medicinal, physiology, behavioral and psychology-related research fields.
ref: Global Invasive Species Database, 2006; Tsuji, 1999

In our homes - problems and management
In Singapore, Asian House Shrews are not considered pests, unlike the following commonly-found rodents: Brown Rat (Rattus norvegicus), Roof Rat (Rattus rattus) and House Mice (Mus musculus). Asian House Shrews however may be a disturbance for its strong and unpleasant musky odor or its incessant loud squeaks. They may also destroy stored grain products. Asian House Shrews may also harbor rodent-borne viruses such as leptospirosis but potential for transmission to humans has been poorly documented and probably much lower compared to rats.

Installation of rodent proof structures can exclude shrews, as well as regular mowing of the lawn which decreases their preferred habitat and food(insect) availability. Presence of cats may also reduce their densities, although they seldom eat them. Asian House Shrews can be trapped with mouse traps baited with a mixture of peanut butter and rolled oats. More information on the management of this species can be found here.
ref: Rahelinirina, 2010; Global Invasive Species Database, 2006; Schmidt, 1994 and references therein

Warning!
The following sections on taxonomy and phylogenetics of the Asian House Shrew may not make for an easy reading, especially if you do not come from a scientific background. Feel free to skip the following sections to the commenting box if you like, or if you feel brave, do read on and gain new knowledge! Brief explanations of each sections are provided in italics. However, it is recommended that you Google or Wiki up any unfamiliar terms.

Every living-thing on Earth has a name, and is classified systematically into different hierarchical ranks. The following shows the biological classification of the Asian House Shrew.

Subspecies - Past and Present

A species can be further differentiated into subspecies, as summarized here for the Asian House Shrew.

Due to its wide morphological variation in body size and tail length, individual populations of Asian House Shrews were classified into different subspecies or races by early mammalogists. Today, most of these subspecies classification have been disregarded as it is currently not possible to have a clear allocation of all listed taxa to subspecies. In 2010, two populations of Suncus murinus in Sri Lanka (S. m. murinus and S. m. kandianus) were identified as putative hybrids of Suncus murinus and Suncus montanus, the closest relative of Suncus murinus. However, additional gene comparison studies are required to evaluate the extent of hybridization.
ref: Meegaskumbura et al., 2010; Hutterer, 2005

Original type descriptions and locality show who first found the organism at where and gave it a name. Specimens collected are then stored at museums so that it will be useful for taxonomists to compare with later collections to confirm that they are of the same species.

The specimen collected by Ehrenberg can be found in the Museum für Naturkunde, Berlin, where Ehrenberg's collections are stored. Its images are as shown:

A specimen was collected in Singapore in 1940 and is displayed at the Raffles Museum of Biodiversity Research (RMBR) . 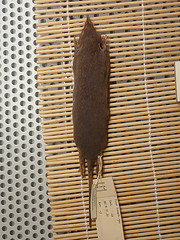 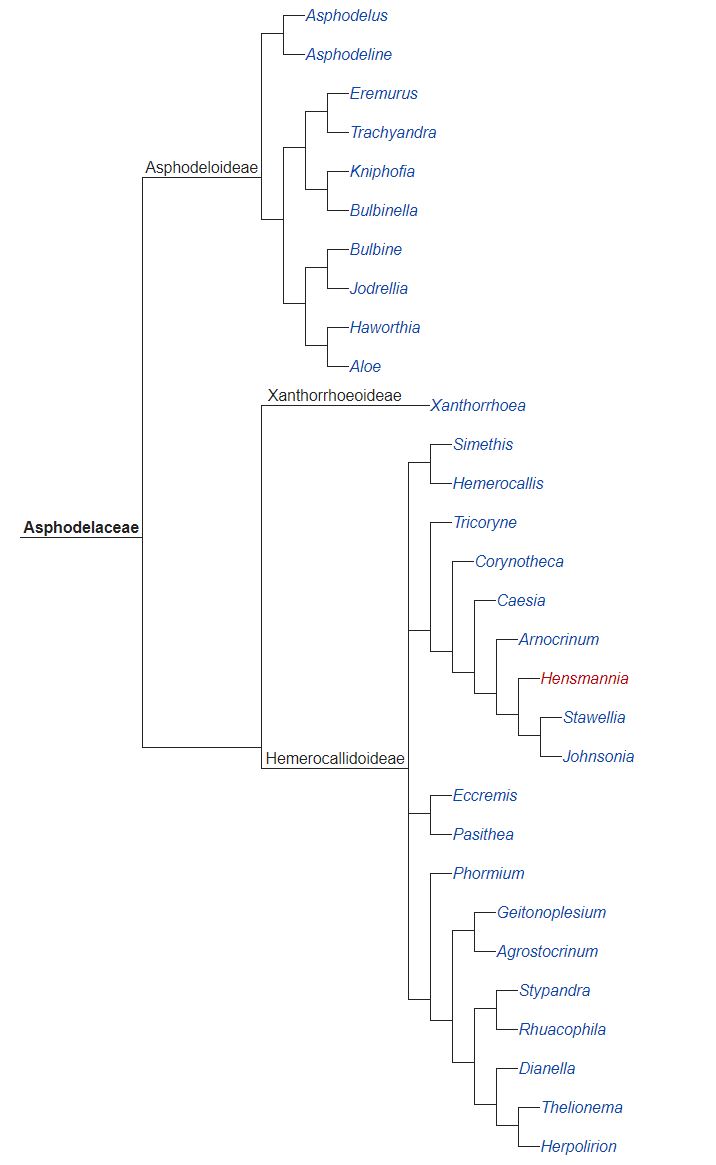 A simplified representation of the phylogenetic tree of the genus Suncus. Only some species are shown here. Note that the Asian Highland Shrew is the sister taxon of the Asian House Shrew (highlighted).


This phylogenetic tree was modified from Figure 2A of the following paper: 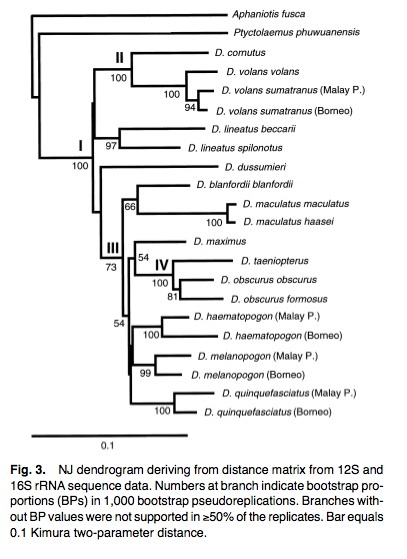 
This image was taken from Figure 2 of the following paper:

This page was authored by Mei Ailian