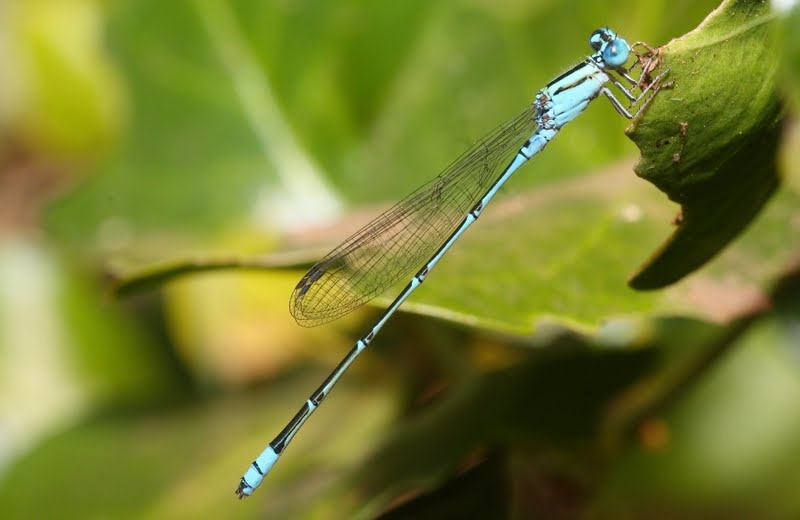 Pseudagrion microcephalum is a pretty damselfly commonly found in parks and water bodies around Singapore. Do not be fooled by these delicate insects because they are in fact fierce predators both in the larval and adult stages. These fascinating creatures possess intriguing mating behaviours which are often deemed to be rough sex by many. Pseudagrion microcephalum is an Odonate Zygopteran--Odonates are one of the oldest insect taxons in the world -- some species of this prehistoric taxon even existed before the dinosaurs! So next time you spot this creature, think about its way of life and evolutionary history and appreciate the beauty that is Pseudagrion microcephalum.

Use of labial mask in prey capture and mastication by unidentified true dragonfly* larvae. *Note that this is not a damselfly

After a series of 10-20 molts which occur over a several weeks, the final instar larvae crawls out of the water and finds a spot in the vegetation to rest on. Next, the larval cuticle splits along the dorsal side and the adult damselfly emerges. This process may take close to an hour and the damselfly is extremely vulnerable to predation at this stage. After emergence, the adult remains motionless as haemolymph is pumped through the body, expanding its wings and hardening its body (Corbet, 1962).Pseudagrion microcephalum may emerge in the earlier parts of the day in sheltered areas for protection against wind and predators (Corbet, 1962). Adults are carnivorous, visual predators and feed on smaller insects such as mosquitoes. 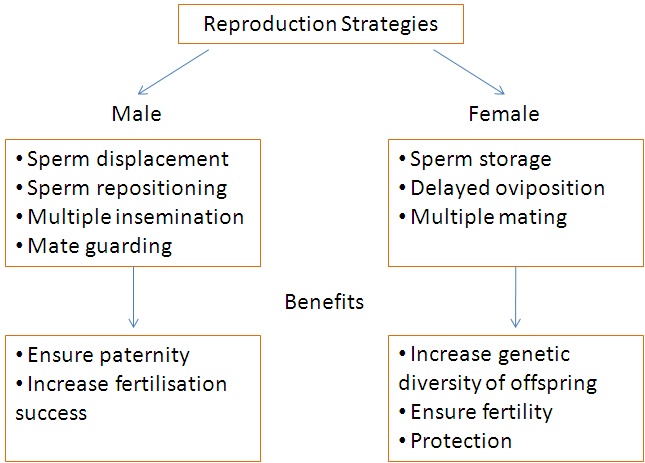 Overview of the different reproductive strategies adopted bymale and female Odonates and their associated benefits.Image by Shu Min

Odonate mating and reproduction is highly fascinating and intriguing. Female Odonates are capable of storing sperm in specialised sperm storage organs, only fertilising the eggs just prior to oviposition. Their tendency to mate multiple times with different males creates sexual conflict because males have to contend with other males in order to achieve maximum fertilisation success. This has led to the evolution of strategies on the part of the male Odonate to maximise his fertilisation success and ensure paternity over the highest proportion of the female's eggs (Cordoba-Aguilar et al., 2003). 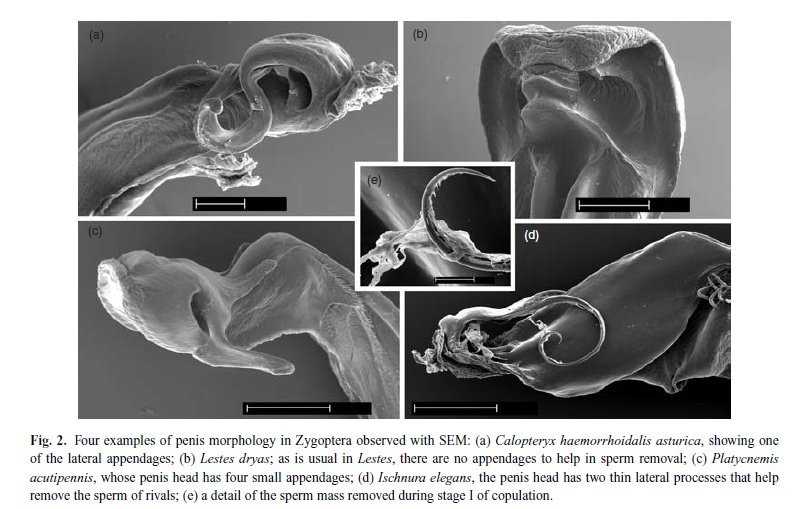 Odonate penises are complex structures which vary largely between species. Some species possess specialised structures to scrape out previously deposited sperm, some do not. Some penises even have spines to aid in the removal of sperm (Codero and Miller, 1992). Interesting, the specialised sperm storage organs in females show increasing complexity in correspondence with the complexity of the male penis in certain species (Waage, 1986). Odonate reproduction represents an arms race--where males and females continually coevolve against each other to maximise benefits for themselves.In addition to the strategies described above, andromorph females may also exist in a population. These females look like males superficially and this prevents their harrassment during mating and oviposition by other males. However, they run a risk of not obtaining mates when the number of males are low. 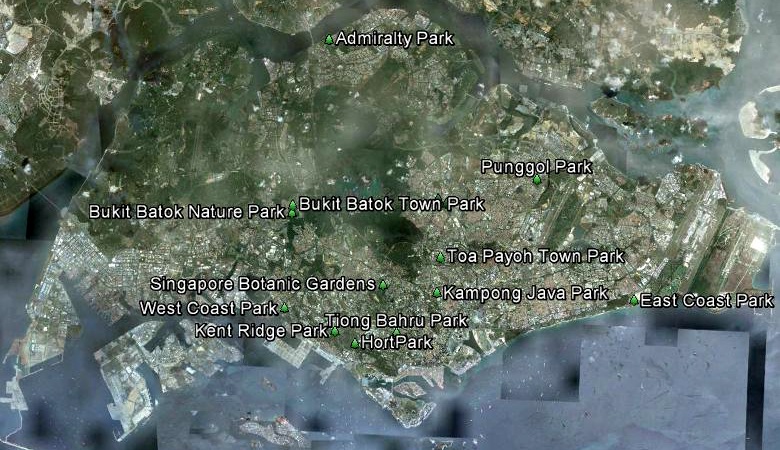 Globally, Pseudagrion microcephalum occupies a range spanning from India to Australia, and the Solomon Islands.

Odonates are commonly used as bioindicator organisms of water quality. The Odonate larval stage occurs in aquatic habitats and thus, is sensitive to fluctuations in water quality. Larvae require oxygen-rich water, and thus their absence can indicate low oxygen levels in the water as a result of pollution (Maine Dep, 2011). As many species require strict environmental conditions to survive, an assemblage of Odonate species in a water body represents a combination of ideal, pristine microclimates present at the site to promote such diversity (Cordoba-Aguilar, 2008).Adult Odonates are conspicuous, easily captured using a net and thus are highly accessible indicators of water quality. A healthy population of adult Odonates at a site often suggests a thriving larval population in the associated water body, indicating good water quality. In addition, there is much taxonomic information regarding Odonates, easing the process of species identification.The beauty and grace of Odonates also makes them charismatic organisms--this can elicit public empathy and eventually political support for environmental causes (Cordoba-Aguilar, 2008).Pseudagrion microcephalum is a more tolerant species (Orr, 2005) and its presence may serve to show that the water body in question has achieved the minimal water quality to support an Odonate species.

Pseudagrion microcephalum exhibits sexual dimorphism, which means that males and females look different. Males and females can be distinguished by looking at their colour and examining their genitalia.

There are about 1,100 described species in Coenagrionidae, out of which 21 can be found in Singapore (RMBR, 2012). Pseudagrion microcephalum is one of them.

What colour is it? Does it have any patterns?Species identification for Pseudagrion microcephalum, as with all Odonates, relies heavily on colour. However, this can pose several problems due to:

How do I identify the larvae and match them to the adult?The larvae of Pseudagrion microcephalum can be identified and matched to the adult via DNA barcoding. This method is gradually being adopted due to the difficulties in larval identification via the use of morphological characters. Alternatively, Odonate larvae can be captured and reared to emergence to find out which species they are. However, this is time consuming because some larvae are long-lived and emerge under conditions which are not known.

Can I use other features?Pseudagrion microcephalum can be identified as a Coenagrionid by examining features of its wing venation because these are shared by other Coenagrionid damselflies.There are two antenodal cross veins and the M3 vein originates closer to the nodus than the arculus. 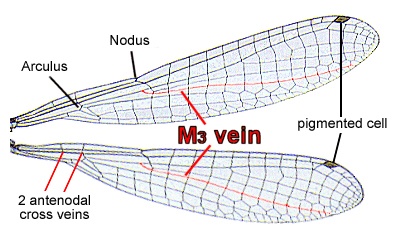 Traditionally, Odonate phylogenetics have been constructed using hypotheses based on interpretations of wing venation. However, there has been a shift towards molecular methods to determine Odonata phyologeny and evolution. Odonata comprises three taxons: Zygoptera, Anisoptera and Anisozygoptera. There were previously two dominant, competing phylogenies which disputed the monophyly of Zygoptera in which Pseudagrion microcephalum is found (Trueman and Rowe, 2009). Whichever phylogeny is used, it is generally agreed upon that the current use of Zygoptera to refer to all damselflies is an artificial, paraphyletic grouping which does not include all descendants of the last common ancestor.

However in recent works, several taxonomists have obtained Zygoptera as a monophyletic clade. Dumont et al. (2010) used nuclear ribosomal genes to elucidate Odonate phylogeny using Bayesian analysis. They presented a phylogenetic tree with Zygoptera and Epiprocta (Anisoptera and Epiophlebia, previously known as Anisozygoptera) as two monophyletic clades. This was based on nuclear ribosomal genes 5.8 S, 18S, and ITS1 and 2. In contrast to the trees presented by Trueman and Rowe (2009), Zygoptera is a monophyletic group whereas Anisoptera is a paraphyletic group. Coenagrionidae, where Pseudagrion microcephalum is nested, is highlighted in the diagram below. 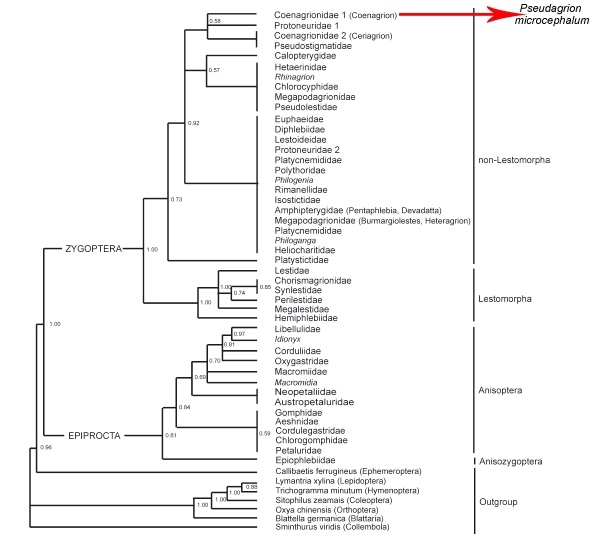 In Singapore, there are several references made to Odonates, mainly due to their beauty. In Gardens By the Bay, one can find the Dragonfly Lake, an artificial lake with aquatic plants which serve as habitats for Odonate larvae and adults.

To commemorate the opening of Dragonfly Lake at Gardens By the Bay, SingPost has released a stamp with a beautiful Odonate on it.

Another set of stamps featuring Odonates has also been released by the Singapore Post in 2011. Aptly titled "Pond Life", the two Odonate species featured are Rhodothemis rufa (Common Redbolt), an Anisopteran and Ceriagrion cerinorubellum (Ornate coraltail). These two species were chosen as representatives of the Odonata because they were key predators of mosquitoes and other insects, beautiful and commonly found (SingPost, 2011). 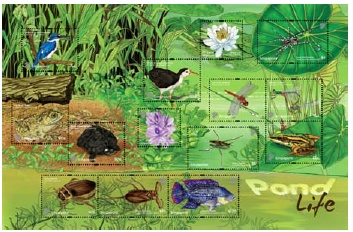 Hence in Singapore, Odonates widely recognised and appreciated as ecologically useful and aesthetically pleasing organisms which can be used for economic purposes. Ultimately, people enjoy looking at Odonates as their beauty appeals to people of all ages. The a fascination with Odonates is likely to inspire more plans to incorporate Odonates in landscapes and parks. This is no doubt a wonderful and optimistic future for Odonates in Singapore.

Any feedback or comments about the page can be directed to Shu Min at shumin_leo@hotmail.com.

This page was authored by Cheong Shu Min