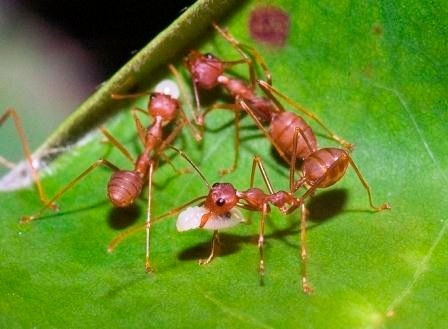 Oecophylla smaragdina is widespread in the Old World tropics and are present the most sophisticated nest-building activities of all weaver ants.The weaver ant (O. smaragdina) is a dominant canopy ant in tropical India and Australasia with colonies of up to 500 000 ants housed in nests made of leaves fastened together by larval silk and scattered across tens of trees. Workers draw leaves together, often forming long chains, and glue them together with larval silk. The colonies are very large and highly polydomous. Queens are pre-dominantly though not exclusively once-mated and colonies are usually single-queened, but most Northern Territory (Australia) colonies are polygynous. The workers are highly polymorphic (seen also in a fossilized colony), show complex polyethism, and present a much-studied rich pheromonal repertoire for the colony's tasks. Colony odor is partly learned, showing a "nasty neighbor" effect in reactions to other colonies of this highly territorial ant, and partly intrinsic to each individual. The odor varies over time and differs between the nests of a colony. Not surprisingly, Oecophylla ants are hosts to a variety of inquilines, such as spiders, which mimic the colony odor to escape detection. In addition, a constellation of Homoptera benefit from ant protection, yet the activities of the ants in controlling pest species make these ants beneficial insects (they are also human food in some areas) (adapted from Crozier et al., 2010). 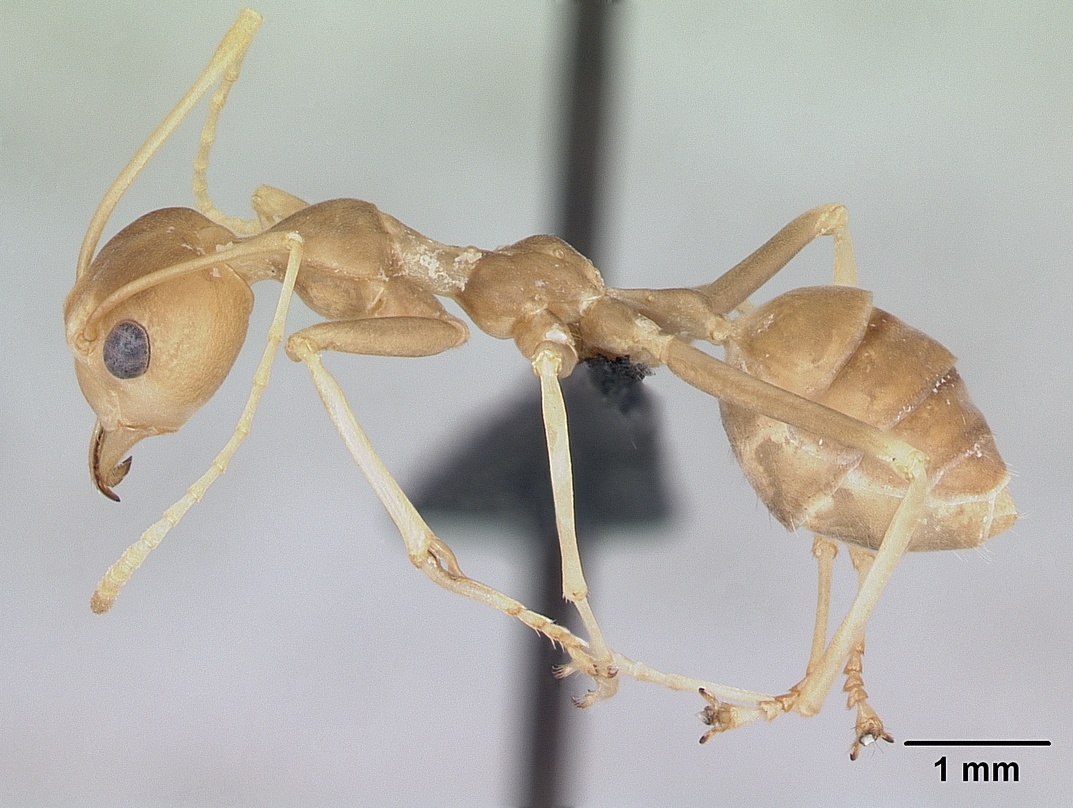 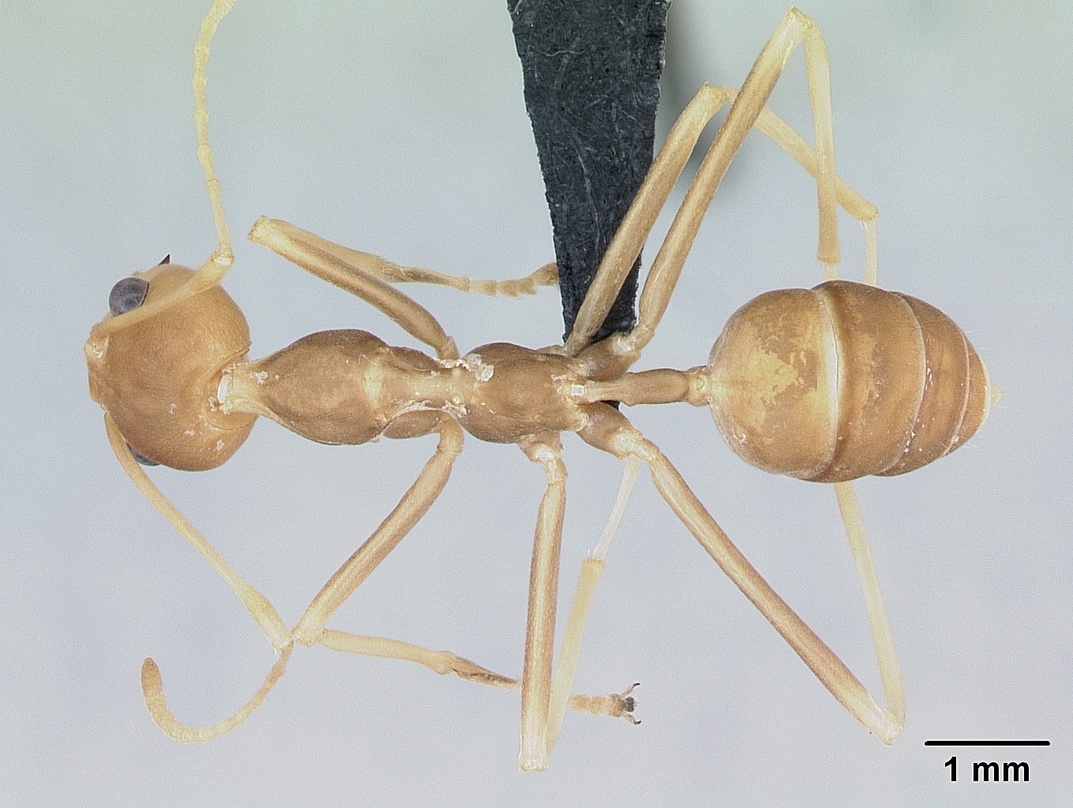 How the name is derived

The Asian Weaver Ant is widespread in disturbed areas and urban plantings, as they are able to construct their nests on many plants from trees, shrubs to tall grasses, and can control a vast area effectively. They occur in many parks as well, and can be a pest to humans that approach too close to their nests as they bite aggressively. Although not eaten in Singapore, many regional countries consider the weaver ant as part of their cuisine.

O. smaragdina does not sting but produces painful bites with its sharp and powerful mandibles, intensified by irritating secretions from the mandibular glands. It also releases formic acid from the gaster which can cause irritation to human skin (Chung, 1995). They maintain exclusive territories and monopolize large aggregations of different trophobionts.They kill a large range of arthropods for food, exhibiting highly organized aggressive predatory behavior combined with extensive foraging throughout the area occupied by a colony. More aggression is showed towards neighbours than strangers, exhibiting the "nasty neighbour effect".

Colonies in the Northern Territory, Australia, are the most variable due to polygyny and polyandry. Colonies in Queensland, Australia, are mostly monogynous, although often polyandrous and thus overall less variable. The population in Java, Indonesia, shows the least variation in colony genetic structure, because most colonies are both monogynous and monandrous (Schlüns et al., 2009). No information is available for mating patterns in Singapore at this moment as research has not been performed.

The major (large) workers perform the risky tasks outside the nest, while the minor (small) workers stay within the highly protected arboreal nest. Hence, this pronounced division of labour is associated with high differences in extrinsic mortality risks. Minor workers have a longer lifespan than major workers, despite their smaller size and presumably higher metabolic rate per unit of mass (Chapuisat and Keller, 2002).

Weaver ants are named for their method of nest construction. The nests are made of leaves folded or fastened together to form tight, tent-like compartments. The leaves are held in place by seams of silk spun by the larvae, which the major workers employ like shuttles for weaving the nests. This nest building is one of the most remarkable instances of social cooperation among lower animals. Once the weaver ants have chosen a tree branch suitable for a nest they spread out on the leaves of the branch and begin to pull on the tips and edges. When an ant succeeds in turning up a segment of a leaf, nearby workers are attracted to that part of the leaf. and soon there is a small group of ants pulling in unison.When a leaf is broader than the length of an ant's body. or when two leaves must be pulled together across a wide space. the workers form living bridges between the points to be joined. Then some of the ants in the chain climb onto the backs of their neighbors and pull backward, thus shortening the chain and bringing the leaf edges together. When the leaves have been maneuvered into shape, some of the ants remain on them, employing their legs and mandibles to hold the leaves in place. Other ants go back to already established nests and return to the new site carrying partly grown larvae. The workers wave the larvae back and forth across the leaf seams. This causes the larvae to release threads of silk from gland openings located just below their mouth. Thousands of these threads woven into sheets are strong enough to hold the leaves in place. Sheets of silk are also spun to make circular entrances and outer galleries leading to the interior of the new nest (Hölldober and Wilson, 1977).

In a colony in which odour cues are shared among workers, each worker may be described in terms of both an innate odour and an expressed odour. The innate odour is that which the individual would express if kept in isolation from the colony, and which presumably has a genetic basis. The expressed odour is the odour that results from the mixing of cues among workers via trophollaxis and allo-grooming and, depending upon the efficiency with which odour is shared, will be similar for all workers. This odour may also be influenced by environmental factors such as diet and nest substrate. In colonies with low genetic diversity, it maybe possible for a zone of tolerance to encompass the few odour phenotypes that exist within the colony, without greatly increasing the probability of mistaking a non-nestmate for a nestmate (Type II error). The sharing of recognition cues among workers again reduces the number of phenotypes within the colony, potentially to a single phenotype. This is an explanation for why the level of aggression expressed by a colony decreases as the diversity within the colony increases, even when odour is well-mixed (Newey, 2011). 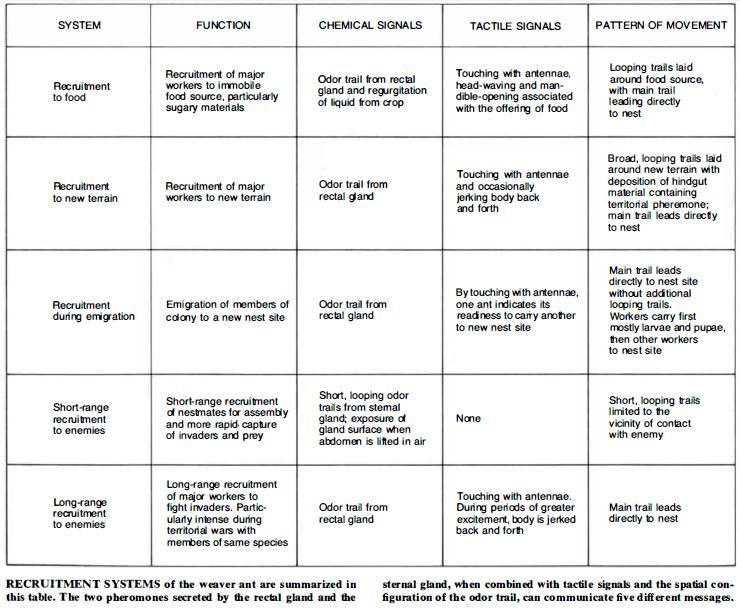 Associations with other animals

One of the most closely studied relationships is with the predatory spider, Cosmophasis bitaeniata, which is both a visual and a chemical mimic of the ant. This salticid spider feeds on the ant larvae and appears to be quite comfortable inside ant nests, although it tends to avoid direct contact with major workers (Allan and Elgar, 2001). The larvae of many lycaenid butterflies secrete ant-appeasement substances or attractants, as well as sugary food solutions, from epidermal glands. These enable them to live within the protection of ant nests. Weaver ants also derive food from a range of other insect species that excrete solutions rich in sugars, amino acids and other nutrients (Crozier et al., 2010).

(Azuma et al. 2006 "Maps of Europe, Africa, and Asia (a) and Southeast Asia (b) showing collection sites. Numbers correspond to locality codes given in Table1. The current distribution areas of Oecophylla longinoda (Africa) and O. smaragdina (Asia and Oceania) are enclosed by a solid line in (a)" Map. Jan 2005. URL:http://www.springerlink.com/content/m0hl5856vl15j725/(accessed on 26 Oct 2011).

Other names that have been given

How to tell this species from others

The first description of this species published

Worker medium-sized, slender, slightly polymorphic. Head rather large, broader behind than in front, with rounded sides and posterior corners and semicircularly excised occipital border, very convex above. Eyes large, convex, broadly elliptical, situated in front of the middle of the head. Ocelli absent. Palpi very short, maxillary pair 5-jointed, labial pair 4-jointed. Mandibles long and large, triangular, with nearly straight lateral borders, a very long curved apical tooth and numerous short denticles along the straight apical border. Clypeus very large and convex, but not distinctly carinate, its anterior border entire or very feebly sinuate in the middle, depressed and projecting over the bases of the mandibles. Frontal area rather large, subtriangular; frontal carinae moderately long, subparallel. Antennae very long, 12-jointed, the scapes inserted some distance from the posterior corners of the clypeus, rather abruptly incrassated at heir tips; the first funicular joint very long and slender, longer than the second and third together, joints 2 to 5 much shorter, subequal, slender, the remaining joints except the last, shorter and distinctly thicker. Thorax long and narrow; pronotum longer than broad, evenly convex above, narrowed and colliform anteriorly; mesonotum anteriorly long and constricted, subcylindrical, suddenly broadened behind where it joins the small, short, unarmed epinotum, which is rounded and convex above and without distinct base and declivity. Petiole long and slender, much longer than bioad, subcylindrical, with a very low rounded node near its posterior end, its ventral surface near the middle more or less convex, its posterior border on each side with a small rounded, projecting lamella, appearing like an acute tooth when the segment is viewed from above. Gaster short, broadly elliptical, its first segment suddenly contracted to the petiole, the tip rather pointed. Legs very long and slender; claws, pulvilli, and last tarsal joint enlarged. Gizzard with long slender sepals, which are not reflected at their anterior ends (Wheeler, 1922).

First specimens from which original descriptions of the species were made, with storage location.

Where the type specimens were collected from

Notes:Groups interested in participating in the LinkOut program should visit the LinkOut home page.A list of our current non-bibliographic LinkOut providers can be found here.To see LinkOut links in this lineage click hereInformation from sequence entries

Disclaimer: The NCBI taxonomy database is not an authoritative source for nomenclature or classification - please consult the relevant scientific literature for the most reliable information.Comments and questions to info@ncbi.nlm.nih.gov

This page was authored by Lim Chong Jin, Reuben