Having a popular local Singapore dessert - Ice Kachang or Chendol - and you wonder what is thatoval, sweet and translucent white jelly?It is 'attap chee', which means 'attap seed', that comes from the Nipah palm.

How does it live?

Where can it be found?

Nypa fruticans is native to South and Southeast Asia, northern Australia and Pacific Islands. It is common in the estuaries and coasts of Indian and Pacific oceans.[1][3]

Apart from its natural range, the Nipah palm can also be found in West Africa following its introduction in 1906 from the Singapore Botanic Gardens, and have subsequently been found in Panama and Trinidad as well.[1]

The Nipah palm can be found mostly in the Northern coasts of mainland and also on a few offshore islands in the Northeastern and South of Singapore. The map below shows the locations where Nipah populations are found. Although it may seem that the Nipah palms are mostly situated away from the urban city centre, they are still at risk of local extinction if threatened (see Conservation & Management below). 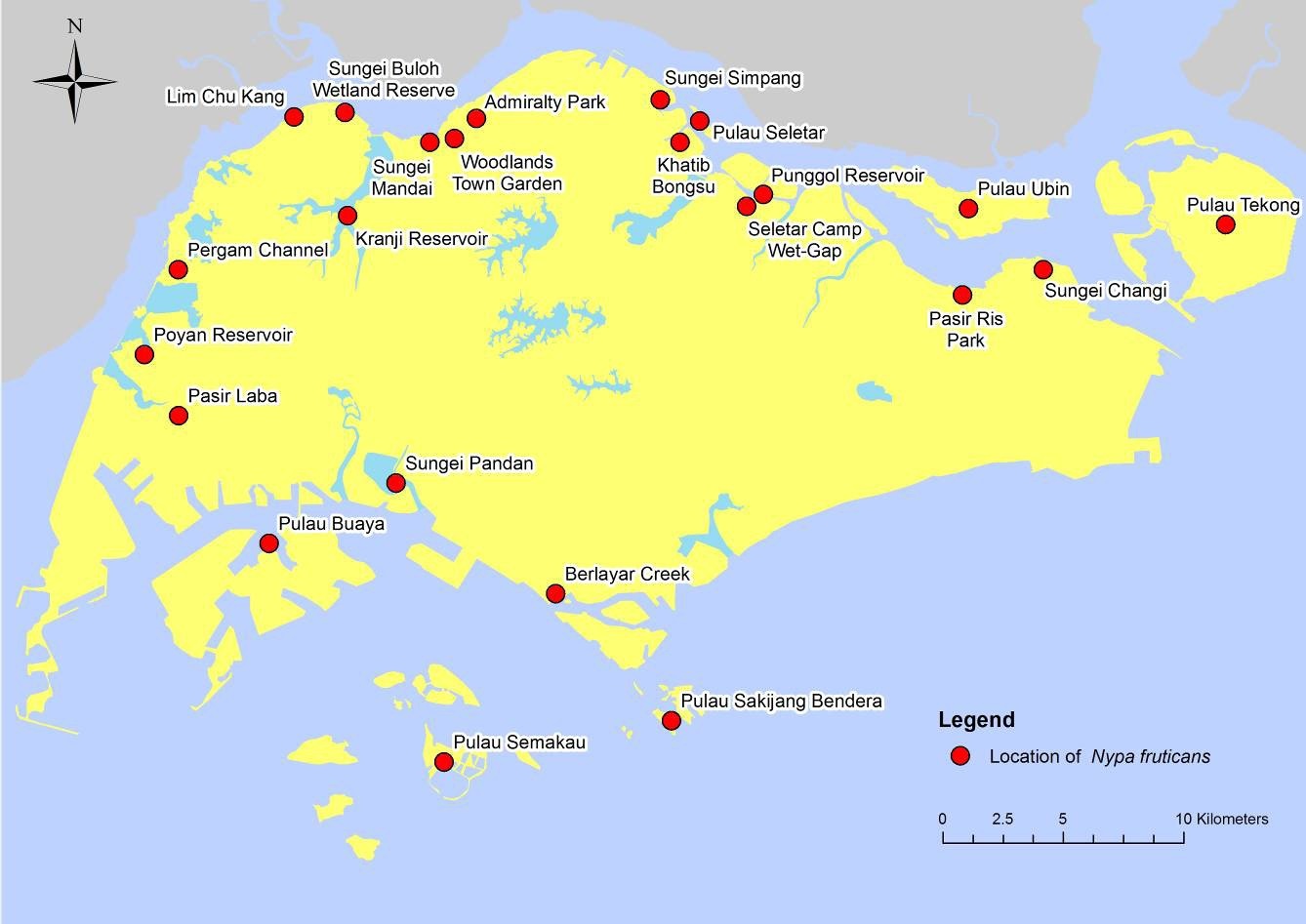 How to identify a Nipah palm?

Type Information
The Nypa fruticans holotype specimen can be found at the US National Herbarium (barcode 00016972).
One may refer to this model specimen to confirm the identity of the Nipah palm.

Why is this plant so important to us?

The Nipah palm is one of the most heavily utilised mangrove species in the world! Have you come across these uses [5] before?

OthersPig feedThe Nipah sap is fed to pigs in some islands of Indonesia, as it is known to make the pork meat taste sweeter. [3]

The Nipah palms' unique horizontal rhizomes growing underground can help to stabilize coastal areas and river banks, this protecting the land-water margins from erosion by oncoming water and waves. Similar to mangroves, Nipah palms growing along the coastlines act as buffer regions, absorbing the impact of oncoming waves or storms and strong winds.[7] In fact, they are important components of land progression (coastline extension) as they retain silt and sediments[7] deposited by the surrounding waters.

Habitat for other organisms

The Nipah palm population is home to a community of organisms. These includes the African mud crab (Panopeus africanus), stone crab (Menhippe nodifrons), mangrove oyster (Crassostrea gasar)[8], and the edible mud mussels (Geloina coaxans)[3]. The Nipah mangrove areas are also important hiding and spawning grounds for many other marine organisms.

All in all, the Nipah mangroves contributes to increased species richness through habitat heterogeneity.[9] Maintaining species richness is especially important in Singapore since it is a biodiversity hotspot. 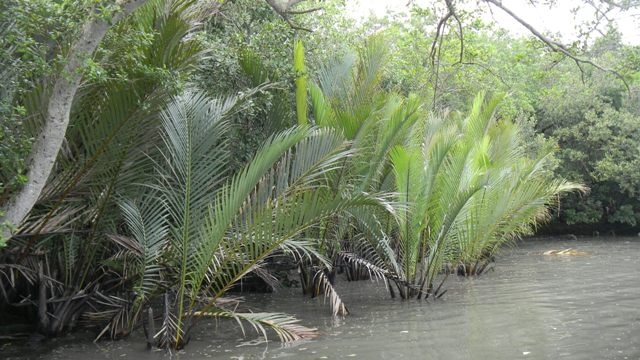 Nipah palms along the coast act as buffer against strong waves and stabilize the shoreline. Photo © Erika I. Halim

What can we do to protect this treasure?

Since Singapore's independence in 1965, rapid urbanization have caused the loss of as much as 90% of the original mangrove-covered area.[9] As such it is crucial that we protect the mangroves of this sunny island. One of such mangrove species, the Nipah palm is a native plant species in Singapore. Recently it has been classified as nationally endangered in Singapore.

In Singapore, the main threat to the Nipah palm populations today is habitat loss or destruction.[1] This is due to land reclamation, land use change such as making way for the construction of housing estates and even for waste disposal sites as in Pulau Semakau, or the creation of artificial seawalls to stabilize coastlines. Pollution from organic wastes or oil from shipyards and petroleum-based industries, especially in Singapore where it is a petro-chemical hub, is also a serious problem.[7]

Protected nature reservesNipah palm populations at the Sungei Buloh Nature Reserve, Pulau Ubin (offshore rural recreation spot) and Pulau Tekong (military training grounds) are protected, although reclamation activities are currently ongoing in Pulau Tekong and this may have adverse effects on the Nipah palm populations there. On the other hand, the wild populations in various parks across Singapore such as Admilralty Park and Pasir Ris Park are relatively safe from future human developments. In addition, there have also been plans to gazette the Berlayar Creek and Lim Chu Kang mangrove regions as protected areas in the near future[1] -- this is good news for our Nipah palms!

ReplantingThe Nipah palm has been successfully cultivated in freshwater at Singapore Botanic Gardens' Eco-Lake[1], suggesting its replanting suitability. In other regions such as Malaysia, Nipah palm seedlings have proven to thrive well after replanting along river banks[10]. Following the pressing threats to Singapore's Nipah populations, we can look into replanting them in other areas safe from habitat alterations.

Individual responsibilityIn Singapore, every resident is encouraged to be responsible for their own environment. No action is too small to make a difference on our planet.So here are two simple tips for protecting our mangroves:Remember, without the Nipah palm, we will not have that sweet, translucent white jelly in our Ice Kachang anymore!

Other online pages on the Nipah palm can be found at these links:http://www.wildsingapore.com/wildfacts/plants/mangrove/nypa/nypa.htmhttp://www.naturia.per.sg/buloh/plants/palm_nipah.htmhttp://mangrove.nus.edu.sg/guidebooks/text/1068.htm

This page was authored by Erika I. Halim