You think that it’s an ant? Look again!

It’s an ant-mimicking spider! It is commonly known as

Impress others by using its scientific name:

Resemblance of a spider to an ant

A typical spider has two segmented body – the abdomen and cephalothorax. For Myrmarachne plataleoides, their abdomens are as long as their cephalothorax. Together with a 'waist', they look like they have a three-segmented body look similar to a typical ant look (Mclver & Stonedahl, 1993). It also has black pigments at the sides of the heads to resemble the larger eyes of the ants (Maderspacher, 2011).To reinforce their mimicry, they wave their first pair of legs in the air while moving so as to portray an “antennal illusion” (Mathew 1954; Edmunds, 1978; Jackson 1986).

Now it is your turn to spot the differences! How many can you spot?
Answer: There are four differences in this picture! Did you spot them all? Click here for the answers!

Purpose of mimicking an ant

Myrmarachne plataleoides are batesian mimics of Weaver ant (Oecophylla smaragdina) which are known to be aggressive, give painful bites and attack together (Holldobler & Wilson 1990). Batesian mimics mean that harmless mimics (Myrmarachne plateleoides) look like their unpalatable models (Weaver ant) (Edmunds 1972, 1993; Cushing 1997). With the combination of both behavioural and morphological mimicry, they deceive potential araneophagic (spider-eating) predators and gain protection (Edmunds 1993; Nelson et al. 2004; Nelson et al. 2005).
Although they live close to their hostile ant model – weaver ants and mimic ants, this close association can be life-threatening for them. Hence they will avoid ants upon sighting and keep a safe distance from them. They would either get out of the ant pathway, jump away or simply not get onto the same leaves as the weaver ants. This also means that ants are NOT their food!

These weaver ants are working together to tear down the nest of a Myrmarachne plataleoides.

Note: If you have juvenile photos of Myrmarachne plataleoides and would like to contribute to this fascinating fact of juveniles by sharing your photos, please feel free to contact me! You can also contact me if you have even better suggestions of which ant species the juveniles look like.

As invertebrates (organisms without backbone), they only have exoskeletons which act like their armours. Every time when they grow larger in size, they have to moult by getting out of their old exoskeletons and new exoskeletons will form just beneath the old ones. It is just like how we have to change new clothes each time we grow bigger in size! During moulting, they are at their most vulnerable states and would stay in their nests throughout the whole progress. Right after they moult, their new exoskeletons would still be soft and time is required before their new exoskeletons harden.


Myrmarachne plataleoides struggled out of its exoskeleton. It took about half an hour before it reached the last stage.

Their sexes could only be determined when they are sexually matured adults.
By chelicerae

Spiders' jaws located in front of the cephalothorax. They are tipped with fangs and muscles to hold their prey in place.
The males have enlarged and elongated chelicerae of about five times longer than those of females. This can increase the male’s length by 50-70% (Pollard, 1994). Due to their elongated chelicerae, they resemble weaver ants less. In addition, the tips of their chelicerae have a black spot which has been suggested that they look like ants’ eyes so the males actually mimic worker weaver ant carrying a dead ant (Mclver & Stonedahl, 1993).

Some examples of Myrmarachne species found in Singapore. For Myrmarachne plataleoides, it is easier to identify them due to their colour and their close association with weaver ants.

Cohabitation of female and male 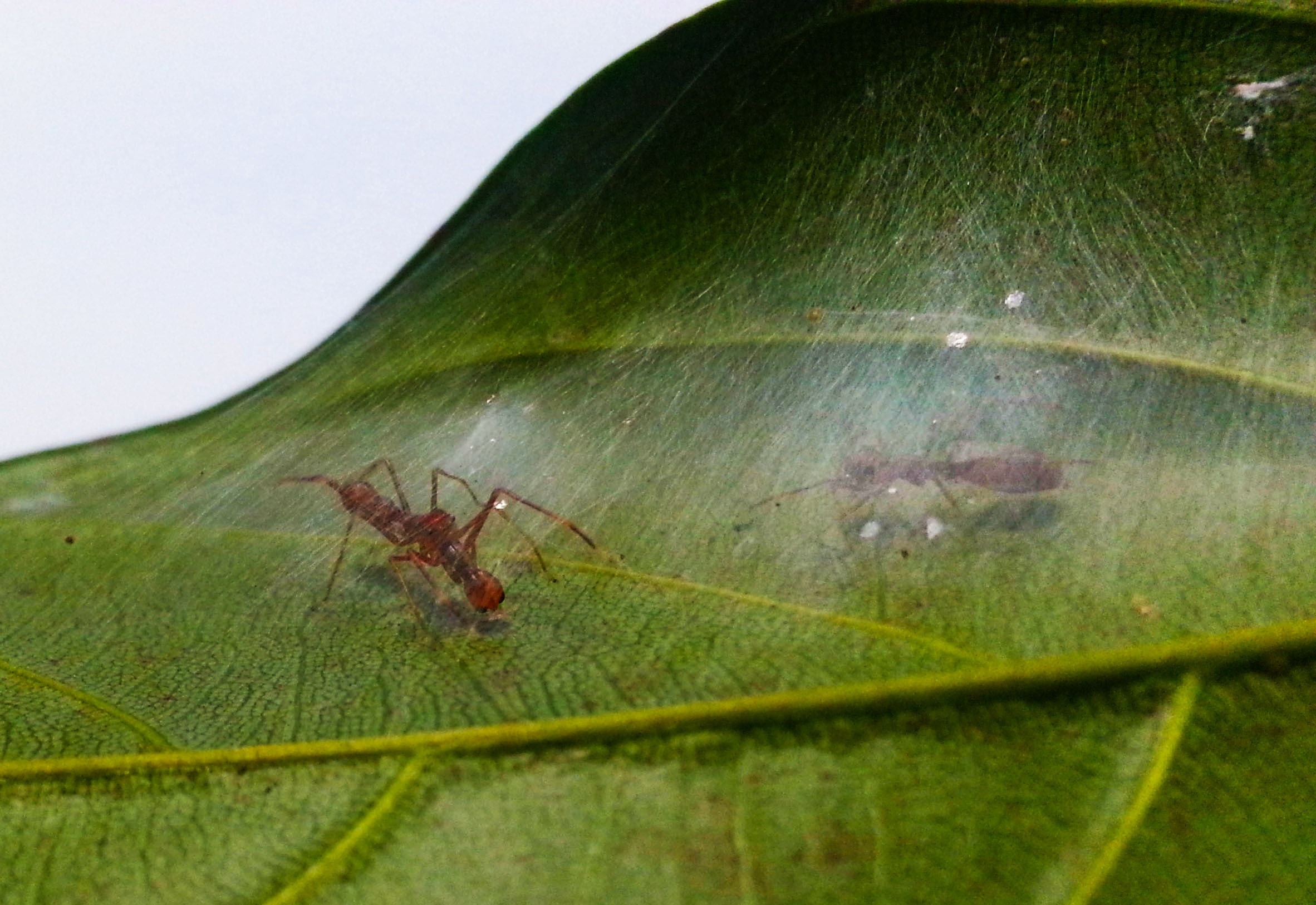 Male kerengga ant-like jumper (on the left) cohabiting with female (on the right). (Photo taken by Wan Ting)

Courtship away from the nest

This is the funnier version:


This version explains what the male jumping spider is doing exactly during his zigzag dance which we cannot see with our naked eyes. Hence watch to understand the mechanism behind the display from PBS.org at:
http://www.pbs.org/wnet/nature/video/what-males-will-do-video-spider-courtship-dance/956/

Mating occurs when the palps of the male applies to the epigyne of the female. When this happens, the male is always beside the female and orientated 180 degree to each other. Sometimes, the male will alternate different sides of his palps by freeing from her and moving to the other side of her. The females will remain stationary when the males apply their palps (Jackson, 1982).

Unlike other jumping spiders which fight using their first pair of legs, male Myrmarachne plataleoides are able to fight with each other using their enlarged chelicerae.Two male ant-mimic spiders wrestling! They can be really fierce.

The female will weave dense opaque nest over her nest first followed by another layer over herself. She will lay about 18 eggs which can be yellow or orange in colour. She will then continue to stay in the nest until the eggs hatch into spiderlings and come out occasionally to hunt. Upon hatching, the spiderlings will to continue to stay in the nest for a week or so to develop until they are ready to leave! As they are really tiny, they will feed on nectar and they can actually weave really tiny nest over themselves too!

Do you know?
Some females can lay eggs for the second time after her 'old' eggs have hatched into spiderlings.

They can be found on shrubs or tree trunks (example: Jackfruit trees or Palm trees) at the forest edges or at the parks. Usually when you see weaver ants, you can try to look out for them too.

Note: If you know of any other places which Myrmarachne plataleoides, please feel free to let me know and show me a picture of it if possible.

Due to the modified chelicerae in male Myrmarachne plataleoides, their fang ducts have been lost and they cannot immobilize prey with venom. Furthermore, they cannot insert fangs into prey as soon as they land on them. As a result, large and moving prey can escape from males more easily than females (Jackson, 1986). 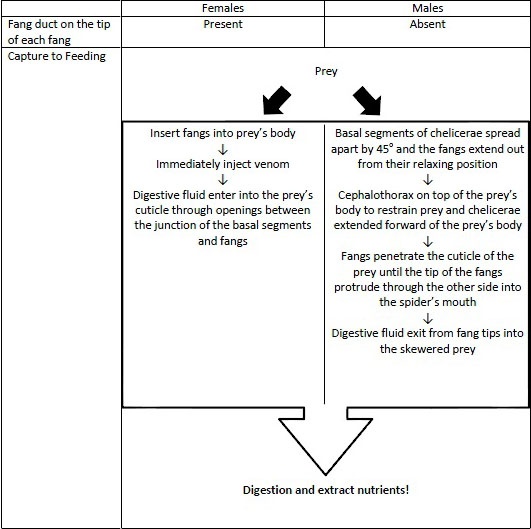 They get eaten by araneophagic (spider-eating) predators such as ants, mantises and even salticids (Nelson et al., 2006).Do you know?Unfortunately, sometimes their mimicry also managed to fool mymecophagic (ant-eating) spiders that they are ants. Hence these mymecophagic salticids which mistaken them as ants would eat them too. However, if they manage to fully extend their forelegs 45 degrees to the side and elevate their legs at 45 degrees (also known as the erect-legs posture (Jackson, 1982)) to show ant-eating spiders that they are not ants in time, they can escape (Nelson et al., 2006).Example of a mymecophagic (ant-eating) spider. This is also known as the ant-mimic crab spider: 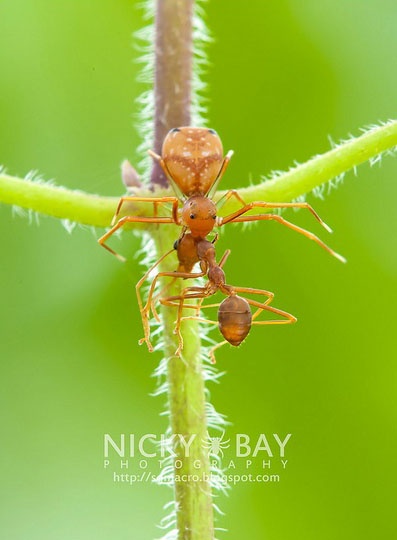 Myrmarachne plataleoides (Pickard-Cambridge O., 1869) is an accepted name. (Catalogue of life)Extra knowledge: The meaning of parentheses in the scientific names1. In 1869, Pickard-Cambridge who first discovered and described Myrmarachne plataleoides as Salticus plataleoides2. After some time, it was discovered that it actually belongs to the genus group - Myrmarachne3. According to Nomenclature rules (ICZN), the first author who described it has his name enclosed in parentheses to show that the species has transferred generic group.

The table refers to taxonomic ranks for biological classification. Down the column, organisms are grouped together based on increasing similarities (within themselves) and differences from other groups of organisms (based on DNA sequences, morphology and more). However, these groups are not fixed/subjective and the organism can be transferred from one group to another group within the same rank (for example, genus Salticus to Myrmarachne) when taxonomic revision is done. These ranks provide a quick and rough idea on what kind of characteristics an organism has.

Extra knowledge by watching the video to have better understanding of arthropoda:

Brief notes from the video:Phylum ArthropodaClass ArachnidaFamily Salticidae (Jumping spiders)Eyes
3. The other three pairs of eyes are known as secondary eyes which are extremely sensitive to motion. These eyes can potentially enable the spider to see 360 degrees (Jackson & Pollard, 1996).A documentary about the different groups of spiders on Earth. Start at 26:30 to learn more about Jumping spiders.Note: If you have time, you can watch the whole documentary as it is really informative.Interesting response of Jumping spiders' eyes to green/red light:

Myrmarachne species have variable and unique development of the spermathecae and attached ducts which may be exclusive to them only in the Salticidae family. All the species have a basic distinctive epigyne shape with a sclerotized, elongate spermathecal complex (consisting of the anteriorly placed spermathecae with sclerotized ducts extending posteriorly) connected by membranous ducts to the copulatory openings. Although the male palps can be used as a diagnostic feature, they are not as distinctive as the spermathecal complex of female epigyne..Unfortunately, Myrmarachne genus is poorly supported in the phylogenetic analysis and species group cannot be determined accurately. This may be due to:

Bocus may actually be a different genus that has a possible recipient of species of Myrmarachne and is part of the phylogenetic analysis of the Myrmarachne in the following phylogenetic tree. Hence by synonymizing Bocus with Myrmarachne, Myrmarachne will become a bigger genus than it should be (Edwards, 2013).

Spermathecal complex = epigyne = sexual organ in the females for male pedipalp to enter (shown in the pictures above and below).

Extra knowledge: Phylogenetic tree is a branching diagram which shows the evolutionary relationships between the species based on similarities or differences in their characters (genetic, morphology etc).

Most parsimonious phylogenetic tree of Myrmarachne (With courtesy of Edward & Benjamin, 2009)

The last two clades are sister groups.Myrmarachne plataleoides is always paired with Bocus excelsus in the phylogenetic tree means that both of these species are very likely to evolve from the same most recent common ancestor. 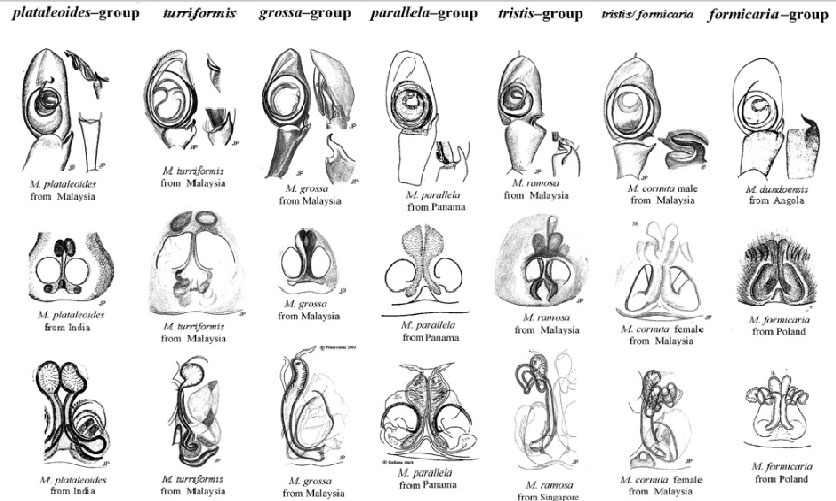 "Plataleoides group is in the 'Australasian clade' and are diagnosed in females by a very narrow spermathecal complex terminating in front of the atria and small oval spermathecae. In male Myrmarachne plataleoides, the initial coil of the embolus is distinctively shorter and broad in the proximal half of the bulbus, with an even shorter elevated terminal coil, which gives the embolus a cork-screw appearance. The embolus tip is recurved and truncate, unique to this species." adapted from Edwards & Benjamin, 2009.

Sunny JosephWithout their photos, this webpage will be very plain and understanding of Myrmarachne plataleoides will be less comprehensive. In addition, you can click on their names to view more of their photos.I hope that this webpage gives you an introduction to the fascinating world of Ant-mimic spiders and allow you to view weaver ants with a different light next time since you know that Myrmarachne plataleoides may be among them. You can start spotting them!

Author of this webpage:

This page was authored by Sim Wan Ting