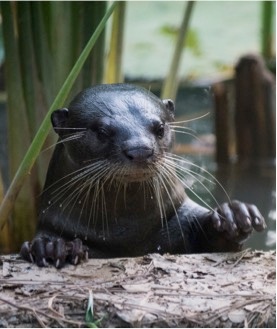 Owing its name to its short, sleek fur, smooth-coated otters are one of the two otter species found in Singapore (the other being Aonyx cinerea). Though Singapore's landscape has rapidly urbanised over the past 50 years, the highly adaptable smooth-coated otter continues to exist and perhaps even thrive here, as sightings of it have increased over the last decade 1  2 . Previously, smooth-coated otters were mostly sighted in the mangroves, mudflats and coastal areas such as Sungei Buloh Wetland Reserve, Pasir Ris, Pulau Ubin, and Changi 3 . Though, more recently, these delightful otters have begun to make use of our urban waterways, and can commonly be spotted in parks and reservoirs as well. Contrary to what some might believe, none of the wild otters in Singapore were zoo releases. Rather, they are believed to have come from Malaysia, driven across the straits by the coastal development works in Johor.

The original scientific name of the smooth-coated otter, or a synonym of Lutrogale perspicillata, is Lutra perspicillata. Lutra originates from udréh, a Proto-Indo-European (reconstructed prehistoric language of Eurasia) word relating to the idea of "water" 4 . While the source of the initial-l is unclear and unspecified, some have guessed at its connection to lupus (Latin for "wolf"), portraying otters as "water wolves", or lūdō(Latin for "play"), suggesting at the otters' playfulness 4 . Perspicillata means "conspicuous" in Latin. The choice of terms, given by Geoffroy Saint-Hilaire, were not explained 5 .

They are one of the larger otter species, growing up to 1.2m from the head to the tip of the tail and usually weighing around 7 to 11kg 6 . The colour varies from dark to reddish brown, with the belly slightly paler and the throat, side of neck, cheeks, and upper lip whitish or gray 7 . Its eyes and ears are small while its limbs are short and strong 7 . The fur of the smooth-coated otter is very short, growing up to only 12mm in length, thus giving it the smooth and sleek look to which it owes its common name 8 .

Like most other otters, the smooth-coated otter has webbed feet and adept paws 9 . 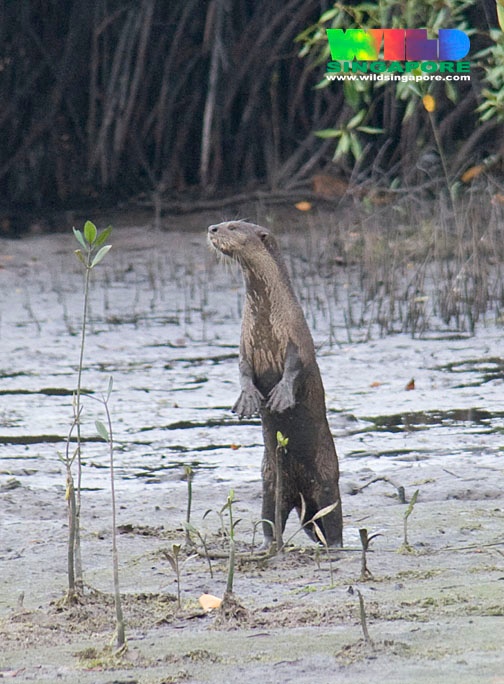 However, there are certain characteristics of the smooth-coated otter that sets it apart from all other otters. Its bigger and rounder head and flat tail are some of the clear traits differentiating smooth-coated otters from common otters (Lutra lutra) 7 . 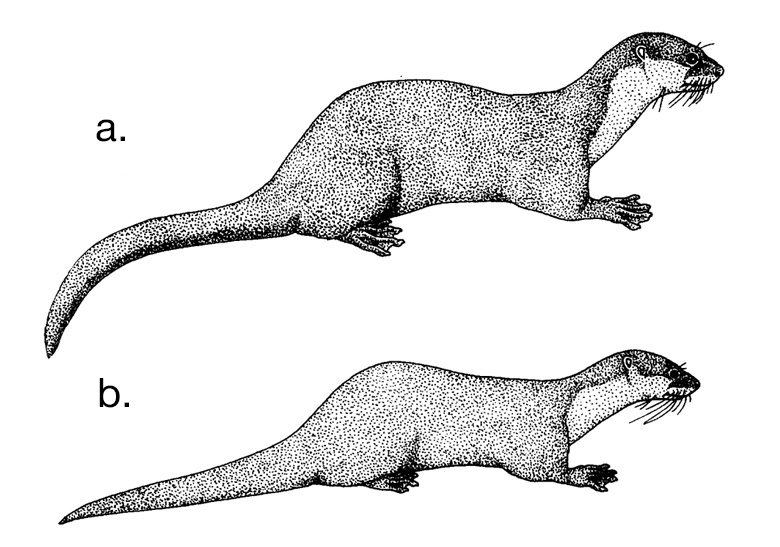 The hairless nose of the smooth-coated otter also almost immediately sets it apart from the hairy-nosed otter (Lutra sumatrana) 7 . It also differs from the Asian small-clawed otter (Aoyx cinerea) by having well developed sharp claws on its front feet 11 7 . 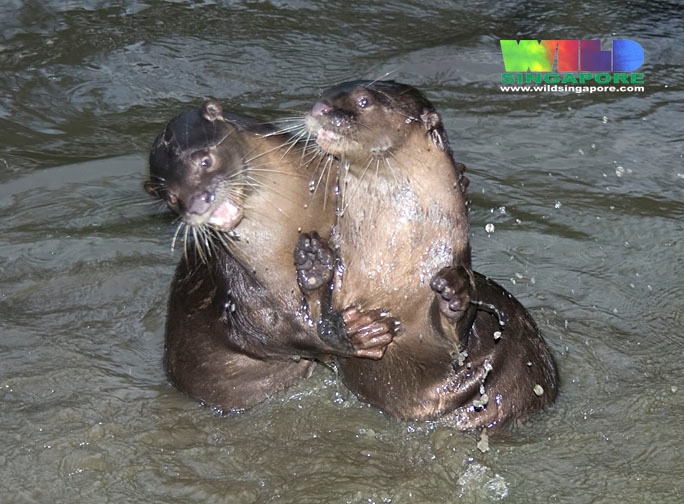 Two smooth-coated otters playing, where the sharp claws on the right front foot of the otter on the left is can clearly be seen. At the same time, throat, side of neck, cheeks, and upper lip are visibly paler than the rest of the body as well.Photo by Ria Tan, used with permission.

The bulk of the smooth-coated otter's diet (>75%) is made up of fish such as tilapia and catfish 12 . They sometimes hunt in groups of up to 11, herding the fishes together for easy capture 13 12 . Though, being highly adaptable, these otters are able to rely on other food sources such as frogs, insects, crabs, other smaller mammals such as rats, and even snakes 14 15 . 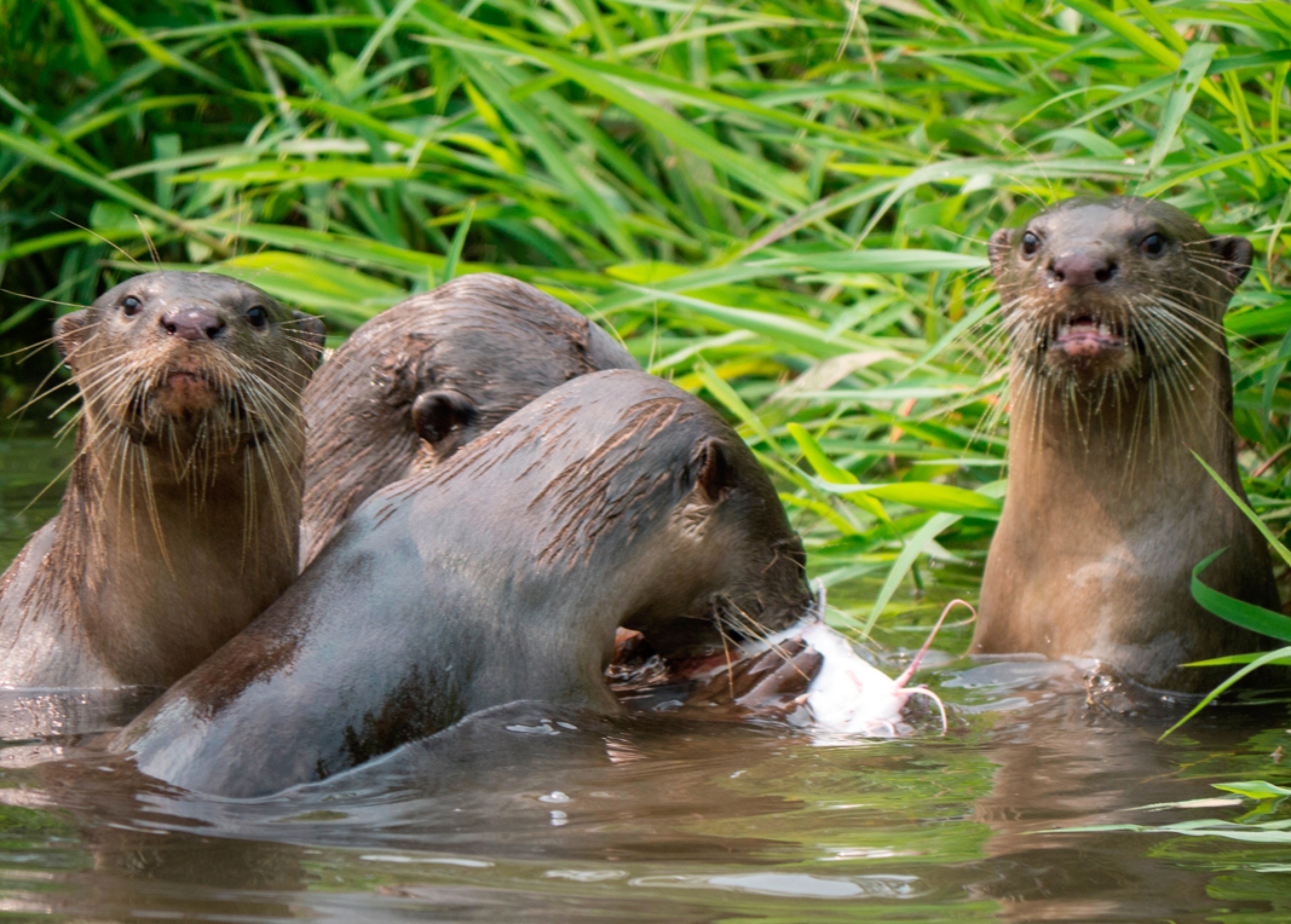 A pack of otters feeding on fish. Photo by Max Khoo, used with permission.

Even though wild smooth-coated otters are naturally carnivores, captive otters such as those in zoos will eat nuts and raisins if given those as well 16 .

As Singapore experiences summer all year long, the activity pattern of the local otters have been found to be bimodal and diurnal, with peak activity occurring in the morning and evening 18 . Most of the smooth-coated otter's time is spent travelling and foraging, while other activities throughout the day include grooming, social activities, digging, and sprainting 18 .

Unlike other otter species which might live in big groups of up to 100, smooth-coated otters form small family groups consisting of the mating pair and their pups, if present 19 . 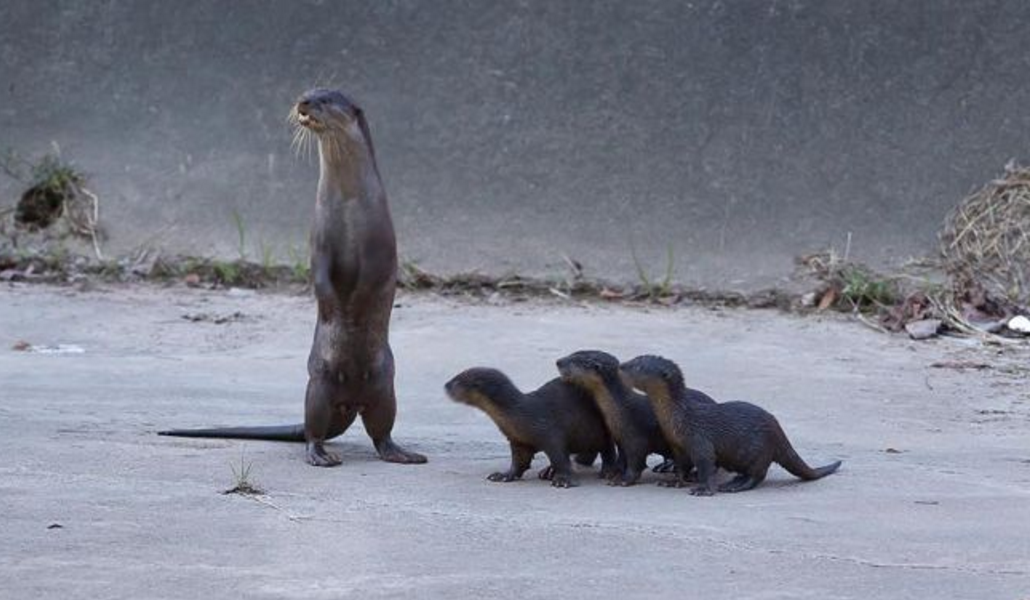 A mother otter and her three pups - the resident family at Bishan-Ang Mo Kio Park, Singapore.Photo by Shirley Ng, story posted on Facebook by NParks.

The gestation period for smooth-coated otters is approximately 63 days 24 . During this period and right after giving birth, the female is usually very aggressive and will fiercely protect her pups 25 . Thus, though baby otters look extremely adorable, be careful not to approach suddenly or get too close to the otters or you risk facing the wrath of the mother otter.

Pup litters usually range from 2-5 and both parents will raise the pups together in a holt usually near the water 21 . Pups, usually born blind and helpless, will stay with their parents for up to a year, during which their parents will teach them to swim and forage, among other things 19 21 . The average smooth-coated otter usually lives up to 10 years of age 26 . 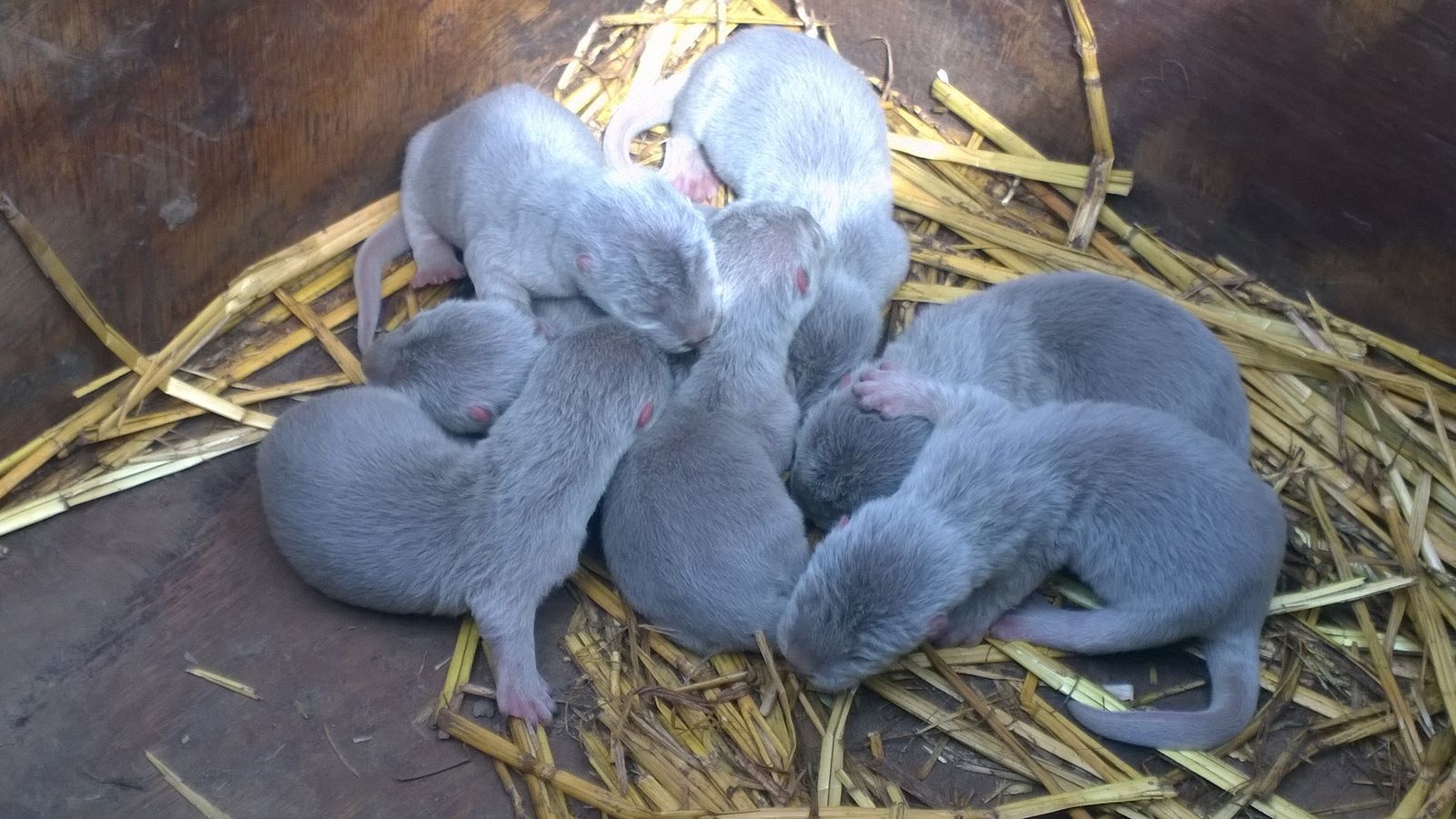 A litter of smooth-coated otter pups. Photo from WikiCommons.

Widely distributed in south and southeast Asia, the smooth-coated otter can be found in a continuous range stretching from Indonesia to southern China, and then westwards to India and Pakistan 22 . There is also an isolated population of smooth-coated otters in Iraq, suggesting that its geographic range might have once been wider than it is today 27 . It is unknown exactly how many individuals are left in the wild. 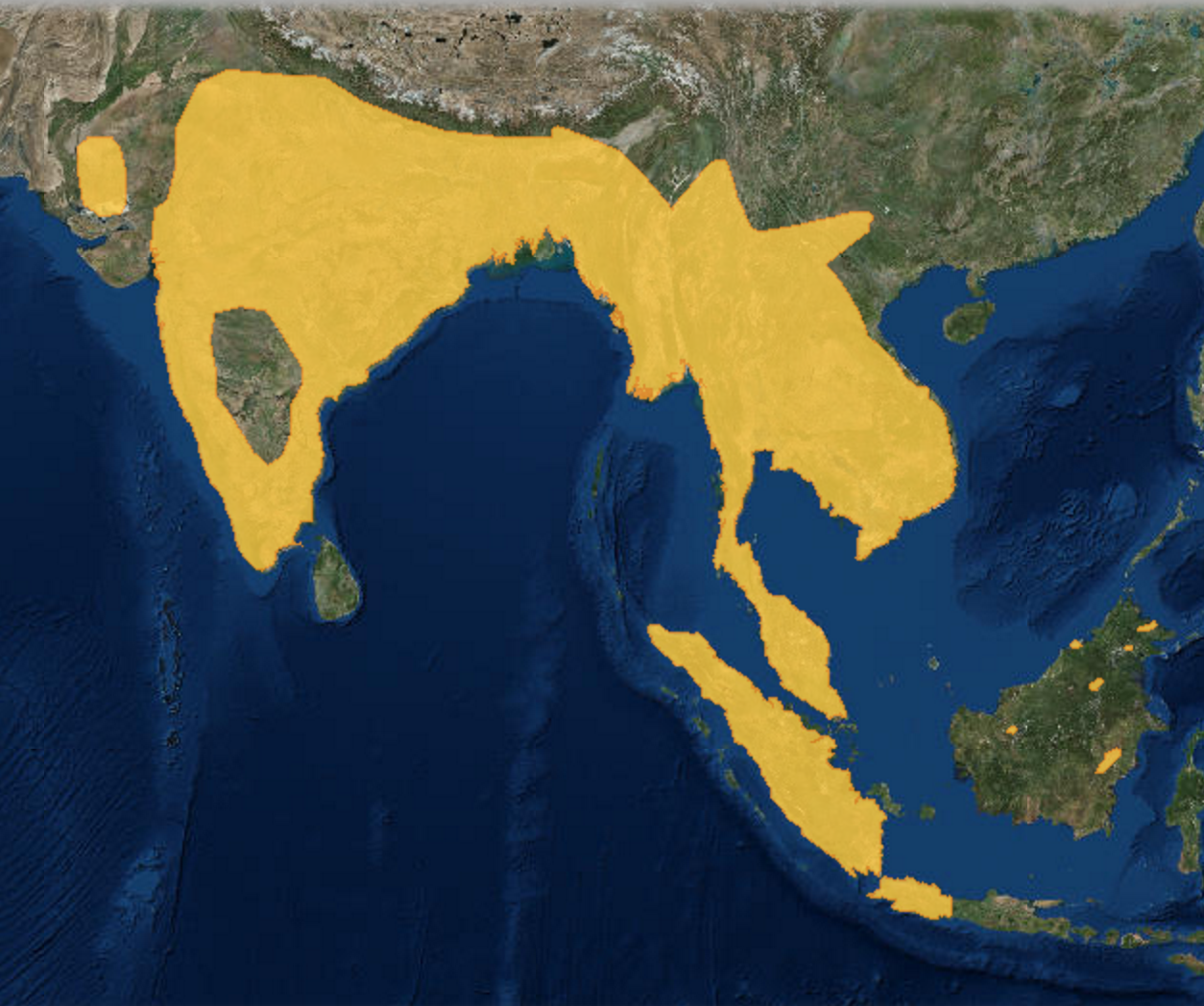 Global distribution of smooth-coated otters in south and southeast Asia. Photo by IUCN.

The first sighting of a smooth-coated otter in Singapore was in 1938, a male at Lazarus Island 28 . After which, there was a long period of absence during which it was thought to have become extinct in Singapore. It was suggested that the local population of smooth-coated otters were not residents as they could easily travel between Singapore and Johor 29 . However, a second recorded sighting took place more than half a century later, at Sungei Buloh Wetland Reserve in 1990 30 . Ever since, the sightings have been increasing in both number and range, with smooth-coated otters not just spotted at Sungei Buloh, but also places like Pasir Ris, Changi and Tanah Merah 30 31 . Recently, two smooth-coated otter families have even made Bishan-AMK Park and Marina Reservoir their home 18 32  33 . Watch the video below to follow the story of the otter family at the Bishan-AMK Park.

Smooth-coated otters are semi-aquatic and require both terrestrial and aquatic habitats to survive 12 . Having a water body is essential for feeding and swimming, which otters enjoy immensely 15 . On the other hand, their holt (or den) and territorial spraint sites are on land, usually near or beside the water body. As such, smooth-coated otters can commonly be found where water bodies meet land, such as mangroves, mudflats and coastal areas 34 . While they are able to swim in the sea, smooth-coated otters primarily require fresh water 7 . 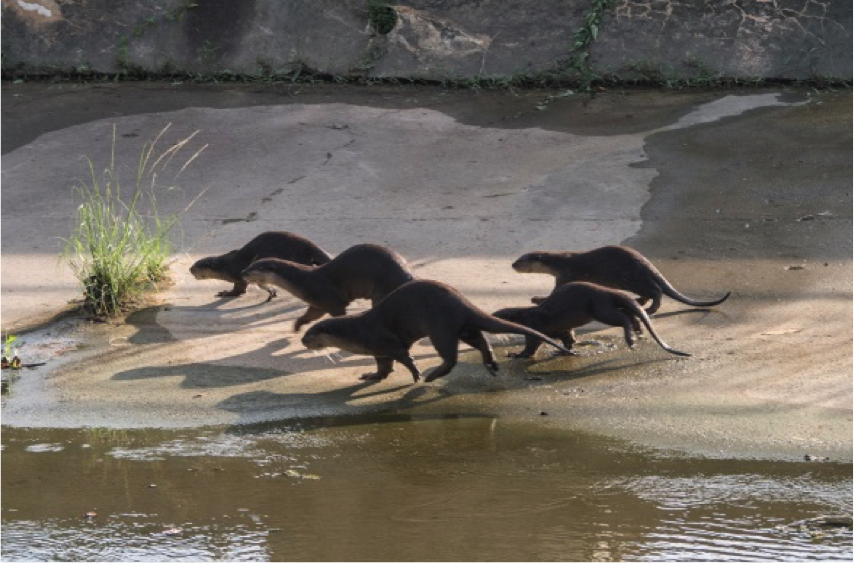 Pack of otters travelling on land, beside a water body. Photo by Max Khoo, used with permission.

Global Threats
With a general decreasing population size, smooth-coated otters have been listed as vulnerable (VU) on IUCN's Red List. This is largely due to anthropogenic reasons. With an increase in the number and scale of hydroelectric projects and a rise in wetland reclamation, habitat destruction is a major reason for the smooth-coated otter's decline 35  22 . In addition, pollution of waterways by pesticides and agricultural run-off leading to a decrease in prey (fishes) for the otters has also been identified as a cause of its decline 14  22 .

With their diet largely comprising of fish, it comes as no surprise that smooth-coated otters also experience serious and widespread conflict with aquaculturists and fishermen 11 22 . They are often viewed as pests or competitors and thus killed 36 . In India, Nepal and Bangladesh, these furry creatures are even deliberately trapped and killed for their fur 14 .

Local Threats
In urban Singapore, one of the threats that the smooth-coated otters face is onshore traffic 37 . There were two reports of otters hit by traffic in 2011, one in Harbour Drive near West Coast Park, and another near Bedok Reservoir 38 . More recently, a video that went viral showed a man unethically trying to bait the otters with a fishing hook at the Kallang River 39 , causing many to speak up against animal cruelty. It was probably done out of curiosity towards these fairly new creatures to Singapore and resulted in one otter pup being injured. However, the man has since voluntarily identified himself to the police and the otter pup has fully recovered as well 40 .
Additionally, otters are highly adaptable and inquisitive by nature. As such, otters in urban areas such as Singapore have often been sighted venturing into human-populated areas 41 42  and their presence is not always welcomed. In mid-2015, the smooth-coated otters made the headlines in Singapore for feasting on ornamental koi worth over SGD$80,000 43 44 . 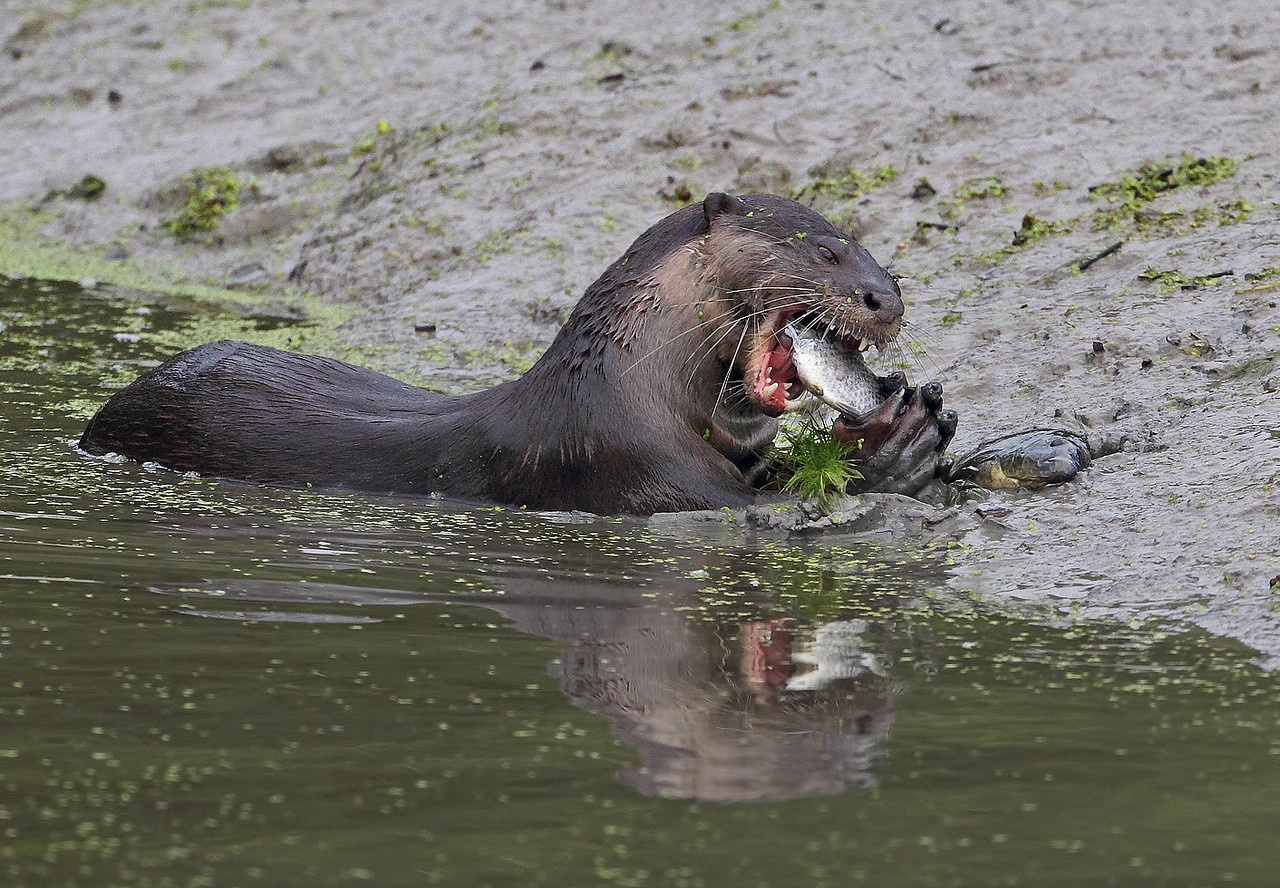 An otter feasting on a fish. Photo by Graeme Guy.

One other threat that the smooth-coated otters are facing not in Singapore, but in the local region, is coastal development in Johor. As the otter's habitat is destroyed, they are forced across the straits, which is also the suggested reason for the increased sightings of otters in Singapore (as mentioned in the introduction) 18 .

While the smooth-coated otters of Singapore have become a nuisance in some places, they have also won over the hearts of many with their amiable and endearing antics 45 46 47 .

The playful smooth-coated otters at Bishan-AMK Park interacting with an elderly man trying to take photos of them. Video credits: Fast Snail.

To ensure that people continue to live in harmony with the smooth-coated otters, the National Parks Board (NParks) has issued the following advisory 48 . Should one ever encounter the otters:
- Do not touch, chase or corner the otters, and observe them from a distance; going too close may frighten them.- Stay quiet and avoid flash photography; noise and light may scare or provoke the otters.- Do not feed the otters; they have plenty of fish from the river to feast on and their natural eating habits keep the ecosystem healthy.- Keep your dog on a tight leash; your dog might chase and frighten the otters.- Additionally, do not litter or leave sharp objects in the water; keep the otters' habitats clean and healthy.

Should members of the public spot any injured otters, they can call the ACRES Wildlife Rescue Hotline, 9783-7782.

The classification of Lutrogale perspicillata is as follows 22 :

Each taxon is a subset of the one above it. The use of ranks has been discarded as they do not contain any meaningful taxonomic information.

The original type specimen of L. perspicillata first described and documented by Geoffroy in 1826 was not preserved. 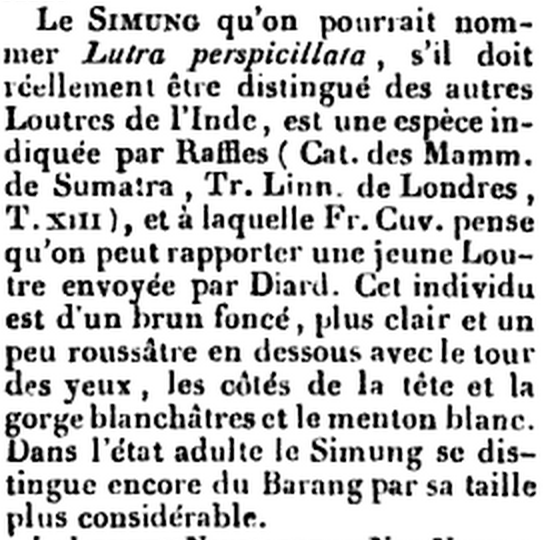 However, there exists three subspecies of L. perspicillata and the holotype of one of them, L. p. maxwelli, was found in Iraq and is kept under the Natural History Museum (London) Collection Specimens 49 . The existing holotype of L. p. maxwelli is a juvenile male.

L. p. perspicillata has a dark chestnut brown coat, with a whitish chin and paler belly and feet. L. p. maxwelli is very similar to L. p. perspicillata in that it also has a coat of dark brown fur. However, the chin is iron-grey rather than white, and the belly is only slightly paler than the rest of the coat. L. p. sindica is a much paler animal compared to L. p. perspicillata and L. p. maxwelli, varying from tawny to greyish. In addition, it is also the smaller in size than the other two subspecies. No pictures have been provided as there is a lack of reliable sources that have appropriately distinguished between the subspecies.

However, later on, a molecular analysis for L. perspicillata was conducted and the results revealed that its closest relative was Aonyx cinerea (Asian small-clawed otter) rather than P. brasiliensis 53 . 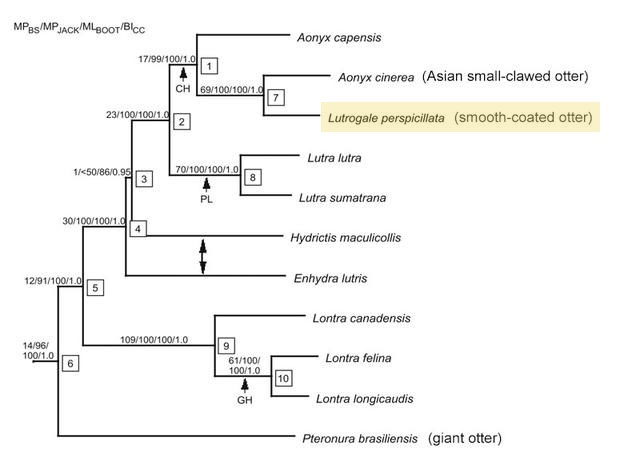