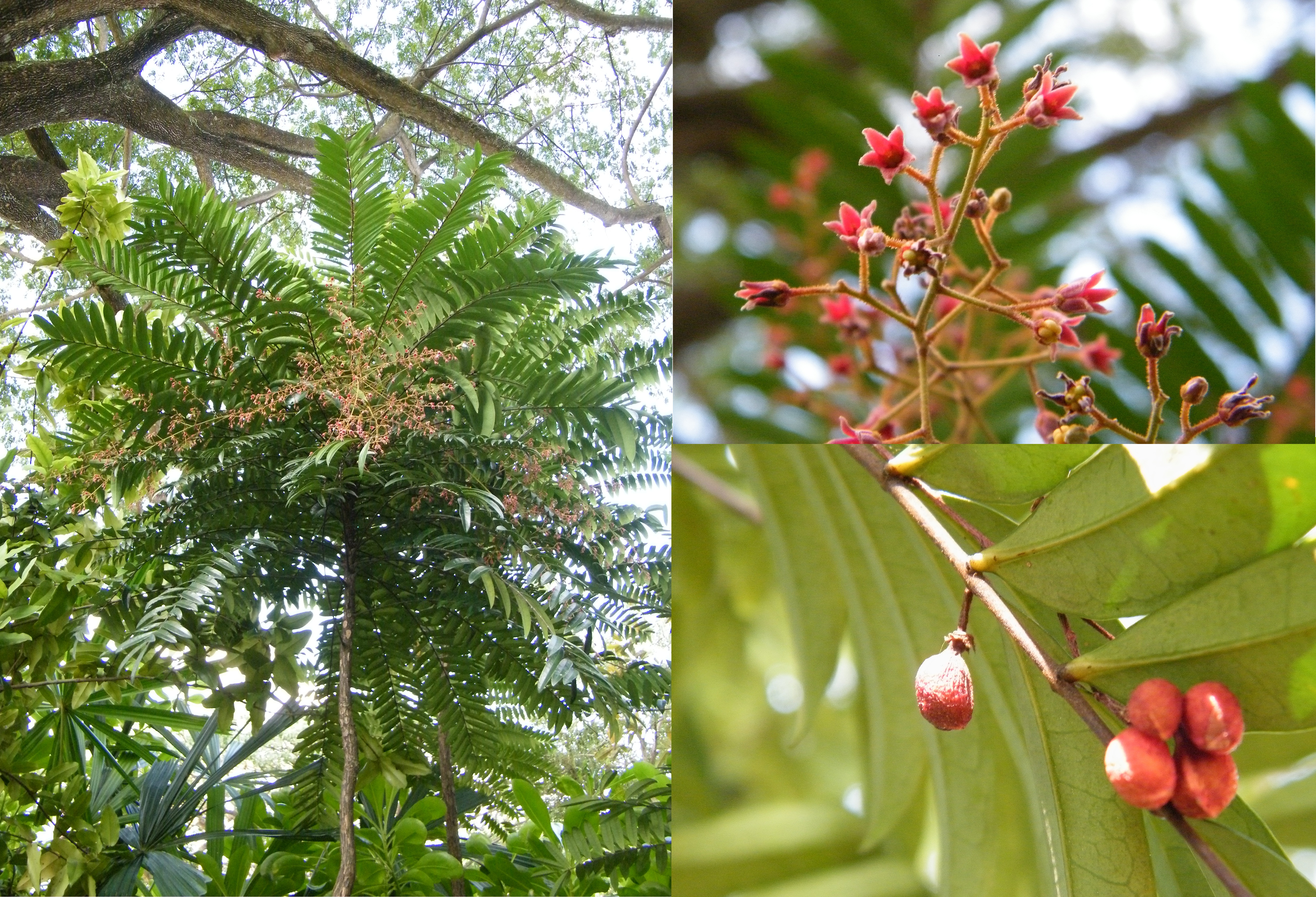 Eurycoma longifolia Jack, more commonly known as Tongkat Ali, is a small understorey tree, in the family Simaroubaceae, native to many countries in Southeast Asia
1 . It is also known under the names Ali's Umbrella or Penawa Pahit1 .

The plant is a valuable economic product of the Malay Peninsula because of its many purported medicinal uses, such as acting as a remedy for fever, stomachaches and other ailments
1 2 3 . Most importantly, the plant is well known for its aphrodisiac properties4 . It is believed that a man's sexual abilities and virility can be improved through the consumption of the bark and roots of the plant5 . As a result, there are currently many male health supplement products (e.g. Tenaga), containing the plant's extracts, being sold on the market6 . Additionally, in recent years, there have been many other proposed medicinal uses of the plant.

Despite its popularity, the actual effectiveness and safety of the medicinal use of the plant is still open to debate. This is because there is limited scientific evidence that support the plant’s potential in treating minor ailments7 . Furthermore, there are only a few scientific research papers that prove the plant’s success in improving sexual vitality in animals, but not humans8 9 . In addition, there have been some safety issues and controversies surrounding the use and sale of products that supposedly contain the plant's extracts10 .

Therefore, this page aims to provide information, diagrams and links to help you gain a better understanding of Tongkat Ali and its many uses and functions. This page also aims to showcase other interesting facts to help you discover Tongkat Ali beyond its notorious use as an aphrodisiac.

Tongkat Ali can usually be found, as an understorey treelet, in undisturbed mixed dipterocarp and keranga forests up to 500m altitude and in disturbed secondary forests as a per-disturbance remnant3 11 . It can also be found on hillsides and ridges, with sandy or clay soils. Hence, this shows that the plant is able to survive in many different forest types and soil types.

Tongkat Ali is mainly distributed in the Southeast Asia Region. The distribution range includes: Lower Burma, Thailand, Laos, Cambodia, Indo-China, Sumatra, Peninsular Malaysia, and Borneo12 . It is also common throughout Sabah and Sarawak, as well as Brunei and Kalimantan.

Tongkat Ali is distributed in Singapore but it is not common.

According to folk beliefs, Tongkat Ali has many purported medicinal uses such as being a cure for fevers, stomachaches and other minor ailments and a tonic for childbirth2 12 . Thus, the leaves, bark and roots of the plant are often extensively harvested by the locals. However, there is insufficient evidence to support the plant's effectiveness as a remedy for these minor ailments. Hence, the continued medicinal use of Tongkat Ali to treat these minor ailments is mainly based on indigenous knowledge and beliefs.

Tongkat Ali is also most famous for its potential to be an aphrodisiac4 . Hence, the bark and roots of the plant are often harvested by the locals and commercial companies. There is some evidence to support the plant's effectiveness as an aphrodisiac. It has been reported in some scientific papers that injections containing the extracts from the roots of the plant successfully increased testosterone levels and sexual qualities in male rats8 9 . Therefore, these results suggests that the plant is likely to have the potential to be an aphrodisiac. However, these experiments were performed on animals and not humans. Thus, it is difficult to deduce if the plant has the same positive effects on male humans. This raises some major concerns as products containing extracts of the roots of the plant are becoming very popular in the market but there is still limited information about the plant's actual properties and effects.

According to current literature, Tongkat Ali is also noted for its anti-malarial and anti-cancer properties14 . It has been reported in many scientific papers that the roots of the plant contains many natural chemical compounds such as quassinoids (e.g. Eurycomanone) and alkaloids (e.g. 7-methoxy-β-carboline-1-propionic acid)14 15 16 . These natural chemical compounds were found to show antimalarial activity through studies conducted with the protozoan parasite, Plasmodium falciparum, that causes malaria14 15 . Additionally, other quassinoids (e.g. 14,15β-dihydroxyklaineanone and 11-dehydroklaineanone) were found to show anti-tumor promoting and anti-parasitic activities through studies conducted with tumour promoter induced viral activation and P. falciparum14 16 . Hence, the results suggests that the plant contains many useful natural chemical compounds which could be used in the treatment of malaria and cancer. However, further studies need to be carried out to confirm the plant's properties before it can be widely used.

Across the Southeast Asia region, Tongkat Ali is sometimes planted as an ornamental plant or wayside tree due to its interesting appearance or for its medicinal use. In Singapore, the plant has been observed to be planted in gardens and along the road.

It is important to note that Tiger Moth is regarded as a serious pest of Tongkat Ali18 . The recent rapid rise in Tongkat Ali plantations has led to more outbreaks of the moth, which is likely to cause severe financial damage to the commercial companies18 .

Tongkat Ali is an important economic product in the Southeast Asia region2 . Over the past few decades, there has been a growing demand for products containing the extracts of the roots of the plant due to its purported medicinal uses. Hence, this has added pressure to the growing and harvesting of the plant. This threatens the conservation status of the plant in the region as over exploitation is causing the numbers of the plant to drop rapidly. Many countries have listed Tongkat Ali as critically endangered or protected in order to prevent more harvesting and over exploitation.

A case study in Singapore proves that these issues are pertinent. On 8 May 2009, the Health Sciences Authority (HSA) published a press release on its website to warn consumers against consuming “XP Tongkat Ali Supreme” capsules which was found to contain undeclared potent substance23 . The product was originally declared to contain Tongkat Ali, which is considered to be a natural herbal ingredient. Hence, it was considered a form of traditional medicine and was not required to be tested, registered or approved by the HSA. However, subsequent tests revealed that another potent substance, instead of Tongkat Ali, was present in the capsules. The potent substance could potentially cause severe health complications if used without a prescription. Therefore, the product was eventually recalled and a public advisory was sent out through the media24 . This case study highlights the issues of the use of traditional medicine without any requirements for testing, regulation and approval by the relevant authorities. Hence, all consumers need to be aware of the risks associated with the use of traditional medicine.

To help you understand Tongkat Ali better, here are some interesting facts about the plant:

Discoverer of the plant

Eurycoma longifolia Jack was first discovered, in Sumatra and Singapore, and described by William Jack. The original description of the species was published in the Malayan Miscellanies, Volume 2, in 182225 . The original publication was reprinted as the Description of Malayan Plants, I - III, Bencoolen 1820 - 1822, by Boerhaave Press, Leiden, in 197713 .

Figure 18 is the phylogenetic tree of the family, Simaroubaceae which shows the evolutionary relationship between the different genus and species. The tree has been adapted from Clayton et al., 2007. Please refer to the original publication for more details29 . 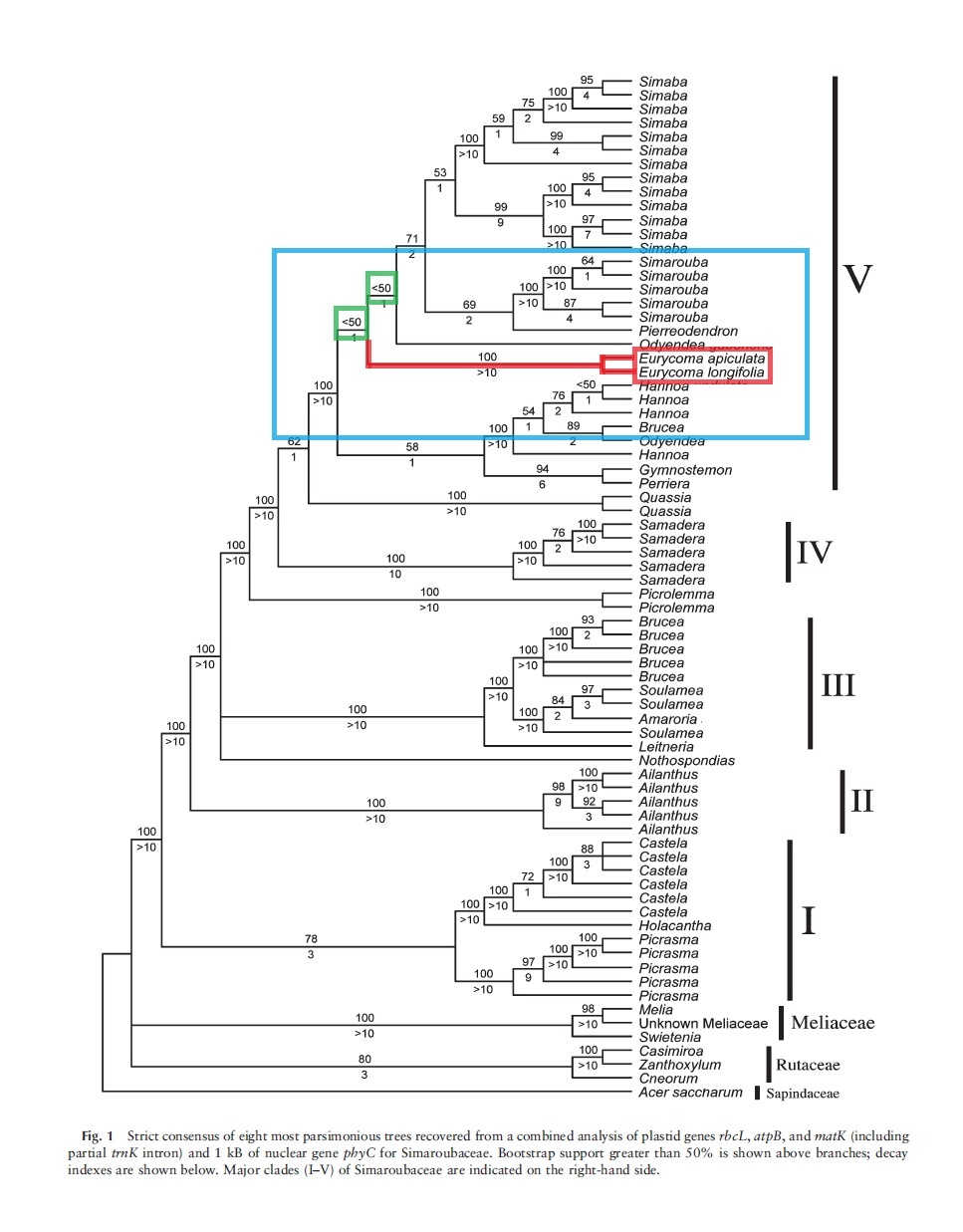 Figure 18 shows a blue box where the main relationship between Eurycoma longifolia and species from other genus can be observed. In the blue box, the red lines indicate that the two species Eurycoma longifolia and Eurycoma apiculata are sister species which have descended from the same common ancestor. This relationship is very stable as the bootstrap value (above the red line) is 100%. However, the green boxes indicate that the two species, from the genus Eurycoma might not share a stable relationship with the other genus as the bootstrap value (in the green line) is less than 50%. Thus, the relationship between species and genus can be deduced by looking at bootstraps values on the phylogenetic tree.