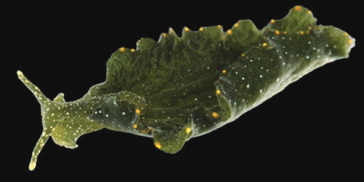 Fig. 1. Elysia bangtawaensis, the slug that photosynthesizes like a plant. Image obtained from Jensen (2015).

Elysia bangtawaensis belongs to a group of sap-sucking sea slugs called the sacoglossans. They are described as sap-suckers because of the way they feed, in which they use their mouth parts to suck up the cellular contents of algal cells and digest them 1 . These sea slugs have a leaf-like shape. and are also usually green. Not only do they look like leaves however, they have also been found to retain functional chloroplasts from the algae they feed on, and derive energy from the chloroplasts via photosynthesis1 . As if they were not weird enough, these slugs are also simultaneous hermaphrodites, possessing the sexual organs of both sexes1 . In Singapore, these slugs are commonly known as the mangrove leaf slugs.

Elysia bangtawaensis was originally discovered in 1997, within a mangrove forest near a village called Bang Tawa in southern Thailand, but has subsequently been found in multiple other mangrove forests in Thailand, Malaysia, Australia and Singapore 2 3 .

Within Singapore, Elysia bangtawaensis has been found in the mangrove forests at Sungei Mandoi Besar and Sungei Buloh 4 .

Habitat
Elysia bangtawaensis can be found in mangrove forests/swamps, occupying shallow pools of water on the mangrove forest floor while preferring shaded areas with less sunlight2 . They have also been documented to occur in algal beds and seagrass patches within the intertidal zone of certain estuaries 5 . 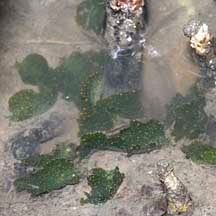 Fig. 2. Several Elysia bangtawaensis found in the Kranji Nature Trail, clustering around the base of a tree. Image obtained from Ria Tan.

Typically, gastropods (snails and slugs) use a feeding apparatus known as the radula to scrape microscopic algae off of surfaces for food or feed directly on a food plant 6 . They have multiple rows of teeth on their radula to facilitate this type of feeding behavior6 . Sacoglossans are distinguished from other gastropod taxa by only having a single row of teeth present on their radula, which they use for suctorial feeding 7 . Elysia bangtawaensis in particular, has approximately seven to nine teeth on both the ascending and descending limbs of its radula 2 . Like other sacoglossans, Elysia bangtawaensis has a sac located beneath its pharynx, known as an ascus, in which it keeps used teeth worn out from feeding 8 . Currently, it is not yet known why sacoglossans retain their worn-out teeth.

Fig. 3. Scanning electron micrographs of (A) the radula of Littorina littorea, a gastropod which has a rasping mode of feeding, and (B) the radula of Elysia bangtawaensis, which has a suctorial mode of feeding. Note the multiple rows of teeth for a grazing gastropod, and the single row of teeth of a sacoglossan. Image modified from Steneck and Watling (1982) and Jensen (2015).

Using a single blade-shaped tooth, Elysia bangtawaensis is able to penetrate the cell wall of the algal cell it is feeding on, subsequently sucking up the cytoplasm of the cell 9 . To suck up the cellular contents of its food, its pharynx muscle works in conjunction with odontophore muscles to function like a pump 10 .
In many cases, the shape of a sacoglossan’s teeth can indicate the type of algae it is feeding on, as different types of algae may have either planar or filamentous morphology, which would then require different modes of penetration 9 . For example, sacoglossans with triangular teeth have been found to feed on Caulerpa seaweed, which mostly have planar morphology 9 . The blade-shaped teeth of Elysia bangtawaensis on the other hand, seems to function equally well in piercing the cells of both planar and filamentous algae types 9 . The image below depicts how the teeth of Elysia bangtawaensis may function during feeding. 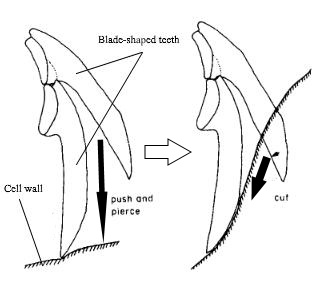 Fig. 4. Proposed mechanism of how Elysia bangtawaensis may use its teeth to penetrate algal cell wall. One tooth penetrates the cell wall, then the preceding tooth acts as a pivot to make a cut in the membrane. Solid black arrows indicate the direction of force. Image modified from Jensen (1993).

Kleptoplasty
Kleptoplasty is perhaps the most-studied aspect of sacoglossans, as they are currently the only animals that have been found to have this ability 10 . Kleptoplasty (‘klepto-’ as in from the word ‘kleptomaniac’), refers to the ability of approximately 75 sacoglossans species to retain chloroplasts, from algal cells that are a part of their diet, in their digestive epithelium11 .

Specifically in Elysia bangtawaensis, the retention of functional chloroplasts also occurs, with the slug being able to photosynthesize in low light conditions. However,no detailed research has yet been done on whether the retention is long-term, and if the slug uses photosynthesis-derived energy as a supplement for its survival 17 .
Other than energy, kleptoplasty may also grant sacoglossans a form of crypsis as the retained chloroplasts usually confer the slugs a color similar to their food plants, a phenomenon known as nutritional homochromy 18 . From afar, Elysia bangtawaensis does indeed look like a piece of fallen leaf on the mangrove forest floor (Fig. 8.), but it is yet to be determined whether the resemblance is incidental, or merely a coincidence 17 . 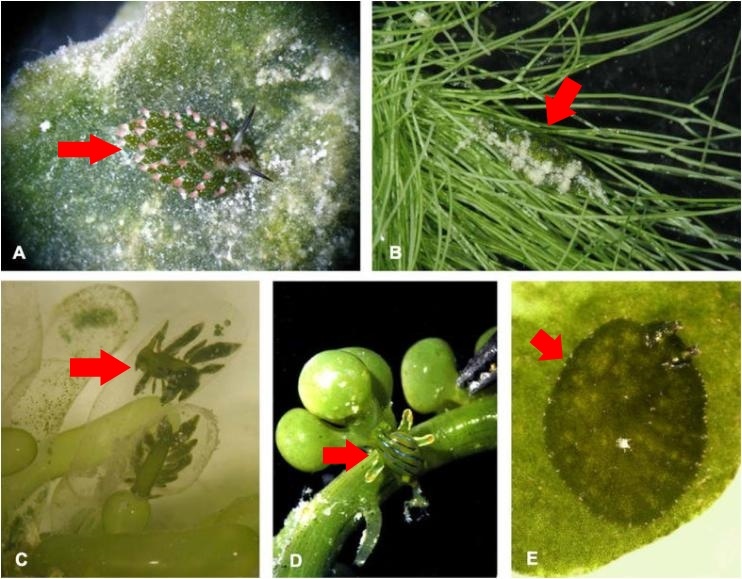 Reproduction
Elysia bangtawaensis (and other sacoglossans) are simultaneous hermaphrodites, possessing both a penis and a vagina at the same time19 . The vaginal aperture of Elysia bangtawaensis is located on the ventral side of its right parapodium, near the head of the slug 17 . The slugs copulate by first positioning their right parapodia against their partner’s body, and subsequently both slugs may insert their conical penises into each other’s vaginas19 . 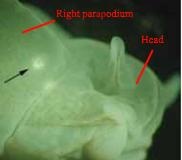 Fig. 7. Black arrow points to where the vaginal aperture is located in Elysia bangtawaensis. Image modified from Swennen (2011).

After copulation, Elysia bangtawaensis lays egg strings up to 720 mm long with no definite shape, and may be coiled around suitable substrate in its natural environment19 .

Currently, there are no documented exploitation of Elysia bangtawaensis in Singapore or other countries. According to the WildSingapore factsheet by Ria Tan, none of Singapore’s sacoglossans are listed as endangered 20 . However, Elysia bangtawaensis could still be at risk, if its habitats (the northern mangrove forests of Singapore) are used for land reclamation in the future 20 .

Coloration: Dark green body with numerous orange glandular dots present along the sides of its parapodia. White speckles found all over the body, even on the head and rhinophores. Tips of rhinophores usually white or orange19 . 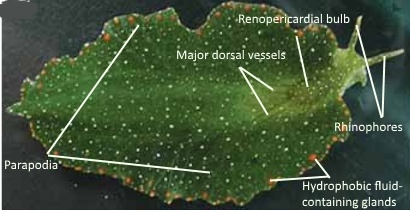 Identification
Several species of Elysia slugs have been found to occur in Singapore, and may initially look quite similar. Four such species that have been properly described in literature are included in the figure below. Elysia singaporensis is a new species that was discovered in Singapore within the Sungei Buloh Wetland Reserve in 200919 . Specimens of Elysia ornata and Elysia cf. verrucosa were obtained by Jensen (2015) from Pulau Sekudu and Tuas, respectively 21 .

Differentiating between these Elysia slugs primarily involves looking at the coloration of their rhinophores, and the position and color of spots that are present on their body. 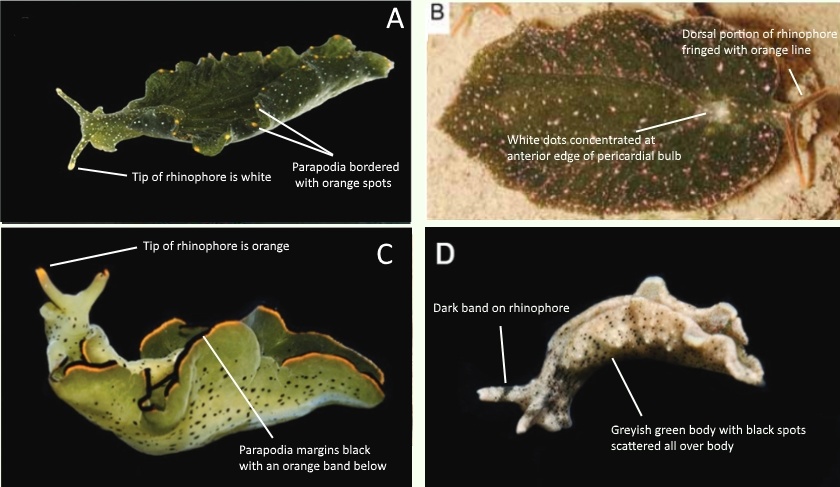 Fig. 9. Comparison of several Elysia slugs which can be found in Singapore, labelled with some of their distinguishing features. A, Elysia bangtawaensis. B, Elysia singaporensis. C, Elysia ornata. D, Elysia cf. verrucosa.Image modified from Swennen (2011) and Jensen (2015).

Etymology
The specific epithet ‘bangtawaensis’ was derived from a village called Bang Tawa, from which the slug was first discovered. Swennen wished to honour the Bang Tawa villagers with the name, as he stated that “the villagers have protected their forest against the shrimp culture companies that are converting large parts of the natural productive and complex coastal ecosystems into ‘bio-industrial deserts’2 .

Synonyms
There are currently no synonymised names for Elysia bangtawaensis 22 . 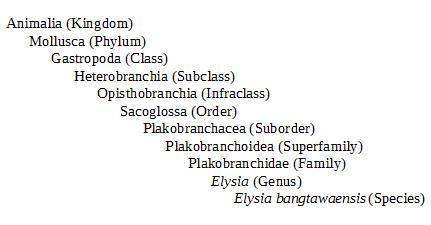 Fig. 10. Classification of Elysia bangtawaensis according to the World Register of Marine Species (2011).

Phylogeny
Currently, Elysia bangtawaensis has not been considered in any existing phylogenetic analyses of the sacoglossans. A preliminary study on the molecular phylogeny of Sacoglossa used a partial sequence of the mitochondrial 16S rDNA gene to conduct a Maximum Parsimony analysis and a Maximum Likelihood analysis 23 . 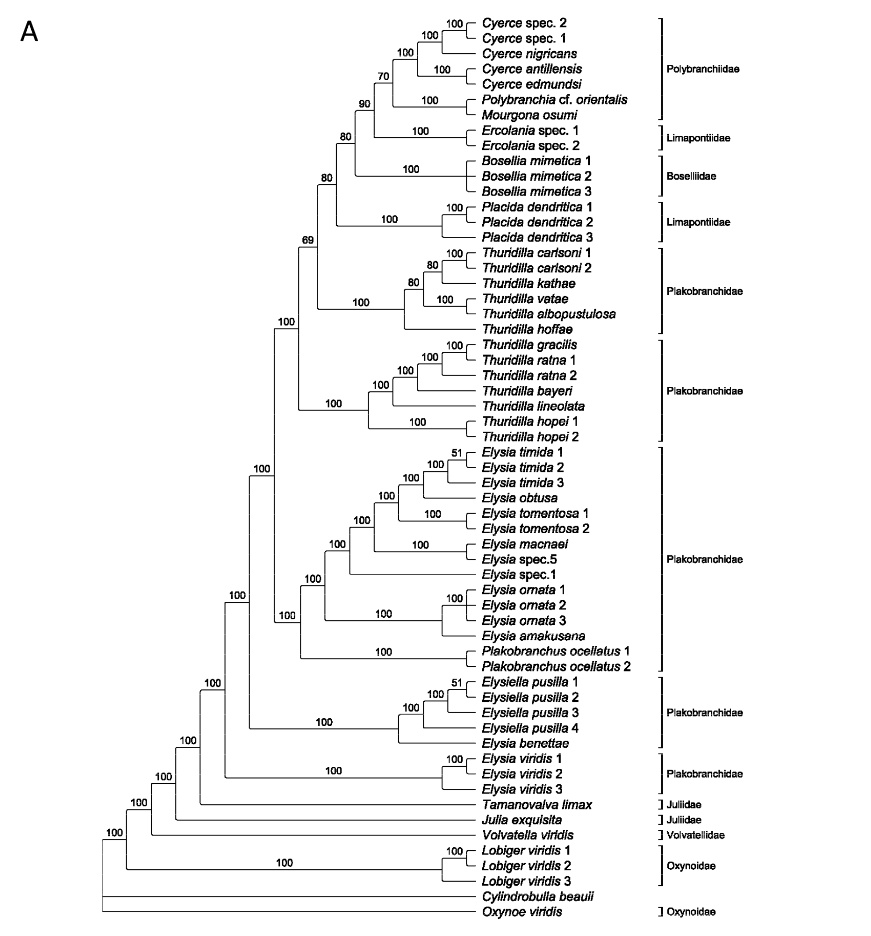 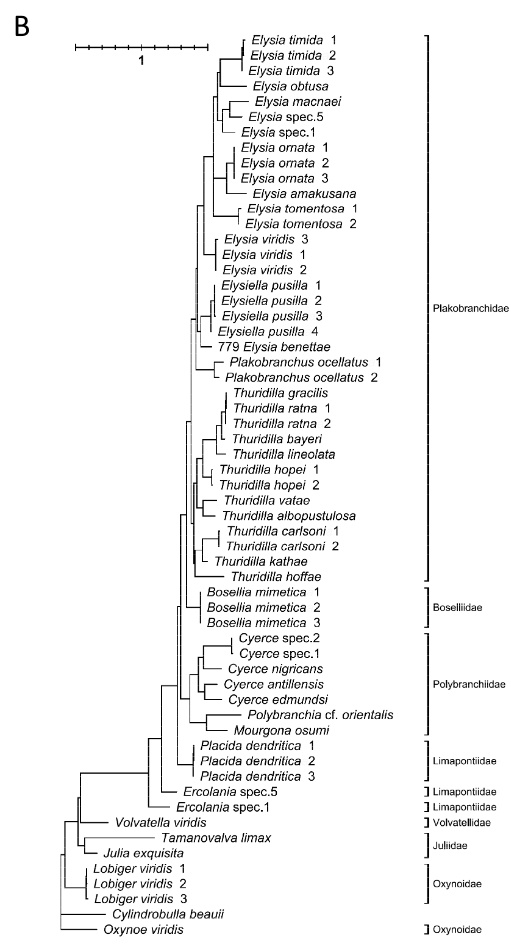 Both of these trees indicated that there was paraphyly in Oxynoacea, while the original phylogenetic hypothesis on Sacoglossa by Jensen (1996) proposed that Oxynoacea was a monophyletic group23 . This was likely because the number of species from Oxynoacea analysed in this study was insufficient, thus reducing the resolving power of the analyses 23 . Furthermore, the 16S rDNA gene was reported to have a high substitution rate even at taxons higher than species level23 , which makes it harder to properly discern the relationship between closely-related species. There were also incongruities between the two trees, with Plakobranchidae being a paraphyletic group in the maximum parsimony tree but a monophyletic group in the maximum likelihood tree. The authors chose to focus discussion on the maximum likelihood tree as it was more compatible with the phylogenetic tree constructed by Jensen (1996), which was based on sacoglossan morphology23 . With both molecular as well as morphological rationale for the relationships between different sacoglossan species, it made sense for the authors to place greater weight on the maximum likelihood tree.

A later, more detailed study performed by the same authors, used a combined data-set derived from both the mitochondrial coxI and 16S rDNA genes, as well as the nuclear 28S rDNA gene 12 . Using partial sequences from both mitochondrial and nuclear genes made the results of this analysis more robust, as solely using mitochondrial DNA may not be representative of the phylogenies obtained from nuclear DNA sequences. It would have been even better to analyze the incongruities between the phylogenies obtained from solely mitochondrial or nuclear gene sequences to give the combined tree added credibility. The Bayesian analysis performed managed to separate the sacoglossans into two major monophyletic clades, the shelled (Oxynoacea) and shell-less (Plakobranchacea) sacoglossans, with strong support (100%)10 . Furthermore, Plakobranchoidea was proposed to be a monotypic family, and Elysia a monophyletic genus 12 . The character state of chloroplast retention (no retention/short-term retention/long-term retention) was also used for ancestral character state reconstructions, which showed that the origin of short-term chloroplast retention likely originated in the most recent common ancestor of the Plakobranchoidea 12 . 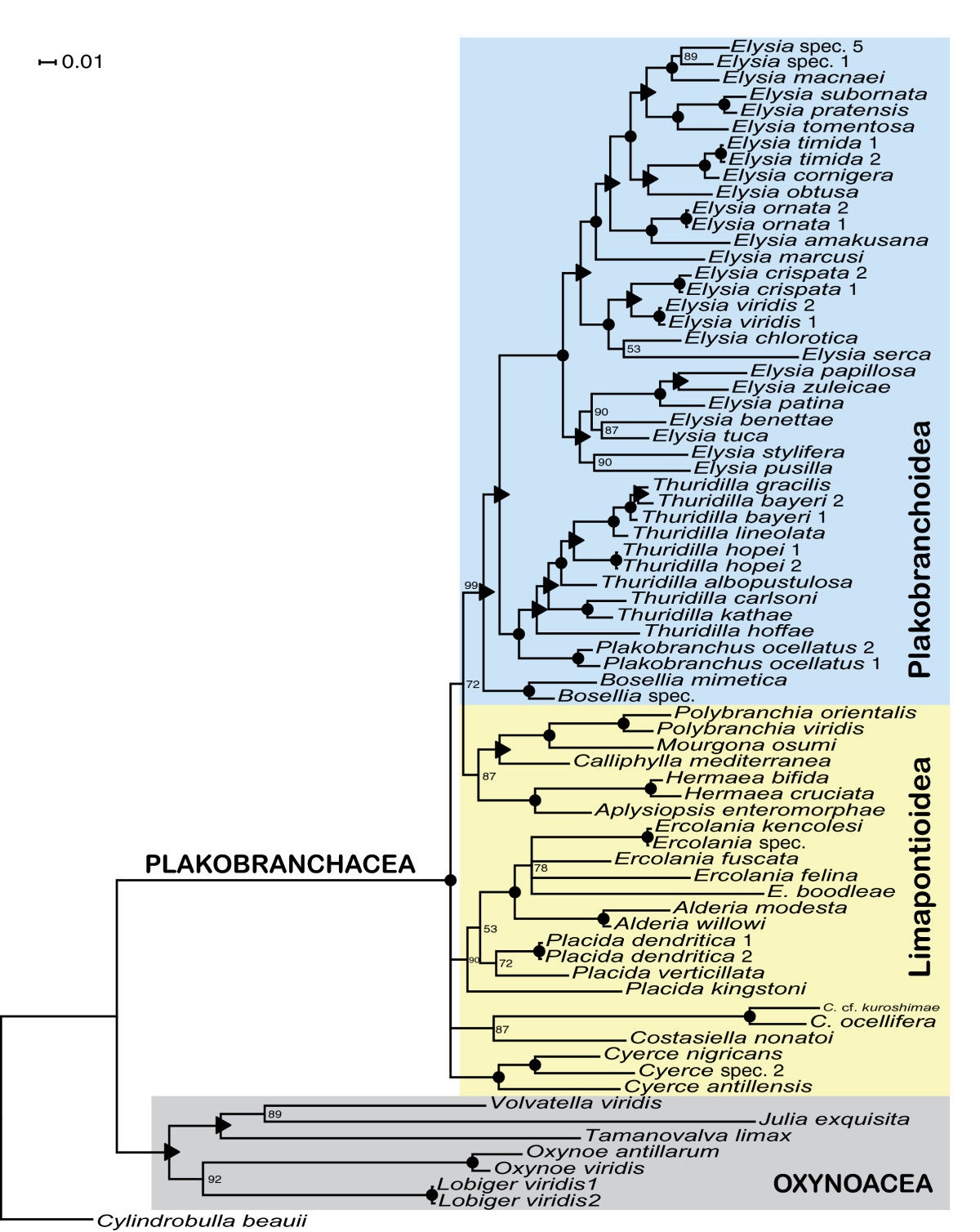 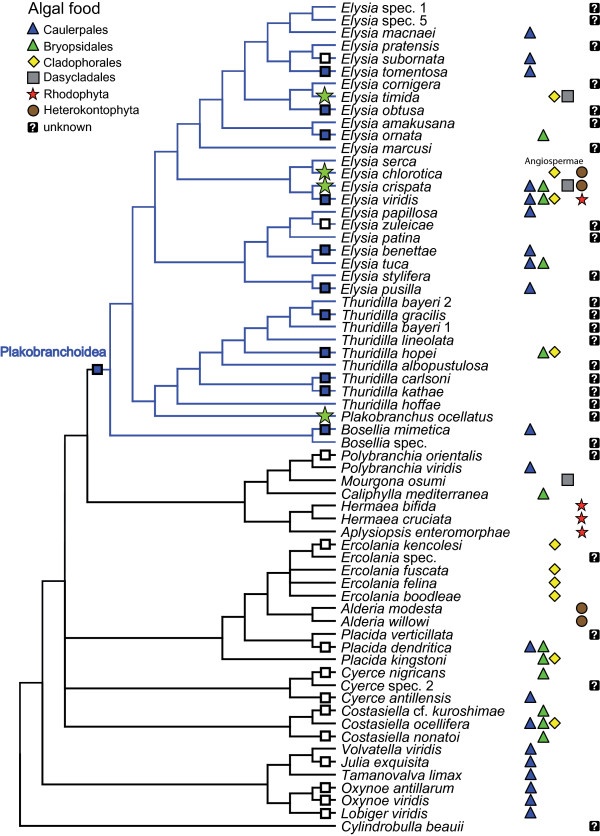 In summary, this phylogenetic tree of Sacoglossa revealed some interesting relationships, as it was found that only species in Plakobranchoidea had evolved short-term and long-term kleptoplasty 12 . From this, it was proposed that the evolution of kleptoplasty was the main driver behind adaptive radiation in the Plakobranchoidea superfamily, which has five times the number of species of its sister taxon, the Hermaeidae family 12 . In addition, the evolution of parapodia in Plakobranchoidea was also said to enhance the usefulness of kleptoplasty, as sacoglossans with parapodia could control how much light the retained chloroplasts were exposed to, and possibly prevent photo-damage 12 .