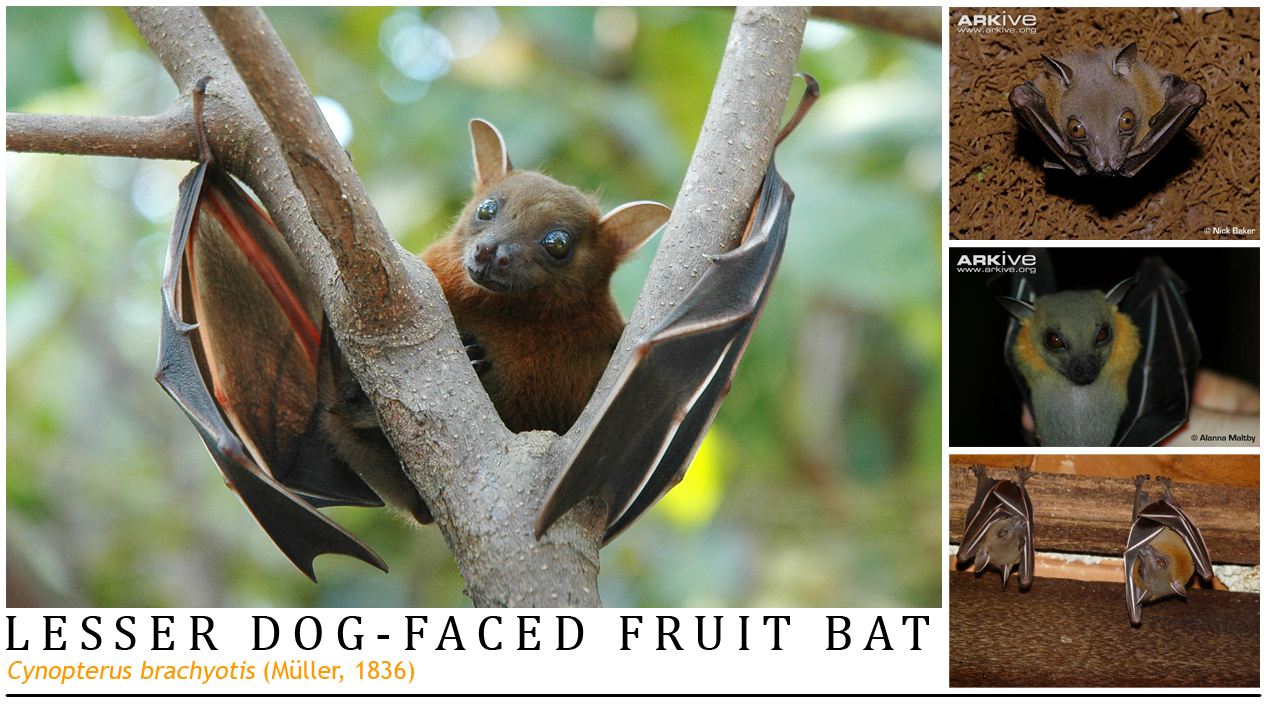 The Cynopterus brachyotis, or more commonly known as the lesser dog-faced fruit bat, was first discovered near the serene Dewei river in lush Borneo by Muller on 12 September 1836. It belongs to the Megachiroptera (Megabats!) suborder within the Pteropodidae family of the order Chiroptera (bats). Although it is a species of megabat, this majestic creature is small, cuddly and cute but cannot and should not be brought home and domesticated. Still, you can adopt a bat today!

Watch this video on the conservation of baby fruit bats!

Have you seen their large eyes?
The lesser dog-faced fruit bat usually cluster in small groups and forage with their keen sense of smell and sight. Unlike Microchiroptera bats, Megachiroptera bats are not capable of laryngeal echolocation as such a mechanism is too energetically expensive to retain. So, the lesser dog-faced fruit bat has its distinctive large eyes for smooth navigation at night.

In addition, the combination of sound and sight is required for the navigation of the lesser dog-face fruit bat. In a study (Heffner et al. 2008), it was shown that hearing is used to direct eyes to source of sound for sound localization.

Sleeping on beds is too boring.
All animals need to rest after a long day of feeding - bats are no different! As you may have seen on television or in movies, bats have very peculiar resting (roosting) behaviour. In the day, the lesser dog-faced fruit bat finds shelter in shaded trees, tree-ferns and near entrances of caves.

The Perfect Life: Make a home and find a mate

These tents serve to keep the furry little bats from vicious predators and also shelters them from wind and rain. An interesting fact about roost tents: Males make tents and recruit females (Tan et al, 1997). Males are also observed to have high roost fidelity as a resource defence strategy (Chaverri and Kunz 2006). Females will then choose males based on roost quality. Thus, males have high productivity pay-off if they successfully recruit females and exclude other males from roosts.
Back to top

Bats are mammals with powered flight!
The body structure of bats enable them to fly great distances. Bats have modified skeletons and use various muscles for flight. They do not have reinforced sternums, unlike birds which power their flights with their breast muscles. Also unlike feathers on bird, bats have highly articulated and flexible wings which enable them to fly with greater manoeuvrability, increased lift and lesser drag.

Much research has been conducted to detail the mechanisms of flight in bats, especially for the lesser dog-faced fruit bats. In this species, change in flight direction due to changes in body orientation during up-stroke has been observed. On the other hand, changes in flight direction is restricted during the down-stroke portion of the wing-beat cycle.

Lesser dog-faced fruit bat are fruigivores!Do you know what is a fruigivore?

In Malaysia, the keystone resources to sustain the population of bats are Ficus spp, Piper aduncum and Pternandra echinata. Seasonal feeding is also present for the lesser dog-faced fruit bats in Malaysia. It feeds mainly on fruits in months of March to June, which coincides with local fruiting seasons. On the remaining parts of the year, it feeds on floral parts. 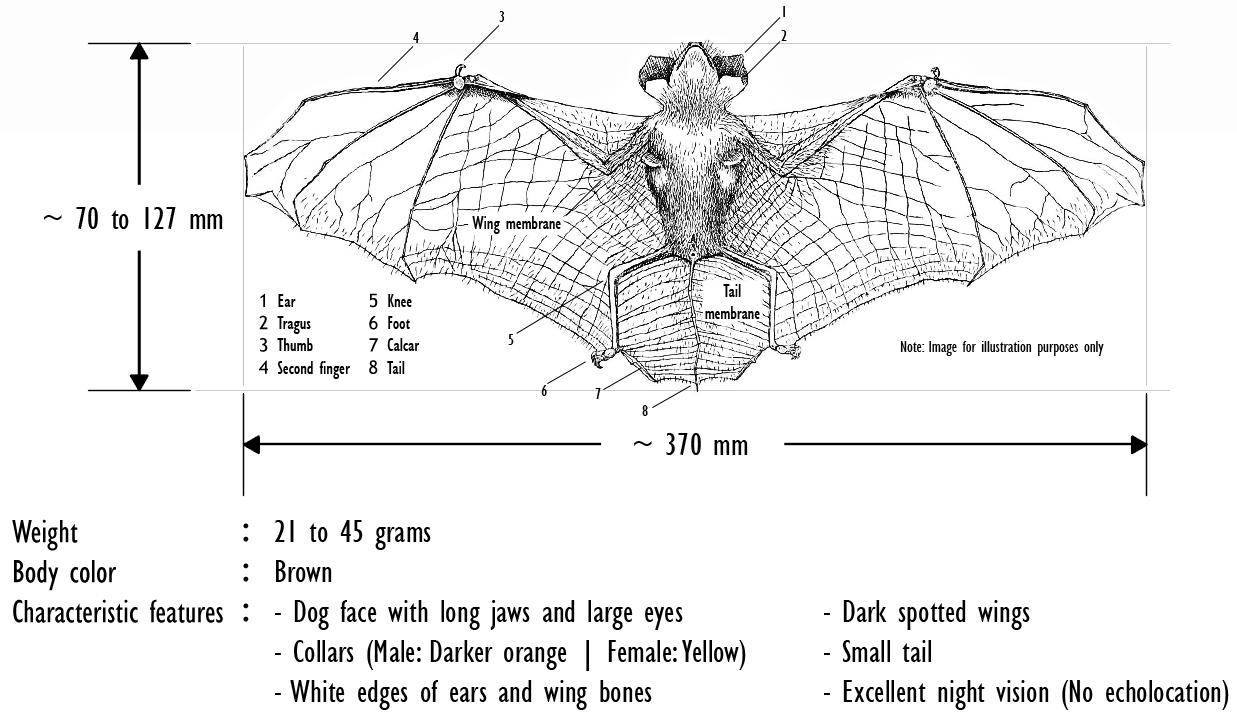 The Cynopterus brachyotis is the most common fruit bat to be found in Singapore. It belongs to the Megachiroptera suborder which are frugivores with long heads, long jaws, and large eyes for excellent vision. As a result, they do not require to use echolocation for navigation in the twilight and in caves.

Interestingly, it has a lifespan of 20 to 30 years albeit possessing high basal metabolism rates, similar to other frugivorous species (McNab, 1989).

Can you guess which one is the lesser dog-faced fruit bat?

How to know which one is the lesser dog-faced fruit bat?Lesser dog-faced fruit bats typically mature between 70 to 127 millimetres for head and body, with an average wingspan of about 370 millimetres and average wing area of 21 cm2 (Hodgkison et al, 2004). At such a small size, it weighs only about 21 to 45 grams. The greyish young will develop into brown adults with collars, where the males have darker orange collars and the females have yellow collars. You can see that it gets its name from the characteristic long dog face and jaw which is obvious in the pictures below! Other features include dark spotted wings, white edges of ears and wing bones, long forearms of 55 to 92 millimetres, a small tail of about 6 to 15 millimetres and of course, large eyes.

In the picture on the left, you can see the huge eye sockets in comparison to the skull for positioning the large eyes that allow the lesser dog-faced fruit bat to see well in the dark.In the picture at the middle showing the underside of the skull, the long dog face is because of the elongated bony palate which forms the top of the mouth.In the picture on the right, you can see the flat quadrate teeth adapted for biting through hard fruit skins and crushing fruits to bits.

Lesser dog-faced fruit bats can be found mainly in Southeast Asia and India. Areas include:

In Singapore, they can be found in a diverse array of landscapes ranging from rural to urban areas.This includes:

When is the best time?

How to know a lesser dog-faced fruit bat is nearby?

Where to search for better chances of finding one?

4. Importance of bats around the world

The lesser dog-faced fruit bat is categorised as of "least concern" because of its extensive presence in Southeast Asia and India, its ability to thrive in a diverse range of habitats (even in people's houses!) and its presumed large population. Also, its population numbers are not declining rapidly enough to qualify as being threatened. The slow decline in population numbers is primarily due to habitat loss from deforestation for timber and oil palm plantations. Even worse, conservation efforts for the lesser dog-faced fruit bat is poor as it is often seen as crop pests due to damage to fruit crops.However, there are conservation programmes present for fruit bats around the world. They include scientific and charitable groups which help for bat monitoring, and local educational programmes. One example is bat cloud.

Tree of life is constructed using Cytochome b sequences for 648 bats, including 550 named species. This data supports the division of bats into megachiroptera and micrchroptera during evolution. This tree serves to approximate the species level phylogeny of bat Chiroptera until other detailed species level phylogenies are available.Phylogenetic relationships between the species of Megachiroptera are investigated using complete cytochrome b genes sequences, with samples collected from islands of Luzon and Mindanao in Philippines. The phylogenetic tree, generated using both neighbor joining and maximum likelihood methods, shows close evolutionary relationship between Cynopterus brachyotis, Ptenochirus jagori and Pteropus vampyrus.Status of Cynopterus brachyotis as a single speciesThe current state of Cynopterus brachyotis is uncertain due to variations of bats, namely in size and colour, that is present in the species.Research by (Campbell et al. 2004) has shown that Cynopterus brachyotis comprises of a complex of distinct lineages. In the figure above, two alternative phylogenetic hypothesis has been constructed using cytochome b. Although the position on the tree and the evolutionary relationships within the clades differ significantly, 6 distinct lineages within this species has been shown clearly and they are named according to their place of origin as follows: Forest, Sunda, India, Myanmar,Sulawesi and Philippines. In addition, C. sphinx and C. horsfieldi also formed monophyletic groups within C. brachyotis species complex.Four lineages from India, Myanmar, Sulawesi and Philippines are well defined geographically. However, two lineages in Malaysia, Sunda and Forest are sympatric and ecologically distinct. Hence, these two lineages are thus further investigated.Another research has also shown that there are different morphological forms in Cynopterus brachyotis in Kubah National Park in Malaysia. The morphological measurements used as character states include ear length, tail length, body length and wing span. Using UPGMA cluster analysis on these morphological features, the figure above shows that the small form and large form of Cynopterus brachyotis lies in two distinct clades. Cynopterus brachyotis belonging to the large form clade in the Sunda lineage is found in open areas, orchards and argicultural areas while the smaller form in the Forest lineage is confined in closed habitat or primary forest.In addition, the type specimen of Cynopterus brachyotis is clustered together with the large form of Cynopterus brachyotis.In support of this findings, micro-satellite data also showed the presence of two lineages in Southern Thailand, Malaysia and Borneo (Fong PH. 2011).Another model was also done to differentiate the fruit bats of C. horsfieldii, Sunda and Forest lineages in Malaysia. As the forearm length is usually employed to distinguish these two lineages during field studies, it will not have high accuracy due to variations in forearm length measurements. Thus, this study (Jayaraj et al. 2012) tried to develop a list of features to attempt to classify the lineages for both field studies and museum specimens. These features include skull, dental and external measurements. UGPMA cluster analysis of 28 characters on morphological measurements showed separate clades of C. horsfieldii, C.cf.brachyotis Forest and Cynopterus brachyotis.In conclusion, more research has to be done to further identify and correctly separate the lineages within Cynopterus brachyotis species. Conservation has to be planned to ensure that all six form do not go extinct. The two lineages Indian and Forest are restricted within the forest habitat, which is becoming increasingly fragmented due to forest loss, thus having higher risks of being endangered.

There are 25 barcode sequences of Cynopterus brachyotis from BOLD and GenBank. Example of these sequences include COX1 and cytochrome B. More information can be obtained here.

Thank for reading my page! Have a nice day! 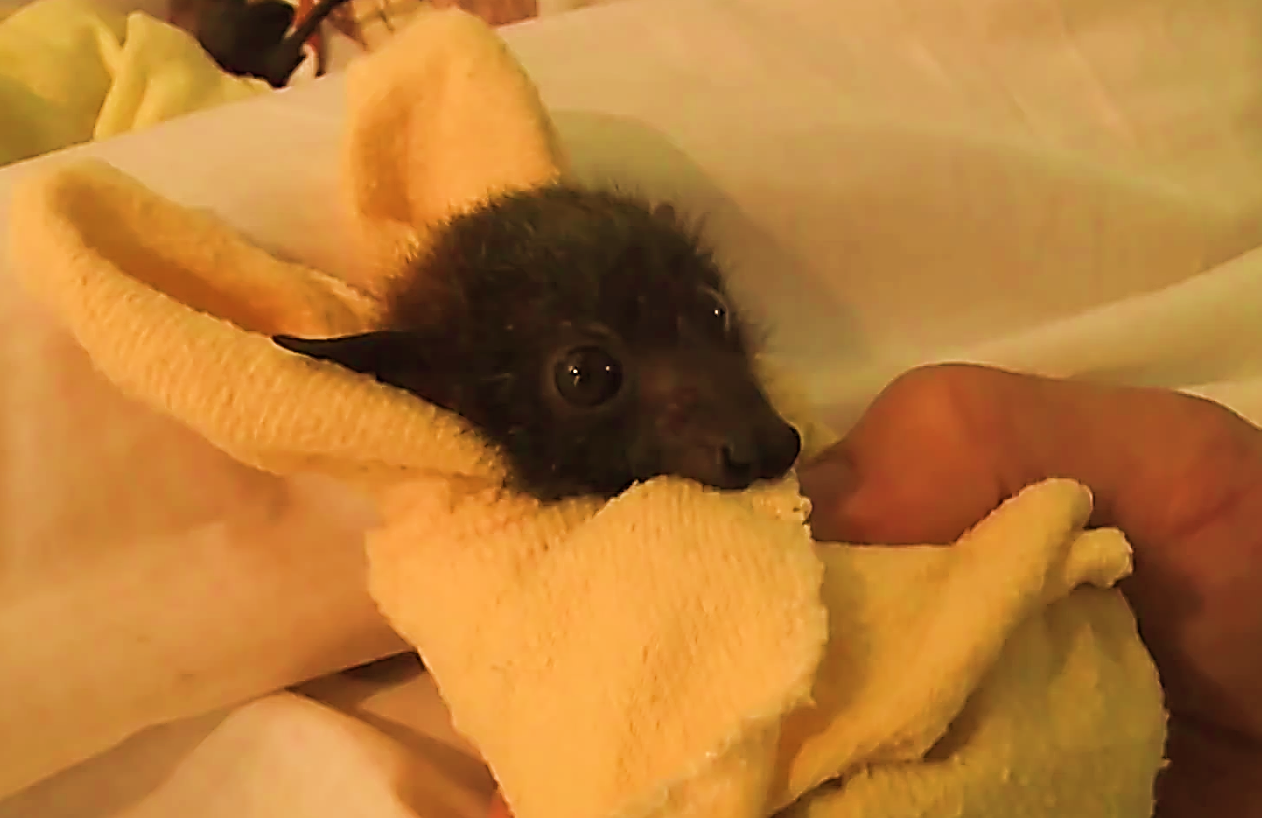 Are you still interested in learning more about bats?Learn more about Bats and Biodiversity here!

This page was authored by Tan Xiao Rui Joanna