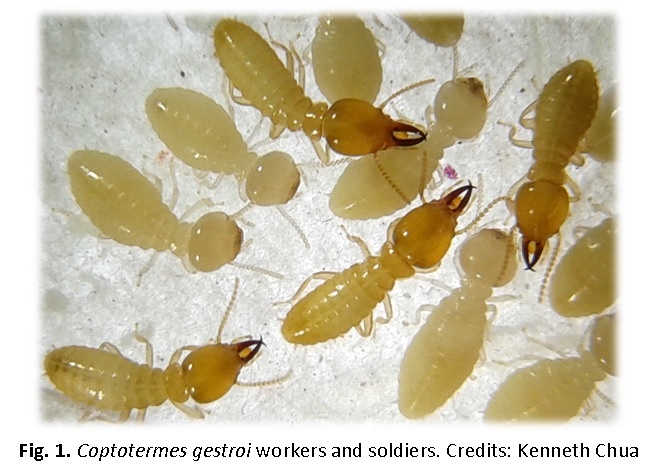 Termites are best known for being destructive pests of trees, wood and wood products. In terms of economic impact, termites of the genus Coptotermes are considered the most widespread and important (Gay, 1969; Su & Scheffrahn, 1990). Of the common genera of termites in Singapore, the most prevalent infestations are caused by Coptotermes, accounting for about 85% of the total, with Coptotermes gestroi (Fig. 1) being the most common species in buildings, structures (Kirton & Brown, 2003), and even in live trees. 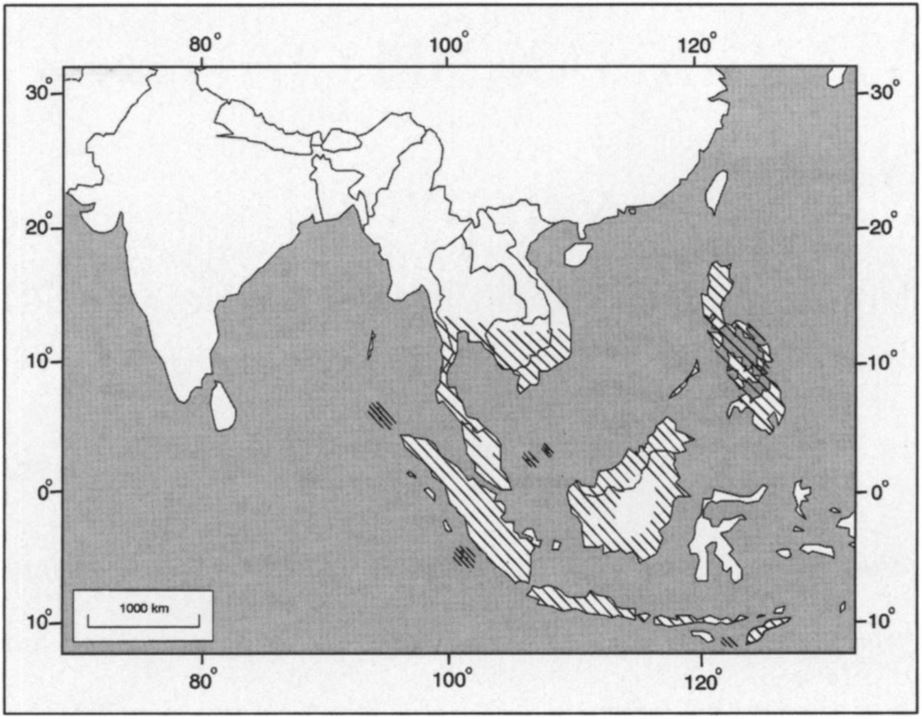 All Coptotermes species are best identified by a large opening known as the fontanelle on the forehead of the soldier (Fig. 3c). A white latex-like droplet is often secreted from the fontanelle when challenged (Fig. 3a). Superficially, C. gestroi soldiers have a reddish-yellow head shaped like a tear drop (Fig. 3b), with reddish brown mandibles that are curved apically (Fig. 3d). The legs and abdomen are pale white. Several other diagnostic features are apparent under microscopic examination. A pair of hairs occur at the rim of the fontanelle (Fig. 3e). In addition, there is a weak bulge just behind the fontanelle when the head is viewed laterally (Scheffrahn & Su, 2000). The antennae consist of 14 to 15 articles, with the second article longer than the third, and the third and fourth being subequal. The labrum is narrowly pointed with a hyaline tip that has a pair of hairs on it (Ahmad, 1965). The postmentum is long and about two and a half times as long as broad at the widest point, with the waist midway between the posterior margin and the widest point (Ahmad, 1965) (Fig. 3f). The pronotum is emarginate anteriorly, the margin being convex near the emargination (Fig. 3g). There is a slight depression in the middle of the posterior margin. 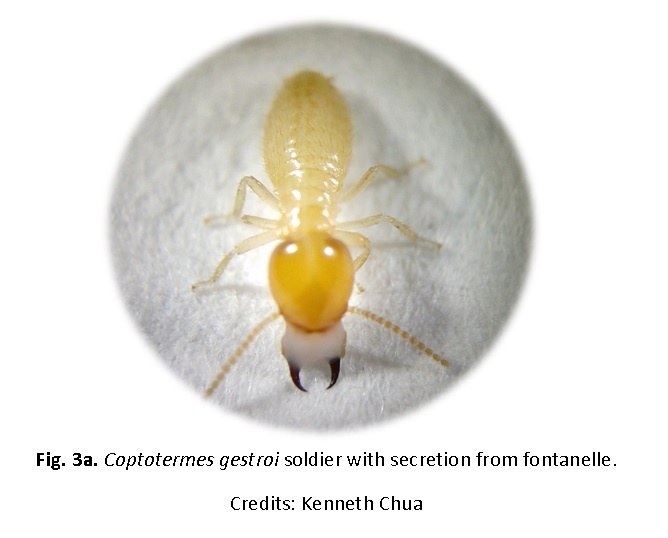 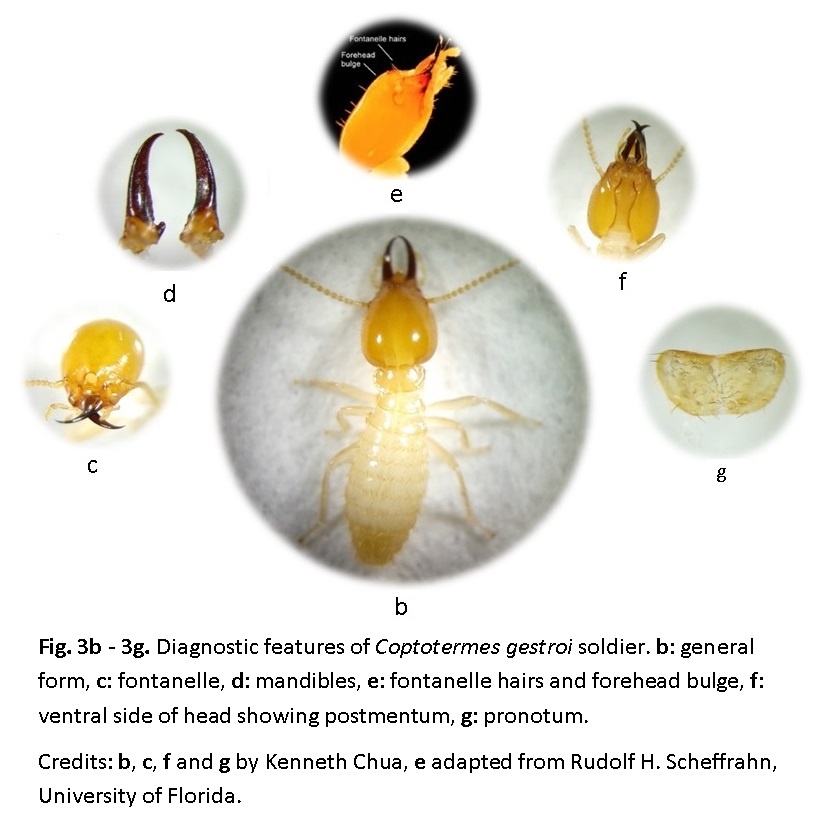 Alates (winged reproductives) of C. gestroi may also provide some form of identification. The wing length of C. gestroi alates is about 13mm to 14mm (Scheffrahn & Su, 2000). The head, pronotum and the dorsal side of the abdomen is dark brown (Fig. 3h). Two antennal spots are clearly visible on the face when observed under a microscope (Fig. 3i). 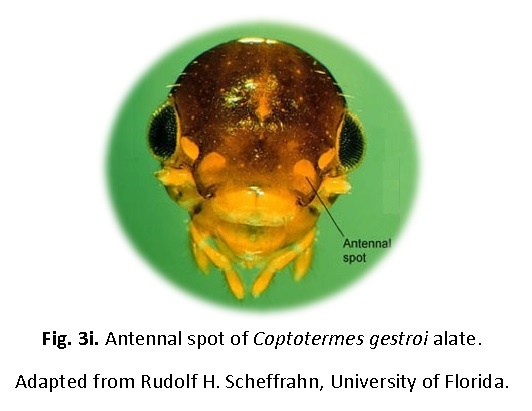 A new C. gestroi colony typically begins after a swaming event, where large numbers of alates leave their colonies in a dispersal flight. After landing on the ground and shedding their wings, the search for a partner begins. Females lead their partners to a suitable nest site where mating occurs and the first batch of eggs are laid by the new queen within a few days. The first instar larvae, cared for by the king and queen, may develop into either workers or nymphs (Fig. 4a, 4b) after the second molt (Albino & Costa-Leonardo, 2011). Nymphs can develop into alates after going through six instars (Albino & Costa-Leonardo, 2011), or into brachypterous neotenies that do not disperse but reproduce within the same colony (Vargo & Husseneder, 2009). Workers (Fig. 4c) may develop into apterous neotenies, remain as workers, or develop onto presoldiers that will ultimately form soldiers (Vargo & Husseneder, 2009). 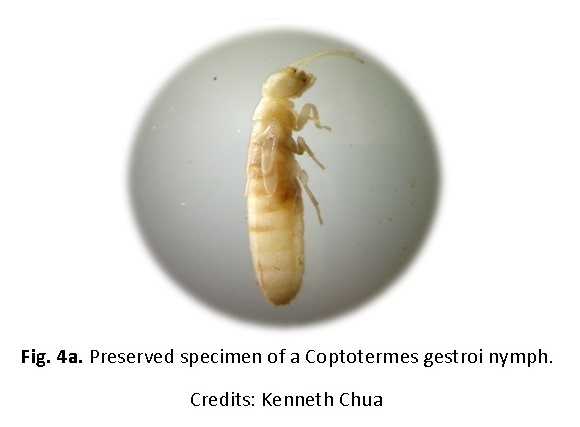 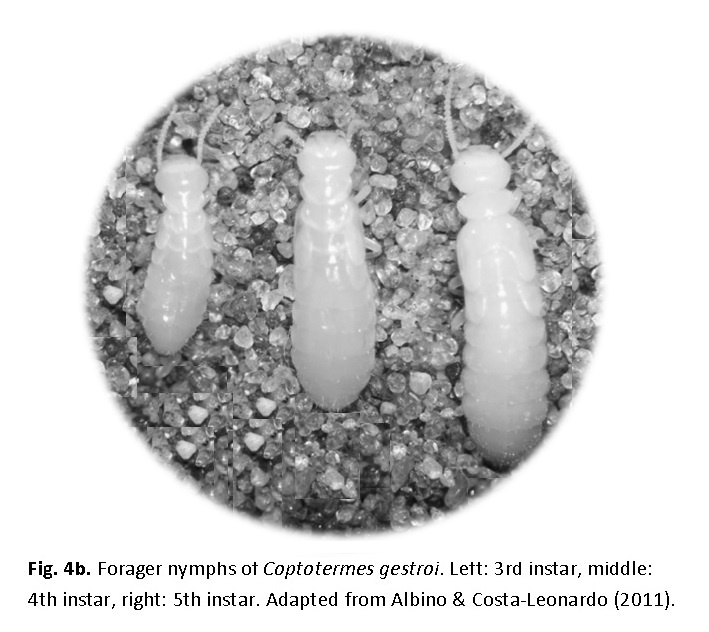 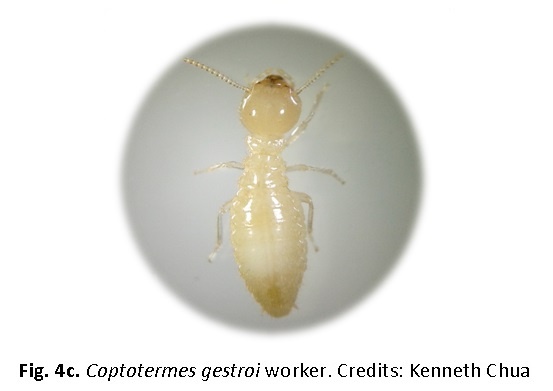 It should be emphasized at this point that the issue of the practicality of taxonomic ranking is not the focus of this section and hence will not be discussed. What is presented here is an outline on some of the recent changes or studies with regards to the taxonomic status of C. gestroi.

C. gestroi was first described by Wasmann (1896) using a soldier (Fig. 5a). In 1911, Nils Holmgren described C. harvilandi from an alate form of the same species. The difficulty of matching the two caste, together with various reports on slight morphological differences over time led to the establishment of two supposedly different species. Kirton & Brown (2003) have since synonymised C. gestroi and C. harvilandi, with the latter being assigned the junior synonym. Recently, C. vastator was also assigned as a junior synonym of C. gestroi after DNA sequence comparison of mitochondrial genes revealed their synonymity (Yeap et al., 2007).

Coptotermes is regarded as a transitional taxa between lower (with hindgut protozoa) and higher termites (without hindgut protozoa) (Vargo & Husseneder, 2009). This genus is also one of the largest within the Rhinotermitidae. However, much of the taxonomy within Coptotermes is still in need of revision, especially with regards to identifying primary pest species within the genus in Southeast Asia.

Of the 12 families within Isoptera (Krishna et al. 2013), C. gestroi belong to Rhinoterminidae, which are considered the most derived of the lower termites (Vargo & Husseneder, 2009). Several authors have attempted to build phylogenetic schemes for the most widely accepted families (Fig. 5b) and some have shown that Rhinoterminidae is possibly paraphyletic with members in Termitidae (Lo et al., 2004; Legendre et al. 2008). 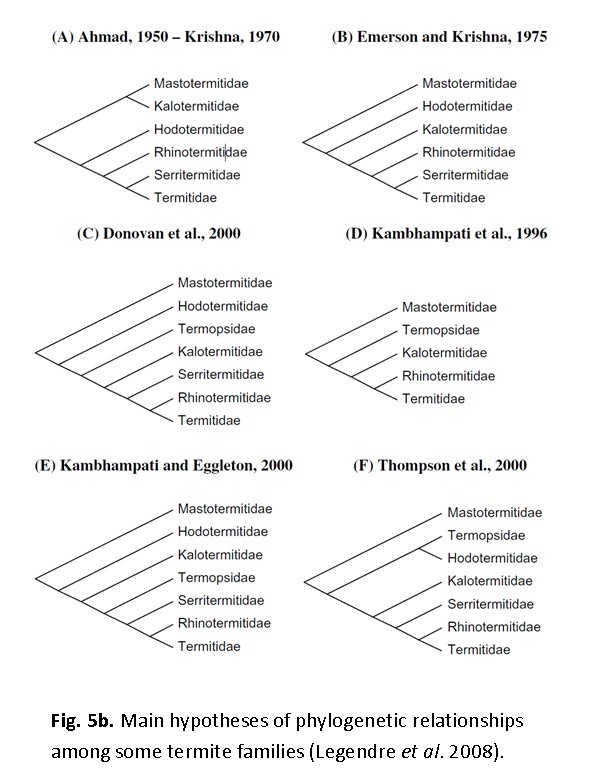 Termites, although frequently (and mistakenly) referred to as "white ants", are more closely related cockroaches (Blattodea) and mantises (Mantodea) than to ants (Hymenoptera). Termites, cockroaches and mantises form a well-established lineage known as the Dictyoptera, characterised by a perforation in the tentorium (the internal skeletal part) of the head and enclosing their eggs in an ootheca (specialised egg case) (Inward et al., 2007). There had been much debate on whether termites are essentially cockroaches. Although termites were known to be possibly a type of cockroach, they were widely accepted to be of an independent order Isoptera until Inward et al. (2007) confirmed that termites are indeed eusocial cockroaches and should not be considered as a separate group from the latter. Inward et al. (2007) also proposed that the order Isoptera should no longer be used and species within be reclassified in the family Termitidae as a subordinate taxon of the order Blattodea, within the superorder Dictyoptera. Such a proposal to dramatically downgrade all taxa within Isoptera became a concern among other authors who viewed it as an unnecessary taxanomic chaos, especially with considerable uncertainty among various cockroach lineages yet to be resolved as well (Lo et al., 2007). It has since been proposed that Isoptera be retained as an infraorder within the order Blattodea (Krishna et al. 2013).

This page was authored by Chua Boon Kee Kenneth