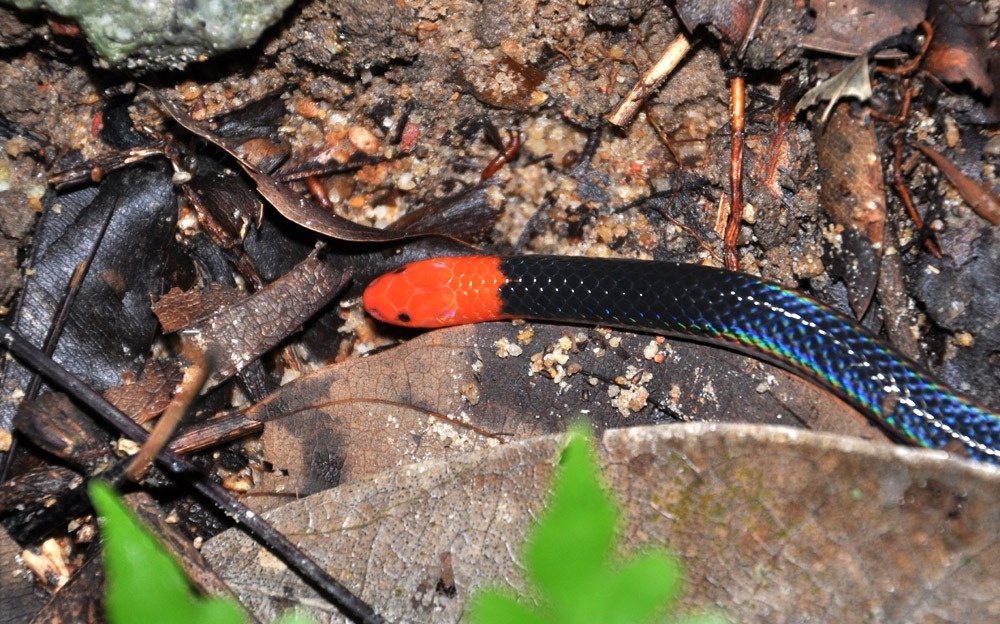 Etymology:
Calamaria schlegeli was named in honor of a German herpetologist, Hermann Schlegel (1804 -1884). It is commonly coined as "reed snake" due to the cylindrical shape of its body2 .

The Pink-headed Reed Snake (Fig. 2), which is not known to be venomous, bears a high resemblance to the venomous Malayan Blue Coral Snake (Calliophis bivirgatus) (Fig. 3). Both species generally have a bright pink/red head and a dark-coloured dorsum 3 . The small-sized Pink-headed Reed Snake (about 45 cm) is much shorter than the medium-sized Malayan Blue Coral Snake (about 1.85 m) 4 , but it can get confusing when encountered with juveniles. Their high resemblance, coupled with similar habitat range, makes it easy to confuse the two species for each other.


Look out for the red tail and bright blue stripes on sides of the belly. The Pink-headed Reed Snake (Fig. 2) does NOT have these two features, they belong to the Malayan Blue Coral Snake (Fig. 3) 5 . 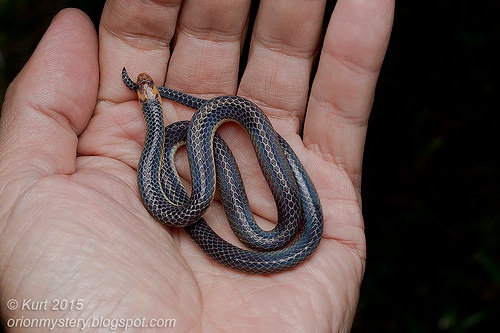 Juveniles look similar to the adults, except that black bands are present on the posterior half of the belly 2 .

As a result of its relatively-variable forms, the Pink-headed Reed Snake has numerous synonyms 9 :

The Pink-headed Reed Snake is commonly considered as non-venomous6 11  and as a member of the genus Calamaria, its bite is believed to be harmless 12 . However, an entry documented in the Singapore Biodiversity Records (Get paper here) reveals that the snake may not be as harmless as popularly believed.

The venomousness of the Pink-headed Reed Snake thus requires further investigation. Nonetheless, being small and secretive, the species is more likely to flee than attack, if not under threat. A good guide would be to stay away rather than confront it.

It is known that the Pink-headed Reed Snake consumes frogs, small invertebrates (such as slugs 4 ) and small insects 14 . In addition, the species is oviparous, i.e. egg-laying, but its clutch size remains unknown 15

However, all the aforementioned countries or regions are reflected in the current IUCN distribution map with the exception of Thailand (Fig. 9). As such, its presence in Thailand is uncertain.

The habitat of the species ranges from forests (both lowland and highland) to agricultural fields, gardens, road-cuts and paths. It is also known to hide under stones, logs, or leaf litter 22 .

Video of the Pink-Headed Reed Snake at night in Singapore below (Video permission and credit: Lou Boyer):

The existence of the Pink-headed Reed Snake does not appear to be under threat at present.

Last assessed on 1 September 2011 by IUCN, the species is a Least Concern species due to its widespread presence and lack of major threats. It is also found within protected areas 16 .

The species is also not listed in CITES or the Singapore Red Data Book.

There are currently no genetic data available for the Pink-headed Reed Snake. Check the National Centre for Biotechnology Information (NCBI) database for more updates.

This page was authored by Jasline Ng