Meet striated heron, the fisherman bird! Equipped with a natural fishing rod (a long extensible neck) and bait (sometimes), this patient bird is commonly seen on Singapore beaches, canals, ponds and lakes waiting patiently for fishes1 . Below is a video of the ‘fisherman behaviour’ of the striated heron! 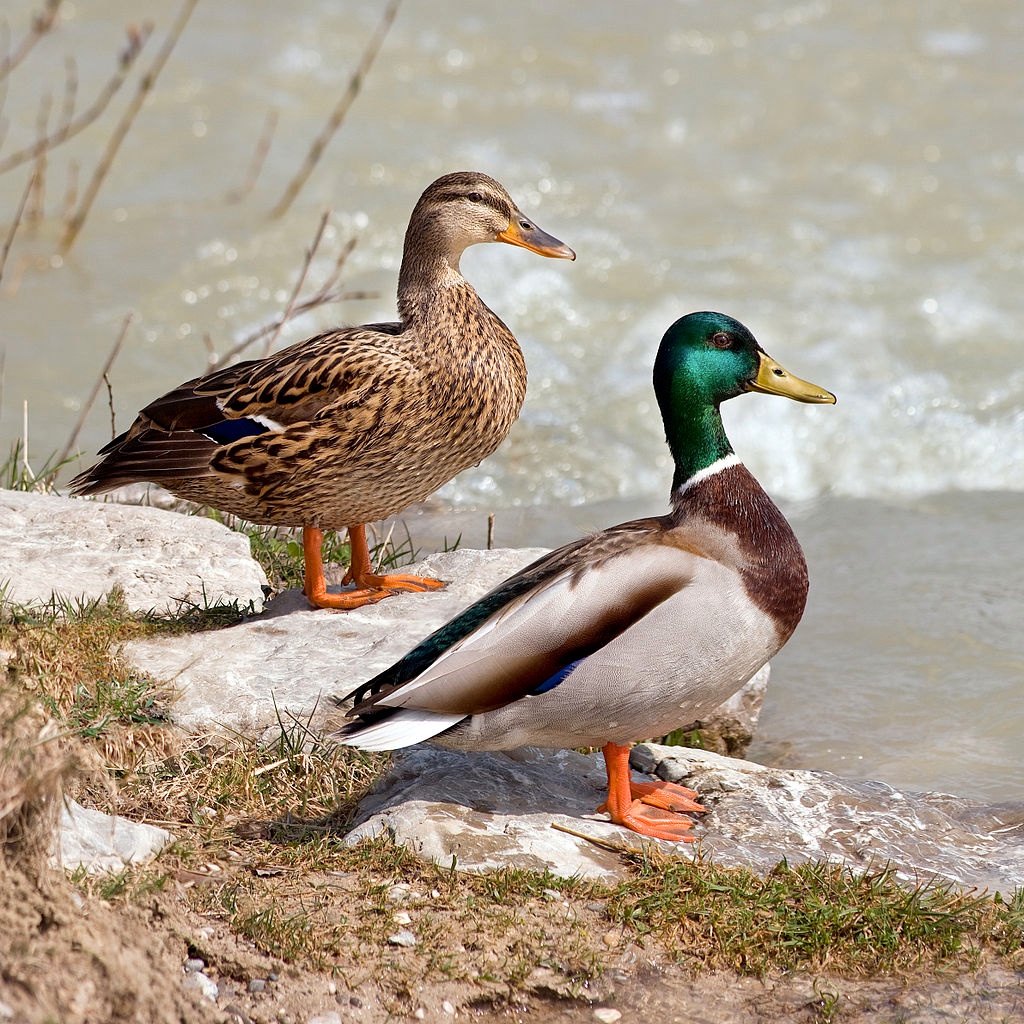 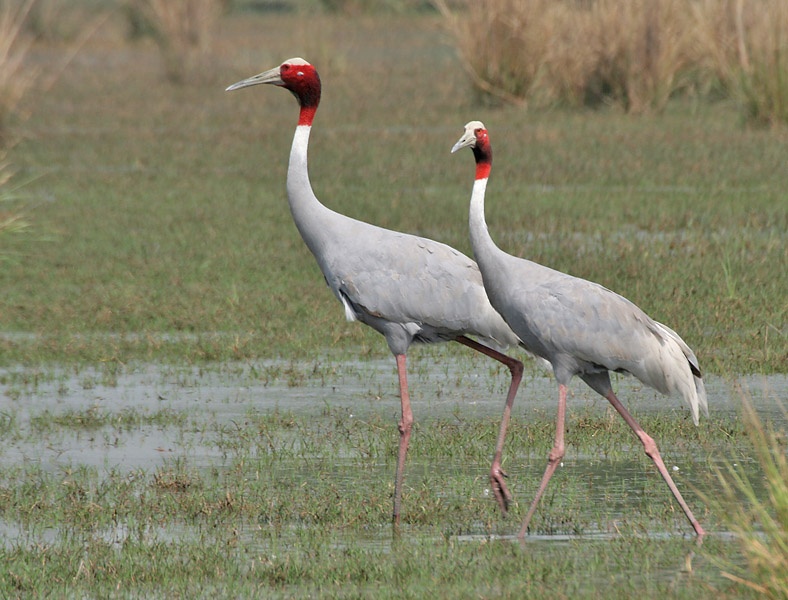 b) “It has a short neck.”
Most of the time, the neck of the striated heron is retracted and looks short. However, this bird is capable of stretching its neck to extreme lengths. 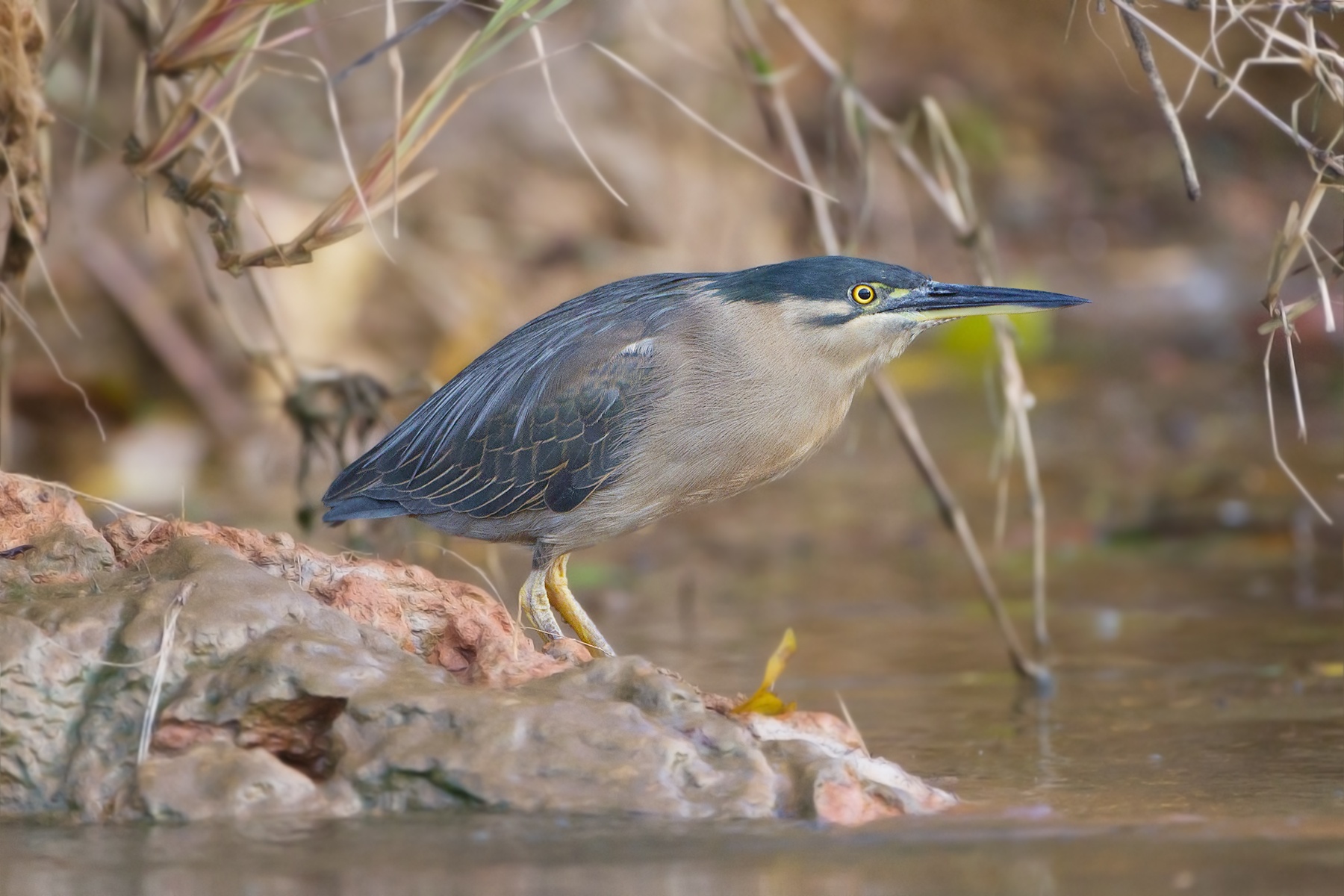 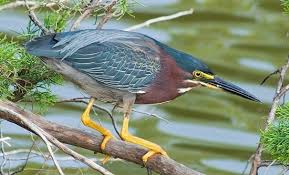 c) Diagnostics (Comparison with other small herons found in Singapore)5 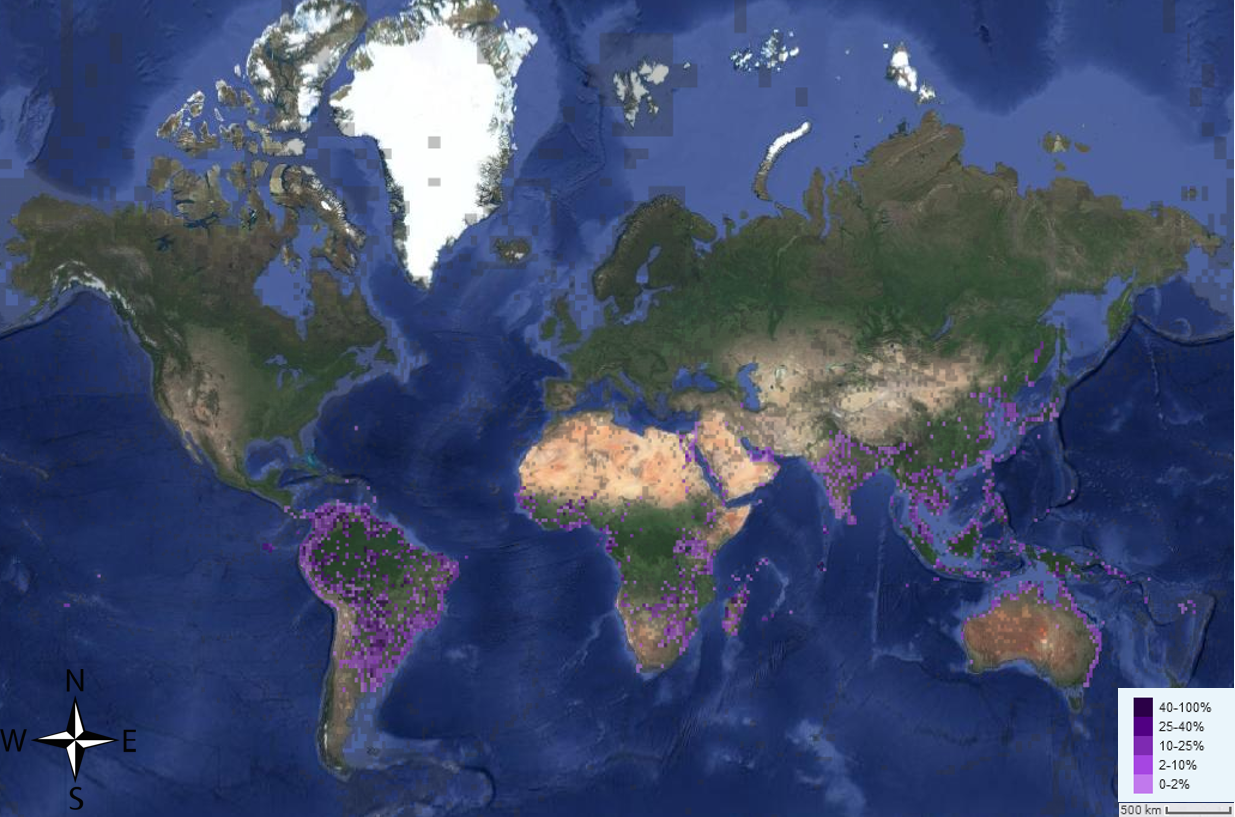 The continental range of striated heron includes South America, Africa, Asia and Australia where mangroves and swamps are relatively abundant8 . As aforementioned, striated herons and green herons have been split. This distribution data accounts for the post-split.

Singapore sightings
♦Striated herons are one of the most common small herons in Singapore9
♦It is spotted near any substantial water body in Singapore
♦Striated heron hotspots: Sungei Buloh Wetland Reserve, Kranji Marshland, Marina Barrage, Gardens by the Bay, Seletar Dam and Lorong Halus

Where to find
1. In and under bushes next to pools and watercourses
2. Marshland or similar open areas

From cradle to grave, this section looks at the life cycle and biology of the striated heron in three parts:
(a) Courtship and nesting
(b) Egg and chicks
(c) Matured individual’s behaviour

(a) Courtship and nesting

During courtship, striated herons pairs are known to exhibit several behaviours which include♦ circle/pursuit flights
♦ crest raising by male
♦ calls such as “skow” by males and “coos” by females
♦ snap & stretch and side-side sway paired displays10 .

If successful, both male and female will construct the nest together. Nesting usually happens in pair but sometimes nesting family groups are seen. During nesting, both parents are known to protect the nest. When threatened, the parents warn the aggressors by making alarm calls with extended neck, erected crest and raised body feathers11 . The chance of successful nesting is only 39%. This is due to climacteric factors such as storms and high tides or predation of eggs and juveniles12 .

b) Eggs and chicks

Upon completion of nests, 2-5 pale green-blue eggs are laid, and incubated by both male and female adult herons. The eggs are incubated for around 22 days before hatching while the whole hatching process takes about 3-4 days. Striated heron eggs are also known to hatch asynchronously – each hatching at a separate time. The chicks hatched are semi-altricial (Semi-dependent on parents) but it takes only one week for the chicks to become precocial (Independent). After a mere 14 days, chicks are seen leaving their nests10 .
Both the eggs and juveniles are threatened by predation from the following11 :♦Crows (Corvus sp.)
♦Water dragon (Varanus sp.)
♦Grey shrike-thrushes (Colluricincla harmonica)
♦White-bellied sea eagle (Haliaeetus leucogaster) 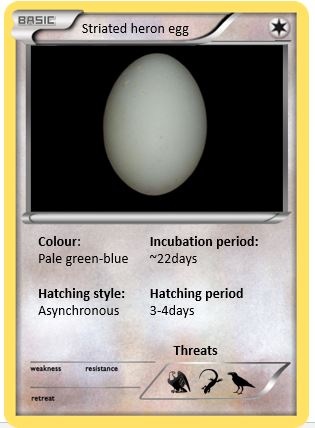 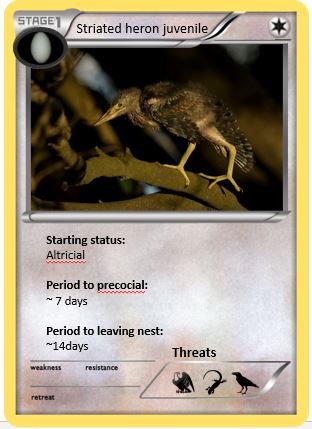 The most common strategy employed is standing where the striated herons stands in a crouched waiting position next to or near shallow waters. While waiting, the body is held parallel to the water and maintained for 29-42 minutes before executing a successful strike. The strike involves extending its neck and lunging its head into the water to snare prey10 .

To improve their chances of snagging a prey, baiting is sometimes employed. Striated herons are known to use plant matter, captured insects, or even, leftover waste scraps to bait their prey. This mode of foraging is also seen in several members of the Ardeidae (heron) family – including the green heron sister species1

Here’s another video of the baiting behaviour of striated herons! This time with a catch :)

The less common hunting strategy of walk-fishing is sometimes employed. This strategy, although less intriguing, is therapeutic to watch. The walking speed of striated herons when hunting are known to be very slow. A published article has shown that it takes 30 seconds for an individual to just lift up a leg10

ii) Other behaviours
ThreatenedWhen threatened, the striated heron either remains motionless and slowly turns its face towards the intruder or it clambers out of the nest to climb onto a branch or leap into mud/water11
Vocalisation14
Not a vocal bird, striated herons rarely call. More common events for calling include
♦Courtship (utter sneezing “tch-ahh” and explosive “hoo”)
♦Startled (“kew kew chit chit kew”)
♦Flight (chuckling)

Not a threatened bird in the world, the large range, large population and slow population decline have placed striated herons under the “Least Concern” category in IUCN.

However, striated herons still suffer from anthropogenic threats such as human disturbance, pesticides and habitat destruction. In some countries, the striated herons are consumed as food15 .

*Disclaimer: While ranks (eg. Kingdom, Phylum) are not informative, Taxon names (Animalia, Chordata) provide us with information on the characteristics of the species nested within. The usage of ranks is strictly for convenience.

b) Nomenclature
i) Original description
B. striata was first described by Linneaus in 1758 under Ardea striata16 . The text is given below:

The Latin text briefly translates to:
“Back gray-striped, ferruginous under the neck, apex of secondary remiges white”
Another subspecies was described in the same page which translates to:
“Remiges dark tans, but secondarily margin white tips”

iii) Etymology (Origin of words)
Species epithet, striatus, refers to the streak plumage of immatures11 .
For the same reason, its common name “striated heron” has widespread usage. However, some birdwatchers prefer the name “little heron” as adults do not always show ant forms of striation.

This species page assigns the name “Butorides striata” to the striated herons found in the southern hemisphere (including Butorides striata sundevalli from Madagascar). Butorides virescens, green heron from North and Central America, is classified under a separate sister species20 . The rationale for this is given below.

Following Linneaus, the name B. striata was used for all three types of striated herons, B. virescens, B. striataand B. striata sundevalli.

Later in 2003, the American Ornithologists' Union proposed a further split of B. striata to B. striata and B. virescens16 . This was based on works of Monroe and Browning (1992). There were low hybridisation rates and assortative mating between the two species in Central Panama (where they occur in sympatry)23 . As the split was based upon reproductive isolation, it implies the usage of Biological Species Concept. 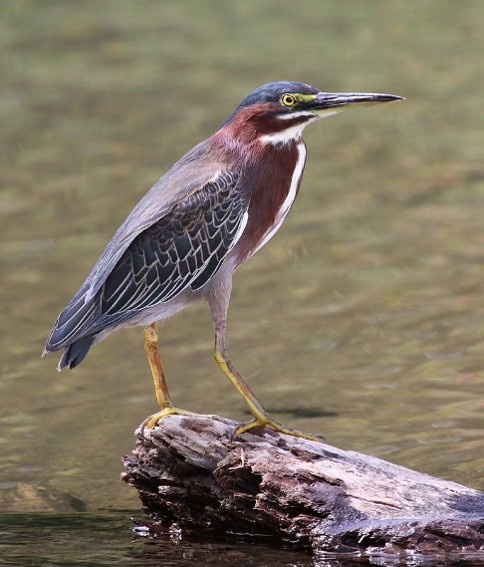 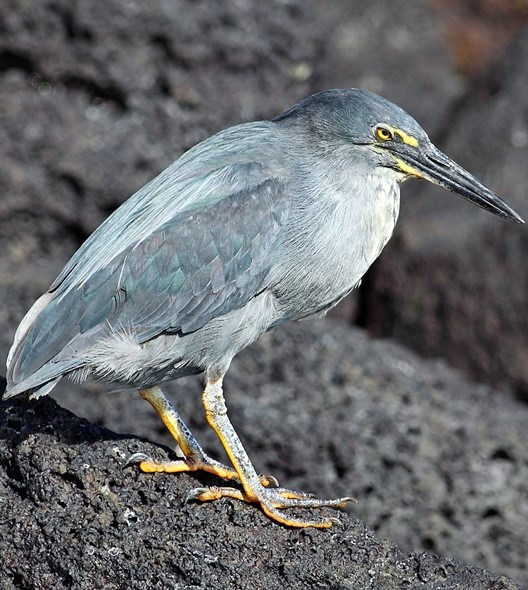 i) Position of B. striata in Aves
Phylogenetic analysis by Hackett et al. (2008) based on Maximum Likelihood Analysis places Butorides(Genus of B. striata) is nested within Ardeidae25 . Maximum likelihood analysis by Jarvis et al. (2014) then showed that Ardeidae, in turn, belongs to a clade called Pelecaniiformes of the Aqueornithia (Core water birds clade)26 .

ii) Splitting within Butorides clade
The phylogenetic tree proposed by Huang et al. (2016) suggests that B. virescens and B. striata are sister species with high bootstrap support = 100. The phylogenetic tree was based upon 652bp CO1 sequences and used neighbour joining and maximum likelihood analysis as the optimal tree criteria. While Huang et al. (2016) only shows the NJ bootstrap support for the tree, the paper notes that the obtained trees using NJ and MLA were similar. With high node stability (from NJ) for the branching of B. virescens and B. striata, it would probably also appear as a stable node in MLA27 .

iii) Uncertainty of clade positions in Ardeidae
Despite recent molecular advancements, the relative positions of clades within Ardeidae have yet to be properly defined. Seen in the phylogenetic tree from Huang et al. (2016), the nodes separating the clades in Ardeinae are cluttered together, indicating rapid speciation and possibility of polytomy26 . In a separate baynesian and maximum likelihood tree (using complete mitochondrial DNA) by Zhou et al. (2014), the node stabilities for Ardea, Butorides, Nycticorax and Egretta are weak (below 80% based on maximum likelihood)29 . Both phylogenetic trees indicate that more work has to be done in this field to properly resolve the relationships of clades within Ardeidae.

The subspecies table below excludes
B. s. virescens (which the page considers a separate species, B. virescens, as per discussion above)31 .
The subspecies Butorides striata javanica* occurs in Singapore.

Google spreadsheet of B. striata subspecies and their location.


f) Type specimens
The available information of holotypes are B. striata subspecies. Also, no neotype has been assigned according to GBIF as of 11th Nov 201632 .
Type specimen for Singapore's subspecies B. s. javanicus can be found in National Museum of Natural History, Smithsonian Institution. It was collected from Langkawi Island, Malaysia33 .

7. Other information on striated heron

♦Most records for striated herons in Singapore are pictures or videos on birding groups such as Bird Ecology Study Group or Bird Sightings
♦Skin specimen of striated heron can be found on display in Lee Kong Chian Natural History Museum.
♦Wee & Wang, 2009, provides the only known Singapore documentation of striated heron in captivity. The record includes the behaviours and characteristics of a rescued striated heron chick for over a year. See more here34 !

b) Parasites and viruses

♦Cestode parasites:
Cestode parasites are common in striated heron's digestive systems. In a recent study, seven trematode species were found in the oral cavity, small intestines and cloaca of a young striated heron35 . The numbers can go up to 16 parasites. Striated heron is known to have a greater richness of parasites compared to other birds. On average, Aves birds only host three cestode parasites36 . This may be attributed to striated herons' diverse diet and proximity to aquatic habitats.

This page was authored by Tok Wei Xian Eugene