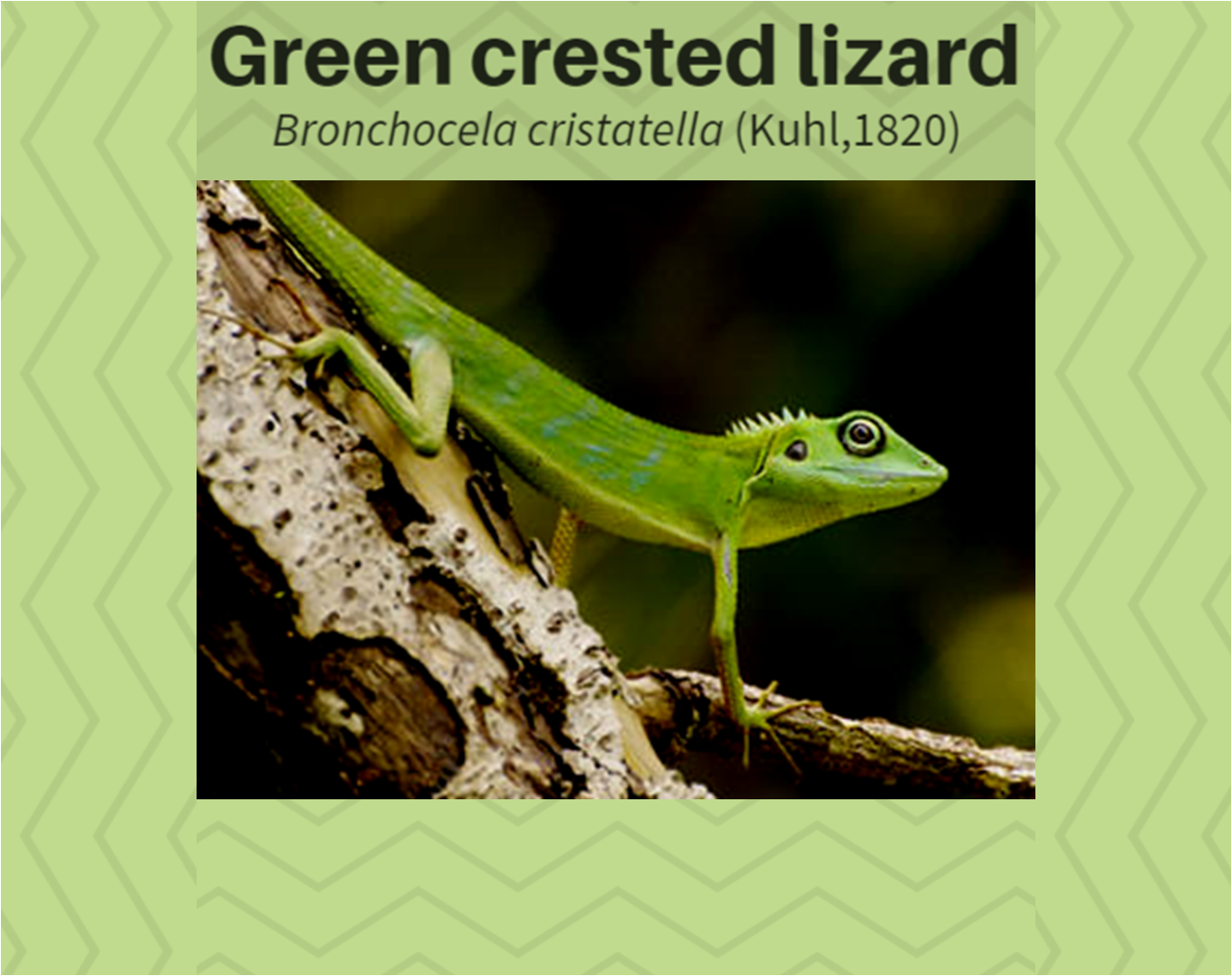 Fig. 1: A green crested lizard perching on a branch. Image by ©Nick Baker, from Ecology Asia, used with permission.

The green crested lizard (Bronchocela cristatella) (Kuhl,1820) is native to Singapore and endemic to Southeast Asia [1,2]. It is also the only officially recorded species in the Bronchocela genus in Singapore 1 . In the recent years, it has allegedly faced competition by the Changeable lizard (Calotes versicolor) (Daudin, 1802) which was introduced in the 1980s and now its distribution is restricted to forested areas of Singapore, while the latter occupies urban park localities 1 2 3 .

These diurnal green crested lizards are arboreal and frequently found resting or climbing tree trunks in forested areas4 5 .The family Agamidae is known for distinctly long tails, as seen in their diversity in different biogeographic regions6 . Green crested lizards exhibit these characteristics and also display interesting behaviour and morphology that allows the laymen to identify it easily7 1 .

While many may be familiar with the common house gecko as a "lizard", there are many other lizards with much more exciting behaviour, novel patterns and colouration1 7 . Lizards belong under Suborder Lacertilia, with infraorders Iguania and Gekkonidae8 . Lizards can be classified according morphology, molecular data as well as their habit or other behaviour such as colour change9 7 .

3. How do we identify them?

Lizards in the genus Bronchocela are known for their long tails. For the green crested lizard, the tail makes up 75-80% of the body length7 5 . Important features to look out for include large and easily identifiable characteristics on the head (Figure 4a) and overall body characteristics that allows identification from afar1 7 .

[3.2] Confusion with other species

This species is sometimes confused with Calotes versicolor at one glance7 1 . Characteristics such as black ear and eye-ring, together with defined nuchal crests make quick identification easy1 7 . Other chracteristics such as colour change and egg shape can also be helpful in providing evidence for identification7 1 . If specimens are at hand, more detailed measurements of snout to vent length and body length will be obtained for more rigorous identification exercises, especially in the case, where scientists suspected that they have found a new species11 12 . 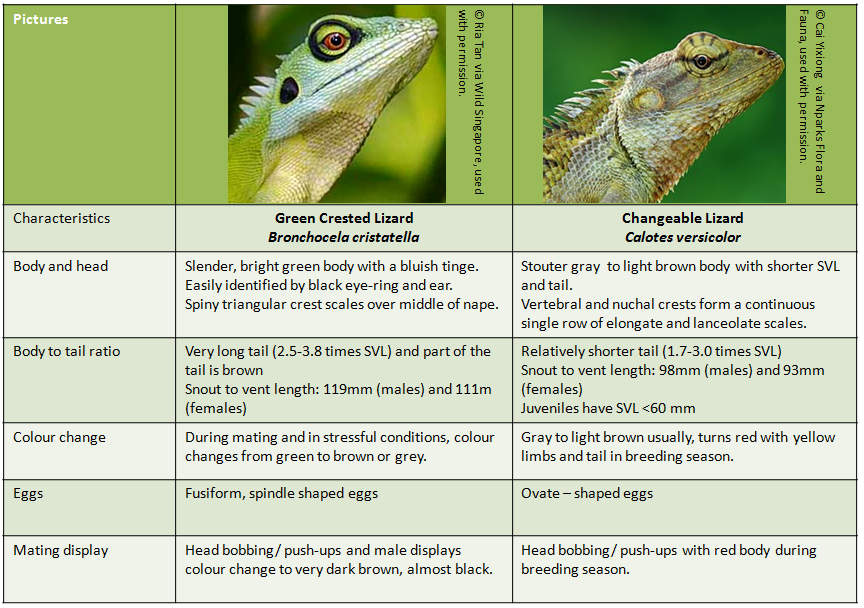 Das, I. (2015). A field guide to the reptiles of South-East Asia. Bloomsbury Publishing.

and images from © Ria Tan via Wild Singapore 13 ,used with permission and from Nparks Flora and Fauna according to user guidelines. Refer below for more detailed identification. 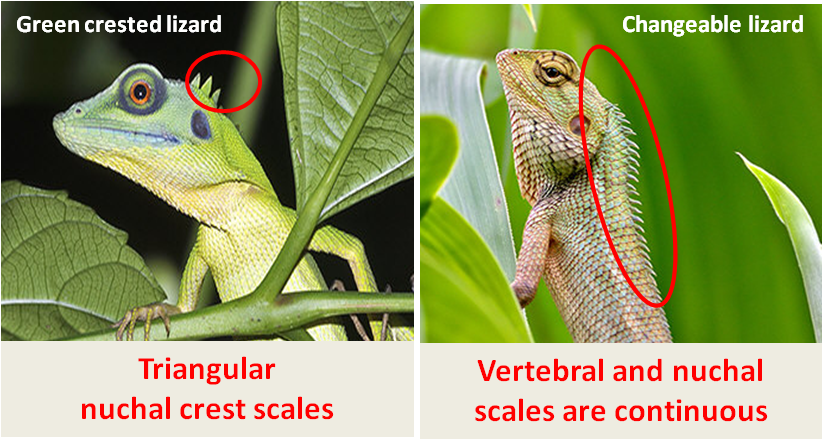 Fig. 7: Snout to vent lengths as compared to tail lengths for Bronchocela cristatella and Calotes versicolor. Both images from ©Nick Baker via Ecology Asia, annotated by Cheryl Leem.

Fig 10a and 10b: Differences between mating colouration change and colour of throat between the green crested lizard (Bronchocela cristatella) and the changeable lizard (Calotes versicolor). Images from Quah et al.,20124 , used with permission and from ©Nick Baker via Ecology Asia, annotated by Cheryl Leem.

Both the green crested lizard and the changeable lizard undergo colour change in the breeding season14 4 5 7 . The green crested lizard turns dark brown and displays an orange throat pouch while the changeable lizard turns from light grey to reddish with a red and black throat4 . Such colour changes only appear in males and are part of a display to attract females to mate with them4 .

Head-bobbing of these lizards can be observed when the males are trying to attract the attention of the females15 4 . The mating display also includes male erection of the nuchal crest while the throat pouch inflates4 .

Just before mating, males turn brown, almost black and display their orange pouch prominently4 . Males then hold females by the neck and mount them, while females remain bright green4 . Green coloration returns to the male's body when mating ends after 30 seconds, or 45 seconds after courtship and mating4 .

The green crested lizard can be found mainly in Southeast Asia, including Malaysia, Indonesia, Thailand, Myanmar and the Philippines7 9
B. cristatella is being traded as a pet15 . This species can be found in many pet stores, especially online pet stores that export oriental lizard species in the region16 . Large terrariums with natural greenery are constructed with suitable temperature and humidity to maintain them as pets [5]. It is not protected under CITES15 .

It can be found in forested areas in Singapore such as the Central Catchment Nature Reserve, Sungei Buloh Nature Reserve, Bukit Timah Nature Reserve, Botanic Gardens and Pulau Tekong. An individual was also spotted at the foot of S1A building at NUS Biological Sciences (pers. obsrv.). They are listed as "Uncommon" by the Lee Kong Chian Natural History Museum17 . While there is almost no evidence to show that Calotes versicolor is the reason behind the decrease of Bronchocela cristatella, it has been found that the former species has caused extinctions of skinks on the Mascarene Islands18 19 20 . 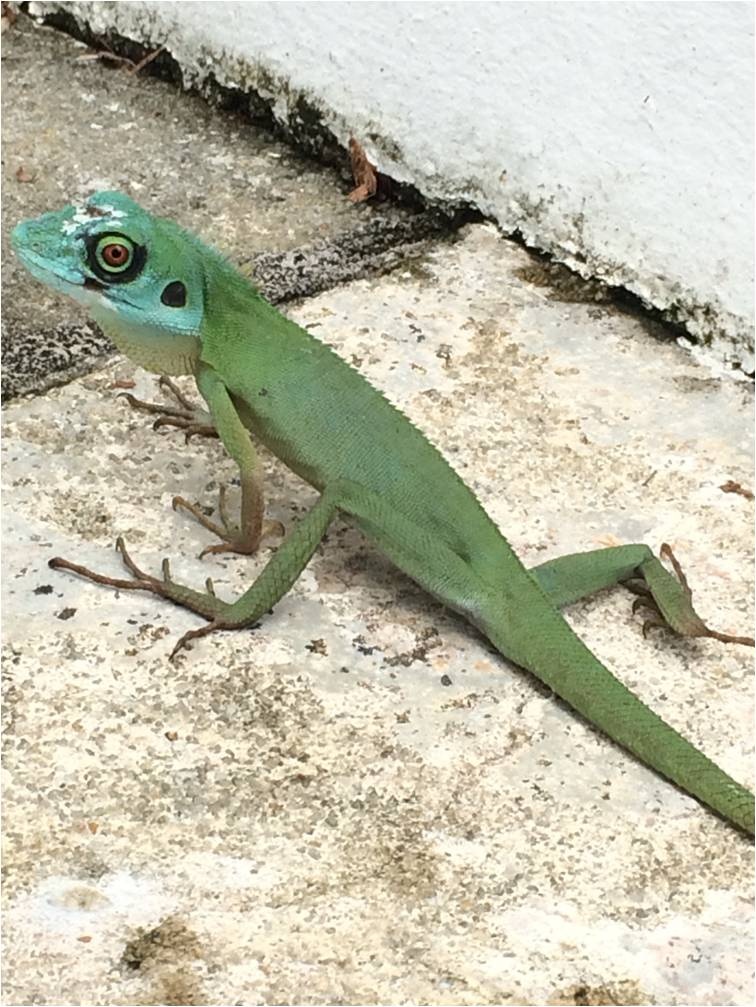 As it is an aboreal lizard, it lives and forages among the trees7 . However, alleged competition with the Changeable Lizard (Calotes versicolor) in possibly the same ecological niche has made it harder to spot in urban green spaces4 7 . The Changeable Lizard can be mostly found in parks while the Green crested lizard can be found in more protected areas21 3 .

Individuals are expected to live more than 10 years16 . After mating, these oviparous lizards lay eggs in the external environment, which hatch to give the young16 .

Figure 14 a and b: Snapshot taken from Youtube according to user guidelines and identification chart used with permission from Walters, D.S., USDA (2011)22

Females lay fusiform eggs in the soil in groups of 2-4 eggs at once in soil23 7 1 . These eggs require 60-70 days of incubation before hatching15 . These fusiform eggs are different from eggs of Calotes versicolor that are ovately shaped, which are laid in clutches of 19-4024 25 26 .

7. Ecological interactions with other animals

Green crested lizards feed on a wide variety of prey that are mostly insects, including ants, beetles, cicadas, crickets, flies, grasshoppers, stick insects, etc.3 2 15 . Eating incidents have been infrequently observed because the Green crested lizard eats and swallows its prey within seconds. At times, it has been observed to also feed on skinks.

They are in turn predated upon by snakes including the elegant bronzeback, Kopstein's bronzeback and the Paradise tree snake and also the leopard cat27 28 . However, green crested lizards are not only predated upon by large predators; their bodies are are fed upon by weaver ants when they die.

Common names include the green crested lizard, Borneo-Langschwanzagame (German) and Blutsaugeragame according to GBIF

Synonyms are scientific names that actually refer to the same group. Synonyms arise when earlier names are shown to be erroneous and the same specimen is instead allocated to a new name as its features are deemed more similar to a new group.

Bronchocela cristatella used to be named firstly as Agama cristatella by Kuhl in 182029 9 . However, over the years, the species changed names multiple times owing to re-categorisation30 9 . The original description by Kuhl (1820) based on type specimens deposited in the Paris Museum, but the type locality was not given31 . Kuhl's holotype was lost and this mystery was unresolved until in 2000, when Das and his team managed to show that three syntypes at the Museum National d'Histoire Naturalle Paris (MNHN) under the name Pseudocalotes archiducissae Fitzinger, 1860 (Fig. 19), fulfil the original description by Kuhl, and thus show that those were the type specimens that the original description was based on32 . It was also revealed that the synonym Pseudocalotes archiducissae was never a valid name under the International Commision on Zoological Nomenclature (ICZN), for there never was a proper description published by Fitzinger32 .

Identification keys are usually dichotomous, meanng that each point describes two possible logical alternatives, one of which is chosen7 . This eventually leads the reader to determine what species or genus a particular specimen belongs to7 .

In a phylogenetic analysis using mitochondrial DNA, the family Agamidae was found to be strongly monophyletic33 . This tree also shows that Bronchocela cristatela is distinct from Calotes versicolor, with strong node support with bootstrap values, which further shows that apart from morphological confusion, sequences show that they are rather disparate species with a distant common ancestor33 . [9.2] Phylogenetic relationships with other species in genus Bronchocela

Phylogenetic studies of Bronchocela species have been done to accurately reveal the taxonomy of this genus. Habitats of different elevation (e.g. highlands as compared to sea level) are speculated to host different species of Bronchocela. Grismer (2011) mentioned that a population in Bukit Larut, Perak in montane forests at high elevations(Bukit Larut, Parit Falls) differ significantly from other Bronchocela cristatella specimens collected. This turned out to be a new species of Bronchocela shenlong, named after a mythical Chinese dragon that lives high up in the mountains5 34 . Another species discovered is Bronchocela rayaensis, found only on Pulau Langkawi, which has seen increasing reports of endemic fauna.

From Fig. 24, five main characteristics have been reported between these species. B. rayaensis has negligible nuchal spines, resulting in a lower nuchal crest while B. shenlonghas a higher nuchal crest, relative to B. cristatella. While B. cristatella is known for its black typanum, both new species have green typana, with B. shenlong having one that is smaller than half the diameter of the orbit. While differences in external appearance hint at the presence of different species, genetic analyses are often needed to verify these hypotheses5 . Additional studies have confirmed these new species of Bronchocela, thus increasing the total number of species to 1235 12 . However, an important caveat here was that only 2 specimens per new species were studied for these morphological differences, while 73 specimens contributed to the overall data on morphometrics of B. cristatella12 . More rigorous sampling or a higher number of specimens showing consistent differences would have strengthened these claims of new species.

One important implication of this new discovery is that B. rayaensis and B. shenglong are new species that might have been previously recorded as B. cristatella11 12 . This can affect the integrity of previous studies and morphological records of "Bronchocela cristatella", which was in fact a species complex (group of multiple species with similar morphological characters that are roughly categorised of one species)11 .

Other information provided in the study was a brief speculation on the possible reproductive period. Females that were gravid were seen at different times of the year: May (for B. rayaensis) and June- November (B. shenlong). If the reproductive seasons were indeed as observed with no overlaps, then cross-breeding between species would not be possible thus obstructing gene flow between these two species, which can lead scientists to conclude that they are tentative Biological Species as reproductive isolation has been achieved12 .

1. Arboreal: refers to lizards which carry out most activity on trees and usually live on trees.
2. Biogeographic regions: different geographic regions that also host different types of species owing to different environmental conditions.
3. Courtship: procedures and rituals that the males and females engage in before deciding to copulate with each other.
4. Diurnal: exhibiting activity in daytime and sleeping at night. Opposite of nocturnal.
5. Endemic: being restricted to and is only found in a specific geographic range.
6. Morphology : the study of the form, shape or configuration of the organism.
7. Oviparous: used to describe an animal that lays eggs externally and minimal development of young occurs internally of the mother.

Morphology – related
1. Iris: the part of the eye ball that surrounds the pupil.
2. Lateral margins: the outline of the eye ring
3. Nuchal crests: the nuchal crest is made of the nuchal spines on the back of the neck
4. Gular fold/ dewlap: a transverse fold of skin
5. Snout to vent length: main body length from the pointed tip of the snout to the base of the tail of the lizard. Used as a main descriptor for morphology.
6. Tail length: length of tail which is also the length of the body that is not the snout-to-vent length. (TL = BL – SVL). Used as a main descriptor for morphology.
7. Throat pouch: inflatable sac located at the throat. Used for mating displays.
8. Tympanum : membrane leading to the ear of the lizard

This page was authored by Leem Jia Min, Cheryl