Singapore’s largest bird, which you probably mistook for an alligator… 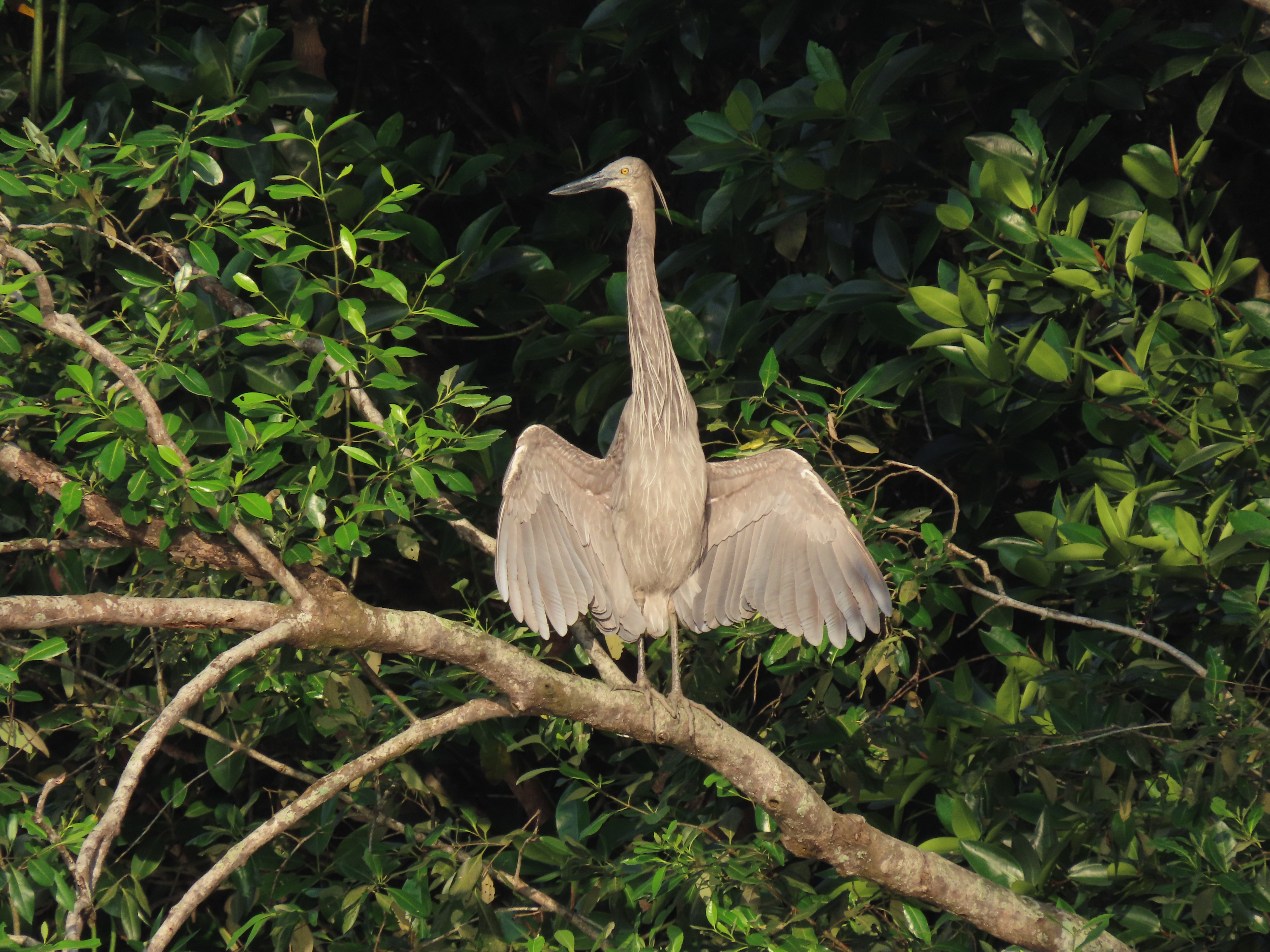 The Great-billed heron is Singapore’s largest bird. Standing at up to 1.15 metres tall, its height can almost reach the chest level of an average Singaporean. Its 1.9 metre wingspan is easily longer than most people. 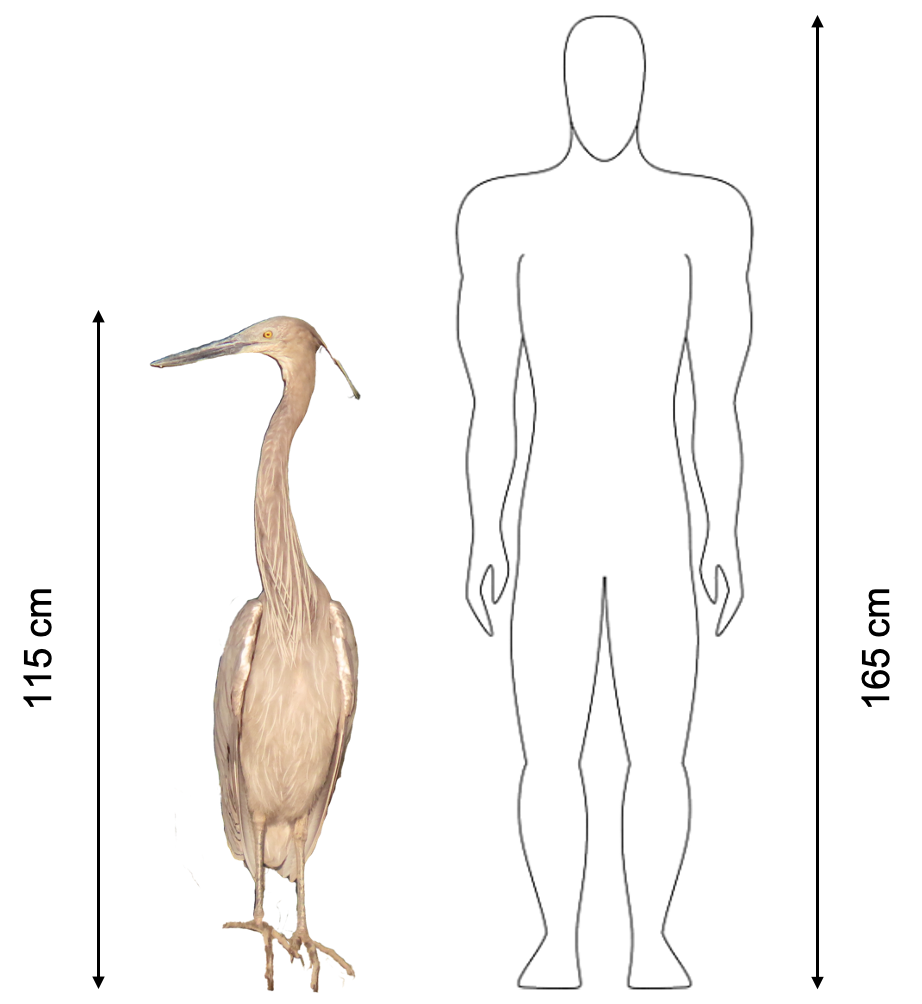 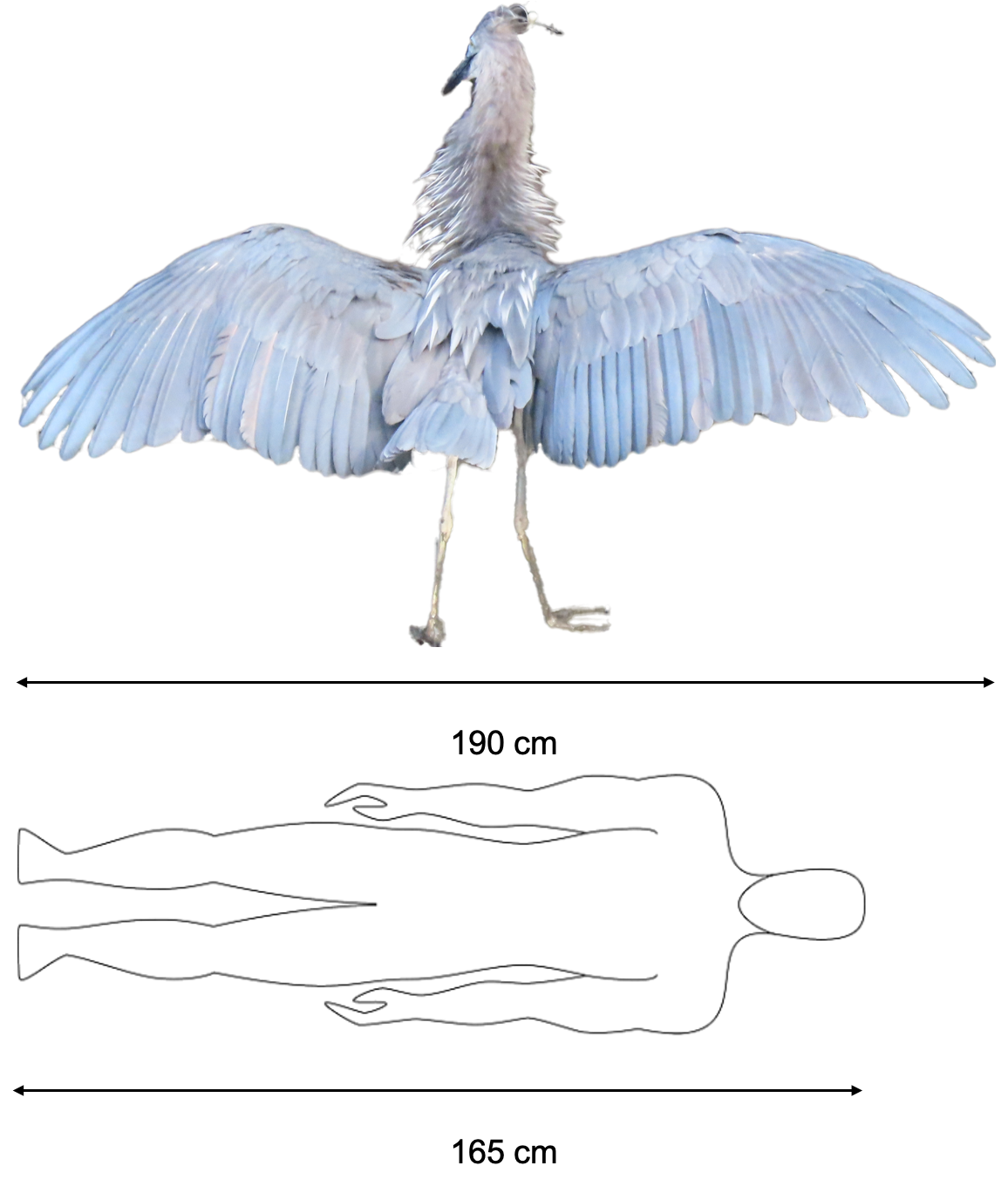 Its unique rumbling call that has led to its nickname “Alligator bird” [2]. Can you tell which of these two recordings are by an actual alligator?

Here is the answer:

It is a common local resident; and is a frequent attention-grabber at local mangroves like Sungei Buloh Wetland Reserve. It can also be found across a vast area of Southeast Asia and Northern Australia. For how common and prominent it is, available literature and data on this bird is surprisingly sparse.  Its current conservation status of Least Concern has led to neglect of this species in research and literature, despite it facing the threat of rapid population decline with habitat destruction. This can be a serious hindrance to potential conservation efforts.

The great-billed heron is never seen too far from the sea, gravitating to transition zones between water bodies and terrestrial environments comprising tall trees (usually monsoon forests). They have been found mostly at mangroves, coastal areas, mudflats, estuaries, beaches or coral lagoons. Great-billed herons have also been observed to gravitate to rivers, often following them upstream to occupy creeks or downstream at oxbow lakes. [8]

This tendency may be attributed to their need to hunt for aquatic prey, while still requiring basking spots in tall trees for when tide increases. [15] 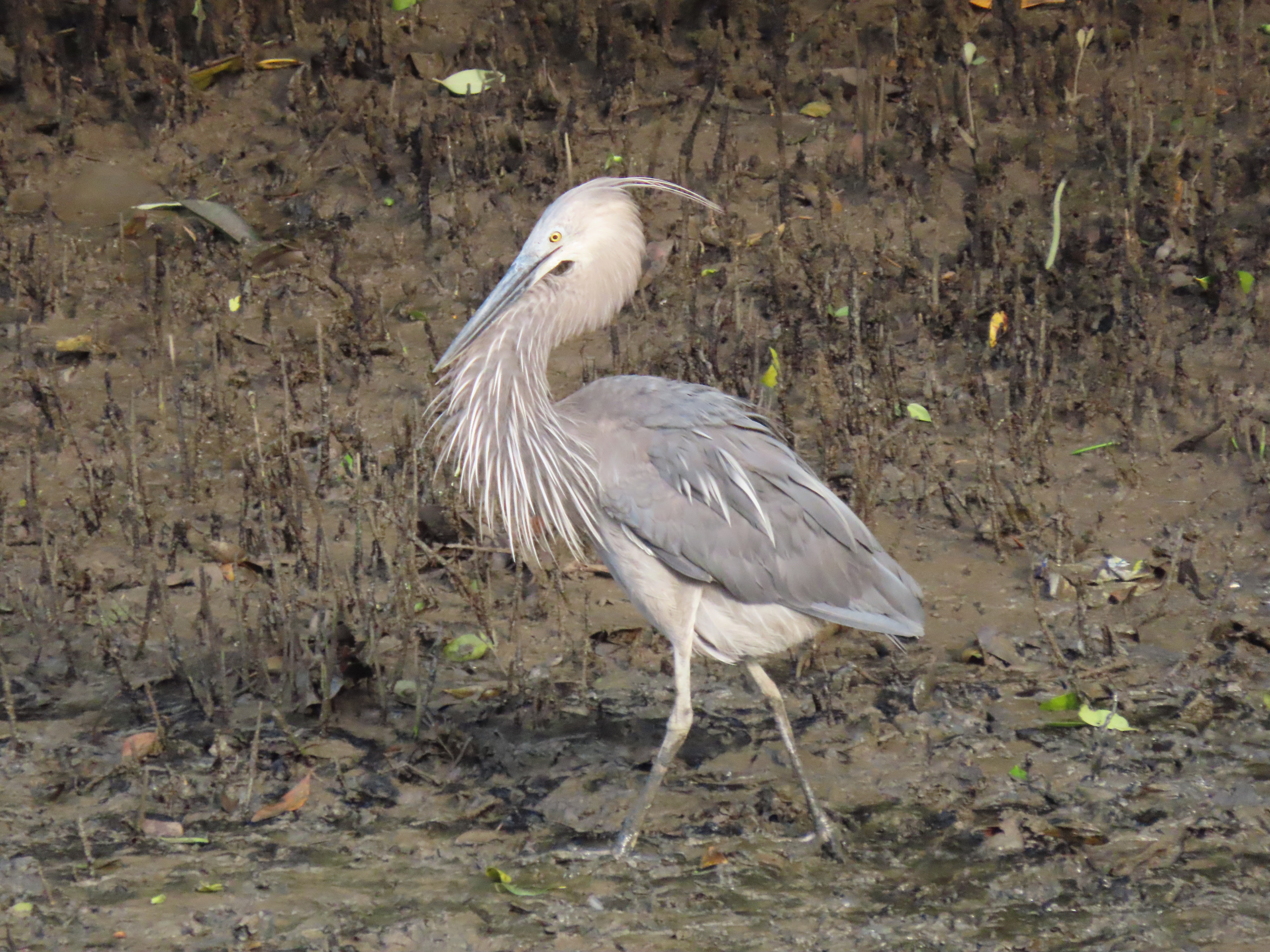 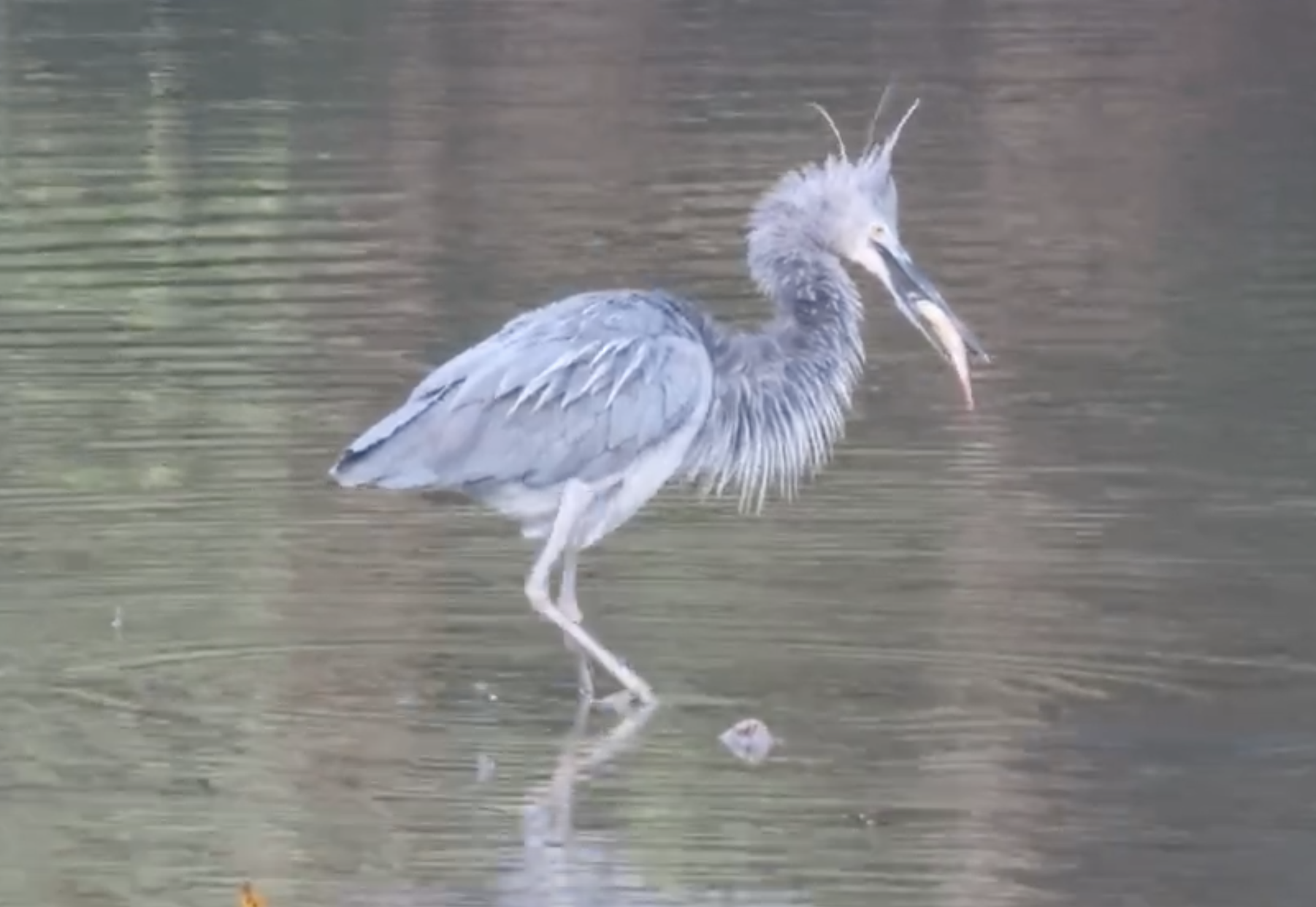 All three images by Clara Jesse Lau at SBNR Platform 2 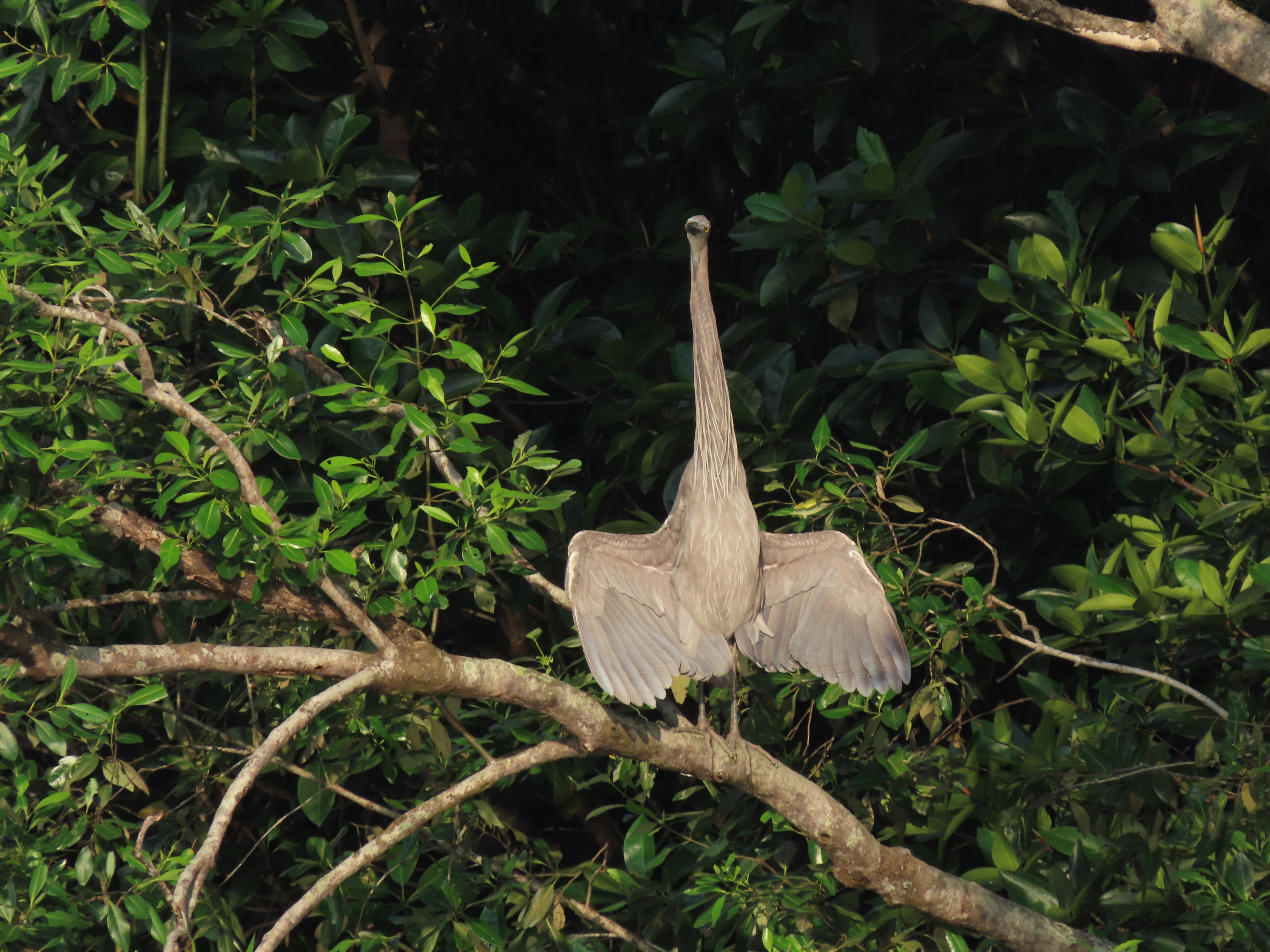 In mainland Singapore, great-billed herons are frequently spotted at the mangrove areas of Sungei Buloh Nature Reserve (Platform 2), and Western Catchment Area. They also occur in coastal and mangrove areas of Pulau Tekong, as well as in the southern islands, centred around Pulau Hantu, Semakau, Salu and Sudong. It occasionally visits the south coast of Singapore, such as Sungei Pandan and Tuas. [1] Great-billed herons have also been sighted at Pulau Ubin.

The most frequently successful sighting spot is Sungei Buloh Nature Reserve (Platform 2), at tide levels below 1.2 metres in the morning at around 0700 - 0800. More information of community sightings can be found on iNaturalist. Interested birders can explore the Heron Watch initiative by NParks which occurs annually between July and August.

Below are the local ranges highlighted in yellow, and verified sightings in red checkpoints. 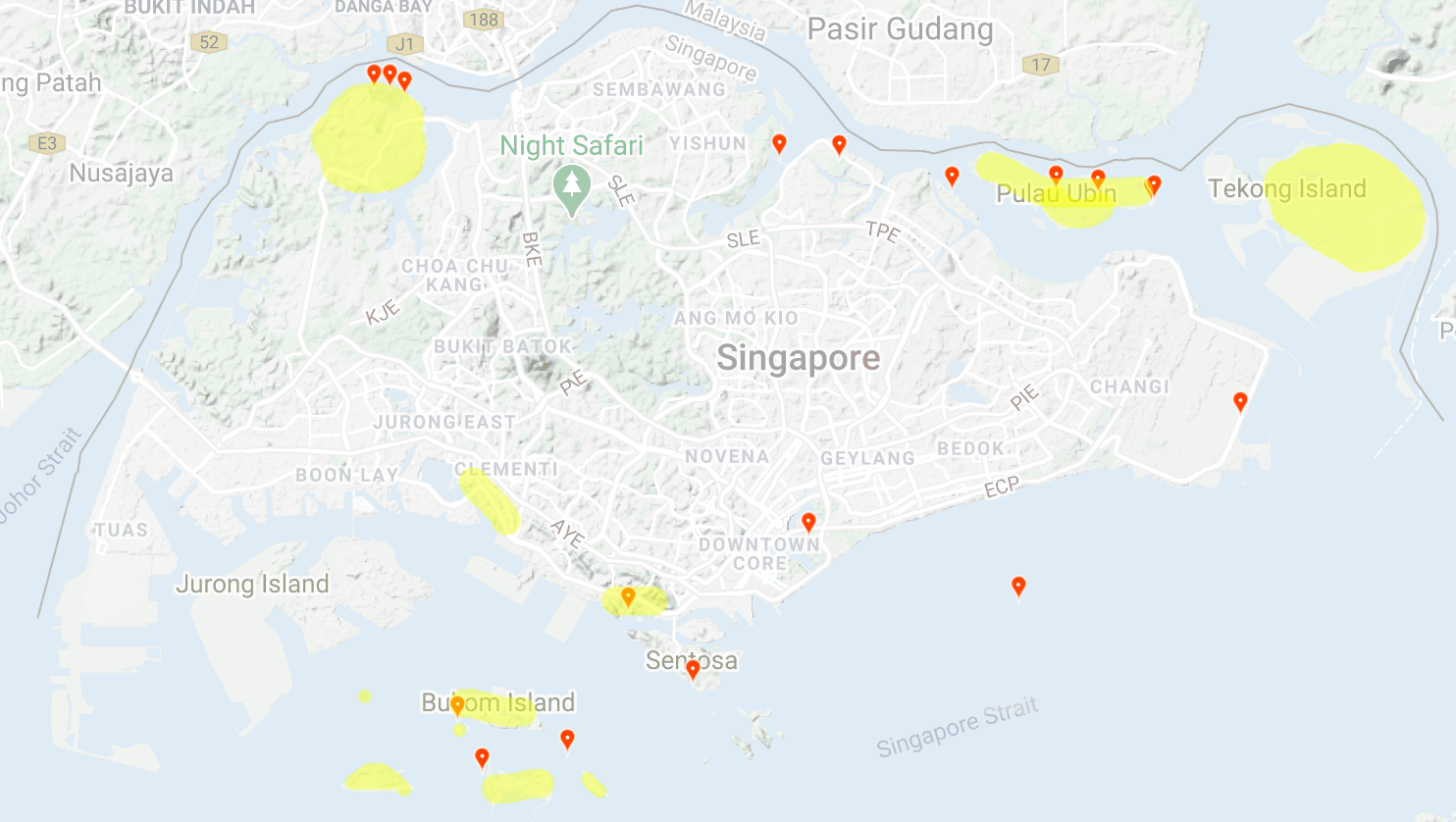 While its latin name suggests its presence in Sumatra, the great-billed heron is distributed across a vast area spanning Sundaland, Papua New Guinea and Northern Australia. Highlighted below are regions with historical records of the great-billed heron. Some records may be obsolete as no large-scale census has been done on this species over the last few decades. [8] 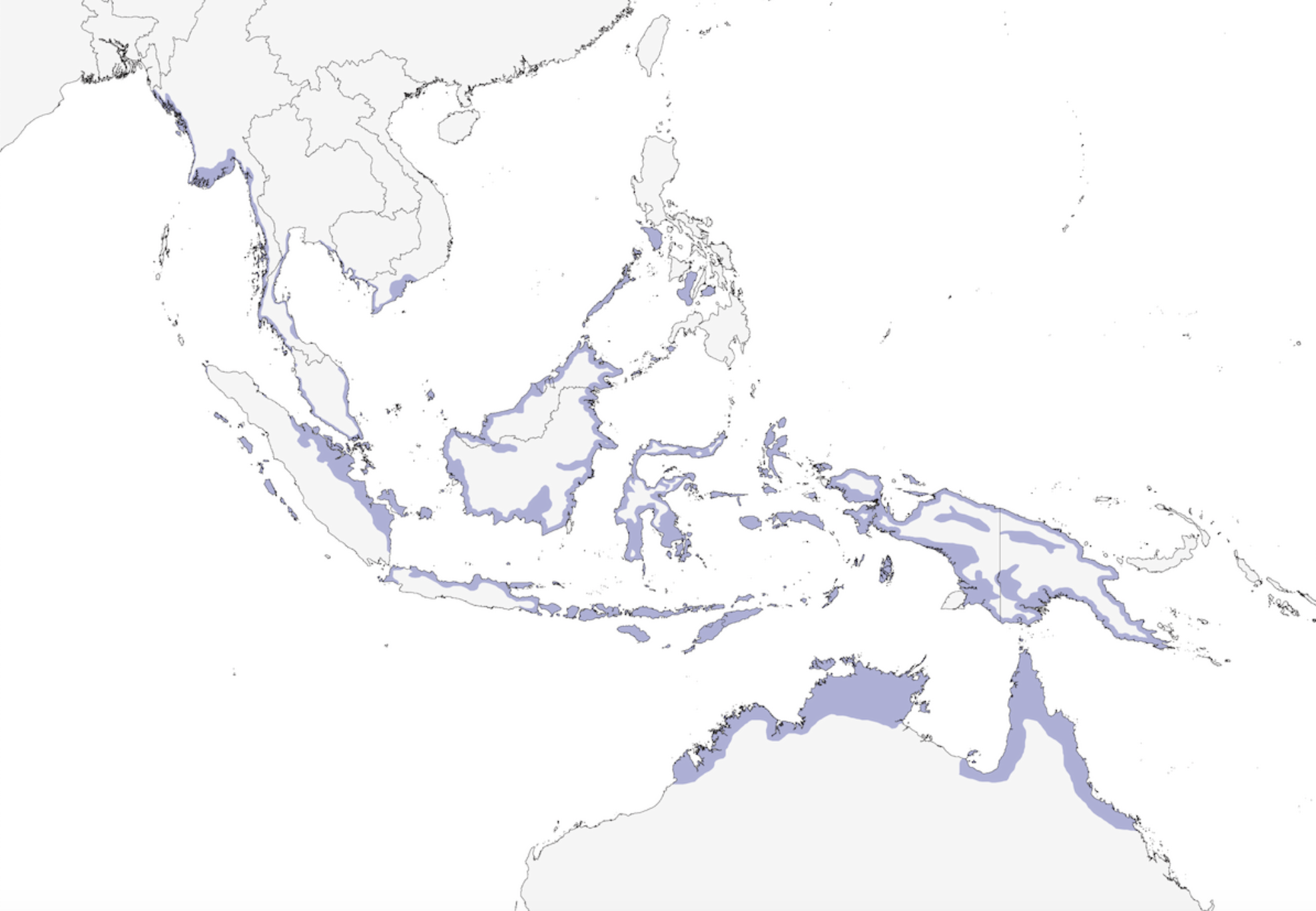 Distribution of Ardea sumatrana (Image adapted from Birds of the World: Great-billed Heron)

Great-billed herons range between 100-115cm in height, 1300-2600g in mass, with a wingspan of 190cm. It has a brownish-grey crown and silver-grey plumage. The upper throat is pale grey, lower throat brown-grey with pale underparts, and silver nape plumes. The head, back and neck are a pale brown-grey. The wings are a darker-brown grey that is slightly paler on the underside. The upper bill is black and greyish-yellow to greenish below. Their legs range from dusky grey to olive grey. Irides can be from yellow to silver-brown, and lores (the space between eyes and bill) can vary within shades of yellow and green. [1,8] 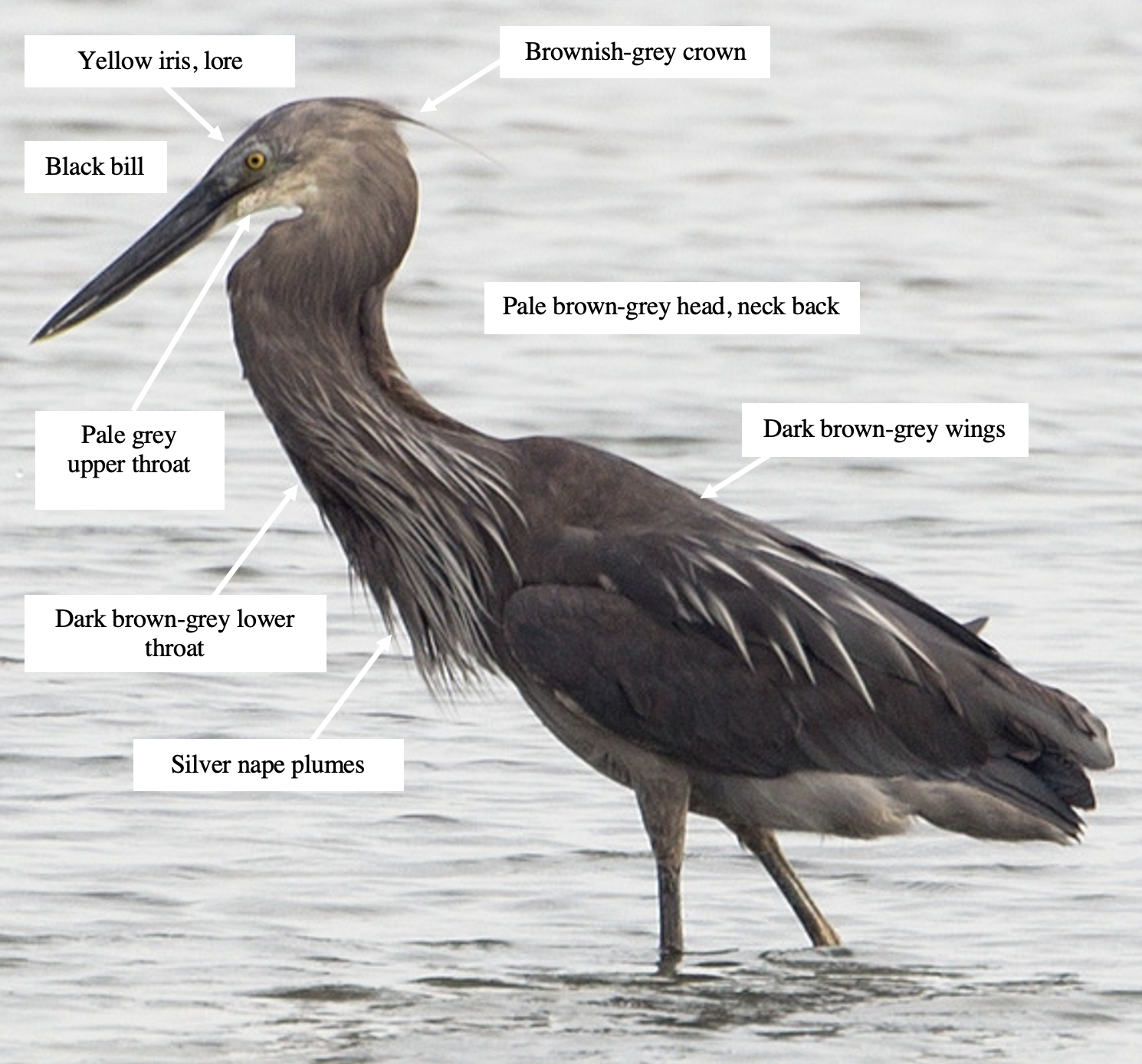 The color of some parts changes visibly during the breeding season: Throat and breast turn white, brown areas of the neck and back fade into a pale grey, and the bill develops a yellow-green tip and base. Lores also can be blue-grey during breeding season. [8] 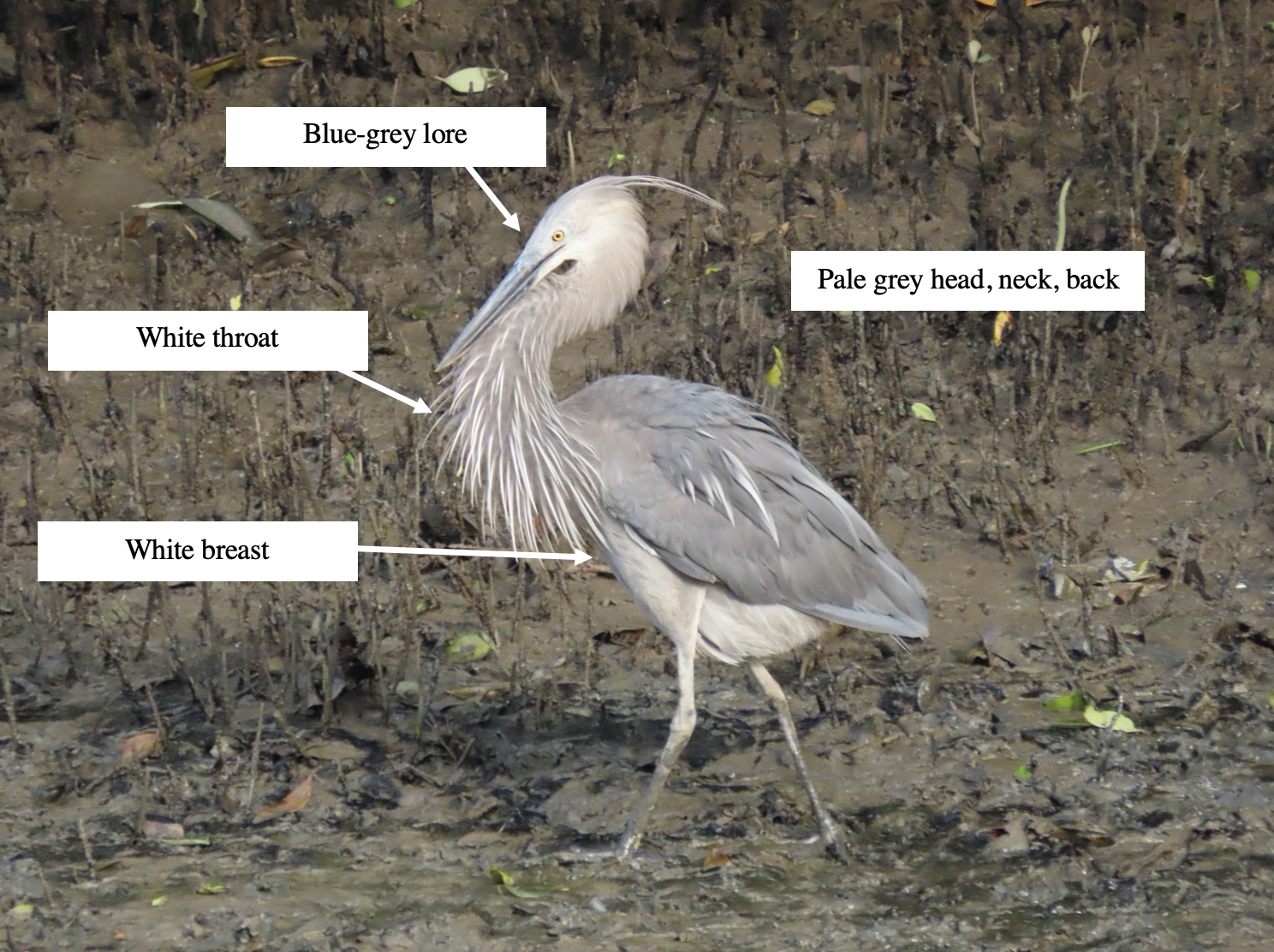 The immature bird is more rufous and has overall paler plumage than the adult. There are heavier white streaks on its neck and underparts, and a sandy-buff shade over back and underparts. The juvenile also lacks a crest, nape plumes and has a brown bill and legs. [8] 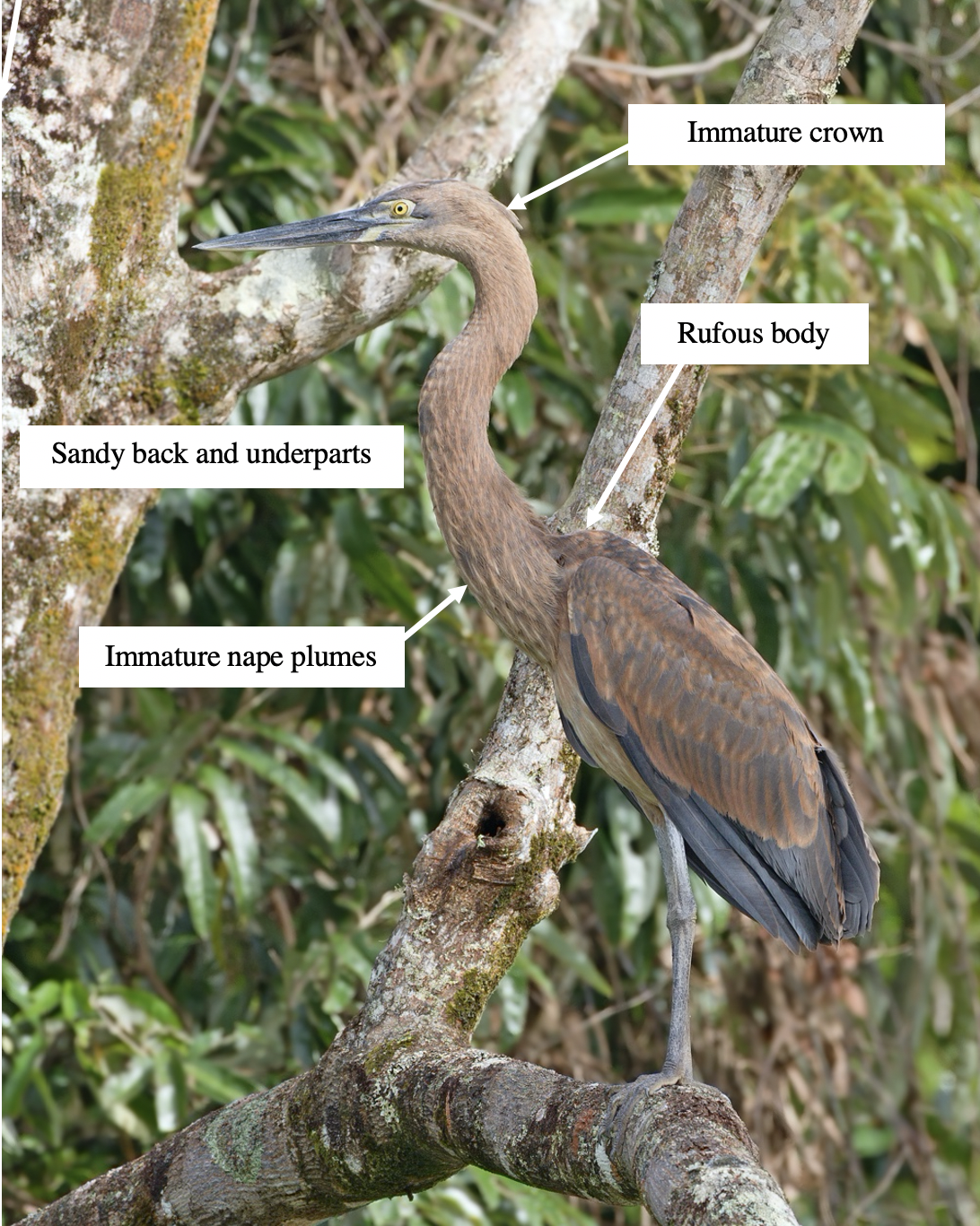 Distinguishing from other local herons

Besides its size, there are key features that distinguish the great-billed heron from other large herons in Singapore. [9,10]

Great-billed herons are observed to wade in water and thrust their huge bill forward to catch, or sometimes spear, large prey. Their diet comprises mainly fish, including mudskippers; and crustaceans [8].

The great-billed heron tends to be territorial and feeds solitarily. Groups or pairs of herons feeding together are rarely seen. [8] To enforce territory, great-billed herons use a forward display to ward off nearby herons.  The forward display involves the raising of body and crest feathers, and shooting its head forward while snapping its bill. The display may also be accompanied by outstretched wings, to appear larger to an enemy. Below is an example where two males display in territorial defence.

This is similar to other herons in the Ardeidae (Heron) family.

The heron may sometimes be targeted by other birds for the prey it has hunted. It will show the same forward display in defence. An example is shown in the following video where a great-billed heron is attacked by a White-bellied sea eagle. [7]

Foraging occurs mainly during low-tide, venturing out to water up to around 30cm deep. Hunting is done by standing still and quiet or slowly striding in shallow waters. [9] They retreat to trees when the tide rises. During non-breeding seasons, Great-billed herons are crepuscular and are mainly active during twilight.

In Singapore, the Great-billed heron breeding season mainly coincides with the break between the Northeast and Southwest monsoons, which spans between May to June. This similar breeding month range is observed at North Australia. However, herons in some other areas breed slightly later; occurring between September to January at East Australia, August in West Java, November in Simeulue. The strategy to breed during dryer seasons may be to avoid the possibility of nest flooding. [8]

Nests are usually built with coarse dry sticks about 20-30m from water concealed by fairly dense mangroves. The nests would usually be constructed over horizontal limbs suspended above the mud. Nest size can vary at around 1.2m wide, and 50cm deep. Great-billed herons are known to reuse available nests for several generations. [16]

Great-billed heron clutch size is often 2 eggs, which are in a pale-green blue, and range between 6-7cm long and 4-5cm wide. Parental effort of incubating and tending to chicks is shared between both male and female. Chicks first have pale grey down before fully feathering at 63 days, and usually only one of the two survive to fledge. [8,16]

Unlike some other birds, courtship displays in the Great-billed heron are not confined to the male; instead it is a responsive process involving both sexes. A courtship display would involve one heron adopting a stretch display, where its neck and head are outstretched, and the other heron with a fluffed neck, where its head is lowered, neck arched, and throat swollen to puff its feathers. Bill dueling is also a frequent courtship display element where the two birds would cross or grasp bills. Bill dueling has been observed across the Ardeidae family (Herons) as a pair-forming and bond-strengthening display.[7,8] The male and female call repeatedly in response to each other following the bill dueling.

The great-billed heron has a deep, resonant call that resembles the low rumble of an alligator.[5] The call lasts for several seconds and is repeated three to four times with intervals of a few seconds. During the call, the heron tilts its head upward with a fluffed neck. [7] These calls are usually interpreted as territorial warnings to nearby herons. It has also been heard at night when the heron is disturbed or defending their nest.

Their vocalization can vary to a louder, guttural boom. Such booms are observed when the heron is being directly attacked by another animal. A similar boom is heard when the heron thrusts its head forward to pick up a crustacean. This functionality of such a vocalization while stalking is still unexplored. [8]

Below is a recorded call followed by the above described boom.

The great-billed heron is not globally threatened and remains listed as least concern on the IUCN Red List, due to its vast distribution. However, population densities are low and recorded sightings are obsolete as the species may have been extirpated from destroyed habitats. Reports and information on the species at several regions are scarce and sometimes contradictory. The main protected areas for the great-billed heron are national parks in Borneo. [8,13] The great-billed heron is locally endangered in Singapore, and is confined to the country’s last remaining mangrove habitat patches in Sungei Buloh and the southern islands, of which only Sungei Buloh Wetland Reserve is protected.

Great-billed herons are important indicators of intertidal coral reef health. As Singapore's largest bird, it can easily function as a flagship species in the protection of mangrove habitats in Singapore, which are rapidly declining. [3]

The origin of the common name Great-billed heron is not well-documented, but is speculated to simply refer to the bird’s distinctly large, long and sharp bill, which it uses to hunt and spear large fish [19]. The latin species name Ardea sumatrana translates directly to “Sumatran Heron”. This is in reference to its prominent distribution across Sumatra. Prior to the acceptance of sumatrana as its species name, the bird was also named Ardea typhon by C.J Temminck, whereby typhon refers to the mythical Greek giant Typhoeus. [6] Typhoeus terrified the gods before meeting his end where Zeus crushed him under Mount Etna. This name was likely used in reference to the large size of the great-billed heron.

The Ardea genus was first described by Carl Linneaus in the 1758 edition of Systema Naturae. The description translates to "sharp bill, long".

The holotype for Ardea sumatrana is a female adult from Indonesia, and is currently stored at the National Museum of Natural History, Leiden [2]. This specimen was actually collected and described by C.J Temminck in 1829 as Ardea typhon Temminck 1829. The locality is labelled as "Edges of Gambia" but is indicated to be wrong, and is now established to be from Indonesia. It is described to have yellow eyes and a grey body. 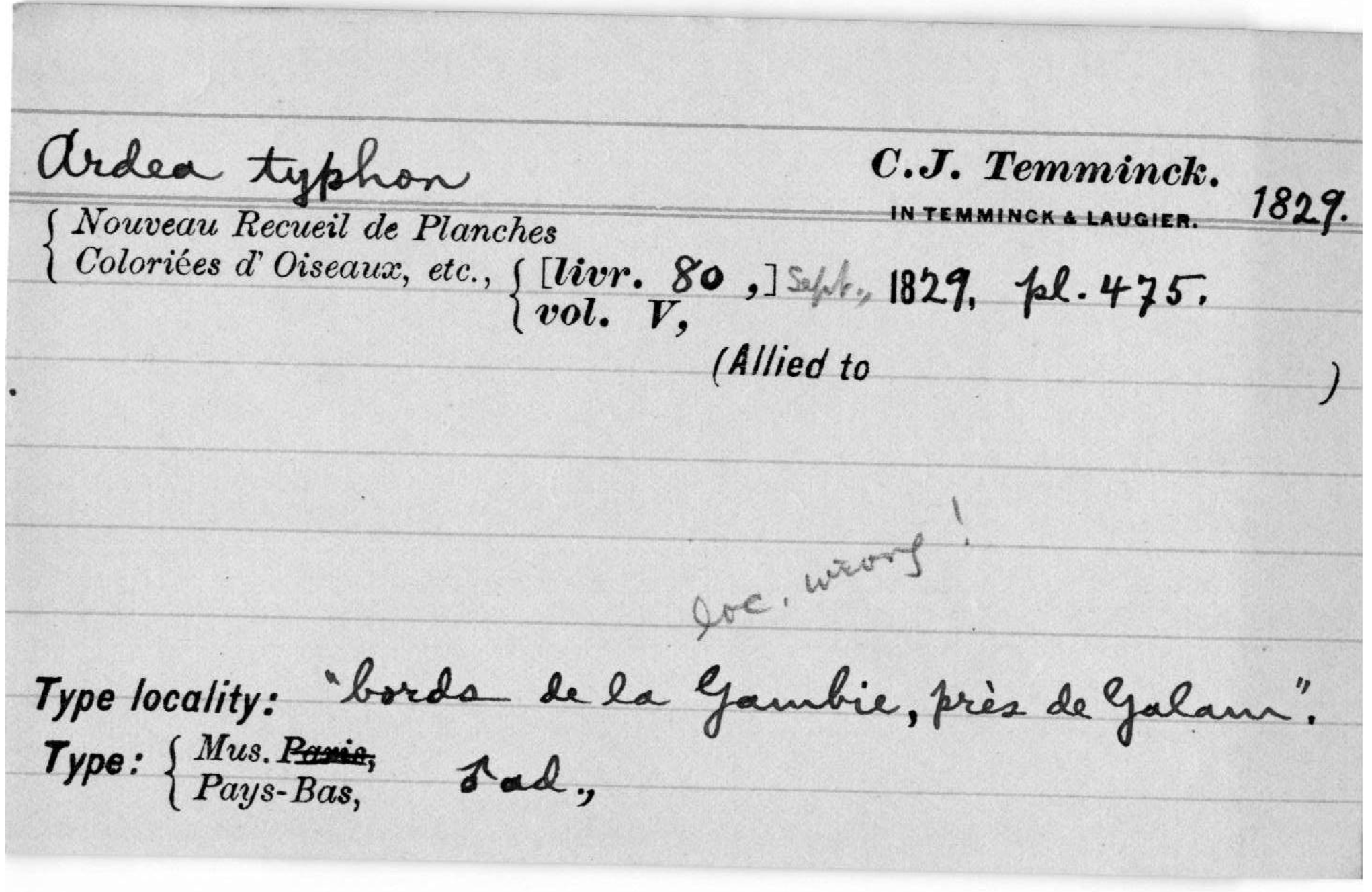 It is unclear when the name was changed to Ardea sumatrana Raffles 1822. However, it is understood that some species "described" by Sir Stamford Raffles may have been attributional to his under-documented naturalist work. [8, 12]

Prior to improved DNA analyses methods in the 1970s, the Ardeidae family was previously erroneously grouped under the order Ciconiiformes, which was treated as a “wastebasket” taxon for tall and long-necked wading birds. [8] Ciconiiformes were an assemblage of all early advanced land and sea birds for which their research technique delivered insufficient phylogenetic resolution. In 2008, Ardeidae was regrouped under Pelicaniformes after DNA sequence analysis studies showed them to be more closely related. [4]

Ardea sumatrana surprisingly does not have numerous subspecies unlike most other birds. This is likely due to a lack of literature and genetic databanks for this species. While Ardea sumatrana is still largely regarded as monotypic, there are reports on the existence of a subspecies Ardea sumatrana mathewsae distributed along North Australia. This group is reported to be browner, with a shorter bill and tarsi. The validity of this categorization is still dubious and under-represented in literature. [8] However, a holotype for mathewsae exists in the American Museum of Natural History, described to have longer bills and tibia-tarsi than sumatrana from Borneo. [2]

The closest relative of Ardea sumatrana is the critically endangered Ardea insignis, or White-bellied heron. These two taxa are allopatric. The name Ardea insignis was only used after 1963, and literature records of this heron appear as Ardea imperialis prior to this. [8, 11]