Etymology
The species epithet refers to the rudimentary claws of the species.

Two otter species occur in Singapore. They include the larger and more common smooth-coated otter Lutrogale perspicillata and this species which is cat-sized when fully grown. Below are several diagnostic features that set them apart from other Asian species.

The small-clawed otter is the smallest species of otter with a body length of about 0.9m, which is only slightly more than half the size of a smooth-coated otter. Although there can be overlaps in size with the cubs of larger species of otters, a family group which consists entirely of small-sized otters is a telling sign that it is of this species.

Another diagnostic feature is their paws. As its common name suggests, the small-clawed otter has incompletely webbed feet which bear reduced claws that do not extend beyond the toes unlike the other Asian species. 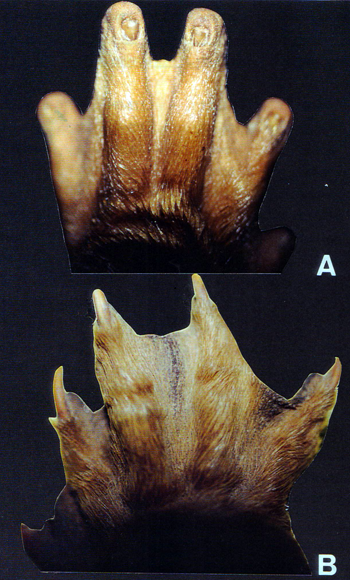 Forepaw of A: Small-clawed otter; B: Smooth-coated otter (ZRC Specimen: from Sivasothi,19951 )

Their rhinaria is usually bare with a flat dorsal margin and anterior surface protruded forward, distinctly different from the other Asian species. 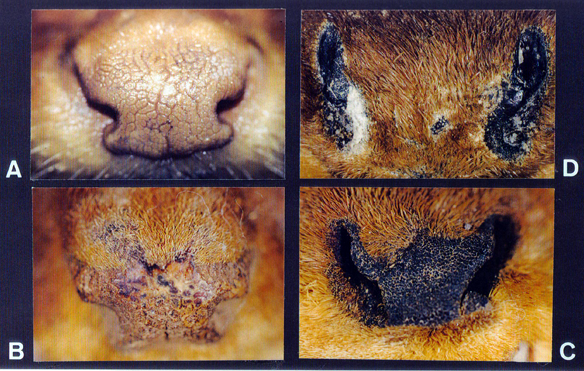 Feeding habits
Consists mostly of crabs and molluscs, followed by significant proportions of amphibians and fish 8 9  10  11 .
Their dextrous and very sensitive hand-like front paws are used to feel for prey under boulders and logs, crevices, debris and vegetation both underwater and on the banks where their mostly invertebrate prey are hiding 12  13  14 . The dexterity of their paws can be appreciated in captivity, where juggling stones is common (see video).

Based on captive studies, small-clawed otters reach sexual maturity at 2 years. Breeding is not seasonal but based on an oestral cycle of 24-30 days, with a 3 day oestrus. Mating usually takes place in water. At the end of a 60-64 day gestation period, up to 6 pups are born.
This species form monogamous pairs and mate for life, with the female being dominant. Only the alpha pair of a group (the original parents) will breed.

Social organization
A gregarious species, they are often seen in groups that range from 2 individuals up to 15 12 17 18  which communicate through spraint (otter faeces) and over 12 separate vocalizations 19


More on the species biology here.

The small-clawed otter has a large distribution range, extending from India in South Asia east ward through entire Southeast Asia up to Palawan (Philippines), Taiwan and southern China in the north. In recent years, it has established itself in England after escaping from captivity 21 22 . 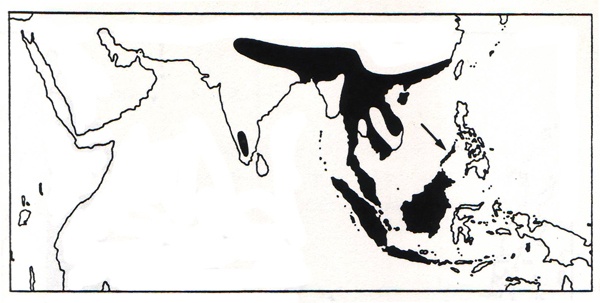 Distribution of the small-clawed otter (From Sivasothi, 1995)

Listed as 'Vulnerable' by IUCN and under Appendix II of CITES, the biggest threat to small-clawed otter populations is habitat destruction. Around Asia, wetland habitats are being reclaimed, dammed and converted to aquaculture among other things. The quality of existing habitats are reduced when waterways are canalized or dammed as bankside vegetation is reduced and high concrete walls are constructed, making it highly unfavourable for otter landings. Reduction of prey biomass and heavy metal contamination also contribute to the decline of otter populations.

Although protected by CITES, the small-clawed otter still faces the threat of being hunted for their pelt, killed as a pest and illegally traded in Indonesia where wildlife law enforcement is lacking.


Otters are fully protected under Singapore law2 . However they are still at risk amid ongoing development. Reclamation work, damming and canalization of rivers, conversion of wetland habitats to urban areas, pollution and high coastal activity continue to threaten otter survival.

Two species of otters, the small-clawed otter and smooth-coated otter Lutrogale perspicillatahave been recorded in Singapore. Old records suggest that this was a common and abundant species in Singapore prior to the 1950s. However, from Harrison's (1966)22  time, they appeared to be visitors rather than residents. In 1989, there was possibly a resident population in Pulau Tekong Besar (an island northeast of mainland).

From Sivasothi, 199423
Based on several sightings between 1994 and 1995, it was concluded that a family group of at least one adult and four cubs was resident in Pulau Tekong Besar - the first recent records of resident small-clawed otters in Singapore.

From Vertebrate Study Group of the Nature Society (Singapore) and Raffles Museum of Biodiversity records,
Recent records (post-1998) of small-clawed otters are far and few between. The records were mostly between 2004 to 2006 and concentrated to the northeastern islands of Singapore (Pulau Tekong and Pulau Ubin).

Being such a well-known species, it is surprising to find out that their taxonomy has always been problematical.

Taxonomic problems mainly concern its generic status. According to Harris 4 the species was first described as Lutra cinerea by Illiger (1815). Subsequently, it was considered Amblonyx Rafinesque, 1832, a subgenus of Aonyx Lesson, 1827, followed by many mammal listings; though some use Amblonyx as a full genus. This classification was based on the assumption that rudimentary-clawed otters were closer related compared to the clawed ones. When Van Zyll de Jong24  subjected quantitative and qualitative characters of extant species of otters to morphometric and cladistic analyses respectively, the results indicated that Amblonyx and Aonyx are divergent taxa.

During the rest of the 19th century, the species was renamed frequently, becoming amongst other things: Lutra leptonyx Horsfield, 1824; Thomas, 1889, Aonyx leptonyx Cantor, 1846, Aonyx horsfieldii Gray, 1837, Lutra barang Blyth, 1863, Micraonyx cinerea J. A. Allen, 1922; G. M. Allen, 1938. The specific epithet assignment of cinerea or cinereus was also a point of contention, where supporters of the latter argued that it should be accordance with the gender of the genus24 .

A recent publication based on molecular taxonomy made it clear that this was the latest Asian otter species to arise and that surprisingly, was more closely related to the smooth-coated otter Lutrogale perspicillata rather than the African clawless otter Aonyx capensis.

The holotype and original description for any species is always crucial for its documentation. It is especially so for the case of Aonyx cinerea, which was initially known under many names until the realization that they all referred to the same species. The holotype for this species was designated long after the original descriptor, Illiger, 1815.

The holotype is located in the Rijksmuseum van Natuurlijke Historie (National Museum of Natural History) in Leiden, The Netherlands under the epithet “Amblonyx cinerea wurmbi Sody, 1933”.

Links to other types of species pages

This page was authored by Meryl Theng
Last curated on 2011