Similar to adult, but the casque is reduced to a raised knife-edge on the bill, which is pale yellowish-green, with no black markings.

Colour: Basically a black-and-white bird: mostly black with a white belly and thighs, and white accents around the eye, on the wing tips and tail.Trademark: Large, long bill. Adults have a casque (a knob on top of the bill) which is yellow-white. The male has a larger casque with few black marks, while the female has a smaller casque with more black marks.Size: This species is the smallest among Asian hornbills, with males measuring from tip of bill to tip of tail 55-60cm and females being slightly smaller. The wing length ranges from 23-36cm, the bill up to 19cm in males and up to 16cm in females.

There are currently five recognised species under the genus Anthracoceros.
A. albirostris was long considered to be conspecific with A. coronatus and the two species have been confused several times since their first discovery in the 1800s, leading to synonymy of common and scientific names. A. albirostris is smaller than A. coronatus, has less black on casque and pale blue (instead of pink-tinged) throat skin.

The Oriental pied hornbills are omnivorous. Food is usually brought by the male and consist of fruits, insects like beetles and crickets, spiders, lizards and even newly hatched bird chicks (Banwell & Lim, 2009)1 . These are generally what hornbills eat, as well as what they feed their chicks (Collar, 2001)2 . By volume, fruits predominated, with figs from the bodhi tree (Ficus religiosa) constituting a significant quantity (Banwell & Lim, 2009)1 .

Mating begins with courtship feeding, as the male offers the female a fruit or an animal prey. Courtship may also include interlocking of bills. The male will then entice the female to enter an appropriate cavity in an old tree with food. If successful, they will proceed to seal off the entrance with a plaster of mud and fibres. This is done by the male gathering and delivering earth to the female, which seals herself inside the cavity. A narrow slit is left open so that he can feed her and the chicks. This remarkable behaviour is believed to deter large predators. After a period of about 3 months when the chicks are about to fledge, the female will break open the seal and emerge.
Breeding season: During the dry season, from February to May (Poonswad et al., 1987)3 . On average, the number of nestlings that fledge per season is low, with only 1.5 chicks per pair of Oriental pied hornbills (Poonswad et al., 1999)4 .

Forest edges and open moist deciduous and evergreen forests, from foothills up to 670m.

The bill is not as heavy as it seems. It is not made of solid bone, but of a honeycombed tissue. Even the casque is hollow and composed of the same keratin which lines the entire bill.


#2 The Oriental pied hornbills can breed in urban habitats!

While hornbills are mostly forest birds, the Oriental pied hornbill is an exception (Poonswad, 1995)5 . As long as there is sufficient food and large mature trees for nesting, it is able to survive around human habitation (Chong, 1998)6 . From current observations, it would appear that a noisy, busy urban environment poses no barrier to the selection of a nesting site and to successful breeding. Far more problematic for the hornbills would be the availability of a suitable and large enough tree cavity in which to nest.

While the female Oriental pied hornbill is sealed inside the tree cavity, she does not soil the nest but turn around, push her rump to the cavity entrance and defecate forcefully into the air! It is believed that she also clears the droppings of her chicks on a frequent but irregular basis (Banwell & Lim, 2009)1 . When the chicks are grown up, they defecate frequently out of the nest just like their mother did. Whether this is a natural instinct or learned from watching the mother, it is impossible to say.

In Singapore, A. albirostris is mainly distributed in Changi, Pulau Ubin and St John's Island. It has also been introduced into Singapore Botanic Gardens and Sungei Buloh Wetland Reserve.

I. ROLE IN THE ENVIRONMENT

As hornbills swallow fruits with large seeds, the latter are regurgitated up to an hour later. With small seeds, these may be passed out with the faeces. As such, they are important seed dispersers, especially for seeds that are too big for smaller birds to eat, and play an important role in the health of the forest.

II. ECOLOGICAL FACTORS THAT AFFECT THE SUCCESS OR FAILURE OF REPRODUCTION

The survival of the Oriental pied hornbills is closely associated with the quality of their environment. Deforestation in the region and overall human pressure on the environment has posed real threat to the local survival of the species. It was recently noted that this species has been almost completely extirpated from southern China. In the Thai-Malay Peninsula, the species may be threatened by off-take for the trade in fledglings and outright forest clearance. There is some evidence that the species has traditionally been captured for the local pet trade, as historically one to two were reportedly kept in every village in at least some areas of Myanmar. The casques of Oriental pied hornbills are common souvenirs in the markets of Thailand, Laos and Vietnam; however, the extent of this trade has not been measured.

The Internation Union for Conservation of Nature (IUCN)7 lists A. albirostris as a taxon of "Least Concern"due to its large distribution range and stable population trend.

THE ORIENTAL PIED HORNBILL IN SINGAPORE

Singapore had its own native Oriental pied hornbills in the 19th century (Gibson-Hill, 1949)10 until about the 1920s (Robinson, 1927)11 . Due to rapid development and large-scale deforestation, the species appeared to have gone extinct locally until the 1960s when it was irregularly sighted on Singapore island. These birds were thought to be escapees from the wild bird trade (Wang & Hails, 2007)12 . There were two subspecies believed to be breeding in Singapore, the northern pied hornbill (Anthracoceros albirostris albirostris) and southern pied hornbill (Anthracoceros albirostris convexus). In the early 1990s, a pair of hornbills belonging to the convexus subspecies was found to be breeding in the offshore island of Pulau Ubin, and it was speculated that they have flown from the nearby Johore state of Peninsular Malaysia (Lim, 1994; Wee & Subaraj, 2006; Wang & Hails, 2007)13 14 12 . 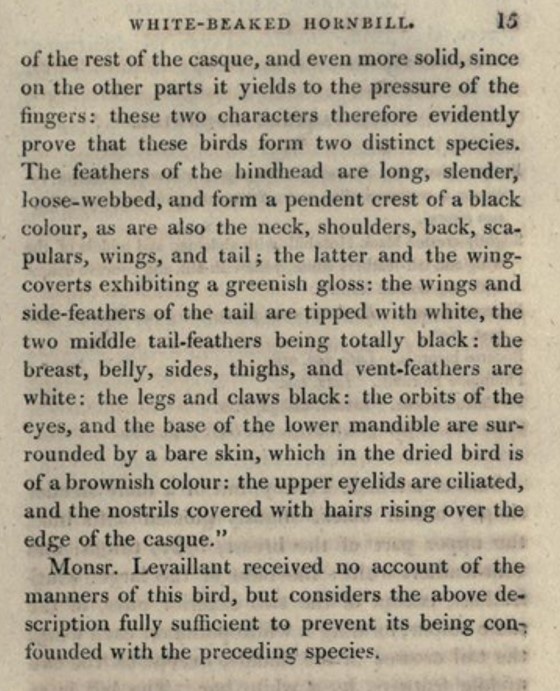 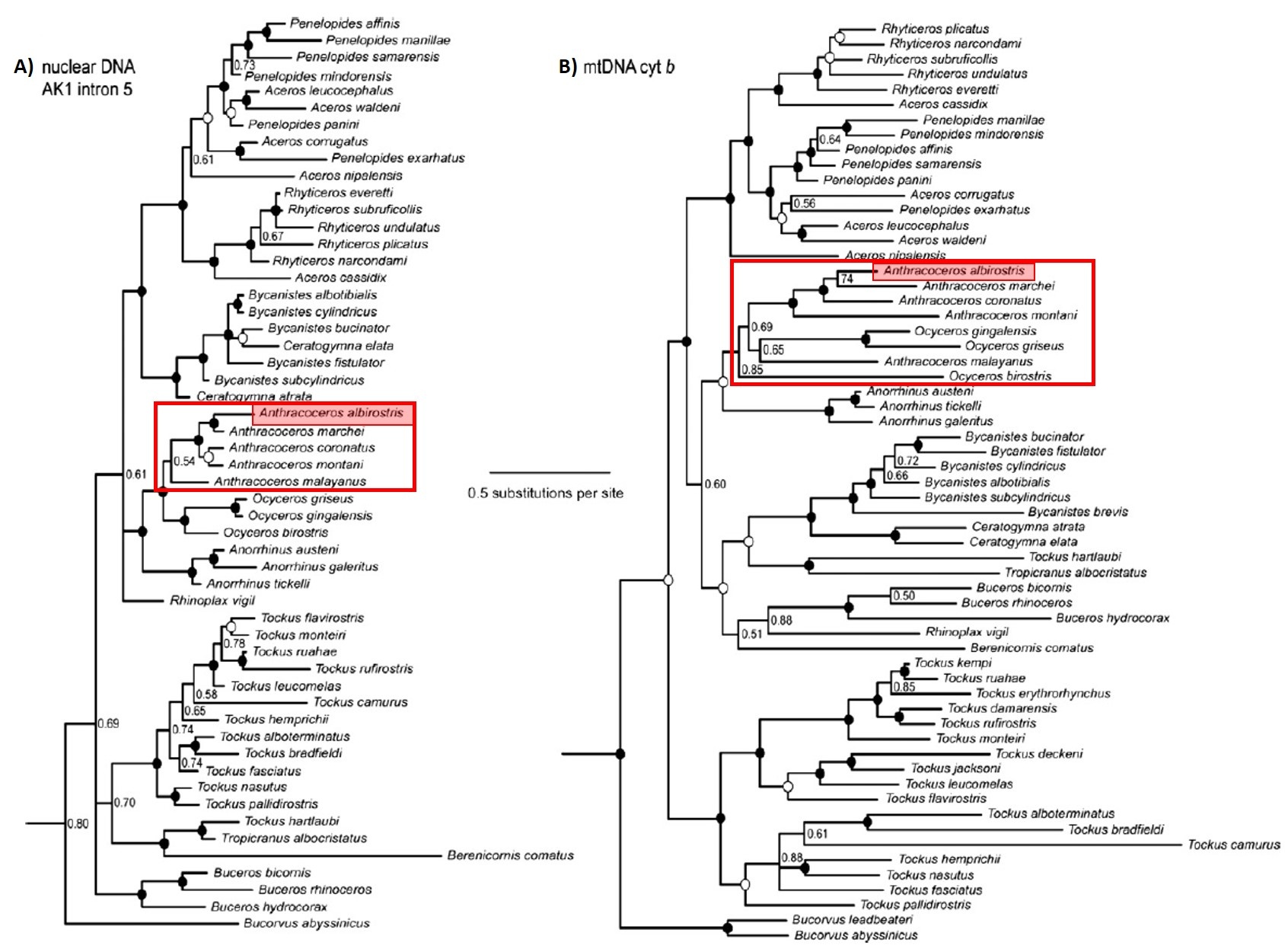 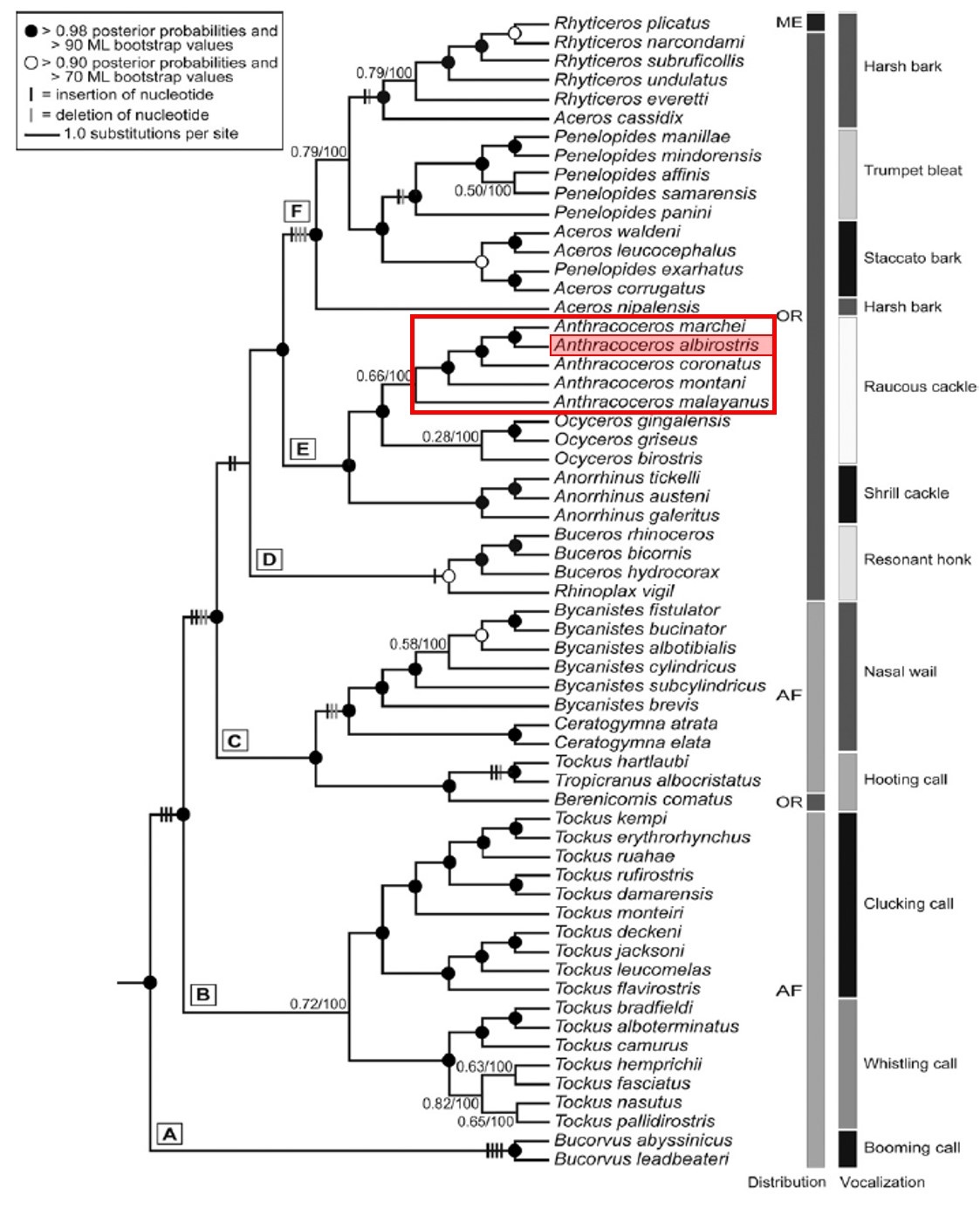 The nuclear tree suggests that Ocyceros and Anthracoceros are reciprocally monophyletic (boxed in red), whereas the mtDNA tree recovered polyphyly of both genera (boxed in red). Concatenated trees were similarly inconsistent, with the "best" tree recovering monophyly (boxed in red), while all other analyses of the combined dataset suggested polyphyly. Further sampling of loci is needed to resolve the phylogenetic relationships between Ocyceros and Anthracoceros (Gonzalez et al., 2013)17 .