This species, also known by other common names such as the Eurasian kingfisher or river kingfisher, is a common species of kingfisher which is widely distributed throughout parts of Europe and Southeast Asia1 . It is not as common in Singapore compared to more temperate regions in its range, such as England, and is one of the eight different recognized kingfisher species that can be found in Singapore. Notably, it is known to consist of up to seven subspecies and is widely recognizable due to its blue iridescent colouration on its wings. 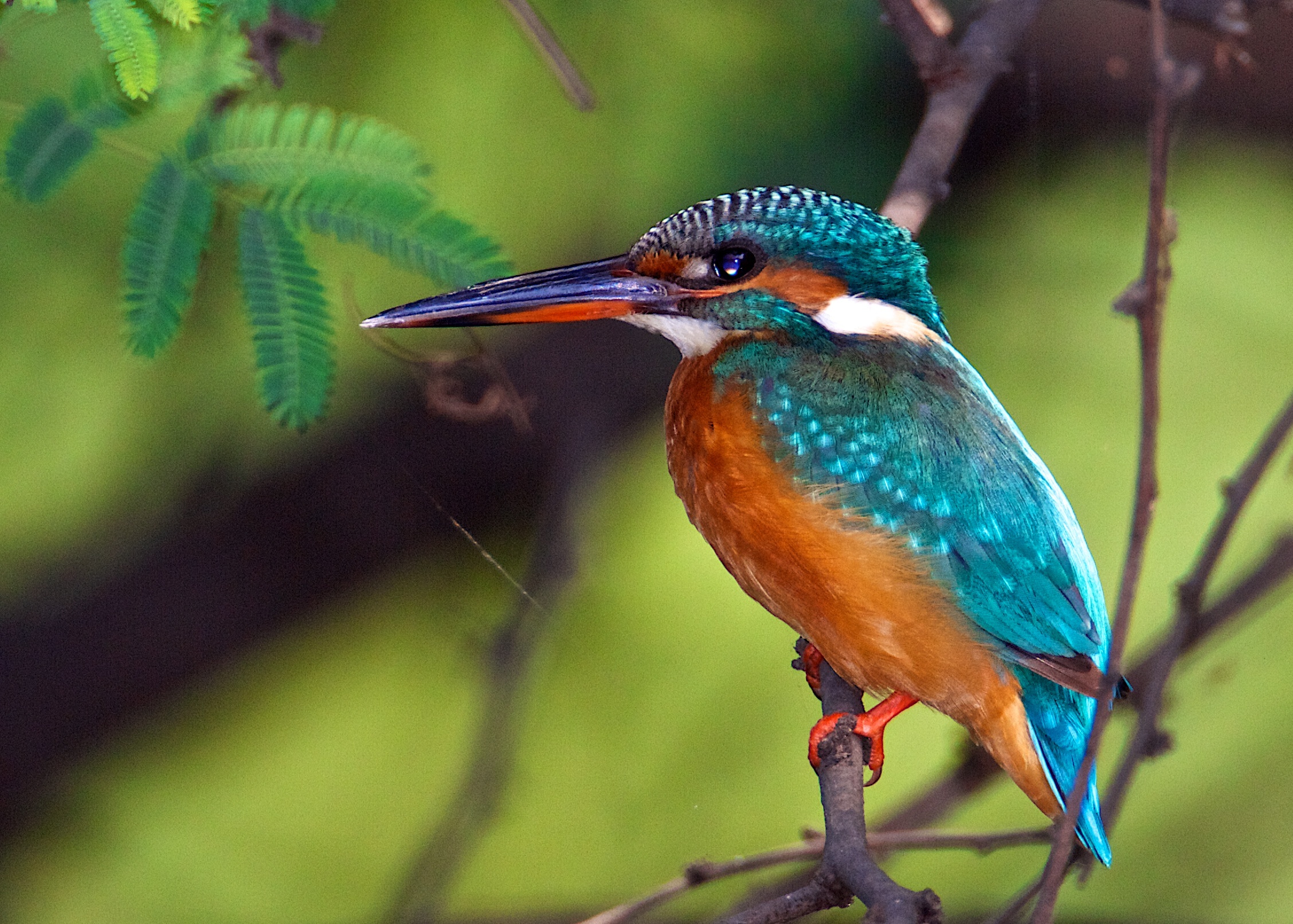 Figure 1: A common kingfisher perched on branch, photographed in Keoladeo National Park, Bharatpur, Rajasthan, India. Given the location where the photograph was taken, as well as its crown coloration, this bird most likely belongs to the Alcedo atthis taprobana subspecies which is a resident breeder in Southern India and Sri Lanka. Credit goes to Lee Hunter for the photo2 . Photo taken from the Internet Bird Collection website.

Variation Between the Subspecies

As mentioned previously there are seven subspecies of the common kingfisher that have described since the first description by Linnaeuas in 17583 4 . Detailed information on the variation between the different subspecies can be found below:

This subspecies is known to breed in areas of northwestern Africa, Southern Italy, eastward to the Kashmir region, and as far north as Siberia.During the winter months, it migrates to more southerly countries including Isreal, Sudan, Yemen, Oman and Pakistan. It has an overlapping range with the Alcedo atthis ispida due to its greener crown, paler underparts and larger size. This subspecies was described by Linnaeus in 1758. 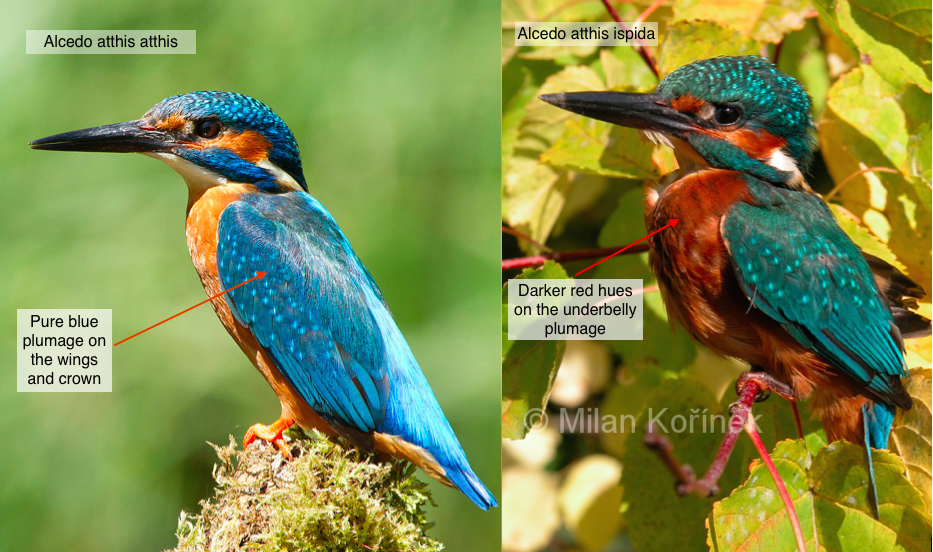 Figure 2: This figure illustrates the physical characteristics of the kingfisher subspecies which breed in Europe. The image was adapted from two images, one from Wikipedia Commons (left) and the other 5 from BioLib.cz ( credit to Milan Korinek)

This subspecies is known to breed in south and eastern Asian countries such as India, Japan, Korea, China, Indonesia, and Mongolia. During the winter months it migrates down to areas of the Philippines and Indonesia. It is distinguishable from its Europeans cousins as it tends to be smaller and size and has brighter plumage. This is the subspecies found in Singapore. 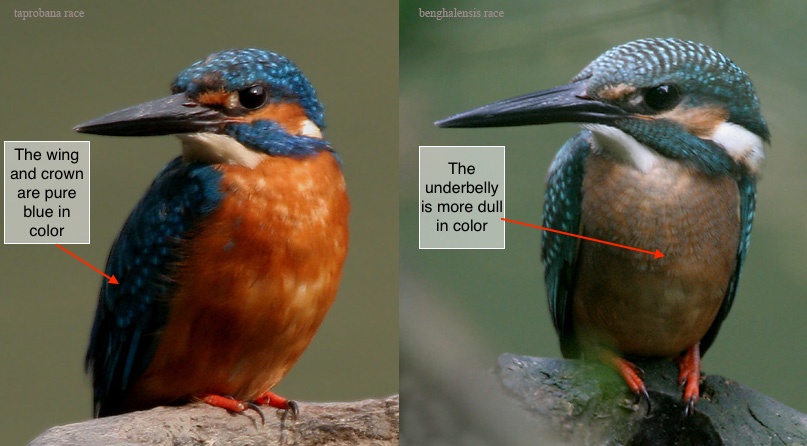 Figure 3: This is a figure, adapted from Wikipedia Commons, clearly showing the physical characteristics which can be used to distinguish the two subspecies of kingfisher which breed in South India.

This subspecies is a resident breeder in Bali and Timor, meaning that it does not migrate during the winter months as the temperatures in these regions do not fluctuate heavily. It closely resembles the taprobana subspecies but can be distinguished using the plumage on the ear patch.

This subspecies is a resident breeder found on islands from Sulawesi to the Western Pacific islands. It can be distinguished from the subspecies breeding in Bali by the color of the ear patch (light blue) and rump (purple)

Figure 4: A comparison of two subspecies of common kingfishers found in South East Asia, adapted from pictures from the internet. See the development section for information on female/male distinctions. Credit to Dave Behrens 9 for the photo on the right. The photo on the left came from www.taenos.com 10

Given all the information about the variation between the subspecies of Common Kingfisher based on plumage color, it seems prudent to mention how exactly this dazzling coloration comes about. According to the paper by Stavenga et al., the coloration in Common Kingfishers is caused by 3 structural features: thin films, spongy nanostructures, and pigment granules. These all exist within the barbs of the feathers, which are different in different areas on the birds body depending on what color of light they are scattering (blue, orange, etc.)11

The Common Kingfisher can be found throughout most of Europe, Africa and Asia12 . Due to its incredibly large range and local abundance, it is considered a species of "least concern" on the IUCN (International Union for Conservation of Nature) list13 . In the European part of its range, it is often found to be the only species of kingfishers. They are however sensitive to dream and river pollution14 . 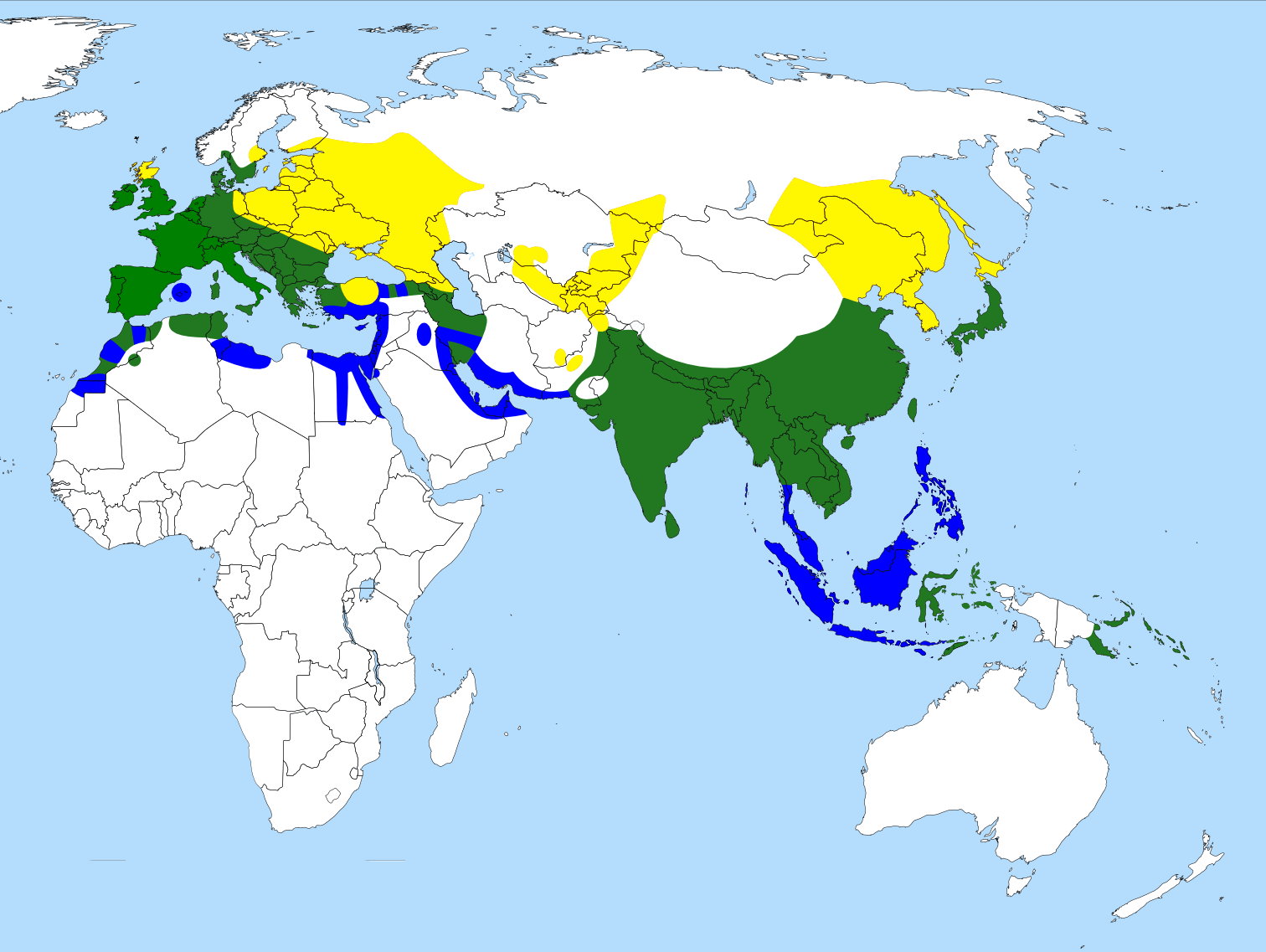 Figure 5: This is a summary of the distribution of all the seven subspecies of Common Kingfisher. To allow the figure to remain readable, the distribution of each of the separate subspecies has not been marked on this map. The green areas represent resident (all-year) breeders while the yellow represents the breeding areas temporally used by Common Kingfishers who migrate to warmer climates during the winter. Lastly the blue areas represent areas where Common Kingfishers can be found for parts of the year but these are location in which the Common Kingfisher does not breed, normally because it is not present in these areas during the breeding season. Photo taken from Wikipedia Commons.

The Common Kingfisher spends most of its time around the area where it finds it prey (lakes. streams, ponds, lakes). It tends to make its nest close to these areas and in many cases the main nesting areas for kingfishers is the riverbanks15 . However, Common Kingfishers are not restricted to freshwater environments and have been found in near saline environments such as saltwater mangroves. They may in the winter months switch to brackish waters especially in the northern hemisphere where the freshwater bodies of water may be frozen over and therefore unsuitable for the capture of prey.

There is very little data on the Common Kingfisher in Singapore as it is one of the less watched for birds in the area, especially compared to its close relative, the Collared Kingfisher, which has a greater prominence in Singaporean society. Therefore, it is very difficult to find good quality images of this species in Singapore, so the wildlife photographers out there need to step it up!

Common Kingfishers are a monogamous species, meaning that they only have one reproductive partner in each mating season. Bear in mind that it has been shown that many monogamous species in birds, as well as other animals, some individuals participate in extra-pair mating. Common Kingfishers are known to be a solitary species for its entire lifespan except during mating and breeding season. When trying to fin a partner, males will chase females through the trees producing a loud whistle, presumably to convince the females that they make a good partner. The breeding season runs from April to October and allows for 2-3 clutches per year depending on whether the pair can raise the first two clutches fast enough to have time for a final clutch in early October. Females will lay an average of six eggs per year. Before the breeding season, around March, the nest is built as a hole of varying depths (15-30 cm) out of rock, clay or soil. 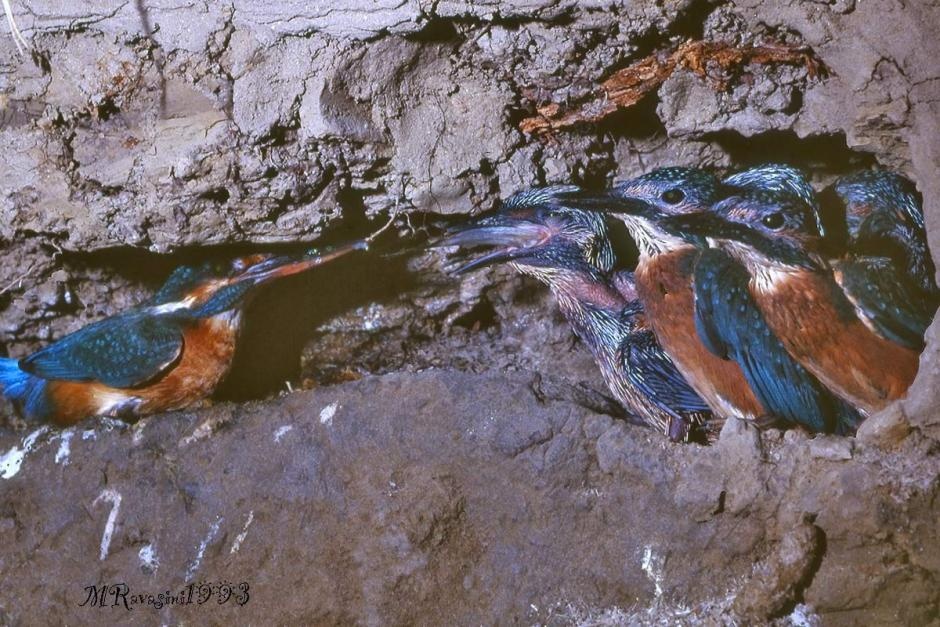 Figure 6: A female Common Kingfisher feeding its young in the nest. These young are almost fully fledged and will soon start waiting at the entrance of the nest for their mother to bring them food. Credit to Mr. Ravazini for the insightful photograph10 .

Once the eggs are laid, the time to hatching varies from 18 to 21 days. Both parents will invest time incubating the egg but the female tends to do most of the work with regards to brooding the young. After the young hatch, the parents go out of the nest and bring back fish, holding it by its tail and feeding it to its young. The young take an average of 25 days to become fully fledged before they leave the nest16 .

Juveniles of the Common Kingfisher have the same coloration as the adults but are markably duller and paler in regards to plumage. Males and females differ in plumage within the same subspecies, so for identification purposes, if sexing is not feasible, the ear patches tend to be the simplest and most effective way of distinguishing between subspecies of kingfisher found in the same area. 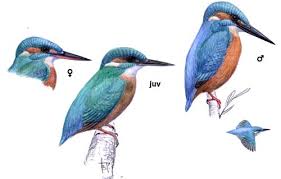 The average lifespan of a Common Kingfisher in the wild is approximately 7 years but the longest recorded is a staggering 21 years!17 With that amount of wisdom that kingfisher should have considered a career change and become a full-time owl.

The Common Kingfisher generally is very territorial and has its own favorite perch from which it spots its prey in the river or pond on which it feeds18 . It has a large range of diet from fishes to water beetles, as well as tadpoles and other large aquatic insects1 . When it has spotted prey in the water it will go from its perch, plunge into the water and emerge with its prey in its mouth which it then carries to a different perch for crushing and subsequent feeding19 .
The shape of the beak is very important to its feeding behavior because it is under different selective pressures compared to the beaks of other birds. For other birds, the beak morphology is mainly governed by the food it eats, as one would expect even the beak is used for feeding. However, since the Common Kingfisher needs to dive into the water to capture its prey, the beak must be such a shape that it reduces drag in the water and the amount of splash, allowing it to be faster underwater and capture its prey more successfully.

The Common Kingfisher does not have a specific mating call but does use a sharp chirping sound to signal danger. A recording20  can be found below:

Additionally you will find a video below which shows several interesting behaviors of the Common Kingfisher including its call:

This species was first described by Carl Linnaeus in 1785 as Gracula atthis while the modern binomial (Alcedo atthis) is derived from the Greek word for kingfisher (genus) and the species name is that of the favorite muse of the Greek poet Sappho.

A study in 2007 used sequencing of mitochondrial and nuclear genes to determine the phylogenetic between the members of the family Alcedinidae which show interesting shifts in bill and plumage color, which were originally used by taxonomists to group the members within the family. The result is represented in the figure below and the Common Kingfisher is highlighted. The bootstrap values of the different nodes are displayed on the trend show that the Alcedo genus has very well defined relationship between its members. Interestingly, as we can see on the diagram, this analysis shows that both the Ceyx and Ispidina genus are not monophyletic22  and therefore it could be argued that some of the organisms analyzed here should have their genus appropriation changed. 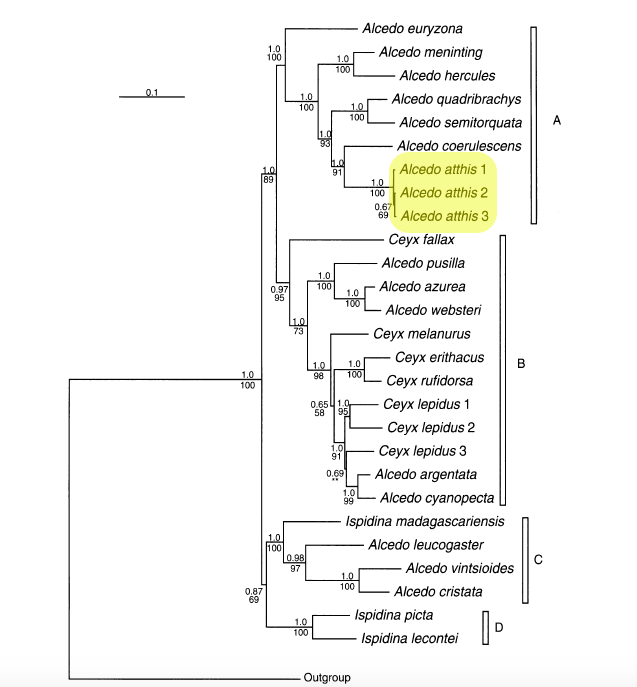 Figure 8: This figure shows the relationship of the the Common Kingfisher to other members in its family. The cluster is made of Common Kingfishers from three different localities representing the major areas where this species can be found (France, Mongolia, and Suwalesi). Adapted from Moyle et al., 2007

There are in fact two different families of kingfishers other than the Alcedinidae family and those are the Daceloninae and Cerylidae families23 . The relationships between the members of these groups has been investigated and is shown below: 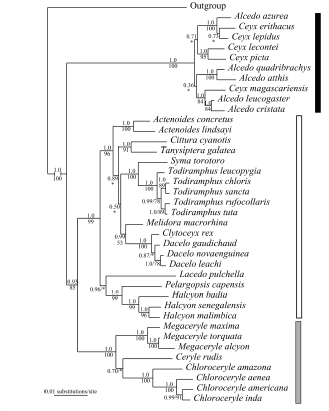 Figure 9: The three families are represented by different bars. The black bar is showingthe Alcedinidae family, the grey bar represents the Cerylidae family, and the clear barshows the Daceuloninae family. Adapted from Moyle et al., 2006

This page was authored by Vincent Rennie
Last curated on 2015