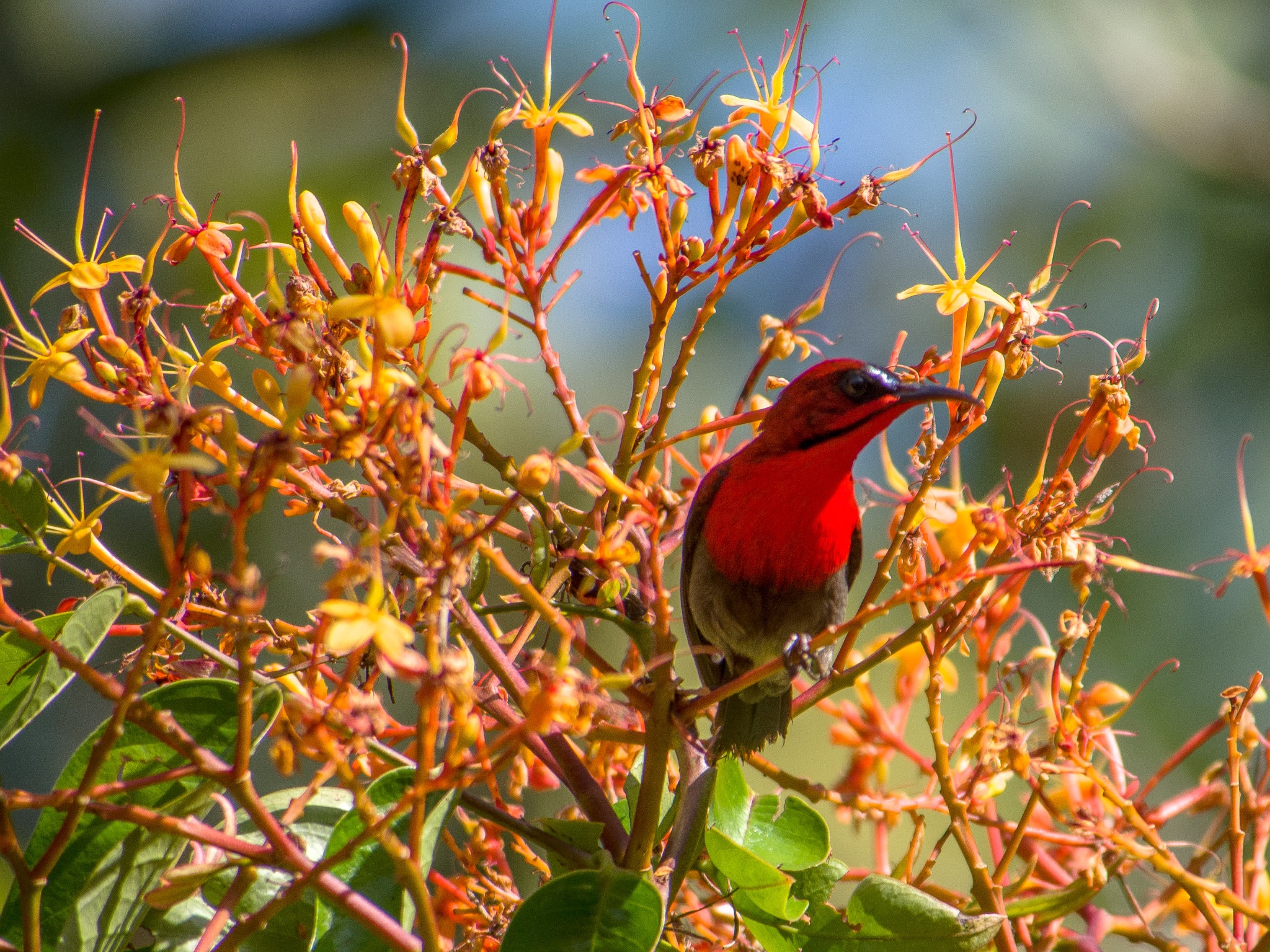 The crimson sunbird is a tiny sunbird that belongs to the family Nectariniidae. It can be found in the tropical regions of southern and south-eastern Asia, ranging from north-western India to eastern Indonesia. Its preferred habitats are forests and plantations. It is generally nectarivorous, but may also feed on insects1 .

In 2002, the crimson sunbird received the most votes to be Singapore's national bird in a poll started by Nature Society Singapore (the white-bellied sea eagle came second). Voters felt that its small size and bright red plumage were good representatives of the country. On 1st November 2015, Dr Shawn Lum, president of Nature Society Singapore, publicly announced that the crimson sunbird had been declared the national bird of Singapore. The following day, however, Dr Lum clarified that this was not official and was still pending an agreement with three government departments. This remains the case till today 2 .

Crimson sunbirds and other sunbirds are often mistaken for hummingbirds due to their similar appearance in terms of size and colouring. However, this is actually a result of
convergent evolution, as both fulfil similar ecological niches by feeding on nectar and therefore play a key role in pollination. Sunbirds and hummingbirds are not closely related at all - hummingbirds' closest cousins are actually swifts and nightjars3 . In addition, sunbirds and hummingbirds do not coexist anywhere in the world. Sunbirds are found in Asia, Africa and Australia while hummingbirds are found only in North and South America4 . So the next time you're confused as to whether a bird you've seen is a sunbird or a hummingbird, all you have to do is know which continent you're on!

Etymology describes how a species got its scientific name. For the crimson sunbird, the Latin species epithet siparaja was given to it by Sir Stamford Raffles based on the Malay name 'burong sepah raja'. 'Burong' translates to 'bird', 'sepah' refers to the sweet juice of the betel nut, and 'raja' means 'king'5  .

The crimson sunbird occupies a large variety of habitats. It can be found in various forest types (eg. riverine, peatswamp), typically at the forest edge, but also in more open areas such as grasslands, scrub, mangroves, woodlands, parks or gardens. With regards to altitude, it is usually found at heights of below 915m, but can be found at altitudes of 1,690m in Bhutan and 1,800m in Nepal during the summer6  . Below is a video of a male crimson sunbird in MacRitchie Reservoir:

Crimson sunbirds may forage either low or in the canopy; singly, in pairs or in larger family parties. Males often sing from exposed branches in the canopy and can get extremely aggressive with each other as they often establish feeding territories on flowering shrubs or trees. Crimson sunbirds can also reduce their metabolism at night depending on the ambient temperature (reduce by 54% at 5°C, and 62% at 25°C)6 .

The crimson sunbird feeds primarily on nectar. It seeks out flowers with high sugar content and pierces the base of the corolla6  to get to the nectar directly. It plays an important ecological role in pollination, as many native flowering plants rely on sunbirds for this purpose. Many plants have tubular-shaped flowers that actually exclude other pollinators such as bees from feeding on them, just so that the crimson sunbird can do so. The crimson sunbird may also feed on insects and spiders during the breeding season to feed its young1 . 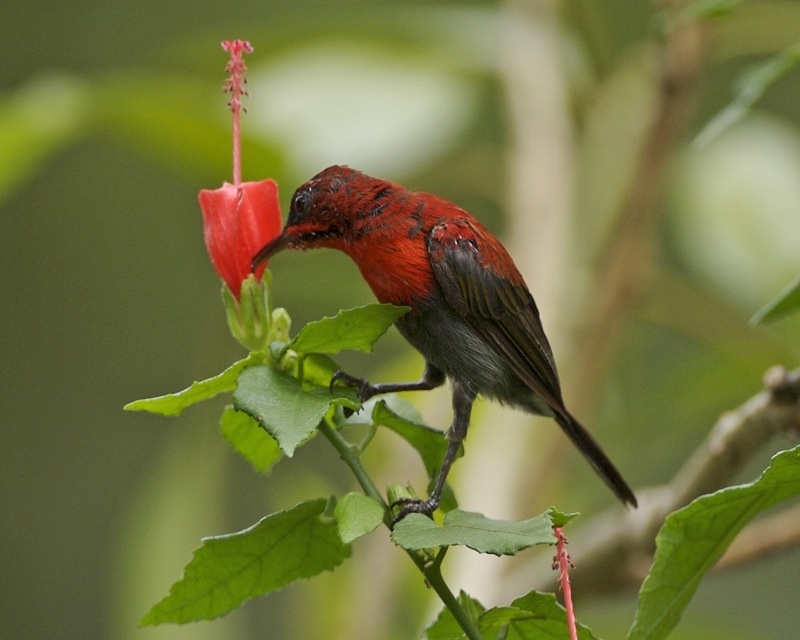 Figure 2. Photo of crimson sunbird feeding on nectar. Notice how it pierces the base of the corolla to get to the nectar directly. Photo taken by Lip Kee (2007) ©

The male crimson sunbird is known to perform a mating display, during which it not only sings, but also fluffs out its tertial feathers to display its yellow rump which usually remains unexposed. Watch it in the video below:

The nest of a crimson sunbird couple is usually attached to palm fronds. It is made of vegetable down, cobweb, grass, roots, and may be found under overhanging banks, such as in Gunung Kinabalu, Sabah6 .

Egg-laying months are typically March and April. One to three eggs are laid at a time. Eggs are of variable colouring, but are usually pinkish and sporadically marked with dark reddish-brown spots6 .

The crimson sunbird is a host to Leucocytozoon sp., a group of intracellular blood parasites of birds. Leucocytozoon sp. are known to parasitize other sunbirds, as well as at least three other families: Lybiidae (barbets), Picacthartidae (junglefowl) and Pycnonotidae (bulbuls). However, the exact relationship between the birds and the parasites is yet to be determined7 .

The crimson sunbird is tiny - an adult is only 11cm long on average. It has a thin, down-curved bill of medium length and a brush-tipped tubular tongue, both to facilitate nectar feeding1  . It also displays sexual dimorphism, with males having the bright crimson colour that gives the bird its vernacular name, and females being more drab. This can be seen from Figures 2a and 2b, which indicate distinctive features of the male and female crimson sunbird for identification purposes. Table 1 below the two figures presents a more detailed description and comparison between the male and the female, and also includes features of the male in eclipse phase - where it has temporary dull plumage after breeding. 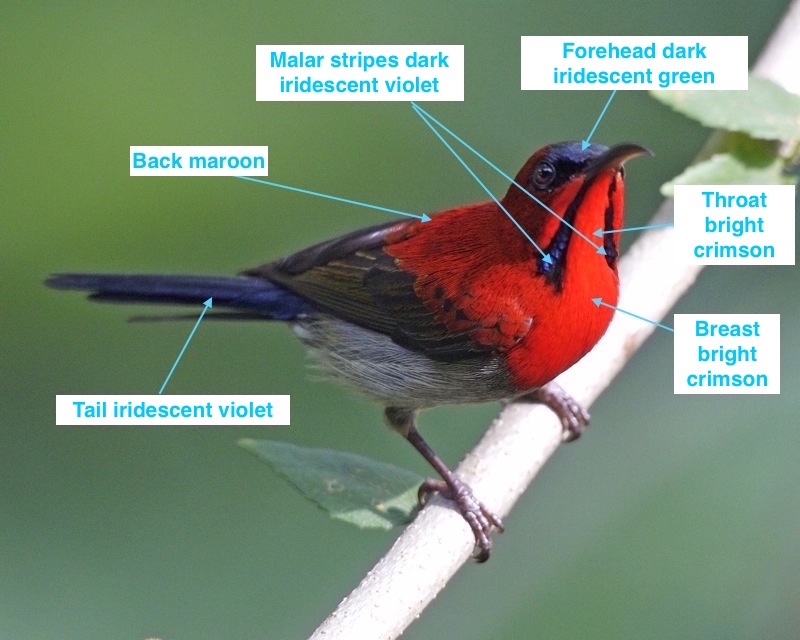 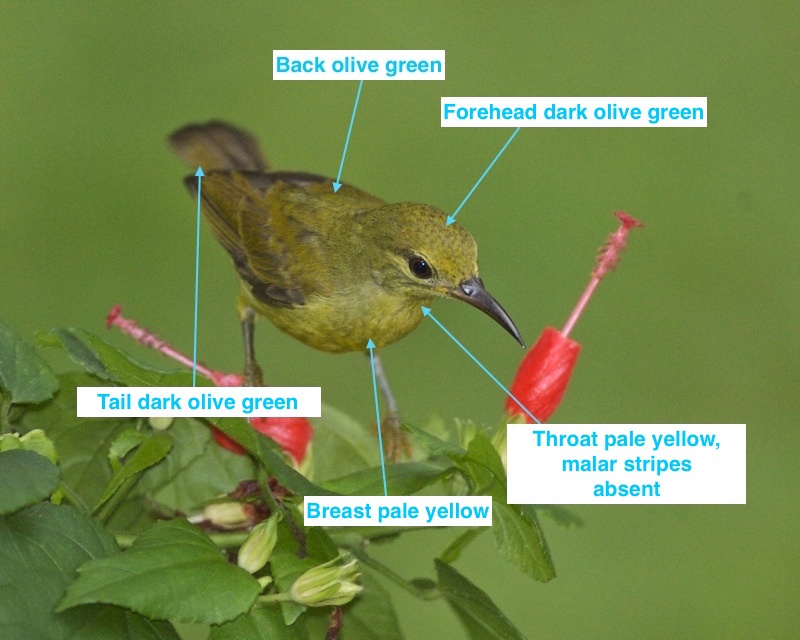 The crimson sunbird is exclusively a resident of southern Asia, but has an extremely large range within that area - its estimated extent of occurrence (EOO) is 4,920,000 km2. Its range covers countries such as India, Bangladesh, China, Myanmar, Thailand, Malaysia, Singapore, the Philippines and Indonesia. It has been described as usually common in all those areas, with the exception of Buton Island in Indonesia, where it is described as uncommon or rare10 . Figure 4 below shows the range map of the crimson sunbird (demarcated in yellow).

The crimson sunbird is not under any conservation threat in Singapore either. It is listed as 'common' in the 2015 Checklist of the Birds of Singapore compiled by Nature Society Singapore12  , as well as the Singapore Red Data Book13 .

...mostly for the biologists :)

The protonym of the crimson sunbird is Certhia siparaja14

. It was first described by Sir Stamford Raffles in 1822. This description was printed in the Transactions of the Linnean Society of London15

Figure 7. Screenshot of the original description of the crimson sunbird (Certhia siparaja) from The Transactions of the Linnean Society of London.

The type specimen of the crimson sunbird was collected in 1872, and is now located in the Natural History Museum of London16 . Details of the type specimen are shown in Figure 8 below. 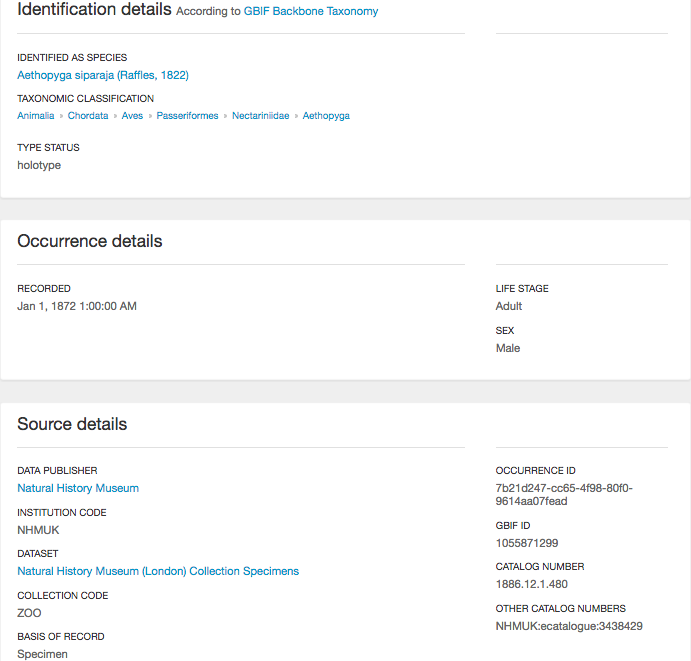 Figure 8. Screenshot of details of the crimson sunbird type specimen

Below is the taxonomic classification of the crimson sunbird. Taxonomic ranks are not included as they may not provide objective taxonomic information. For more on this, click here.

The crimson sunbird is a polytypic species. Its 15 subspecies are listed in Table 3 below1 . Aethopyga siparaja siparaja is the only subspecies found in Singapore18 .

Table 3. Description of subspecies of the crimson sunbird and their distributions.

The order Passeriformes can be split into New Zealand wrens, suboscines and oscines (commonly referred to as songbirds). The crimson sunbird belongs to the oscines. Figure 9 below illustrates the position of the crimson sunbird in the Total Evidence Nucleotide Tree3 . (In reference to Section 1.3, the position of hummingbirds is illustrated as well, showing how distant the relationship between sunbirds and hummingbirds actually is.) 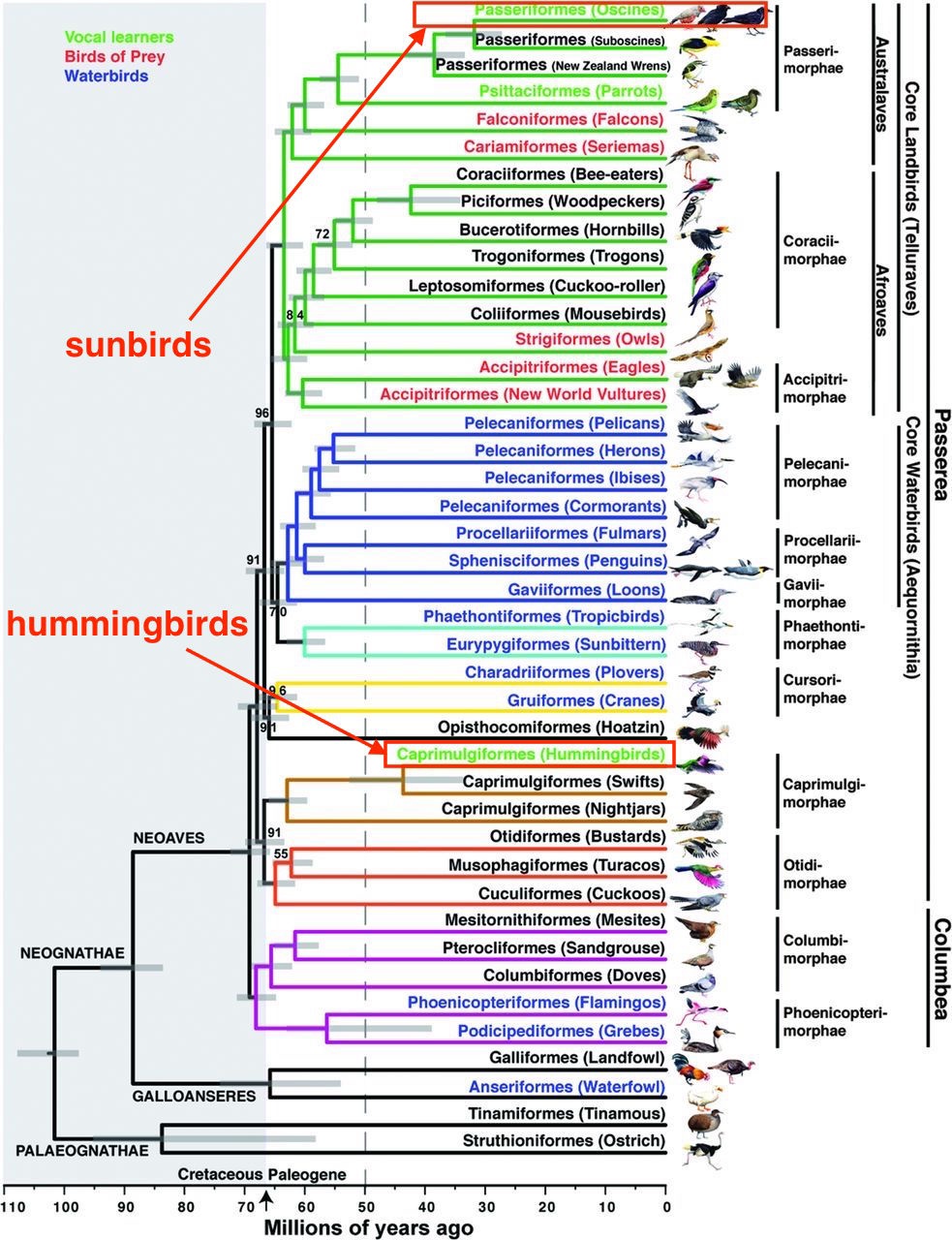 Within the oscines, there are three superfamilies - Sylvioidea, Muscicapoidea and Passeroidea. Ericson and Johansson (2003)19  sequenced multiple nuclear and mitochondrial genes and analyzed the data via parsimony jackknifing and Bayesian analysis to obtain four main clades, as shown in Figure 10 below. 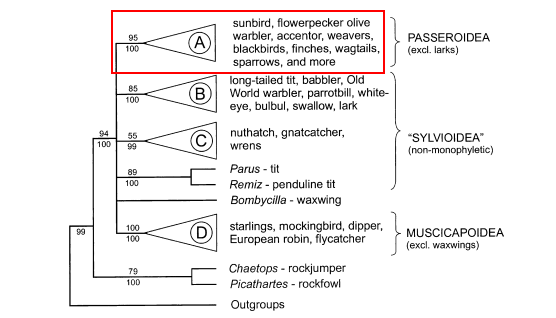 Figure 10. Simplified phylogenetic relationships among the oscines, by Ericson and Johansson (2003). Edited by Chai Wen Xuan

Monophyly of this clade is supported in both parsimony jackknifing (94%) and Bayesian analysis (100%), and the maximum likelihood tree in Figure 11 below shows that the Aethopyga sunbirds are the first outgroup, together with the flowerpeckers19 . 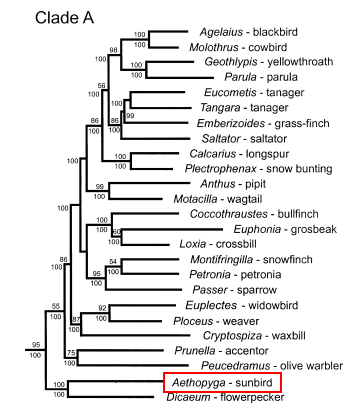 Figure 11. Maximum likelihood tree by Ericson and Johansson (2003) illustrating split of Aethopyga from the other genera in clade A. Edited by Chai Wen Xuan

Hosner, Nyári and Moyle (2013)20  then reconstructed the phylogenetic relationships within the Aethopyga genus through further mitochondrial and nuclear DNA sequencing. They used maximum likelihood ancestral state biogegraphical reconstructions to examine the ancestral distribution and colonization history of Aethopyga. To determine whether the diversification at each node occurred within a continent, across a shallow-water barrier, across a deep-water barrier or within an island, they used statements based on the phylogeny, current distribution of species and bathymetric reconstructions. Ultimately, they derived the position of Aethopyga siparaja, as shown in Figure 12 below. 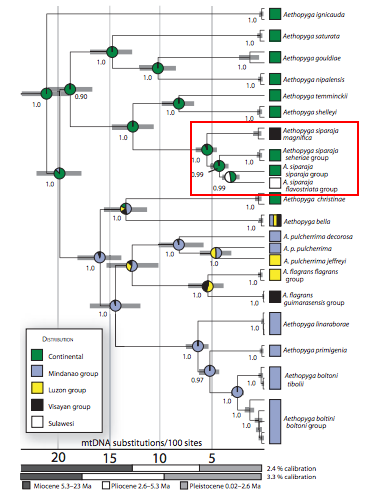 However, the figure also shows that Aethopyga siparaja could be treated as a complex of geographically separated species (or allospecies). The most obvious example would be the subspecies Aethopyga siparaja magnifica (mentioned as possibly a separate species in Section 8.3 above) which appears to be the sister group of all the Aethopyga siparaja subspecies. Prior research on isolation21 , as well as molecular results22 , has supported the placement of A. s. magnifica as a separate sister species to all other A. siparajasubspecies. Further splits within A. siparajamight be warranted but similarly rigorous experimentation and DNA sequencing will first have to take place.

Genbank contains many nucleotide sequences for the crimson sunbird, such as the NADH dehydrogenase subunit 2 (ND2) gene, NADH dehydrogenase subunit 3 (ND3) gene, recombination activating protein 1 (RAG1) gene, ornithine decarboxylase (ODC) gene and the cytochrome b (cytb) gene. They can be found here. However, do note that they are not official barcodes as they were not sequenced from the cytochrome c oxidase I (COI) gene.

nectarivorous: feeds mainly or exclusively on nectar
convergent evolution: the process whereby organisms that are not closely related develop similar traits, due to them adapting to similar environments and ecological niches
ecological niche: the specific role a species plays in its environment
sexual dimorphism: a distinct difference in size or physical appearance between both sexes of the same species
heterospecific: of a different species (opposite: conspecific)
sibilant: characterized by a hissing sound
extent of occurrence: total surface area over which a species can be found naturally
protonym: unofficial (usually first) name for a new species
type specimen: the individual specimen (or set of specimens) on which the description and name of a new species is based
polytypic: contains more than one taxonomic category of the next lower rank (opposite: monotypic)